Hillary and the court

How an upcoming ruling on partial-birth abortion could send shockwaves through the New York Senate race. 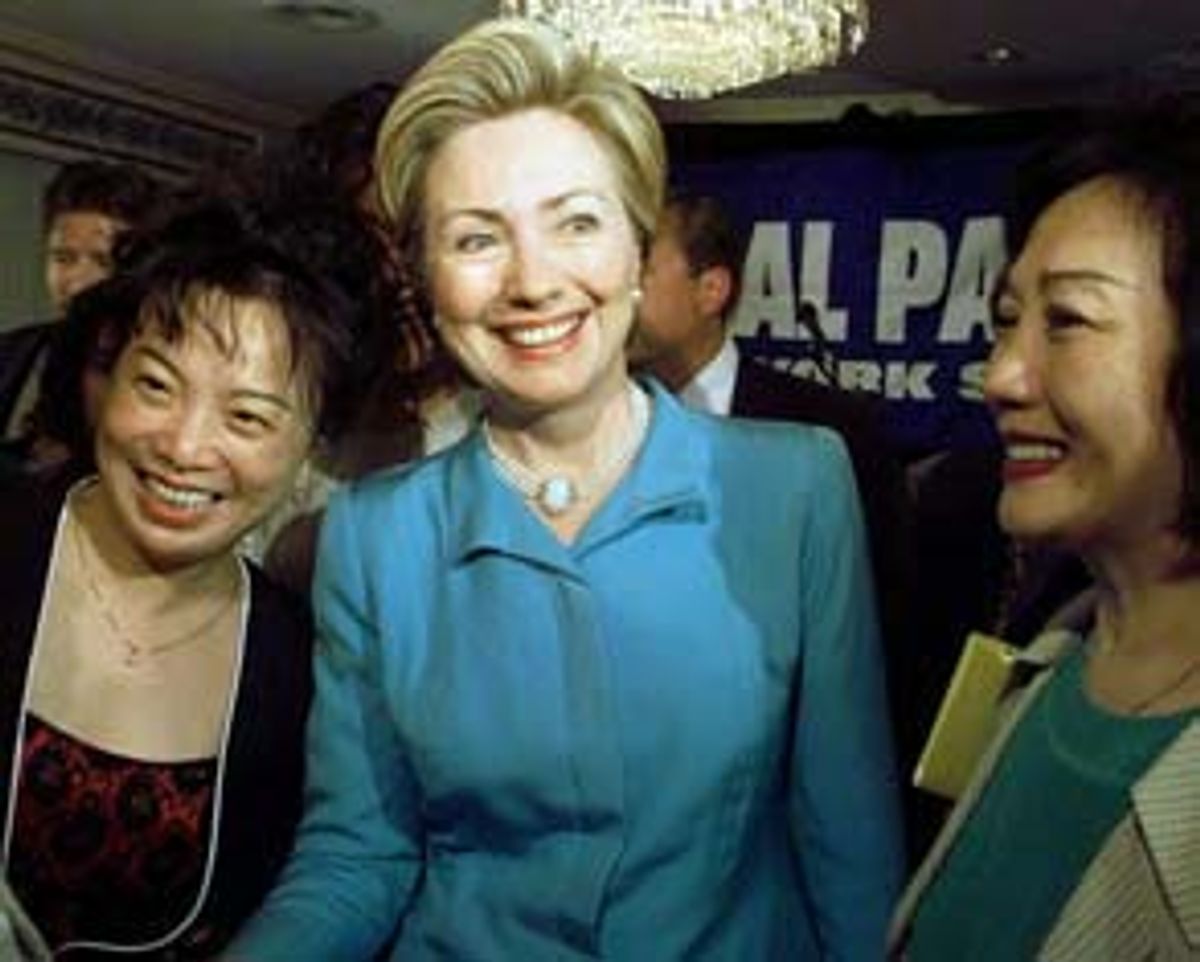 Within the week, perhaps as early as today, the U.S. Supreme Court is expected to decide the legality of a Nebraska law criminalizing the procedure commonly known as "partial birth" abortion. Regardless of what the court ultimately decides, the ruling is likely to play a significant role in the increasingly heated U.S. Senate race between Hillary Rodham Clinton and Rep. Rick Lazio.

Unlike the debate on the national level -- or in so many other states -- New York's Senate race is no mere contest between a decidedly pro-life Republican and a proudly pro-choice Democrat. Rather, in this heavily pro-choice state, the contest is between two pro-choice candidates. And like so many New York races in recent years, it is already featuring efforts by a Democrat to prove that the allegedly pro-choice Republican is, in reality, a threat to abortion rights.

In this race, Clinton has already leveled criticism at Lazio based on his abortion stance. Lazio claims he is "pro-choice," but his voting record on the issue is decidedly mixed. He is opposed to Medicaid funding for abortions, opposes the so-called "partial birth" procedure, and voted to prohibit women in the military from receiving abortions in military hospitals -- even if they offer to pay for it privately.

"Americans have a great number of rights that are not subsidized by the federal government," said Lazio spokesman Dan McLagan. "This is an instance where he supports a woman's right to choose, but doesn't support public funding. You have a right to go and get a driver's license, but it doesn't mean the government is going to go and get you a car." Asked how abortion differs from the numerous other medical procedures that are eligible for public funding, McLagan replied, "He just doesn't believe that it's appropriate for the taxpayers to fund abortions."

At a fundraising breakfast at the Waldorf-Astoria in Manhattan on Wednesday, Clinton denounced Lazio on this very issue. "When it comes to a woman's right to choose, I know that my opponent calls himself pro-choice, but if you look at his record, he's apparently pro-choice for rich women," she said to the overwhelmingly female crowd.

"I'm committed to supporting Roe vs. Wade," she added to loud applause. "Not just in rhetoric, but both with my voice and with my votes on behalf of any nominee to the United States Supreme Court because that is where the fight will be waged."

And that, according to one Clinton advisor, is where her campaign plans to hammer away at Lazio, who has declared he will not use support for Roe vs. Wade as a basis for voting for a Supreme Court nominee.

"I think you get the groups -- the NARALs, the Planned Parenthoods -- to go out and make the case that he can't be counted on," said one Clinton campaign advisor. "I think the big issue which will make or break this is the Supreme Court justice issue, because by the time the fall rolls around, I think it will become clear that the next senator will vote on Supreme Court justices."

Jim Chapin, a historian and occasional advisor to New York City's Public Advocate, Democrat Mark Green, said that Clinton's abortion strategy may be most effective for its connection to what could ultimately be the decisive factor in the campaign: She is a Democrat in a state where the Democratic presidential candidate is expected to win in a landslide.

"She's trying to use abortion to tap into the partisan linkage. Remember, Gore is going to win the state by a million votes or more," said Chapin. "Hillary wants to nationalize this race. What Lazio wants to do is localize the race."

So while Lazio continues to hammer Hillary on the carpetbagging issue, Clinton continues to paint her opponent with the widest of brushes as a right-wing extremist. Though Lazio voted for the Brady Bill, which requires local vendors to conduct a background check on anyone who wants to buy a handgun, Clinton has criticized Lazio for not supporting registration of all new handguns. "Apparently he is more willing to go along with the Republican leadership and the NRA than the children and families of New York," she said.

Abortion is a linchpin to that strategy. Kelli Conlin, the executive director of NARAL/New York, said that her organization plans to wage a campaign to force Lazio to take a position on Supreme Court nominees who have publicly opposed Roe vs. Wade.

A pair of recent polls, however, offer varying evidence as to just how important voters will find this issue. According to the Quinnipiac University Poll released in early June, half of New Yorkers think abortion should be "generally available to those who want it." The same poll found that 34 percent think there should be "stricter limits" on the procedure. (Only 13 percent of the state's residents think it should not be permitted at all.)

That support for abortion grows slightly in the suburbs (to 60 percent) and shrinks among upstate voters -- who are considered among the most important swing voters in this election -- to 38 percent.

A more recent New York Times/CBS News poll found less support for abortion on demand and more support for more restrictions. The Times/CBS poll also found that New Yorkers are divided -- 44 percent for and 45 percent against -- on the issue of public financing for abortion.

That's a lot of numbers, but does it tell us anything about whether people might actually choose to vote for one of these people based on their abortion stance? Well, that's unclear. The two polls offer strikingly different figures on how important an issue New Yorkers consider this to be.

According the New York Times/CBS poll, 63 percent of respondents said that their candidate's position on abortion was the most important single issue for their vote. But when the Quinnipiac poll asked voters to name the issues or problems that they want to hear Lazio and Clinton discuss -- without specifically mentioning abortion -- it ranked a distant 7th -- behind things like education, taxes and healthcare.

And observers are divided on a central question: Will voters find it sufficient if Lazio says he is pro-choice? Or will a detailed critique of his position by the Clintonites hurt him? Or, oddly, could it hurt her?

"I think the typical swing voter probably agrees with him," said one Democratic analyst of Lazio's pro-choice-with-major-restrictions position.

"Republicans get stigmatized by being threatened on the issue of abortion," said Republican consultant Kieran Mahoney. "That stigma doesn't work if you're multiple-choice. The conclusion is that you're not rigid, you're not an ideologue. Going after him for being against partial birth and some forms of funding is not gonna work. I think the only people you're going to get [by attacking him] is some hard-core Democrats, by and large" who will vote for Clinton anyway. Indeed, in the last few years, several local New York races have featured Democrats questioning their Republican rivals' pro-choice bona fides.

But the effectiveness of these attacks has never been entirely clear. In 1994, then-Gov. Mario Cuomo attacked George Pataki for his apparently changing views on abortion over the years. But Pataki won anyway (albeit against a deeply unpopular incumbent). In 1998, Chuck Schumer unseated the longtime pro-lifer Al D'Amato, attacking his abortion stance near the end of the campaign. But D'Amato had successfully run three times before that, and even Democratic political operatives acknowledge that -- since Schumer won by more than 10 percent -- it's nearly impossible to gauge what role the abortion attacks played in Schumer's victory.

Republican consultant Roger Stone is skeptical of the Clinton strategy, but said that Lazio cannot continue to let Clinton frame this debate. "It depends on whether he drives the right message," said Stone. "If she keeps riding along on the Supreme Court, and Rick says nothing, he could get hurt. But he if says it's not about that, it's about partial birth or about parental consent, then he could jam her. It's a shouting contest."

Finally, there may be some question about whether Lazio is the only "multiple-choice" candidate here. In a 1992 interview with WNYC radio's Brian Lehrer, Clinton said she supported laws requiring that parents be notified -- although not that they provide consent -- before a minor seeks an abortion.

"I favor parental notice," she said in 1992, "because I view it as a way of trying to keep a family together wherever that is possible. And I recognize that in many instances, there has been a breakdown in the family relationship, and that a young woman might better be served by seeking the advice or counsel of a preacher or a teacher or another family relative." According to campaign spokesman Howard Wolfson, Clinton now does not support such laws, and would vote against such restrictions as a senator.

Wolfson contended that Clinton -- who, unlike Lazio, has no voting record to worry about -- had not merely flip-flopped to appease pro-choice New York voters. Her opinion in 1992, he argued, was in the context of a debate in Arkansas between a parental notification bill and a parental consent bill. (Clinton was also quoted in an interview with the New Republic from late 1992 supporting parental notification -- with no mention of the Arkansas debate.)