An odd rumination on the final remarks of the world's luminaries, coupled with a spirited defense of the much-maligned sandwich invented by Elvis' recently deceased cook. 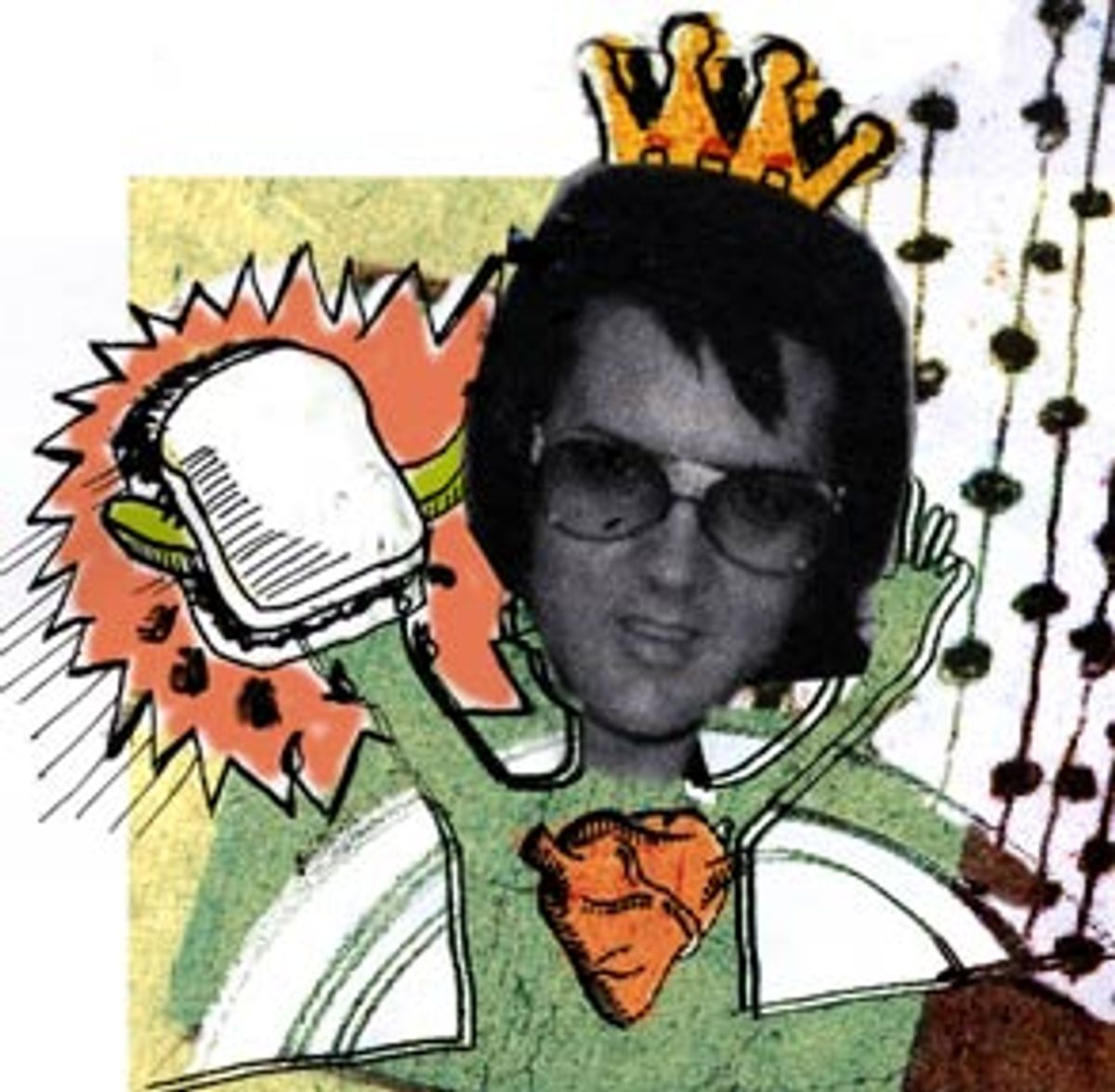 According to the Syrian government, the last person to speak with Syrian President Hafez Al-Assad before his death June 10 was Lebanese President Emile Lahoud. "His last words," Lahoud reported, "were: 'Our destiny is to build a better future for our countries, a safe future for our children. We have to give them something better than what we inherited.' And then there was a sudden silence."

That must be when the piano landed on him. The official cause of death was said to be heart failure, which is possible too -- bad things happen when you forget to stop and take a breath. Certainly, we can rule out cancer of the tongue.

Good thing Lahoud knew shorthand. Whatever it was that finally silenced the Middle East strongman, at least they didn't strike up the band before he got through the big soliloquy. Not everyone is so lucky when the curtain drops. Contrast Assad's stirring valedictory address with Tallulah Bankhead's final words in 1968. "Codeine," she reportedly muttered. "Bourbon."

In a brief speech after being run over by a crosstown bus, America Online CEO Steve Case sounded upbeat. "I believe this unexpected merger will take me to entirely new levels," he enthused. "My bargaining position is excellent."

And in a somewhat less brief speech, just before falling victim to an unexplained bug, Bill Gates remarked, "This unwarranted intrusion by Big Brother will severely restrict my ability to thrive on innovation and honest competition. I am being asked to reveal my source code without financial reimbursement. My lawyers will appeal."

Al Gore has passed away. Cause of death was failure to thrive. "I look forward to meeting with the controlling legal authority," said the vice president.

"This is huge. Unbelievable!" declared Donald Trump, fatally choking on the newest entree at Dean & DeLuca. "My death will create tremendous shock waves. Incredible! The Boss will play the funeral. Fantastic! OK, I'm dead. Now what?"

"Whoa, what is this, some kind of quiz?" muttered George W. Bush from the depths of an unexplained coma that was definitely not caused by any previous illegal activity. "Let my opponents dwell in the past. My conscience is clear."

A peanut butter and banana sandwich is a glorious thing

Can a person's historical importance be gauged by the amount of obituary time he or she gets on CNN? If so, Assad beats Mary Jenkins Langston cold. But Langston, who died of complications after two strokes on May 30 in Memphis, Tenn., played her part, too. From 1966 until 1977, she was Elvis Presley's cook. Someday, perhaps, some history professor will conduct a class on the role of Syria's president in late 20th century Middle East politics. That class will be nearly empty. Most of the students will be next door, debating the hottest topic in late 20th century studies: How did Langston stay out of the electric chair?

Alas, the Langston trial was never held. It would surely have been a mini-Nuremberg, with the defendant in the dock protesting, "I merely followed orders." And the orders kept on coming. Chicken-fried steaks and cheeseburgers, pigs' feet and meatloaf -- just about anything that could be caught by the leg and stuffed with bacon was delivered upstairs to Presley, no doubt sitting in front of the TV, pistol in hand, waiting for Robert Goulet to show up. There were no guns vs. butter debates at Graceland -- Elvis came down heavily in both camps. In the 1996 BBC documentary "The Burger and the King," Langston described watching her employer eat. "He'd have butter running down his arms," she said.

No other treat was as famous, or as buttery, as the fried peanut butter and banana sandwich. Now that the principals in this sad culinary tale have passed, it is time to rescue a noble and perfectly healthy comestible from the greasy netherworld to which history has banished it. Like snakes or politically active Buddhists, the peanut butter and banana sandwich has been hit with a blanket of fear and condemnation merely for the sins of a few.

The legendary snack was Elvis' idea. As Langston later recalled, she tried five variations, all of them failures, before Elvis' father, Vernon, suggested toasting the bread first. It was a crucial turning point. Before the toasting breakthrough, Langston's attempts had proved soggy. This was understandable -- the Elvis method required two sticks of butter in the frying pan for every three sandwiches. "You'd turn it and turn it and turn it until all the butter was soaked up," she explained. "That's when he liked it."

Ever since the King toppled from his throne, suffering from a midtown-Manhattan-style gridlock of the cardiovascular system, writers have pointed an accusing finger at fried PB&Bs. This despite the obvious fact that, broken into its constituent parts, the peanut butter and banana sandwich represents nothing but wholesome goodness. Graham crackers can kill you, too, if you crumble them up and put a cheesecake on top.

For as long as I can remember I've started my day with three peanut butter and banana sandwiches -- no more, no less. Multigrain bread, sugarless peanut butter, perfectly ripe bananas thickly sliced in rows -- them's good eatin', and a powerful meal that can kick you all the way through to late afternoon. Nowhere does it say that these nutritious concoctions must become deep-fried delivery systems for myocardial infarction.

Is it the peanut butter that scares you? Bah. Yes, it contains fat, but not the nasty saturated stuff that provides livestock with posthumous vengeance on its executioners. Nuts and legumes are staples of wise nutrition -- just ask our woodland friends. Personal observation bears this out. While dishes of ice cream or coconut milk curries will leave me with a spare tire fit for a Mack truck, my daily consumption of mashed peanuts, fresh fruit and whole-grain bread keeps me obnoxiously trim.

When making your peanut butter and banana sandwich, remember to use lightly freckled bananas; green ones are a gustatory scandal on a par with mushy pasta and overcooked vegetables. Also, it's a good idea to pour off any excess oil that has collected atop the peanut butter jar. Finally -- and this is important -- do not under any circumstances top off your sandwich with a pound of hot, dripping bacon fat. Elvis was reportedly of the opinion that there was no dish in the world that couldn't be improved with a heap o' bacon. Legend has it that he would fly to Glendale, Colo., just to visit the Colorado Gold Mine Company restaurant. There he would order the Fool's Gold loaf -- an entire Italian bread loaf slathered in butter and hollowed out to contain a jar of Skippy peanut butter, a jar of Smucker's grape jelly and a pound of fried bacon.

Think of the Colorado River, frothing white and treacherous as it reaches a narrow passage. So too were the majestic arteries of the King -- blood screaming through the rapids, over jagged shoals of coagulated grease and grape jelly. Gradually, the lean, predatory Elvis of the Sun years morphed into the guy who couldn't reach his toes without calling Federal Express.

That Langston reached the age of 78 suggests that she instinctively grasped the first rule of successful dope dealers -- don't get high on your own supply. While Elvis spent his days researching recipes for some hypothetical "Pills 'n' Lard Cookbook," Langston dutifully went about her work. "He said that the only thing in life he got any enjoyment out of was eating," Langston told the BBC.

She can't really be blamed for doing her job. But don't blame the bananas, either. They were probably the only living things in that pantry trying to help out.