I was looking for nipple relief in all the wrong places. 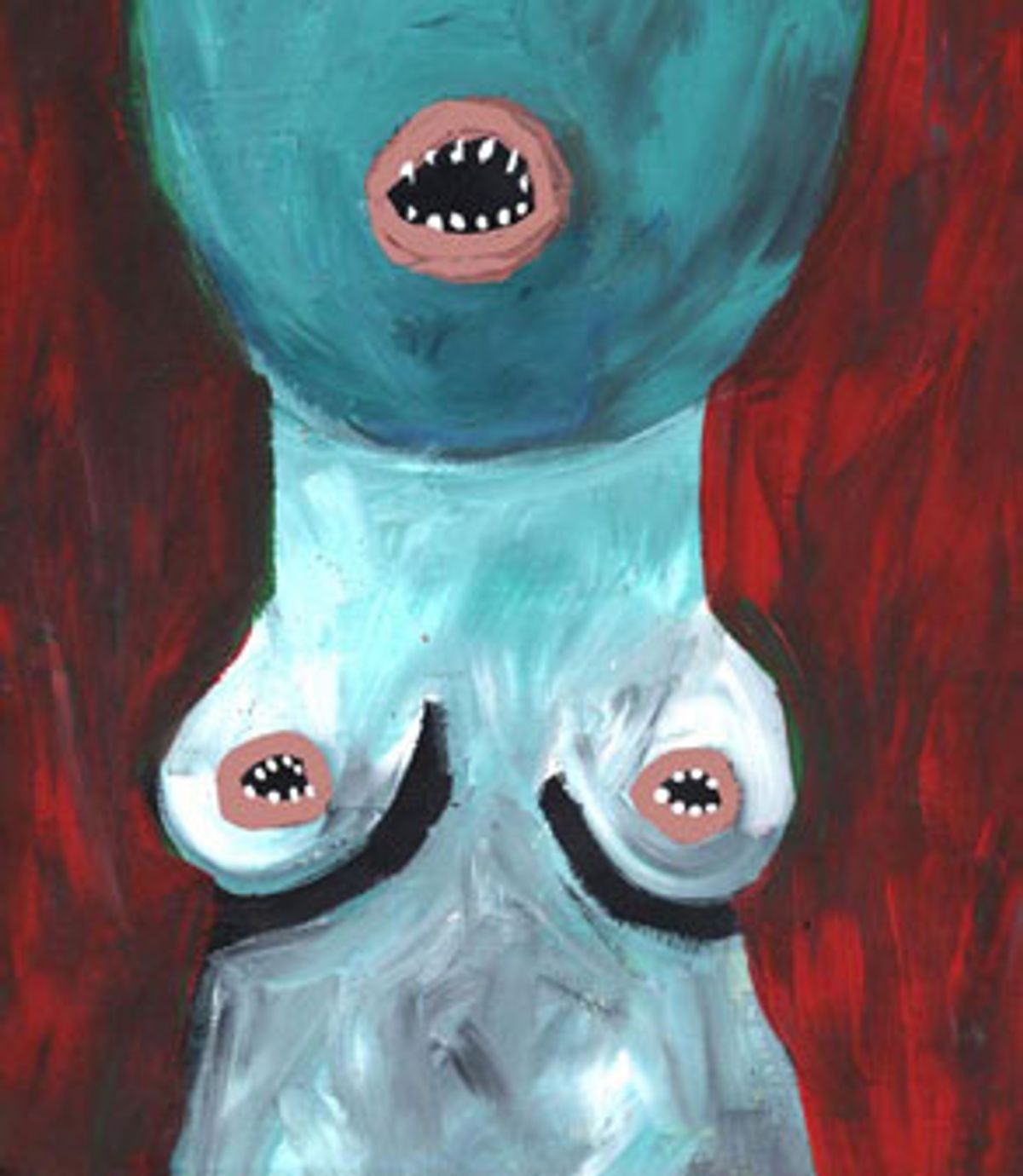 It starts in pregnancy. Experienced mothers tell you so many weird stories about their breasts when you're pregnant that a first-time mother wonders if it's not all part of a secret hazing ritual. I imagined covens of knowing crones gathered in my wake at the supermarket, snickering and high-fiving over the latest scary breast factoid they'd made me believe. And believe me, they made me believe.

In India for my first trimester, I was rubbed with exotic ayurvedic oils and told that ghee (clarified butter) worked wonders on itchy belly skin as well as "the other parts that hurt after you have a baby." Since Indians are frequently so poor they can't afford either cosmetics or analgesics, I filed this under "quaint" and moved on, determined to pack as much travel as possible into the few childless months I had left.

In Italy during my second trimester, an older lady friend told me to get a natural-bristle nailbrush ($4) and to firmly scrub my nipples and areolae each morning. Since I'd heard that the initial weeks of nursing typically bring cracked, chapped nipples, I gamely soaped one up one morning but then balked when I noticed how uninviting it felt just to scrub the palm of my hand.

Once I got home, I abandoned the nailbrush and turned to my "guilt jar" collection for deliverance. Every woman I know has a collection of guilt jars -- aging pots of cosmetic preparations obtained on impulsive shopping excursions encouraged by ladies-magazine screeds like "Home Spa Cosmetics Good Enough to Eat." These guilt jars usually seem like a good idea during a pick-me-up shopping trip, but at home they languish in disuse for years. (I have cosmetics that predate my graduation from college.)

In my collection of moldy potions, I discovered a pot of key lime foot scrub ($7). (It was making a green ring on the porcelain of the shower.) Sandy grains suspended in the lime-green gel made it abrasive, but not as painful as the brush. I used it diligently for half a week, discovering in the process that it did a nice job of softening the skin not only on my chest but on my elbows, knees and heels. I was delighted: I'd used up a whole guilt jar and certain parts of my body were darned clean. But I was further from nipple calluses than I had been before I started. I gave up on the abrasion project in the 11th hour and thought, "Tough titties."

If only they had been. A newborn baby creates suction equivalent to a hand vacuum fitted with the crevice tool. Within a day of my son's birth, my nipples were as pink and raw as bologna sausage. They went well with the ankles swollen like French rolls, but I wanted relief, not deli.

The nurses at the hospital said the pain and redness were normal -- that the first 20 seconds of a feeding made every mother's face contort into a grimace worthy of a tragedy mask. They said I'd get used to it. So as my newborn son and I "established our nursing relationship," in La Leche League parlance, I silently screamed and grasped the hospital bed rails, my eyes watering -- and I was still on morphine.

For the next 14 days, I did pretty well. I learned to get through the first part of each feeding by gritting my teeth and stomping my feet; but when the painkillers I was prescribed for the Caesarean incision ran out, I was in trouble. I hit the drugstore, looking for treatment in a tube, but wound up with more guilt jars.

La Leche League recommends (and sells) purified lanolin, called Lansinoh ($7). This waxy goo has the consistency of caramel candy, but since it's made from wool oil, it smells like the coarse tweedy sweaters popular in the late '70s. Warmed between your fingers, it's thicker than the coating on a taffy apple, and it hurts as it goes on already-raw nips. The La Leche book and the label copy assure that Lansinoh "soothes, heals and protects," but it left me feeling chafed, tormented and exposed.

True, the Lansinoh was effective in one way: It made my breast pads stick. But taking the stuck pads off my enflamed skin was an hourly pre-feeding torture that left my eyes as teary as the baby's. The amazing thing was, not even the wee lad -- whom we'd nicknamed Hoover -- could get the stubborn remnants off. When he finished a feeding, he'd flop back, dazed, exposing breasts still adorned with little white flags of paper fluff.

Once I abandoned the Lansinoh to my guilt-jar collection, I was sold a cream fortified by urea ($8) -- which meant I applied to my breasts virtually every excretion made by a sheep. It stung, so I sent it to gather dust, too.

At the department store, I found cosmetic preparations that included Mustela's "dual action maternity breast and stretch mark cream" ($41.50) and a "Buste" oil by Clarins ($27). The first was greasy going on and sticky under my clothes; the second took forever to dry, but both had to be wiped off before each feeding. With a newborn who nursed every 45 minutes, I spent as much time wiping and reapplying boob gunk as I did changing the baby's diapers. Fuhgeddaboutit, I decided. I'd rather grimace and stomp my feet.

The good news about my failure at the health food store was that it forced me to call in a specialist ($75, less partial reimbursement by insurance). In the pantheon of milk mavens, La Leche League leaders are the lay clergy and lactation educators are the Sunday school leaders who teach classes but cannot hear confession. The only pros able to diagnose a problem are the lactation consultants, LLL's High Priestesses of Creamy Godhead.

The lactation consultant took one look at the stoplights on my chest and prescribed a new method for getting my wee Electrolux to latch on. (I had to tease him with the nipple until he opened his mouth wide enough to chomp down on the entire areola -- thus improving his milk intake and my comfort, if not my sense of dignity. It was my first in a series of motherhood lessons on how to ignore the baby's cries and/or my scruples to do what was best for him.)

Once my son and I had mastered the mammo-suction gospel, breast-feeding him was the joy it had been cracked up to be.

Which left me with only the cracks in my nipples to deal with. After spending $231.50, it was demoralizing to learn that what ultimately healed my chapped titties could not have been more free or more abundant: breast milk. As it happens, the most effective balm for a sore teat is a thick coating of breast milk that has been allowed to dry and form a crusty glaze. Why, I don't know, but the lactation guru swears by it, since "breast milk has anti-inflammatory and antibacterial properties the likes of which science will never reproduce," she says. Amen.

There was just one last problem: Forming the "crust" required me to sit on the sofa in the sun for 20 minutes, topless. This isn't really possible in my household, where my husband works alongside two (male) assistants, but I did get my shirts wet enough to coat most of my trunk in a thin, sticky film. Not quite the healing crust my Teton trainer recommended, but hey, pained as I was, I was not ready to relinquish my dignity.

I finally figured out that to allow my nipples to heal I'd just have to wait -- and learn to shower without facing the head. For any first-time pregnant mothers reading this: Coat your boobies with a crust of your own milk -- and I promise not to laugh till you get past the produce section. Semper fi.