Devil in a red dress and dentures 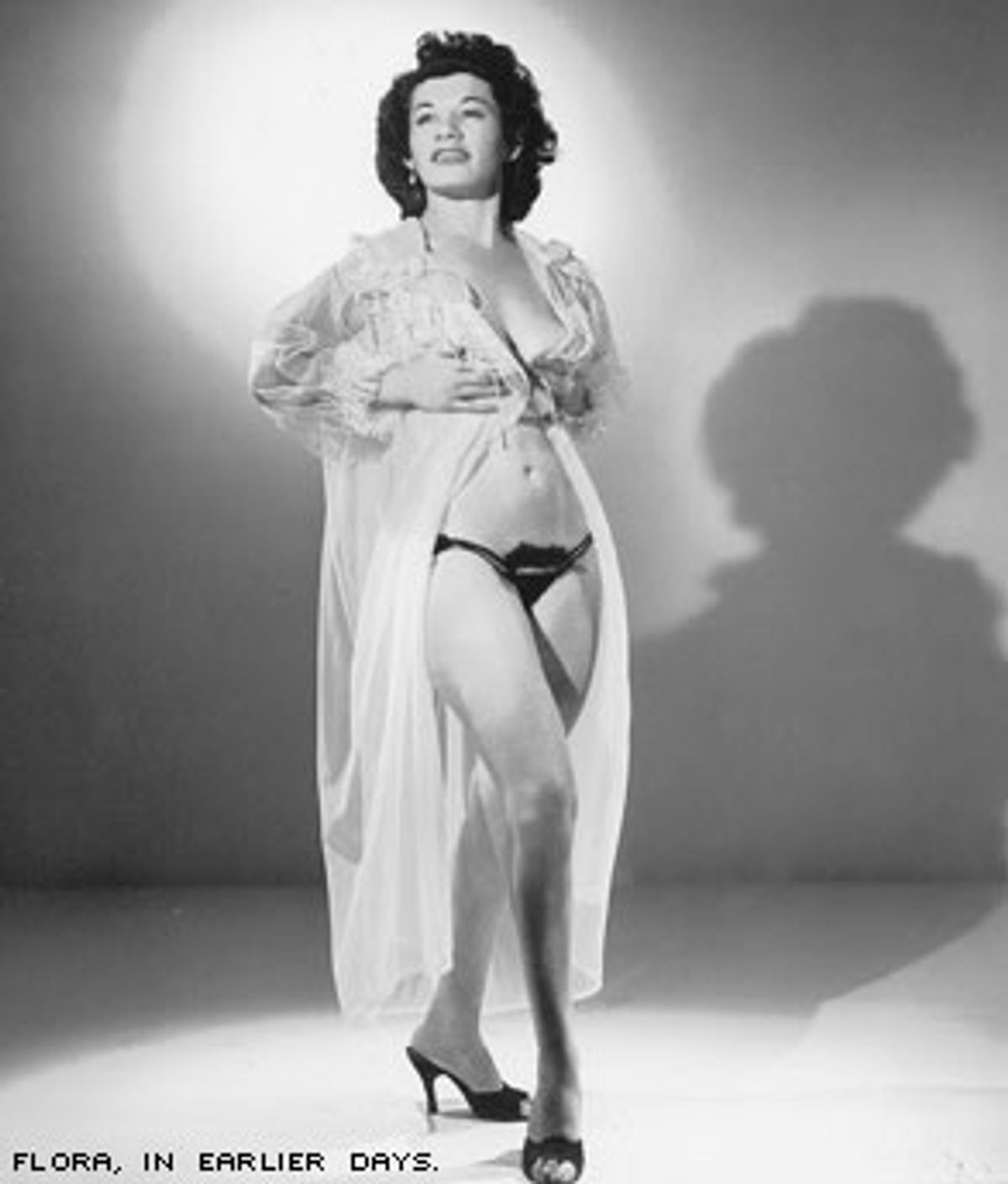 Meet Flora, a legend in an industry that trades on legends. I first heard about her when covering the Adult Video News Awards -- porn's sleazy answer to the Oscars -- for a British TV documentary. A male performer called Dick Nasty told me all about a scene he had just finished with her in a hotel suite.

"I've always liked older women." He leaned forward, and said confidentially, "Do you know, she gave the best oral sex I have ever had in my life."

"Of course she had to take her teeth out first."

At first, I thought the whole thing was just another freak show. After all, this is a business that employs an endless variety of ugly people, overweight people, dwarfs, amputees and nonpregnant lactating women to satisfy the warped desires of an apparently unlimited market. I'd already met a few of them: I'd met a midget called Bridget, I'd met a 350-pound lady called Eartha Quake, I'd met a schoolteacher from Arizona with an 18-inch penis. Was Flora just another bizarre curiosity on the wild edges of a wild industry?

"Are you kidding? There's a market for everything," he said.

"Why not?" he replied. "What's wrong with it? Just because she's old doesn't mean she can't have a good time like the rest of us. Does it?"

Cut to two weeks later and here we are, sitting in the Venetian lobby over coffee, and Flora is smiling the sweetest of smiles. Apart from the ginger hair and purple lipstick, she looks disconcertingly like my grandmother. Unlike my grandmother, she's also extremely flirtatious. Every few moments she bursts into peals of laughter, which draws the attention of everybody around us. Her vitality is infectious. I like her immediately -- as a person.

I get the ball rolling right away.

"Do you enjoy your job?" I ask, in a louder voice.

"Oh yes," she answers. "I adore sex. And the men ... they're so young. Such nice bodies. At my age, you don't often get the chance to make love with men like that. Do you know, the last man I performed with was only 26. I was nearly 60 when he was born."

She giggles like a teenager on a first date.

"Of course, nowadays it's all boom, boom, boom! These young men, they don't understand how to caress a woman." She sighs, suddenly wistful. "Ah, when I think of the lovers I had. They knew how to give pleasure. Today, they're all  amateurs."

What makes Flora really unusual -- in fact, unique -- is that this is a whole new career move. At an age when most people are content to putter around the garden, she's just getting started. She only got into the business six months ago, when she desperately needed money for a down payment on a car. A friend of hers, a slim 73-year-old part-time model named Jeanette, introduced her to a producer in the business.

"He said, 'How would you like to earn $700?' I said, 'Who do I have to kill?'" She bursts out laughing. "Two days later, I did my first scene. It was for a series called 'Century Sex.' It was really very easy. A very nice young man. Though I had to ask him to speak up." She studies me over the rim of her cup. "In fact, he looked rather like you."

I notice a rather sober couple at the next table staring at us, and swiftly change the subject.

"That's a nice dress you're wearing."

"Do you like it? I made it myself. I wore it for my first movie. Red is my favorite color." She winks. "It's a little  naughty. Don't you think?"

"I always like to dress sexy, you know. Garter belts, stockings, high heels, nice panties. I used to dress sexy for all my husbands."

"How many husbands have you had?" I ask.

We step outside onto a fake Bridge of Sighs where I take a few (fully clothed) photos of Flora. She smiles and poses for the camera like she was born to it. She obviously loves the attention.

"I used to be a dancer," she says. "I had a beautiful body then. Not like now. Look." She fishes an old black-and-white picture out of her bag. A young, shapely, glamorous Flora, wearing the flimsiest of silk gowns, smiles back at me. "All the Army boys came to see me," says Flora. "I filled the nightclubs. You should have seen how they cheered -- especially when I took my clothes off." She shakes her head sadly. "Such lovely boys. Most of them died in the war."

For a moment, neither of us speaks. I pluck up the courage to ask the question I want to ask -- and don't want to ask.

"Don't you think, Flora, you're a little, well, you know, a bit sort of, well  old to be doing this sort of thing?"

She turns suddenly to me.

"Do you ever think about the people who buy your movies?"

"If people like to buy my movies, that's good for me. If they want to watch, let them watch. Do I care? If anything, I'm flattered. It's nice to have attention when you get to my age." She smiles. "You're still young. You wait. You'll see."

Afterward, Flora drives me to her house in the suburbs. She drives like a maniac, despite the fact that she can barely see over the wheel. This woman may be as old as my grandmother, but she sure likes to live in the fast lane.

"I adore Vegas," she says. "Everything you want, it's here. Gambling, nightclubs, it's all here. I've lived all over the States, but nothing beats this town."

"You go to nightclubs?"

"Sure I do," she replies. "Everybody in Vegas knows Flora."

We tear across several lanes of traffic, tires screeching, horn blaring. Other drivers hurl insults as we pass. Flora blissfully ignores them all while I sit frozen in terror.

We pull up, at last, in front of a tidy little bungalow on a side street. Flora says, "I hope my niece isn't home."

"She lives with me. She's an ultrareligious Catholic ex-missionary." Flora unlocks the door. "I don't think she entirely approves of my new career."

We enter a room stacked with Bibles and ecclesiastical pamphlets. "My niece again," says Flora, disdainfully. "She's always reading the Bible. I tell her she'll go blind. Have a seat."

"Oh," says Flora. She looks disappointed. "They were all mine. 'Cemetery Sisters' was my favorite. Movies are my passion. Right now I've just finished a script based on my life. It's called 'Flora.' After my name, you see." She hands me a manuscript. I leaf through the opening pages. The first scene is set during the war. A bunch of G.I.s remember Flora as the best fuck in Panama. And that, I keep having to remember, was half a century ago.

"One day, I hope, somebody will make it," she says. "Maybe after I'm dead. It's a wonderful story. My life, you know, has never been boring. I have been very lucky. At the very least, I can say I lived -- I mean, really lived."

But she doesn't answer.

Then I ask, "Do you think you'll go on making adult films?"

She grins at me.

Stephen Walker is a writer and film director who lives in London. His latest book is "King of Cannes."