We want our SUVs

Al Gore and the Democrats' attacks aside, rising gas prices could be the only thing that forces the U.S. to stop hogging the world's energy. 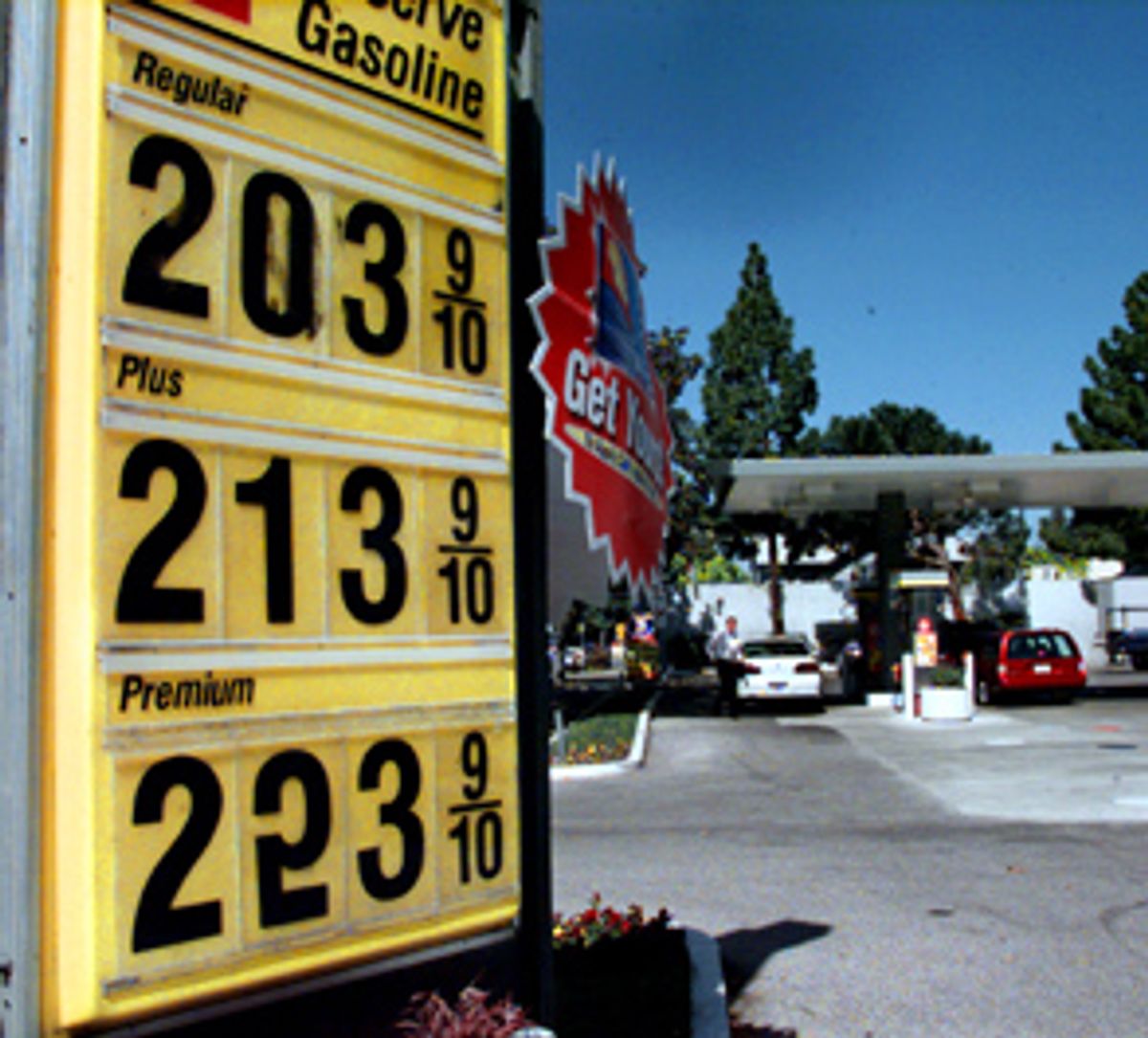 Gas prices are displayed at a gas station in Palo Alto, Calif., Wednesday, March 29, 2000. California oil companies are adding to motorists' misery at the pump by making excessive profits on gasoline, Attorney General Bill Lockyer says. He suggested Tuesday that lawmakers approve an excess profits tax combined with a corresponding cut in the gasoline sales tax to ease California prices, which are running about 19 cents more per gallon than those in the rest of the country. (AP Photo/Paul Sakuma) (Associated Press)
--

Oil prices are climbing again, at the gas pump and as an issue in public opinion polls. Congressional Democrats are warning that rising gas prices could cost the party its chances to recapture the House and Senate, and now Vice President Al Gore has joined the debate, attacking the oil industry's huge profits and calling for an investigation into antitrust violations and price gouging.

On Monday, Gore told reporters he'd only just learned of the big profit hike most major oil companies enjoyed in the first quarter of this year. "Now you put two and two together and look at the huge price increases that they say they can't explain and look at the 500 percent increase in profits and look at the way they've been getting bigger," Gore told CNN.

"I think that all adds up to a need for investigation of collusion, antitrust violations and price gouging."

Price gouging is certainly deplorable, but as a self-described environmentalist, Gore might see a silver lining in higher gas prices: They could help achieve what Congress has been loath to promote with legislation -- reduced gas consumption by consumers, and hastened development of alternative-fuel vehicles that could cut emissions of greenhouse gases and other pollutants.

In fact, what's most striking in the political debate over rising oil prices, which began last spring, is the consensus that it represents a national crisis. After all, the inflation-adjusted price of oil in the United States this year hasn't come close to reaching a historic high: We hit that in 1981, when the price in current dollars was more than $2.50. Even now, most of us pay less than $2 a gallon for gas, while Parisians pay $5, and Londoners pay up to $8. Most of the world's drivers fold themselves into light, tiny cars that get high mileage, and ration out their car trips frugally, for special occasions. Not us.

When oil and gas prices first began to climb early this year, Congress quickly piled on. Republicans wanted to repeal 4.3 cents of the 18.4-cent federal gasoline tax -- which was enacted in 1993 thanks to Gore's tie-breaking vote. The 4.3-cent increase, it should be remembered, was the legislative vestige of a failed administration effort to introduce an economy-wide BTU tax. Then Republicans remembered that the 4.3-cent tax funds highways, a popular pork-barrel outlet, and they had to shelve that plan.

Next, House Republicans tried to pass legislation forcing the president to cut foreign aid and military sales to countries that "fix" oil prices. But again they were neutralized by fellow Republicans, including colleagues from oil states, who kind of liked oil prices the way they were.

The convenient approach was the one finally settled on: find a foreign scapegoat. Republicans and Democrats could agree on one thing: the Organization of Petroleum Exporting Countries (OPEC) needed to lower its prices. (We may think of ourselves as democratic, but when the subject is oil, the rest of the world gets very little slack.) In the end, OPEC begrudgingly complied, but U.S. gas prices have stayed high, and in some places continued to climb.

Now it's Democrats who are agitated about the high cost of gasoline, especially in the Midwest. According to the Washington Post, Democratic congressional leaders have warned Clinton and Gore that anger over rising prices could cost the party its efforts to take back the House and Senate. Among the responses considered: lifting clean-air restrictions in Midwestern states, and tapping into the nation's strategic petroleum reserve.

And while Republicans have tried to use the issue to bash the Clinton administration, even some cabinet officials have acknowledged a problem. "We were caught napping," Energy Secretary Bill Richardson has admitted. "We got complacent."

Truth be told, the U.S. iscomplacent about oil, but not in the way Richardson acknowledged. When the price we've become accustomed to is threatened, we step in rather routinely. (Remember the Gulf War, anybody?) Instead, what's complacent is the unthinking avidity with which we consume the stuff. In Europe, where global warming is taken far more seriously than in the United States, drivers might be forgiven for wondering whether they sacrifice so that their American counterparts can drive Excursions and Broncos and Suburbans -- the SUVs that make up an ever-growing portion of the new cars sold each year.

In 1999, the sale of SUVs, pickup trucks and minivans -- all conveniently lumped together as "light trucks" by the auto industry in order to avoid the higher fuel-economy standards that apply to passenger cars -- amounted to 44.3 percent of all vehicles sold, up from 9.8 percent two decades earlier.

In the same two decades, average fuel economy of new cars sold in the U.S. stagnated, and has actually dropped from a 26.2-mile per gallon peak in 1987 to 24.4 mpg now. Thanks to SUVs, the nation's new car fuel-economy average is the lowest since 1980, and we spew an extra 240 million tons of global warming gases into the air each year.

This has happened despite an array of technological advances -- fuel injection, multivalve cylinders and direct overhead cams -- that could have been applied to fuel efficiency but were instead used to propel heavier cars at faster speeds and with greater acceleration. SUV drivers have so far acted as if oblivious to the price of gasoline, even though they pay an extra $27.2 billion a year at the pump because SUVs use fuel less efficiently than cars.

Even now, there's no solid evidence that oil-price increases have changed purchasing patterns (though Ford Motor Company's recent announcement that sales of its Excursion have dropped is a welcome straw in the wind). And company president William Ford's mea sorta culpa on SUVs last month -- he warned that automakers were in line to be "the tobacco company of the 21st century" if they didn't deal with the environmental and safety problems caused by the gas-guzzling behemoths -- did not promise that his company would change its behavior. Still, it was a welcome outbreak of candor in a public dialogue about cars, oil and energy that is usually unencumbered by a high regard for truth.

As it stands, the United States consumes more than a quarter of the world's production of oil, even though it makes up only about 5 percent of the world's population. About a sixth of the world's oil production is used just to power the American transportation sector. Our ever-increasing demand for oil has stretched U.S. refinery capacity to its limits, with the not-surprising result that prices have gone up. Ah, the irony: Just when the free market showed signs of functioning, American politicians got upset.

True enough, gasoline prices typically "rocket and feather": They go up like a rocket, but drop haltingly, like a feather. It's for that reason, among others, that a 4.3-cent gasoline tax repeal looked ridiculous. Take away 4.3 cents in federal taxes from the price of gasoline, and the price that consumers pay almost certainly will drop a lot less than 4.3 cents: The oil industry pockets the difference. Oil companies have certainly enjoyed a windfall: A study by Public Citizen released this month found profits on average jumped 300 percent in the first quarter of 2000 -- not quite the 500 percent claimed by Gore, but a noteworthy number nonetheless.

But if higher prices accomplish what politicians refuse to consider -- forcing Americans to limit their consumption and conserve gasoline -- the trade-off is worthwhile. The unjustifiably low price of energy inhibits fuel cell, electric, solar and wind alternatives; and it doesn't accurately reflect the $95 billion a year we spend on imported oil, or the $50 billion a year we spend on maintaining a military presence in the Middle East.

The biggest cost, however, is environmental. Global warming is a fact: The only argument left is to what degree humans have caused it, and right now most evidence points directly at us. We consume oil price news in the same broadcasts that tell us that polar ice is thawing, that flowers bloom earlier each year and that temperature changes are disrupting animals' migration and hibernation patterns.

We focus on oil prices perhaps because we think possibly something can be done about them, and do not dwell on ominous and unprecedented events, like Hurricane Mitch, the North Carolina floods or the rise in summer heat, year after year, all across the country. We're the "what-me-worry?" country, whose lack of leadership in environmental issues makes foreigners wonder why they make the effort to curb greenhouse gas emissions if the most profligate energy user in the world won't. Here, it's eat, drink and be merry, and the tune is infectious. Now Democrats are dancing to it, belying their claim to be the true environmental party.

Jacques Leslie is the author of "The Mark: A War Correspondent's Memoir of Vietnam and Cambodia." He has written for the Atlantic, the New York Times Magazine and Wired, where he's a contributing writer.