In "Inner Hygiene," professor James C. Whorton reminds us that some of our great thinkers, from Martin Luther to Ben Franklin and beyond, have been afflicted with clogged bowels. 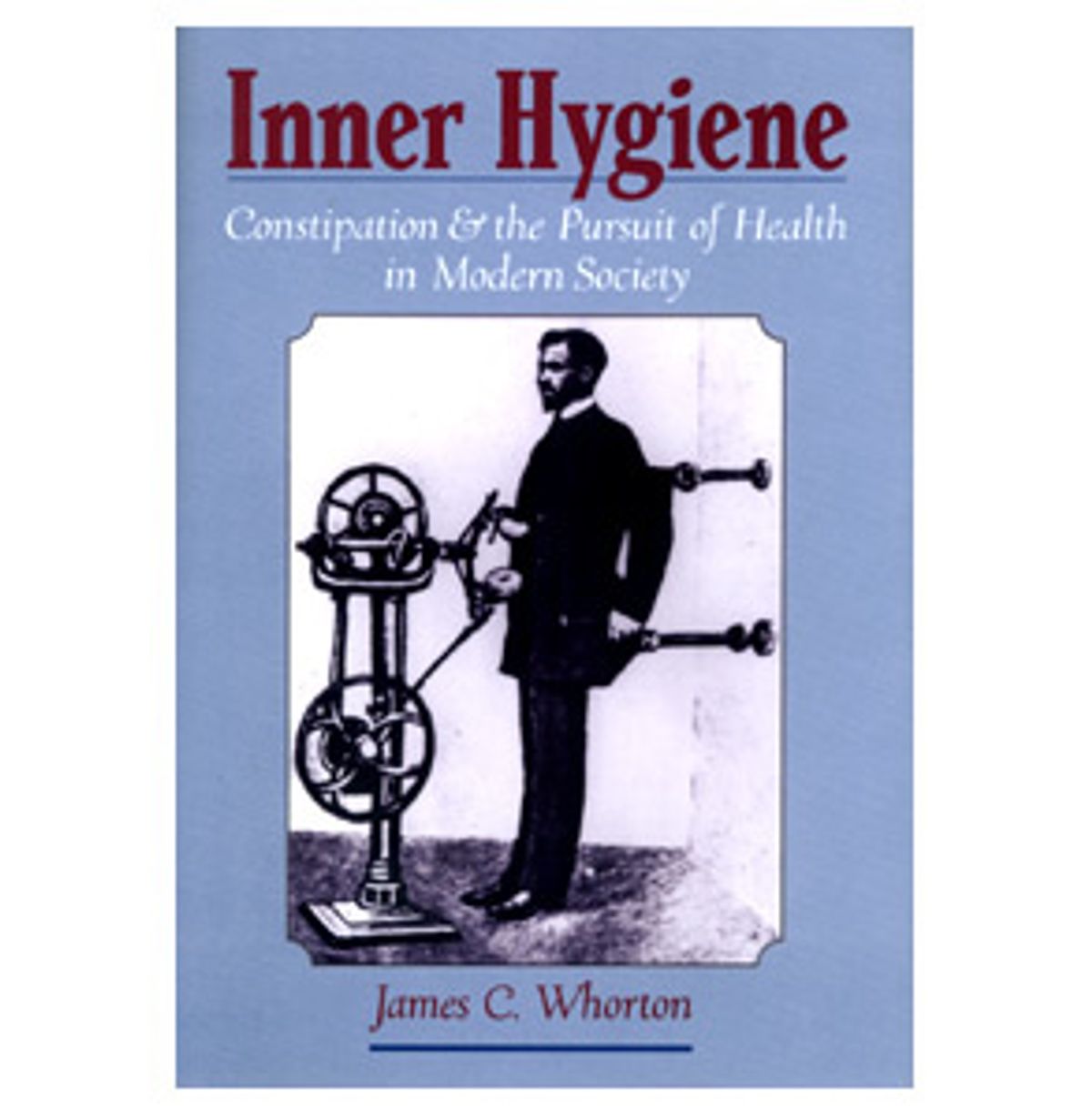 At the height of last fall's scandal surrounding the Brooklyn Museum's "Sensation" show -- a scandal triggered by a painting of the Madonna festooned with dried elephant dung -- New York Mayor Rudy Giuliani delivered an eloquent plea to the public: "I would ask people to step back and think about civilization. Civilization has been about trying to find the right place to put excrement, and it is not on the walls of museums."

People have long assumed that the fate of civilization hangs on proper potty training. In his new book, James C. Whorton suggests civilization has also flourished because of toilet troubles -- specifically, clogged bowels.

"Inner Hygiene" explores the unhappy modern preoccupation with irregularity and the remedies and devices that have been developed for this affliction. One of the many virtues of the book is that it shows, to some extent inadvertently, that civilization may be more compatible with failed potty lessons than Giuliani would have us believe.

Sure, we all grow up learning that "a movement a day keeps the doctor away." But does that mean that freedom from anxiety about pooping is a prerequisite of civilized society? Far from it. As Whorton reminds us, some of the most creative thinkers of the modern era were afflicted by bowel trouble, perhaps even inspired by it. Martin Luther's spiritual meltdown was famously precipitated by intestinal crisis. Later bowel-beclogged notables included John Locke and Ben Franklin, who both rhapsodized on the subject of regularity.

For centuries, the desperate and often humiliating quest for regularity has pushed human ingenuity to remarkable heights of invention, contrivance and rhetoric. In treating this quest as a serious subject, Whorton, a professor in the department of medical history and ethics at the University of Washington in Seattle, follows other recent scholars who have discovered fascinating histories behind modern attitudes toward bodily functions. He performs a valuable service in reminding us that civilization as we know it is unthinkable without bowel trouble and the entrepreneurial spirit it has called forth. Moreover, he does so with elegance and wit.

Source of so much misery, the blocked bowel has also fueled some of the most compelling modern visions of happiness. Visions of an existence free of straining, of an almost virginally pure and obedient intestinal tract, have animated the writings of innumerable scatologists and copromaniacs. Bowel afflictions have been transmuted into pure gold, in works like Rabelais' "Gargantua and Pantagruel."

But Whorton's main subjects are the medical quacks, dreamers and men of dubious science who have unleashed on the modern world myriad patent medicines and contrivances designed to deliver their desperate patients from the torments of intestinal intransigence. The real story of this book lies in the endless stream of purgatives, enemas, irrigation devices, flavored laxatives, rectal dilators, chewing techniques, graham crackers and Kellogg's All-Bran, which people have lavished on themselves in the quest for intestinal bliss.

From the Reformation on, Whorton tells us, Western society has been haunted by the specter of constipation, and worked energetically to rid itself of the ailment. Medical specialists and philosophers theorized endlessly about the causes, and inevitably came to focus on the pathogenic role of civilization itself: the rich diets, the sedentary lifestyles, the upright toilet seating and, most damaging, the curse of being too busy to answer nature's call.

Whorton is full of eloquent sympathy for the tortured souls for whom a successful b.m. became the main event in a life of squeezing and suffering. There is both tragedy and comedy in the stories he recounts.

One 17th century anonymous poet was so alarmed by the violent purgative-induced expulsion he experienced that he wondered: "Will all my body runne out here?" At least he survived to tell the tale. We can only stand in awe of the intestinally impaired Frenchman who died in 1809 and was found to have 60 pounds of "pudding-like material" inside.

Such natural wonders had their unnatural counterparts: Witness the case of a French apothecary called to examine a severely constipated officer in the local regiment. Frustrated in his efforts to administer an enema, the unsuspecting healer peered into his patient's rectum, and there discovered an eye peering back at him. The explanation for this "anus mirabilis"? The patient had accidentally swallowed his artificial eye; he, too, died soon after.

Against such tribulations, doctors laid down the need for regularity as an absolute law of intestinal care. Regularity was a highly serious business, as well as a deeply moral one -- one of the building blocks of a civilized order, though some critics wondered whether the obsession with regularity itself bred constipation. Health manuals raged against dietary sins: rich foods, heavy gravies and cream-clotted pastries. Victorian moralizing was succeeded by 20th century science, though as Whorton's book makes clear, the new war on constipation was waged with greater fervor than ever.

One early 20th century crusader was London surgeon William Arbuthnot Lane. Lifelong study of intestinal clogging convinced Lane that the problem lay in the design of the colon itself. His drastic solution: to re-engineer the body's defective "drainage system." Thus ensued one of the more unpleasant episodes in this history, with Lane and countless other doctors carrying out thousands of "short-circuit operations" on their mostly female patients. These procedures were designed to accelerate transit time in the bowel by surgically removing parts of the colon and its nasty little kinks.

Lane's methods of disembowelment were met with horror by many doctors. ("No organ of the body is so misunderstood, so slandered, and maltreated as the colon," lamented one.) The surgery eventually was replaced by a seemingly more benign, yet ultimately far more insidious, array of techniques for intestinal management.

The 1920s and '30s were the golden age of the laxative industry. Aggressive laxative manufacturers sold their products by: 1) making constipation seem "inescapable and terrifying" and 2) making their peppermint- and chocolate-flavored cure palatable, even fun. Victorian strictures gave way to modern permissiveness: If dietary discipline failed, Ex-Lax absolved the self of its sins against the bowel. Marketing drugs as candy, the purgation industry created a generation of Americans enslaved to the consequences of laxative overuse. The ironic result: constipation, and, even worse, the fear of constipation -- what Whorton calls "bowel neurosis."

In recent decades, the dietary-fiber hypothesis has been the reigning shibboleth, linking all manner of diseases to the low fiber content of the typical Western diet. The belief that earlier, less civilized societies experienced more generous movements because they ate more fiber resulted in the modern embrace of psyllium husk. But the release of medical studies earlier this year showing that high fiber does not help fight colon cancer has threatened to plunge intestinal science back into the darkness from which it only recently emerged.

The colon may be the darkest of the continents civilization has encountered; a final place of resistance to culture. But, implies Whorton, one need not see the relation between civilization and shit strictly in terms of enmity. In fact it is very likely that the perception that shit is, well, shit, has contributed to the fear of constipation, and therefore to constipation itself.

The notion that civilization is threatened by either pathological retention or expulsion is anachronistic. The real question is not whether civilization causes constipation, but where would we be without it? Whorton's answer: much impoverished in spirit, word and deed.

Will "freedom of the bowels," that "most precious and essential of all the freedoms," as one of Whorton's sufferers puts it, ever be more than a chimera? Whorton's book provides little hope. The best he offers is the advice of a wise physician, who urged his patients "to follow the example of the dog rather than the cat, and never look behind them."