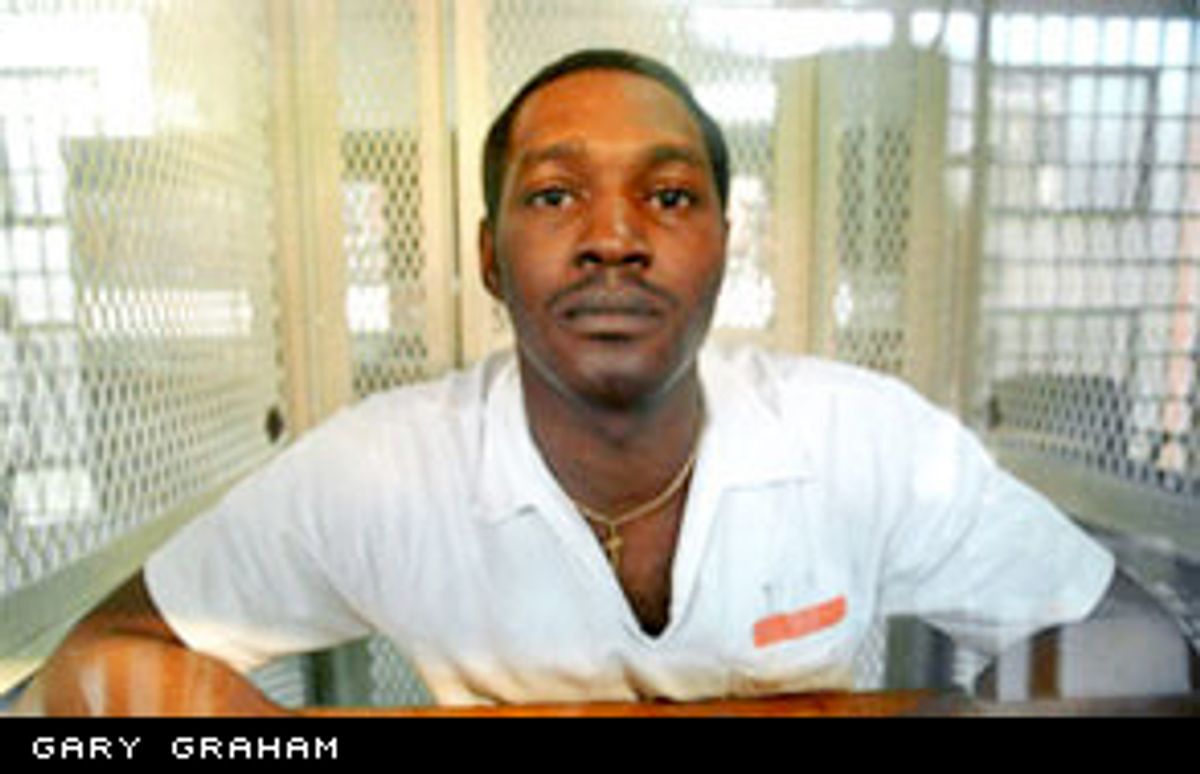 One evening in May of 1981, 53-year-old Bobby Grant Lambert, a resident of Tucson, Ariz., was visiting Houston. As he left a supermarket on Houston's North Freeway, a stranger accosted Lambert and reached into his pockets, seemingly looking for cash. A scuffle ensued, and a shot. Lambert staggered back into the supermarket and died on the spot. When police searched his body they found that whoever had shot him had walked away with change from a $100 bill.

Nearly two decades later, Lambert's murder is roiling the presidential race, and serving as an accelerant to the well-beyond-smoldering national debate over capital punishment. On Thursday, the man convicted of that killing is scheduled for execution in Texas -- even as a national, celebrity-studded campaign raises questions about Gary Graham's guilt and as Texas Senate President Rodney Ellis -- who serves as chief executive while Gov. George W. Bush is off campaigning -- has asked for a rare full meeting of the state Board of Pardons and Paroles to consider the case.

Presidential politics has a way of distorting even the most vivid of issues, becoming the filter through which every event gets viewed. To understand the stakes in the Graham case, the first thing to do is forget about George W. Bush and Al Gore. Forget, too, what you think about Texas and its death row, forget about DNA evidence and "The Thin Blue Line" and Mumia Abu-Jamal and all of those innocent death-row inmates in Illinois.

Instead, start by meditating on the facts of Lambert's murder and the trial of Graham that followed. And ask yourself a very simple and naked question: Do those facts give you confidence in Graham's likely execution Thursday?

Gary Graham, by any measure, was a frightening and violent teenager 20 years ago. By the time he was 17, he had, by his own admission, committed 10 armed robberies. In any state in the nation, he would have been incarcerated for a long time. That is one fact. Here is another: The night of Grant's random, brutal killing, Graham was wearing black pants and a white jacket. So, by all accounts, was Grant's killer.

But there are other facts as well. There was no physical evidence linking Graham to Lambert's murder; in fact, the gun found on Graham when he was arrested was ruled out as the murder weapon. Graham was convicted on the basis of identification by a single eyewitness, a woman who saw Lambert's shooting from her car, 40 feet away. That much the jury learned. But here's a fact Graham's jury never learned: Before sending that witness to pick the killer out of a lineup, Houston police had showed her one photo, and one photo only: that of 17-year-old Graham.

This isn't just a procedural technicality. Traumatic memory is among the least understood branches of psychology; under stress, the mind has its own purposes, and absolute factual accuracy is not one of them. I've experienced this myself: A few years ago I published an essay describing a violent incident in which I was injured, and told with absolute conviction of how one witness turned away from the scene without helping. Months later, I learned from a mutual acquaintance that I had the facts entirely wrong; in the terror of the moment, my mind was making order from chaos, but didn't get it right.

Here is another fact. There were six other witnesses to Lambert's murder. Not one could describe Graham -- and several even described someone else. The jury never learned about those witnesses, either, because Graham's goldbricking trial lawyer didn't bother to interview them.

And one final fact: Of the 12 jurors who in 1981 found Gary Graham guilty of Bobby Grant Lambert's murder, three say they would never have voted to convict had they known all those facts.

"I always had a bad feeling about it," Bobby Pryor, one of those jurors, said recently. "My gut feeling was he wasn't guilty. I just believe he might be innocent."

Pryor, in other words, has looked at those facts, and stripped the case down to that very simple question: Was justice done in this case - justice for either Bobby Grant Lambert or Gary Graham?

And if Pryor's hard meditation on the facts of the case provokes moral unease about the particular events unfolding over the next 24 hours, it is equally revealing of the layers of political meaning that the case has taken on.

Let's start with where the case is situated: the Texas criminal justice system. Much has been made of Gov. Bush's inability to request a reprieve because his predecessor Ann Richards already used the one-time reprieve authority of the governor's office in the Graham case back in 1993. But that's a dodge: Just two years ago, Bush asked the Texas Board of Pardon and Paroles to review the case of serial killer Henry Lee Lucas, a request he could easily make here. The interesting thing about Graham's case is how clearly it underscores the fundamentally undemocratic, unaccountable and politicized nature of this pardons board.

Here you have a case riven with doubt, with new evidence never available at trial, with corrupt police procedures and jurors who have recanted -- yet the pardons board, as in other cases, was until yesterday ready to send Graham to his death without even a formal hearing.

It took until Wednesday, with the glare of the presidential campaign on Gov. Bush and with the direct intervention of Sen. Ellis -- who was also responsible for the reprieve granted to Ricky McGinn earlier this month -- for the board to show the first hints of shifting. Several members of the board have told reporters they now believe Graham may be innocent, and board chairman Gerald Garrett says that, while the facts "lend support" to Graham's conviction, "there's still information that I want to review and be sure that I have in fact taken all that into consideration."

Then there is the presidential campaign. It is George W. Bush who has taken the pressure for this case, as he should. He is, after all, the most ardent executioner ever to run for president, who has expressed repeated confidence in his state's capital trial system, even as one atrocity after another -- sleeping lawyers, paid-off witnesses, racist jury selection -- comes to light.

Yet Graham's impending execution, on such dubious ground, cannot be laid only at the Republican doorstep. That the country now faces a crisis of confidence in the criminal justice system is the direct result of the intent of Republicans and Democrats alike on exploiting the death penalty for narrow political gain. Gore, like his boss Bill Clinton, has applauded expansion of federal and state death penalties, even as an alarming number of death-row inmates are proven innocent and the volume of bad-trial cases mounts.

Judging from his recent comments, Gore seems only to have just noticed that when it comes to capital punishment, he is caught with the hook in his mouth -- trying at once to pander to the old tough-on-crime sentiment while at the same time acknowledging plummeting public support for capital punishment, especially among core Democratic constituencies.

"I think there is a very careful continuing analysis," he lamely told the New York Times last week. "If it justifies further steps I have an open mind about it." This was classic Gore equivocation, almost on a par with his "no controlling legal authority."

That Graham faces execution Thursday is the endpoint of 30 years of bipartisan politics of vengeance. But that Bush, the Texas Pardon Board and Gore feel compelled to respond at all to the wave of protest over such cases -- as they would not have even a year ago -- is the best evidence yet that the broader public has, like Graham juror Pryor, passed a moral tipping point on criminal justice -- even if the pols are as yet dimly aware that they have been left behind.