I wanted to inherit the flawless skin; instead I got the sobbing reflex. 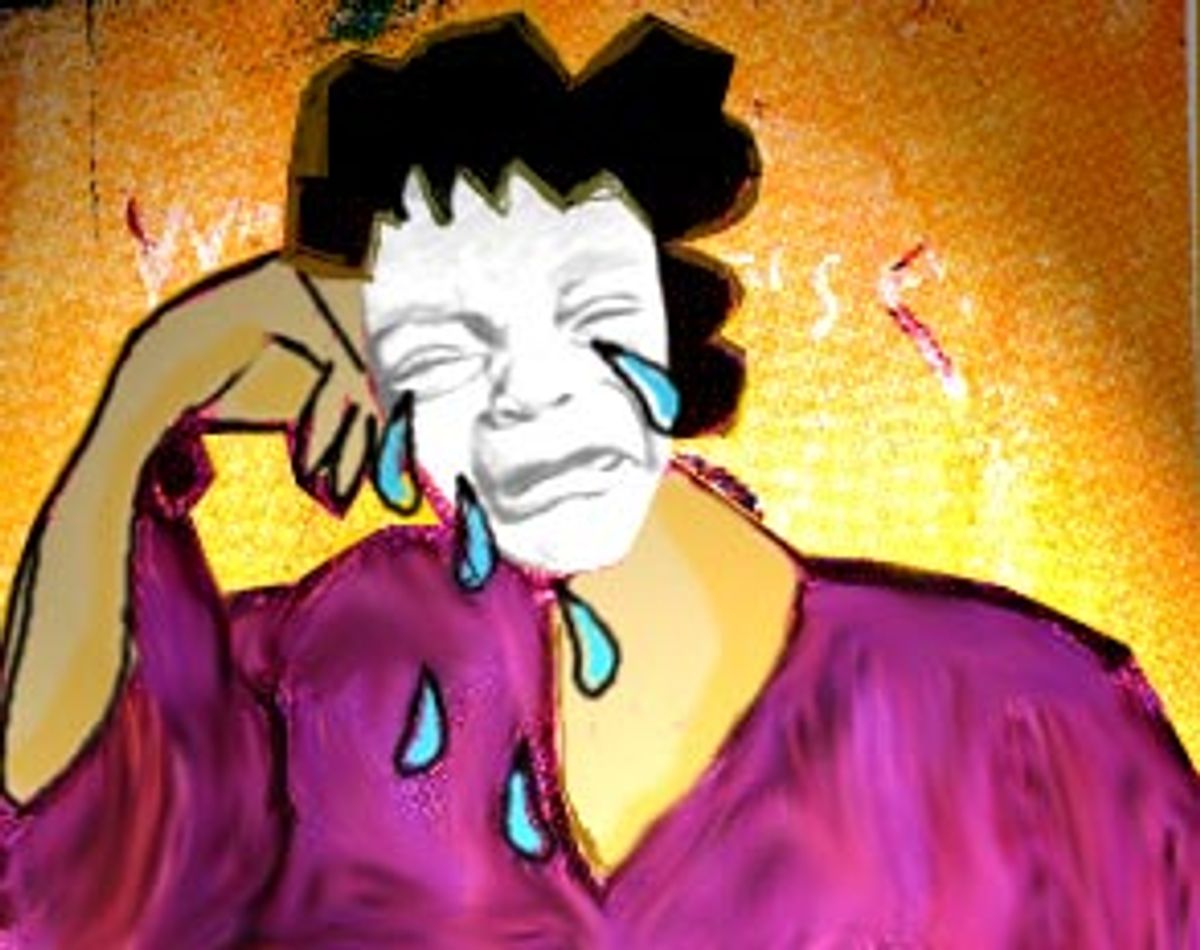 My mother and I share some traits, as mothers and daughters often do. We're secret smokers and quick studies; we are unable to tolerate grit or crumbs. We both endure ever present aches for grandmothers we never really knew. I wish I had gotten her dogged optimism, her capacity for small kindnesses to strangers. Instead I inherited something that I often wish I could take back to the store.

I am a crier, and I'm sure it has been genetically bequeathed, just like the green-gold eyes. It's the kind of thing I warn people about so they aren't frightened or repulsed when the pipes burst.

I'm not talking here about the odd crying jag on a long and lonely evening, or the errant, silky drop that slips out during "Dr. Zhivago." I am talking tears for every occasion: Something goes wrong. I am snubbed, or my boyfriend yells at me, or I cannot get the goddamned customer service people to help me out. I suddenly remember that I hate my job, or I am momentarily overwhelmed by love. I am mean to someone -- accidentally or on purpose. I get sad or frustrated or angry or any combination of the above. And it begins.

My nose starts to tingle, just inside the nostrils. My upper lip and forehead bead with sweat. The tingle then creeps north, lands behind my eyes and burns its way out. Ground zero. All at once my eyes well, fill and spill. Sometimes I can stop within a few minutes; other times, a few hours. Once, in college, after my first freshman boyfriend and I called it quits -- after three whole months! -- I believe I cried for 24 hours straight.

Afterward is no bargain either. Eyelids red, nose pink, cheeks puffy, brow sweaty, eyebrows all weird and dented: I am a litmus test of grief. Sometimes I am terrified that my face will get stuck, like my parents warned when I made faces as a kid, only mine will be frozen in midweep.

Mom, as you may expect, also is a large-type book when it comes to grief. Now that we live in separate places, it's her phone voice that tips me off. "Oh I meant to tell you, I saw the (cutest, saddest, most depressing) thing," she begins. "It was on TV. There were (seal pups, conjoined twins, mothers of septuplets, cancer patients, paralyzed marathon runners) and I was watching it and, oh, I can't even say it, I'm going to start to cry ..."

And she does. Her voice gets creaky. She's off. And as if we were twins, genetically hard-wired to each other, my nose starts to burn. I swear. Every single time my mother cries -- no matter how hokey or dire the cause -- my body reacts in kind.

In these moments I scramble for camouflage. Sometimes I growl and get tough, pretending she is silly for crying over such things. Sometimes I laugh. Often I clam up, feign impassivity. This was the drill when I was in Greece for the summer a few years back and I phoned home one night to check in.

"Have you talked to your roommate?" she inquired, gingerly.

On guard immediately, sensing a waver in her tone, I asked, "Why?"

"Who died?" I demanded. My heart pounded in my bony chest. People around me were stumbling, laughing, drunk. It was late at night.

"Not who ...," she said, the familiar creakiness seeping across oceans. That was the only clue I needed, but she went on to tell me about my cat, Max, and his sudden illness, and how my other cat was OK, but as she spoke all I could hear were her tears and I was silent. "Honey, I'm so sorry," she said.

"I'm fine," I reassured her, frozen. "Really. Don't cry." But I was not fine. I was angry. A scrawled journal entry from that time says, "Max is gone. I cannot even be alone with my grief because my mother begins to cry as she tells me and I must stop her pain by holding onto my own."

My mom and I were standing in the door of our apartment in Queens when she told me that her mother had died. I had a fractured ankle from jumping rope in the street and was holding onto the doorknob to keep my balance. I was 13.

"Grandma died this morning," she said. She was wearing a pink silky blouse I had traded to her and a black blazer.

"Oh," I said. "I'm so sorry." It seemed like the right thing to say. That's what people said in books and on TV when somebody died. I couldn't say what I wanted to say, which was: "But I barely knew her."

My mother's mother -- the only grandparent that lived to see my brother and me -- had lived in Dry Harbor Nursing Home. I remember that she liked Coffioca candies and hoarded sugar packets. She liked the Yankees. The Dry Harbor people took away her private room when she started a fire by smoking. (I am the third generation of secret smokers.)

My mother is frequently shocked by the number of years that have passed since her mother died (16) and is distraught anew each time she remembers. The last time she mentioned it, I asked her if her mother had been a crier, too.

"Not exactly," she said. "She didn't talk about her emotions very much. I wish she had. There's so much I don't know about her." I understand this, the disturbing patchiness of the unfinished portrait. "But the time I cried to her and she started to cry too -- that was the last time. I never cried to her again."

It was an incident involving a broken heart. I imagine them sitting together on a worn couch in the tenement apartment I never saw, my mother sobbing on her mother's shoulder. Reaching for her daughter, my shadow grandma begins to weep with her. It's hard to envision this gesture, since my image of my grandmother is not a soft one. She wasn't a sweet old lady. She raised my mother alone after her bold marriage to my non-Jewish grandfather. He died when my mother was 9 years old.

"That was the last time," my mother repeated, softly. I didn't tell her that she reinforces in me the same steely resolve. She claims that she has her crying jags under control, that she can hold back when I let loose, just like I believe that she doesn't know how her tears trigger my own.

Of course we are kidding ourselves. She knows as well as I do the power of the tear. After all, when I was a teenager and we had our knock-down-drag-out screaming matches, she must have known that when she began to cry she was accusing me more effectively than words could have.

When I slammed my bedroom door behind me and wept in despair it was because her tears told me I had the power to hurt her, and I had used it. And I was sorry. Yet I give this power to others every time I weep when I should not. Everyone knows you shouldn't cry at work. You shouldn't cry in front of adversaries. You shouldn't cry all the time. Tears represent weakness. Tears spell vulnerability.

I've been told that I should be grateful for this tendency, that I should embrace my crying fits as evidence of emotional candor and a warm nature. One woman I know believes that she inherited the genetic flip side of my condition: the ice gene. She is equally distraught. I can rest assured, she tells me, that no one will ever mistake me for a cold fish.

But at work, in restaurants, at the family dinner table, my tears can horrify, infuriate, even intimidate the people I am close to or just happen to sit by. I think of it as a problem and try different devices, like thinking of recipes, to staunch the inevitable flow of tears. Nothing seems to work.

I've entertained the notion of hypnosis or psychotherapy or drugs to abolish the tears once and for all, but I'm pretty sure I'm going to be like this forever. I'll remain pinned between gratitude for and frustration with the hereditary whimsy that puts my feelings on public display.

Maybe eventually I'll even embrace the crying gene, if only because it came to me by way of my grandmother. The dream of a connection, even one woven of water and salt, is pretty much all I've got.

Amy Brill is a writer and editor living in Brooklyn, N.Y. Her work has appeared in Time Out New York, Premiere and Talk, among other publications.