What's to blame for the Central Park maulings?

What nobody's asking is where those men ever got the idea that enjoying the power to sexually terrify women is OK. 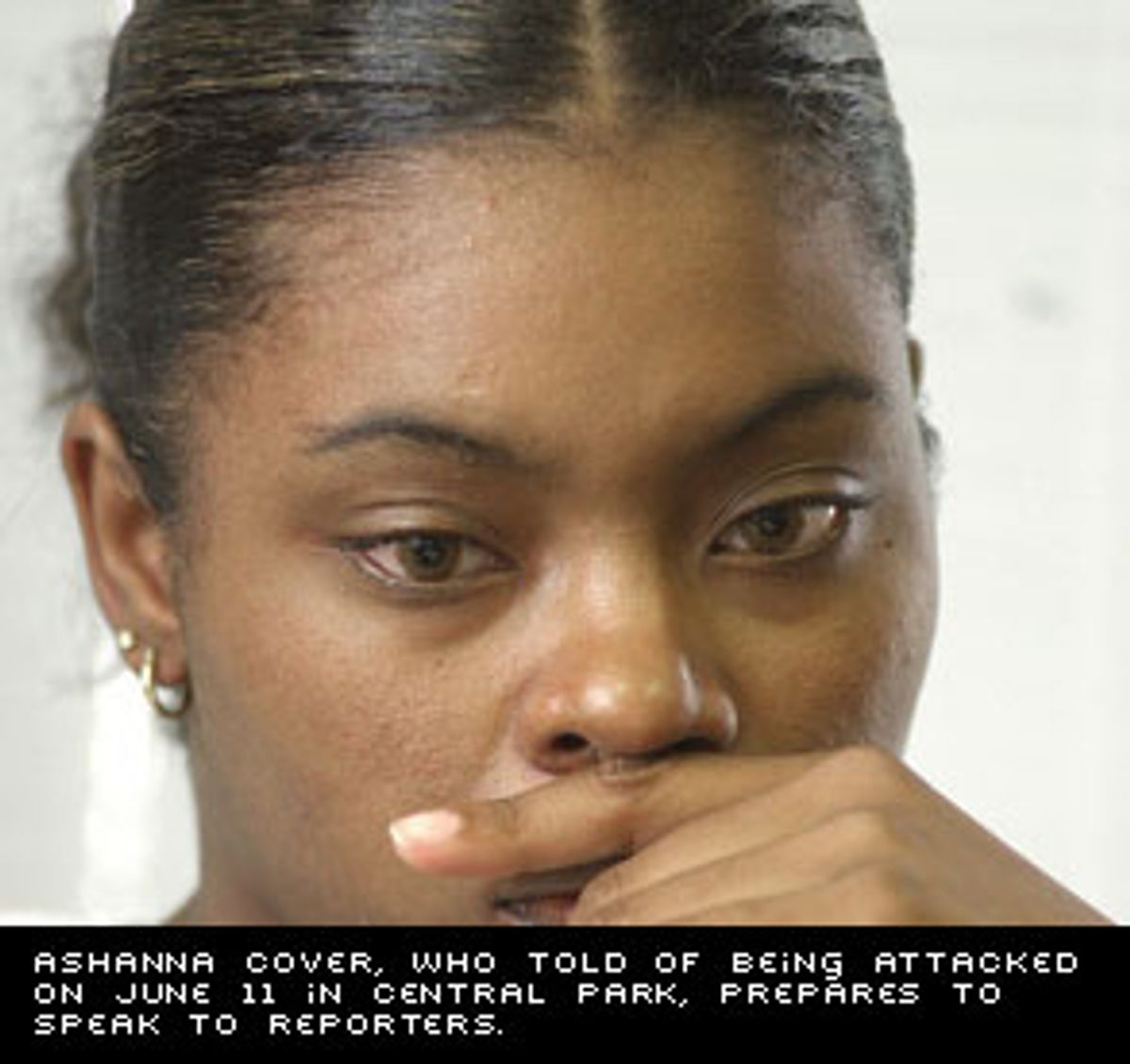 I got into an argument with my best friend when she insisted that everything I write must have a feminist agenda, because females are second-class citizens, and as a female writer I am political whether I like it or not. I thought that was pure crap. I'm not a second-class citizen, I reasoned; I kick ass and take names. I divide and dominate. On an international level, yes, of course, women are treated worse than goats, but here in the mighty U.S., I argued, I am the master of my own destiny. Which is why I was really mangled in the head when my friend was essentially proved right on June 11.

I interviewed forensics expert Brent Turvey recently, and the thing that he said that stuck in my mind was, "We get the crime that we deserve."

We all know that it is the year 2000, and a bunch of women were gang-groped earlier this month at the Puerto Rican Day parade in New York's Central Park. Crowds of wild young men surrounded women, hosed them down with water, ripped their clothes off, grabbed their asses and in some cases stuck fingers up them and pawed their tits.

A policeman on the scene retorted to one woman, "You could file a report." Fortunately, the woman was a real talker, and let the world know and know and know. And things happened, and the wheels of justice were kick-started and rolled out of inertia and now it's a circus. But what nobody seems to be asking is, where did that group of men ever get the idea that this was OK behavior? Where did they get the impulse to enjoy the power to sexually terrify women? Just as K follows J, this is not an isolated, unthinkable event that came out of nowhere. I blame several things:

1) Drunk crowds. This is what happens when uneducated mooks who are raised by television, pornography and beer get together in a big, loosely controlled, "festive" atmosphere. Most of the time things will be peaceful, but a few violent, dog-brained blights on humanity will get a bad plan in their teeth and run with it, their eyes vacuously a-glint with ill mischief, and will be so intoxicated by the thrill of their own horrific stupidity that they will start a small conga line of unforgivable behavior in others who are too drunk, brain-damaged and otherwise subhuman to know the difference between right and wrong. In other words, it was a Super Bowl party.

2) Television. MTV alone is a case for the severely bad sexual programming young people get when they grow up watching women wearing nothing but thongs, oil and hairspray grinding wetly in states of advanced estrus against Enrique Iglesias all day, combined with softcore ads for Victoria's Secret panties.

At the P.R. Day parade, many of the women, because it was a hot day, were wearing halter tops and shorts; perhaps this subconsciously suggested every single piece of tits-and-ass media these goons have jacked off to every day of their lives, and made a group of particularly malevolent assholes feel wholly entitled to molesting the women in broad daylight, violently -- on TV. After all, women seem to like that kind of thing.

WOW is something the working class of NYC has embraced wholeheartedly. On the back of virtually every delivery truck, some chinless fuckbag has written "WOW" in the dirt with his fingers. Sexy, huh? This is supposed to cue women on the road, every Wednesday, that they are to stop driving, lift up their shirts, and show the truckers their tits. Maybe some do.

The "show us your tits" battle cry is nothing new -- it has been plaguing the Indy 500 for decades, ostensibly without incident. Topless fat women on the backs of moving Harleys are classically to be found engaged in rollicking contests wherein they try to bite a raw hot dog off a string dangled at face level, and all is otherwise civilized -- but WOW, due to the pervasiveness of its lowest-common-denominator appeal, seems to have encouraged a Hell's Angels approach to gentlemanly courtship among dipshit youth -- a feeling of sexual entitlement. Gimme, or I'll just take it.

During the arrests for the Central Park rampage, it came to light that all of the young men responsible for this appalling, barbaric, poisonously infantile, retrograde behavior are totally innocent. Their mothers know for a fact they are, even though their mothers were back in Queens at the time. The other half of acting like a dangerous wild pig in this country is the total inability of the perpetrators to take any responsibility for themselves, and making other people clean up after them. It wasn't me, Mommy.

If I were the judge in this case, I'd cut the gropers' dicks off and sell them to the Chinese, to boil as an aphrodisiac in lieu of the tiger penises for which the great cats are being hunted to extinction; perhaps there can be a lucrative market for the genitalia of young sex offenders that will end up saving the tigers of the world. I can say this, because I know it will never happen.

What probably will happen is that a few of those convicted for the Central Park maulings will do some time in the pokey, and they will be raped in prison, as is the case in these situations. Is this poetic justice or is it bad following bad down the hole of bad? Well, they should have thought of that at the parade when they were ripping the pants off that French girl.