You'd expect Gates and Ballmer to gloat about their plans for a Net-based platform teeming with complex features -- but Marc Andreessen? 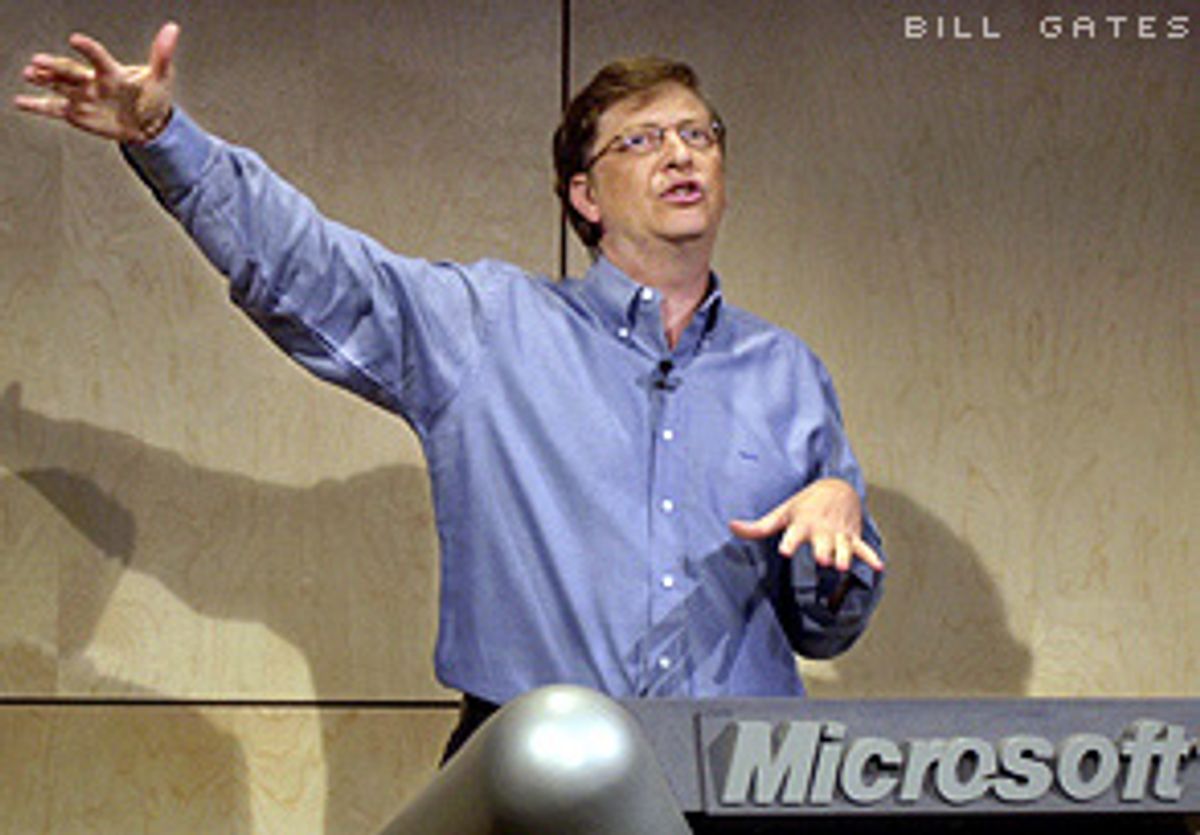 I've seen Microsoft's version of the future of the Internet and -- guess what? -- Microsoft is at the center of it. At a corporate revival meeting for press and analysts Thursday, chairman Bill Gates, CEO Steve Ballmer and a parade of clean-shaven execs offered a sneak peek at "Microsoft.Net." The seemingly all-encompassing platform that promises to extend to every device you might use won the highest accolades from Gates and company, and was repeatedly heralded as the biggest thing since Windows.

"This will redefine the user interface as much as the transition from DOS to Windows," said Gates.

There are undeniably nifty, Jetson-like aspects in Redmond's crystal ball; still, I shudder to think what it will be like to do something simple like compose a Word document in this brave new dot-net world. In typical Microsoft fashion, this grandiose new platform is chock-full of complicated features and ambitious interconnectedness -- much more than you might need. In fact it's so complicated that after four and a half hours of presentations and demos, Steve Ballmer joked that we were all probably still wondering just what "dot-net" is.

So, what exactly is it? Well, it's a programming infrastructure for the Net. But it's also a new "user experience" as well. All this dot-netifying is aimed at making your data simultaneously available to your PC and all your disparate wireless devices, cell phones and PDAs. It also promises to marry the functionality of different software applications, say Excel and Word, through the magic of XML.

No one's pretending that this is possible now. "We're embarking today on a long-term transformation of the Internet. This stuff is not going to happen today, or tomorrow or the next day," said Ballmer of the company's "technology preview demonstration." Still, he pledged: "We will run this with the same kind of openness that we've run Windows." Words that will surely strike competing software makers as sheer mockery.

I figure if Microsoft can bring in busloads of journalists and analysts to tout the wonders of software and services that it isn't even planning to release until 2002, surely it's not too early to start speculating about the drawbacks of that code-in-progress.

Some of the "coming soon" products that Microsoft envisions: a Samsung "smart phone," which will turn your phone into something more like a PDA, letting you access your data -- such as contact information and stored e-mail -- even when your phone is offline. Then, there's the "Tablet PC," a computer that looks like a flat-screened magazine for reading e-books and which lets you annotate the "pages" in your own handwriting and even lets you search through your handwritten notes.

But more whizzy than any single product is the promise that you'll be able to use the functionality of different applications from within each other -- like calling up a spreadsheet from within Word, without opening a new application.

And here's where I start to get cranky. Because Microsoft wants to "help" you by building all these possibilities right into the document you're working on. And we know about the feature-creep that happens when Microsoft starts getting overzealous about being helpful.

For example, say you write the name of a company in a Word document. Suddenly, a mysterious underline will appear under that name. When it does, a click just to the left of the word, thanks to a so-called "Smart Tag," will bring up a menu with options to access the company's Web site, stock information, analyst reports, etc.

This feature will make once static documents effectively interactive, without you ever leaving the application. But like that annoying Office Assistant paperclip guy, it will do it whether or not you want it to, likely turning writing a simple letter, where you really don't need a stock quote on the company you're mentioning, into a production full of distracting underlined words.

If Word gets this improved, I'll be resorting to SimpleText.

Despite Microsoft's odd notion of "improving" software, the weirdest moment of the day had nothing to do with the technology: Buried in the press kit was a fawning quote from Marc Andreessen, the Web's poster boy who once rallied to dethrone Microsoft with his browser. The Netscape co-founder, who is now the chairman and co-founder of Loudcloud, offered this canned quote in support of Microsoft's plans for the future: "Loudcloud is excited about .Net because it is directly in line with our vision of a world of networked services ..."

It's enough to make Judge Jackson wonder what Jim Barksdale and company were making such a fuss about.

But that pesky antitrust case didn't have any place at Redmond on Thursday. A boisterous Steve Ballmer stayed on message, making only veiled references to it in his presentation: "The last six months has been wild, absolutely wild for me professionally," he boomed. "There are a lot of reasons for that, but the most significant one is the transition that we're going through as a company." Oh, really?

"For me, the last three weeks have made me almost like a caged animal!" he belted, as if keeping the company's new direction under wraps -- while the world was fixated not on Microsoft's future, but Judge Jackson's verdict about its past -- was just too much for the voluble executive to take.

But with Jackson's call for a breakup delayed until another court can assess the case, and Microsoft facing no immediate restrictions on its behavior, you have to figure Ballmer and friends are going to use all that pent-up energy to further their dot-net plans. And if they can get your PC, PDA, cell phone, e-book and who knows what else running on their new Net platform, there's no telling if even the Supreme Court could stop them.