The third season of HBO's "Sex and the City" is going for the groin as well as the brain. 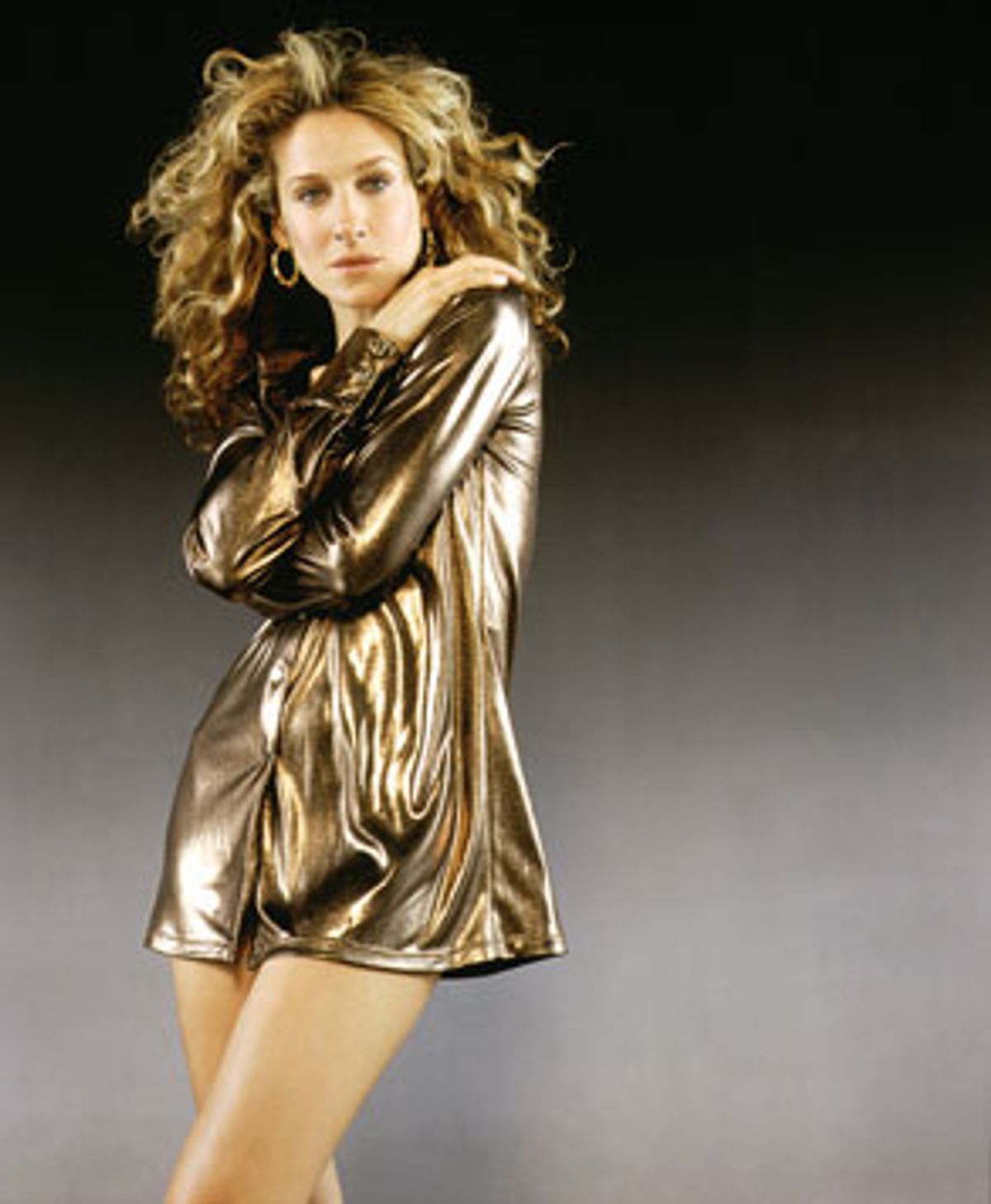 On May 25, David Letterman welcomed actress Sarah Jessica Parker onto the set of his zany late-night talk show with a warm, lingering embrace and sweet nothings whispered in her ear. A few minutes into their interview, a Ferris Bueller-like smirk crossed his face. Apparently Letterman had in his possession the promo for the new season of "Sex and the City," Parker's hit HBO series and, judging by the way he squirmed in his seat, he was also extremely taken with it. (Luckily, he has a desk to sit behind.)

"Sex and the City" first aired on HBO in 1998, a creation of "Melrose Place's" Darren Star based on Candace Bushnell's New York Observer column of the same name. The show quickly attracted a cult following of "Arli$$" haters and "Larry Sanders Show" leftovers. During its second season, however, the show became a full-fledged phenomenon among young, professional females: Women began explicating dialogue and plot lines over cocktails; they planned "Sex and the City" viewing parties; often, they so identified with the show's depiction of single-girl life they went as far as to cast one another in the show's lead roles ("I'm Miranda and you're Charlotte!"). Last year, the show was nominated for two Emmys and won two Golden Globes, one for best comedy series, further heightening its profile. And last week, TV Guide not only did a cover story on the show, but offered readers a choice of four "Sex and the City" collector's covers from which to choose, calling the show "a bona fide smash" and "pop culture touchstone."

But back to Letterman. The promo he so snickered over depicts Parker as an oiled-up, sexed-up, glamour goddess sashaying down a traffic island in Times Square wearing nothing but a gold bikini. Certainly, with her lithe, curvaceous figure and perfected pout, Parker is quite the looker. But more intriguing than her good-girl-gone-raunchy romp was Letterman's schoolboy-with-stag-film reaction, which underscored the fact that the show's producers, not content with merely capturing America's eyes and ears, have been going like gangbusters for its groins. In Manhattan, billboards advertising the series show Parker clad in a tight black dress emblazoned with the image of a very white, very large, very ... vertical Empire State Building.

The sexual saturation seems to be rubbing off on cast and crew as well. A few months ago, a member of the directing crew made a pass at a reporter visiting the set for a magazine story on Parker. "I'm sure there are a hundred tales to be told from that set," laughs the reporter. "It's coed. There are young beautiful men and women everywhere."

Along those lines, last week we caught actor John Corbett canoodling and clinking beer bottles with actress/model Bridget Moynihan at a Chelsea watering hole. (Moynihan plays Mr. Big's new wife, Natasha; Corbett plays an object of Carrie's affection beginning in Episode 5.) Corbett was so inspired, it seemed, by his portrayal of the amorous Aidan, that he pulled down his jeans in front of this reporter to prove that he wasn't wearing underwear, adding that he was having the time of his life on the set. Ah, yes, summer in the city.

"The show is definitely more crass and has become more of a fantasy than it was," says ex-sex columnist Amy Sohn. author of "Run, Catch, Kiss." "The truth of the matter is, when I sit down with my female friends we talk about how we feel, and the tenor of the conversations is not that X-rated. So to women it's alluring because we would like to think we're as salty as the women on the show are. And at the same time it functions as a fantasy for men because men are really easily aroused when women talk dirty."

Blame it on the show's creators, who have written the Kim Cattrall character of Samantha Jones as the brazen hussy to end all brazen hussies. "I don't think a guy has ever gotten me that wet," Samantha gushes to the girls after the aforementioned fireman fling. "And let me tell you about his cock!" In fact, if episodes 1 and 2 are any indication, this is the season Cattrall, 43, will finally shrug off the monkey that was "Mannequin." Her role not only demands precise comic timing and sharp delivery, but nerves and buns of steel as well (she seems to disrobe in every episode).

"Kim is absolutely amazing. She just purrs in that role," says Degen Pener, entertainment editor for Details magazine and an avid fan. "She likes to get it and she likes to get it a lot. And she's not apologetic about it." Cattrall is such a knockout -- in talent and titillation -- that the show's producers may have a Christine Baranski/Cybill Shepherd situation on their hands if she continues to upstage Parker.

But forget the great one-liners and you've still got a show that consistently raps the upper registers of the raunch radar, if only because of the peculiar predicaments it presents. Take, for instance, anal sex. Or what to do when your lover's penis is too big (smoke a joint and pray for the best). Or the best way to respond when your charming and attentive new boyfriend wants to take a shower with you ... and get peed on. As the show's creators seem well aware, cross-dressing and blowup dolls are passi, too 20th century. Real men nowadays want it all: the beautiful woman, the successful career, the golden shower.

"I think the show is strongest, and appeals most to women, when the show's writers pinpoint things that haven't really been talked about before," says Sohn, who points out how gleeful she felt when Carrie discovered that her ex's new wife couldn't spell. "In the same way 'Seinfeld' tapped into the self-centeredness of people, 'Sex and the City' taps into certain things women care about and focus on. And viewers feel cool that they 'get it.'"

"They go after a lot of topics many people would never touch with a 10-foot pole," says Pener. "And I hear people talking about it constantly. People stay home to watch, or tape it and pass around tapes. I think for better or worse we're coming out of an era when people were really worried and scared of sex. And the show is a positive force in terms of opening up certain subjects and making them easier to talk about." He laughs. "I mean, I can't imagine that we're going to see any fisting on the show. But, hey, maybe I missed that episode."

But where's the beef? After two seasons of female flashing and risqué behavior, some viewers have begun to wonder where the wood is. Sure, boy butts have made appearances (in fact, Corbett says he'll be baring his in a future episode), but they're no big deal: Mel Gibson's been flashing his forever. How can a show about women and sex, particularly one about their fascination with and need for men, not show a single shaft?

"American television is the most prudish in the world," sighs sex and relationship therapist Mira Kirshenbaum, author of "Women & Love" and another "Sex and the City" devotee. "But in this country, a naked woman shown frontally is art. A naked man frontally is porno." True, but this is not TV, this is HBO, the channel known for its "Real Sex" series, the channel that last year produced and aired a documentary all about penises called "Private Dicks." (Full disclosure: This reporter worked on the film.) So, again, we ask, where's the beef? "That's a very good question," says one HBO executive, who asked not to be named. "We've aired 'Boogie Nights' countless times, including the Marky Mark money shot, so you'd think there'd be an occasional dick in 'Sex and the City,' if only in the episodes that are focused on them. But you only see penises in arty French films, and we don't air arty French films."

"The penis is like the Wizard of Oz," explains "Private Dicks" producer/director Meema Spadola. "It's like, 'Do not look at the great and terrible Oz!' Like the Wizard, the penis can never measure up to the image we have in our minds."

Spadola, who also directed a documentary called "Breasts" for the cable channel, says HBO "totally supported" the nudity in "Private Dicks," but that "in reality, documentaries are treated very differently from fiction. We're allowed to be a little bit more risqué. But I hope the producers of 'Sex and the City' will step on up."

"They might as well," adds Sohn, "after doing those ads with Sarah Jessica wearing that dress. She looks like she's getting fucked by the Empire State Building!"

Reports also claim a pregnancy for one of the characters is scheduled for later this season, as well as a wedding, and Chris Noth's Mr. Big will make a return appearance. And even though this Sunday's "Boy, Girl, Boy, Girl" episode features a female-on-female kiss, things may calm down a bit -- emphasis on the "bit."

"As the season progresses you can expect to see episodes more focused on relationships," says a recently departed member of the production team. "But the raciness won't go away. I mean, Samantha will still have a nude scene in almost every episode."