The latest leaked charges against Al Gore are more the product of partisan politics than any new hard evidence. 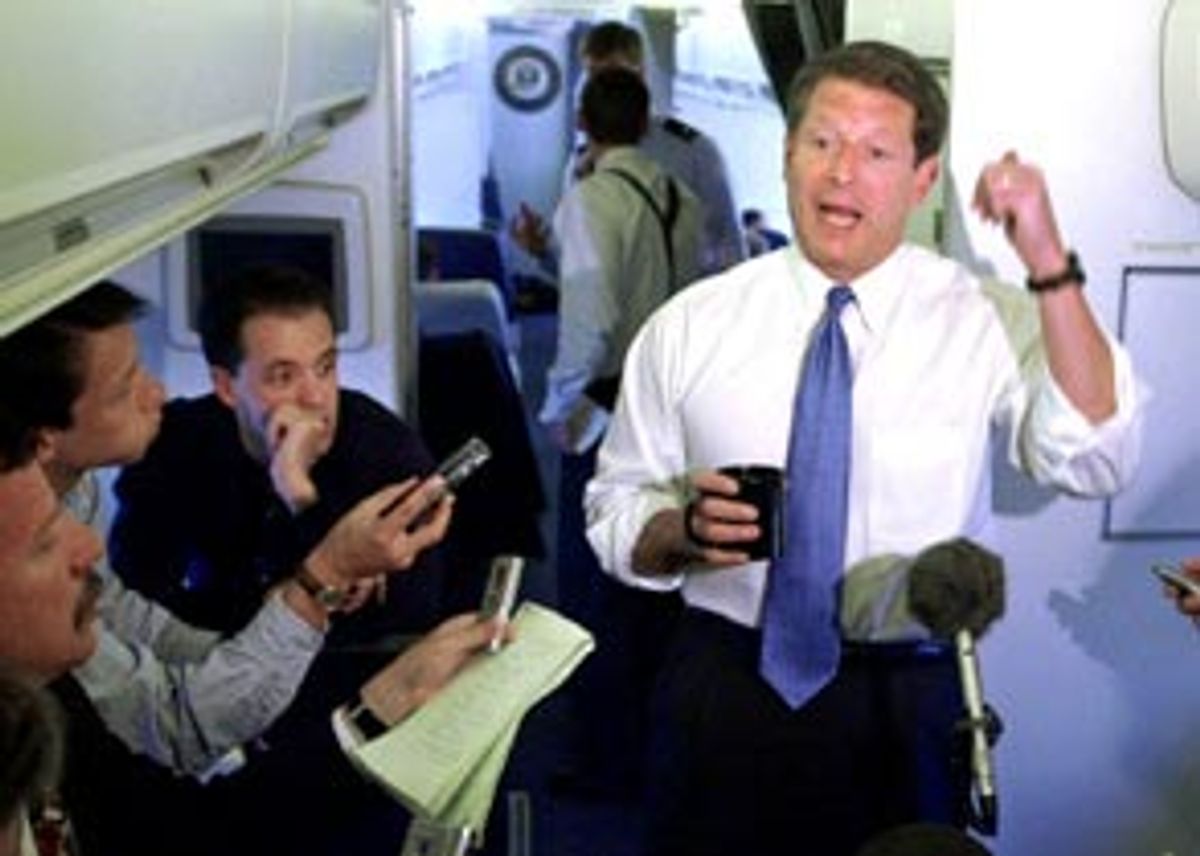 As we ought to have learned from costly experience with the failed Whitewater, travel office and FBI files investigations, illegal leaks and partisan rhetoric can make headlines but they can't make a case. Of course, that doesn't matter much to the Republicans who are so nakedly scheming to bully Attorney General Janet Reno into naming a special counsel to investigate Al Gore. He is the Democratic nominee for president and they will deploy any tactic to discredit him.

Until we learn what "new evidence," if any, exists to support Justice Department attorney Robert Conrad's preliminary recommendation for a special prosecutor, the current flap is nothing more than a tired rerun of an old flop. Without fresh proof of wrongdoing, there is no more reason today than there was two years ago to believe that Vice President Gore raised funds illegally during the 1996 campaign -- or that he lied about the controversy later.

In fact, as Roger Parloff pointed out in an exhaustive analysis published by American Lawyer last month, the case against Gore has grown weaker rather than stronger. The successful prosecutions of Democratic fundraisers, including the chief organizer of the famed Buddhist temple event, have turned up no testimony or documentation implicating Gore in the illegal contributions to the 1996 Democratic campaign.

Quite the reverse: Everything on the public record so far indicates that Gore thought he was attending a "community outreach event" at the temple, not a fundraiser. That key distinction was blurred in a screw-up by Democratic activists who canceled a separately scheduled fundraiser at the last minute and mistakenly merged the two events. So in the absence of proof to the contrary, the fair presumption remains that the vice president spoke truthfully when he said he knew of no effort to collect money from Buddhist nuns, let alone about any scheme to funnel contributions through them in defiance of federal law.

The second relevant question for the Justice investigators concerned whether Gore knowingly raised "hard money" as well as "soft money" when he called Democratic contributors from his office. Conceivably, his fundraising calls to party fat cats might have violated the Pendleton Act, a little-used 1883 statute designed to prevent shakedowns of federal employees by elected officials. As yet we have seen nothing new on that score, either. At worst Gore's conduct constituted, as FBI director Louis Freeh acknowledged in his own confidential memo urging the attorney general to appoint an independent prosecutor, a "technical violation."

Now, unable to establish that Gore did in fact break the law, certain unnamed Justice officials have told reporters that they think the vice president lied about his knowledge and action. They are pumping insinuations of perjury into the highly receptive news media. But again, the evidence to support a perjury investigation of the vice president is thin and ambiguous, according to memos provided to Reno by senior officials at Justice.

There does seem to be something suspicious going on here, however. Why did a preliminary recommendation by Conrad, the lead attorney since last December on the Justice Department's Campaign Financing Task Force, leak this information now, at a moment of political vulnerability for Gore? Why did Sen. Arlen Specter convene a press conference so swiftly to confirm that leak? And by the way, who is Robert Conrad Jr.?

The answers to the first two questions seem obvious enough; the latter, however, is considerably more interesting. Identified in most news stories simply as "a federal prosecutor" or "Justice Department attorney," Conrad appears to be a product of the ultra-right-wing Jesse Helms machine in North Carolina. He was hired in 1989 to serve as an assistant U.S. attorney in Charlotte, N.C. by U.S. Attorney Tom Ashcraft, who himself had formerly served as chief legislative assistant to Sen. Helms.

Moreover, federal election records show that in 1996, a Robert Conrad Jr. of Charlotte, N.C., listing his occupation as "attorney," donated $250 to the Helms reelection campaign. Although there is no legal or bureaucratic restriction against such donations by federal prosecutors, many if not most avoid giving money to politicians while in office to avoid any hint of partisan bias. Calls to Conrad's office to confirm that it was he who contributed the money to Helms were not immediately returned.

Even if Conrad turns out to be a true-believing Helms acolyte, of course, that doesn't necessarily mean he would abandon fairness in pursuit of Al Gore. Regardless of his own ideological slant, the prosecutor might consider it his professional duty to seek a special counsel investigation of the vice president.

Still, the prospect of partisan influence here is disturbing. And far more troubling than Conrad's political pedigree would be the discovery that he was somehow involved in divulging his recommendation to the press -- a judgment which must await Reno's reported plans to investigate that leak.

The notion that Janet Reno is covering up for Al Gore is ludicrous on its face. She has consistently requested independent counsel investigations of the Clinton-Gore administration where such action was warranted (and sometimes where perhaps it wasn't). So far she has determined that there isn't enough evidence to initiate a special probe of the vice president. If new and credible information emerges she may change her mind. But the current campaign of leaks and press conferences, clearly designed to intimidate the attorney general during an election year, is disgraceful. Reno has vowed to ignore it, and she should.