Bounced from astronaut training because of their gender, the Mercury 13 get no respect. 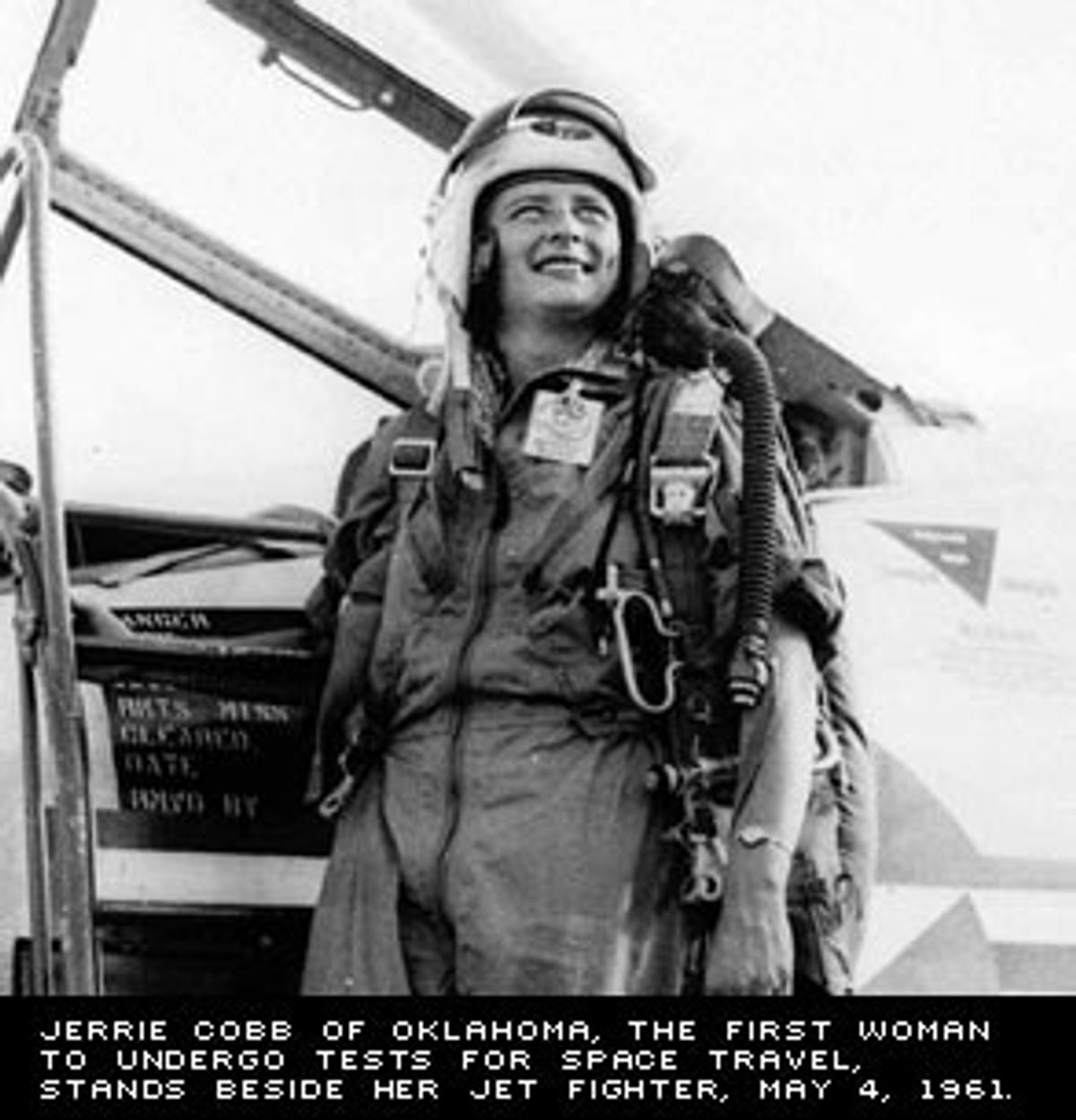 Earlier this month, Congress cleared the way for the crew of Apollo 11 to receive the Congressional Gold Medal. It is the culmination of official recognition for the men of the first moon mission, whose past honors include White House receptions, Smithsonian exhibits, a commemorative stamp and an action toy of their spacecraft.

Someday, if they're very lucky, the Mercury 13 flight crew might get to be an answer on "Jeopardy." The question? "What prospective group of astronauts became astro-nots midway through their testing for the job?"

It would be the highest honor that the group of would-be astronauts has ever received, despite their historical achievements and a brush with fame. "I'd like NASA to stop denying the contribution we made and were prepared to make," says Jerri Sloan Truhill of the Mercury 13 group. "Instead they treat us as interlopers, invading their space."

It figures. The Mercury 13 comprised a bunch of amazing women whose timing was all wrong. Pilots handpicked in the early '60s to be potential space cowgirls, they aced a series of physical tests designed to determine their suitability as astronauts, in some cases tests more rigorous than those given to men. Despite extraordinary performance in all categories (perhaps in spite of it), they could not clear the political hurdle presented by their gender. To quote John Glenn, testifying at a 1962 congressional hearing on official astronaut qualifications: "The fact that women are not in this field is a fact of our social order."

Three years before that hearing, Randolph Lovelace II, chairman of NASA's Special Advisory Committee on Life Sciences, had just selected Glenn, Alan Shepard and the rest of the famed Mercury 7 astronauts. He was curious to know whether female pilots could measure up to the same rigorous tests that the men had taken at his clinic in Albuquerque, N.M. The space race was in full swing and if America couldn't beat the Russians in sending a man into space, thought Lovelace, then why not send women?

Lovelace asked Jerrie Cobb, a celebrated woman pilot out of Oklahoma, to come to Albuquerque to take the initial round of exams and to help him identify other women who might make the grade.

The tests were not easy. Many of today's female astronauts say their own tests pale in comparison to those taken by the Mercury 13. Some 50 different exams measured the women's physical strength, conditioning, endurance and adaptability. They endured nearly 100 X-rays, drank radioactive water, swallowed rubber hosing, had their ears injected with freezing water to trigger disorientation.

At times the performance standards were higher for the Mercury 13 than for the men of the Mercury 7. Funk cites the sensory deprivation test she took as a case in point. Clinicians confessed to her that the "dog dip" was longer and more isolating for the women than it was for the men.

The test required that Funk float in an 8-foot tank of warm water -- a tank located in a small, airtight room with no sounds, no smells, no stimulation of any kind. The objective of the test was to measure how soon a subject might become dysfunctional and whether hallucinations set in.

The men were tested for three hours; Funk floated for 10 hours and 35 minutes, never hallucinating and only "sneaking a couple of quick naps." Women, the doctors surmised, could endure more deprivation than men.

(Funk later passed a centrifuge test in which she blew the minds of attending Marines by taking a full five G's without blacking out, even though regulations did not permit her to borrow a regulation G-suit. Unbeknown to the men present, she was wearing a full-length "merry widow," an old-fashioned cinching girdle borrowed from her mother, for support.)

Test results for the Mercury 13 were outstanding -- better than anyone expected, better on some tests than the men's. Donald Kilgore, who assisted Lovelace at the clinic, recalls that Funk and Cobb, in particular, were extraordinary candidates and "would have made excellent astronauts."

Lovelace was ecstatic and hurriedly worked to set up the next phase -- flight training -- at the Navy's aviation medicine school at Pensacola, Fla. But a hitch developed. The Navy wanted NASA to officially sign off on the project that Lovelace had begun out of his own curiosity. Delays set in. Tests were rescheduled several times.

Mercury 13 member Truhill recalls how frustrating it was to have the agency waffle. "I bought a ticket to Pensacola and had my bags packed," she says, her voice still filled with anger. "I was a mother. It wasn't easy to get things ready to go and then [be] dropped."

On Sept. 12, 1961, five days before the women were to report to Pensacola, Cobb received a phone call from Lovelace. The tests had been canceled. The other women received telegrams -- and no explanation.

Cobb plunged into action, first tracking down the Pensacola admiral who had rejected Lovelace's plan. The admiral sent Cobb to the Pentagon for an "official reason" for the rejection. She hopped a plane to D.C. and banged on doors until she found the chief of naval operations. "He told me," Cobb remembers, "that the tests were canceled because NASA did not want the tests run on women."

Today NASA is reluctant to say that the Mercury 13 tests were canceled as a result of its own sexism. According to Peggy Wilhide, a NASA spokeswoman, the agency was only following a federal policy set in place in 1959 by President Eisenhower that dictated that astronauts must come from the military.

Truhill sees it differently. She is convinced that NASA's sexism killed the program.

After the tests were scrapped, most of the women went back to their lives and jobs in the aviation industry, although some already had quit hard-won flying jobs to be available for the astronaut testing.

Cobb and Jane Hart carried on the fight, finally deciding to go public with their appeal and lobby Vice President Lyndon Johnson. LBJ was privately sympathetic to the idea of women astronauts but refused to publicly endorse their right to go forward.

The women kept pressing, and thanks in part to Hart's husband, Sen. Philip Hart of Michigan, a congressional hearing on official astronaut qualifications was set for July 1962. Cobb and Hart would represent the Mercury 13. Called to testify for NASA were space agency administrators and astronauts Scott Carpenter and Glenn.

Cobb began with a simple and eloquent appeal. "We seek only a place in our nation's space future without discrimination. We ask as citizens of this nation to be allowed to participate with seriousness and sincerity in the making of history now."

Rep. Victor Anfuso of New York, who served as committee chairman, turned Cobb's statement into a setup for a deeply sexist joke. "Miss Cobb, that was an excellent statement. I think that we can safely say at this time that the whole purpose of space exploration is to someday colonize these other planets, and I don't see how we can do that without women." The audience broke into laughter.

Day 2 of the hearings brought Glenn's testimony. He did nothing to advance the women's cause, echoing the prevailing theme that women had to be better than rather than equal to men. "If we could find any women that demonstrated they have better qualifications than men," he said, "we would welcome them with open arms." Again the audience roared.

Day 3 of the hearings was canceled. The congressmen had heard enough and ruled that future astronauts would come from the ranks of military jet test pilots. Since no women were allowed to train as test pilots until a decade later, the policy officially slammed the door shut on the Mercury 13.

After the hearings, the women dispersed. Cobb began piloting humanitarian medical flights to the Amazon rain forest. Hart went on to become a founding board member of the National Organization for Women. Truhilll returned to her aviation business in Texas. Funk became one of the first women investigators for the National Transportation Safety Board and Federal Aviation Administration. And Lovelace died in a plane crash.

Of all the members of the Mercury 13, Cobb and Funk have never completely given up their hopes of going into space. Cobb plays the inside game and patiently petitions NASA year after year. Most recently she used Glenn's 1998 return to space, ostensibly to conduct "age-related" experiments, to renew her bid. If you want to send older people into space, why not a woman who has been standing in line for 40 years? she asks. So far, NASA has not been persuaded.

Funk has given up on NASA. She has "thrown it a fish," she says, using a favorite phrase from her Taos, N.M., upbringing. After four formal applications to the Johnson Space Center astronaut program and four impersonal "not interested" replies, Funk is pursuing other paths. She has signed on for one of the upcoming commercial space launches and is scheduled to blast off in 2003.

Just this week, the 61-year-old Funk returns from Russia, where she has been training at the old cosmonaut facility in Star City. Strapped for cash, the Russians have opened up their fabled training site to paying customers. What American sexism denied Funk, Russian capitalism has now offered her. "I'll take it any way I can," she says, fully aware that her 2003 launch -- which has been rescheduled multiple times -- could still be scrubbed.

Eileen Collins, who in July 1999 became the first woman to command a space shuttle mission, is still astounded by the history of the Mercury 13. "I cannot fathom anyone saying that we don't want women," she emphatically states.

She made sure that the Mercury 13 were included on the guest list for her launch last summer. Seven of the 13 gathered at Cape Canaveral, Fla., to see Collins off, and the commander went out of her way to acknowledge them with applause and a salute.

Few other people knew who they were.

Martha Ackmann is a women's studies professor at Mount Holyoke College in Massachusetts..