A first-time novelist summons up the violence and terror of Uganda under Idi Amin. 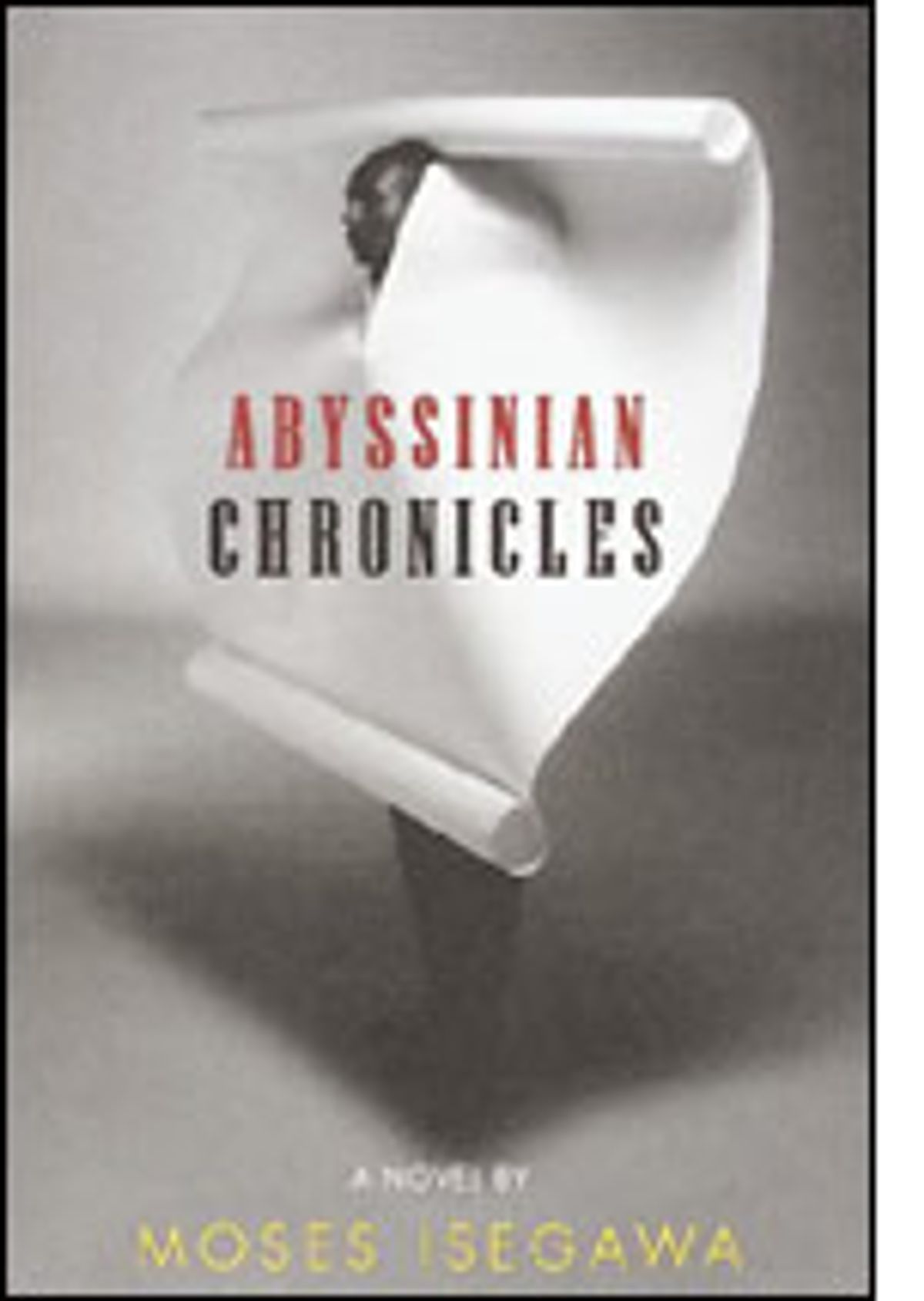 Big, bulky and messy, "Absyssinian Chronicles" arrives with all the lumbering grace of a buffalo. Not that Moses Isegawa's saga of late 20th century Ugandan life isn't full of fascinating material. Idi Amin, for example, plays a pivotal but passing role, galvanizing the middle of the book before the crushing family dynamics of the main plot overtake his story. But Isegawa's unwieldy first novel sags under the weight of the multiple, competing strands of narrative, both familial and national, and it's the explosive social landscape that's ultimately more interesting.

Mugezi Muwaabi, the restless narrator, and his calamitous, far-flung family are never quite as gripping as, say, the characters of Somali novelist Nuruddin Farah. But as Isegawa's title suggests, the book is an ambitious attempt to capture the pathos of an entire country. "Uganda was a land of false bottoms where under every abyss there was another one waiting to ensnare people," Mugezi's father postulates, "and the historians had made a mistake: Abyssinia was not the ancient land of Ethiopia, but modern Uganda."

The overburdened story takes the form of a long, winding journey. Mugezi is born in 1961, a year before Ugandan independence (like the narrator of Salman Rushdie's "Midnight's Children," he's practically the same age as his country), and grows up in a village compound dominated by his grandfather, a clan elder of fading power, and an assortment of troubled relatives. But Mugezi rails mainly against the tyranny of his parents: his father, misleadingly called Serenity; and his mother, whose nickname, Padlock, crudely reflects her born-again rigidity. They are the "despots" against whom Mugezi wages his own "guerrilla war," while his younger siblings, whom he has to clean and care for, are "the shitters." Thus are hatched the two principal metaphors Isegawa flogs all through the book: Growing up in this household (and, more generally, in Uganda) in the '60s and '70s, Mugezi laments, is to be tyrannized and shit-smeared.

In time the family moves to noisy, crowded, overheated Kampala, a "brewery of motion, dreams and chaos." Amin has taken power in 1971 -- at first hero-worshipped by Mugezi as an answer to the smug authority of his parents as well as of A. Milton Obote's corrupt government, but soon recognized for the power-mad monster he is. ("Inside him growled the whales of dominance.") In illuminating flashes, Isegawa describes Amin's "Africanization" campaign and the painful expulsion of Indians from the country. Here, in the Kampala of the '70s, culminating with Amin's fall in 1979, Mugezi watches his nation come undone; as he observes, "There were far too many fault lines along which seismic activity could erupt." And later, looking back: "These were some of the saddest days in the history of the country; worse things had occurred, but it was the small happenings that exposed the extent of the rot."

The rot continues through the '80s, with the abuses of Obote's reinstated regime, the protracted guerrilla fighting in the Lowero Triangle region, the pillage and rape of the country and the new specter of AIDS. Mugezi's years at seminary school and Makere University are so colored by the violence in the country around him that he speaks even of his tainted love affairs in the language of warfare: "Lovemaking itself is an act of war, an expression of the tension ripping the country apart"; "As I thrust deeper into the marshes of love and the triangle of life ..." As you can see, metaphors working double duty can wear thin pretty quickly.

After so much experience -- and so many characters and so much digression -- a reader may feel a bit cross-eyed. Unlike Rushdie's masterful epic, and unlike Gabriel Garcma Marquez's "One Hundred Years of Solitude" -- two novels the book has been compared to by effusive reviewers in the Netherlands, where it was first published and where Isegawa now lives -- "Abyssinian Chronicles" doesn't quite synthesize the jumble. Instead, the reader is left, like Mugezi at the end, alone, a bit wobbly and haunted from such a long journey.