Thanks to the likes of Limp Bizkit, Pearl Jam and Britney Spears, concert prices are coming down. So why are those damn ticket fees still going through the roof? 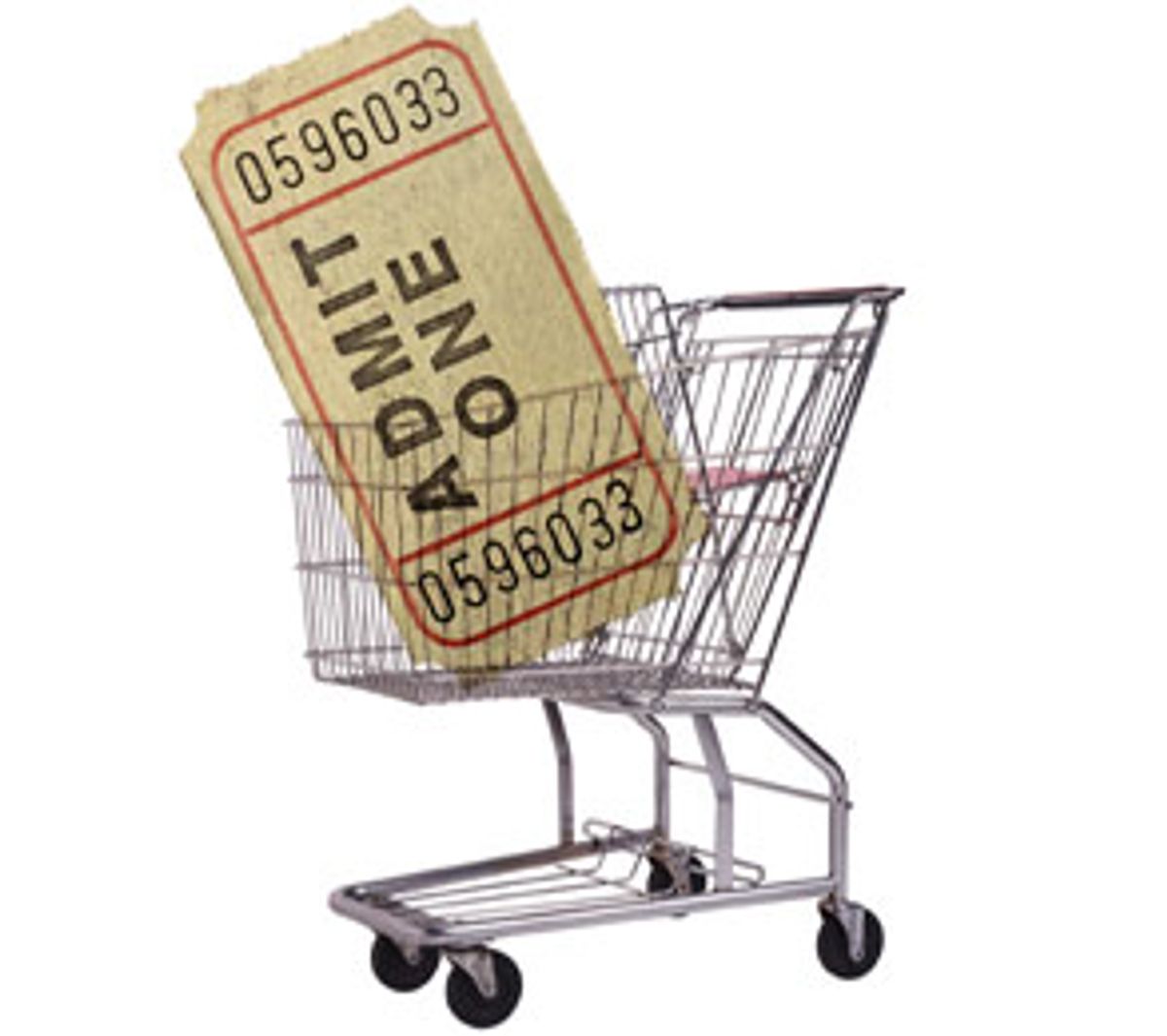 As music fans queue up for their favorite summer concerts, there's an unmistakable smell of conflict in the air.

A surprisingly large number of artists -- Phish, Britney Spears, Pearl Jam, Red Hot Chili Peppers, Creed, the Dave Matthews Band, the Dixie Chicks, Third Eye Blind and Christina Aguilera, among others -- are working hard to keep ticket prices down (a relatively modest $30-$40). Even old-timers like Bob Dylan, the Allman Brothers and AC/DC -- acts who usually charge more (since their fans skew older and have more cash on hand) -- are on the road with ticket prices that max out around $40.

Meanwhile, concert industry middlemen are showing little restraint: Their notorious service fees have escalated to as high as $9 per ticket. The result? While fans catch a break via some forward-thinking artists, their wallets are deftly picked before they ever stroll into an arena.

Why the disparity? According to promoters and building owners, the artists' nightly take has become so large it leaves the middlemen scrambling for other ways to make money. In other words, service fees -- originally created to cover the cost of placing a ticket order -- have become a robust revenue stream.

"It's a profit center," explains one industry source. "Now they have an incentive to raise service fees." The "they" here is SFX Entertainment, the concert industry behemoth that's come to dominate the business over the past three years by snapping up most of the major summer amphitheaters ("sheds" as they're known in the trade). SFX is promoting nearly 30 tours this year, including summer swings by Spears, KISS, Steely Dan and the George Strait Country Music Festival. By the end of the year, SFX will have its hand in over 3,000 shows. Meanwhile, SFX itself is in the process of merging with FM radio giant Clear Channel Communications in a $4 billion deal. So much for the concert business' mom-and-pop days.

Industry talk suggests that when SFX and Ticketmaster struck a deal in late '98, a deal in which SFX agreed not to challenge Ticketmaster by creating its own ticketing company, SFX was freed to pocket service fees above a certain level (around $4). Let's put this in practical terms: For a sold-out Sting show that attracts 15,000 fans, a $7.50 per ticket service fee and a $3 facility fee lands SFX $100,000 long before the first note is played -- or $6 beer sold. (Facility fees are exactly that: You pay for the honor of entering a venue. Some facilities now charge as much as $5.50 per customer. And no, that doesn't always cover parking.)

A Ticketmaster spokesman had no comment. SFX's senior vice president Mitch Slater confirms that his company's cut of Ticketmaster's service charge has become a helpful revenue source. But he insists, "There is a sense of responsibility not to charge ridiculous fees."

Amid all this corporatization, some acts are bucking the trend. Though a $40 concert ticket is hardly a free pass, it's a low price compared to other entertainment events. A brief list: Major League Baseball's All-Star Game ($150); a road production of Disney's "The Lion King" ($120); a preseason Los Angeles Lakers NBA game ($100); a New England Patriots football game ($75). After looking at this menu, a two-hour concert from a platinum-selling act stacks up pretty well. (Or, in the case of the Metallica/Korn/Kid Rock summer tour, three multiplatinum acts for $65.)

"These younger acts are all making a point of not letting prices get crazy," says Phoenix promoter Danny Zelisko. "I hope they continue to do it because that means more people will come out to shows."

If you're looking for a poster band for this Summer of Love, look no further than Limp Bizkit. The aggro-rock band will launch a completely free, 10-city tour next week. Though the controversial music-swapping company Napster is picking up the $2 million tab (a move well worth the free press from Limp Bizkit's decision), it's hard to recall the last time a rock act at the top of its game comped its fans nationwide.

Still, much of the credit for the current bargain-basement craze goes to the pop stars over at Jive Records -- the Backstreet Boys, 'N Sync and Spears -- and the low ticket prices they've been setting for the past 12 months. With combined sales of more than 20 million CDs, the groups could literally charge whatever they want. "We could charge $150 for Backstreet Boys and 'N Sync, no problem," says Mitch Slater at SFX, "because every parent wants to buy them for their kids."

Despite their power, these acts have regularly gone out with $30 and $40 tickets. "Their business people are just being smart," says Zelisko. With such a reasonable ticket, acts can return to the same market repeatedly and still do strong business. Another trick: "Those Jive acts sell their tickets so far in advance that by the time the show rolls around you forget you've spent the money," says the Phoenix promoter. "So you'll buy a T-shirt and key chain. Pretty soon it's a $100 per-head night."

That's not to say the entire summer is on sale. Some baby boom favorites are still targeting Gold Card consumers. Sting, Tina Turner, Steely Dan, KISS, Neil Young, the Who and Don Henley are all flirting with $100 tickets. (Notable boomer exceptions include Jimmy Buffett, Santana and Bruce Springsteen and The E Street Band, who are getting from $50 to $70.) Diana Ross and the Supremes' reunion tour is asking $250 for its best seats. (And more often than not, hearing "no" according to promoters.)

Just in time, too. According to the concert trade magazine Pollstar, the average ticket price rose an astounding 30 percent from '98 to '99, while overall attendance decreased. The business may have celebrated a $1.2 billion year in '99, but it managed to lose customers.

But if some acts are conscientious enough to keep their ticket prices low, why do they tolerate runaway fees, which often add 30 to 50 percent onto the price of a ticket? After all, the tacked-on charges are spelled out in advance, so acts can't claim ignorance.

Managers and promoters aren't saying, but here's the assumption: With artists pocketing such generous guarantees ($600,000 a night for KISS; $1 million for an 'N Sync stadium show), they realize they need to cut the middlemen some slack. "They figure we can live with the fact that they're getting facility and high service fees," says one source, adding, "It's curious why groups don't go to Ticketmaster and say 'I'm playing SFX buildings but I want to do things on my terms.'"

Then again, look at what happened to the last act that made a stink about ticket fees. Half a decade ago, with the band at the peak of its grunge power, Pearl Jam put service fees under the microscope, refusing to tour in venues that had exclusive contracts with Ticketmaster. Lead singer Eddie Vedder felt the company fleeced fans by charging indiscriminately high service fees, back when $5 per ticket was the usual ceiling. ("That seems like the Ice Age," quips one touring pro.) Company officials responded that Ticketmaster worked in conjunction with building owners and promoters when it came to setting fees; Ticketmaster, which had to cover its operating costs, claimed to receive a relatively small portion of those revenues.

The band scrapped one tour; the following year it hired an upstart ticketing company called ETM, which charged roughly $3 service fees, and tried to bypass Ticketmaster's established venues. But halfway through, bogged down in a logistical nightmare of routing a tour around established Ticketmaster venues and into parks and old racetracks (as well as Vedder's health problems), the tour collapsed.

There's no doubt who won that titanic battle: Five years later, Pearl Jam is preparing to kick off a new summer tour in August. It will be handled by Ticketmaster. What happened to ETM? The company announced last week that it was going out of business; Ticketmaster was buying up its assets.

Pearl Jam has not entirely lost its fighting spirit. The band will price tickets at $26 and $30, among the cheapest of any multiplatinum act in the country. But what about those bothersome fees? Let's take the fan who buys a lawn seat for Pearl Jam's Aug. 27 show at the Saratoga Performing Arts Center in upstate New York. He'll face a $6.05 service fee, a $5.50 facility fee and a $3.50 handling fee. That $26 ticket suddenly costs $40.80 -- a 56 percent increase over the ticket's face value.

How about the Spears fan who snatched up a $22 lawn seat for the pop sensation's June 21 show at Merriweather Post outside of Washington, D.C.? Tack on the $3 per ticket parking fee, the $7.50 per ticket service fee and Ticketmaster's $3.25 handling fee (even though the tickets weren't mailed out, but merely left at the venue's will-call window), and that $22 ticket cost $35.55, a 59 percent increase.

"And those are charges you must pay before you walk in the door," points out one concert veteran. "As opposed to buying that Coke or T-shirt."

For acts who aren't working to keep ticket prices low, the service fees are head-turning. KISS at Irvine Meadows in California? $9.95 service fee per ticket. The Who at Nissan Pavilion in Bristow, Va.? $10.95 per ticket. Diana Ross and the Supremes at the National Car Rental Center in Fort Lauderdale, Fla.? $15 per ticket.

Of course there's no reason it would cost Ticketmaster more money to spit out a $125 Who ticket than a $32 Creed ticket. But the industry's unwritten rule has always been the higher the ticket price, the higher the service fee.

For now, at least, as the economy hums along and disposable income piles up, fees aren't stopping anybody from getting to the shows. Says one source: "Nobody squawks."