The story of a young prostitute

A teenage call girl gets her "parenting" wherever she can find it. Part 1 in a series. 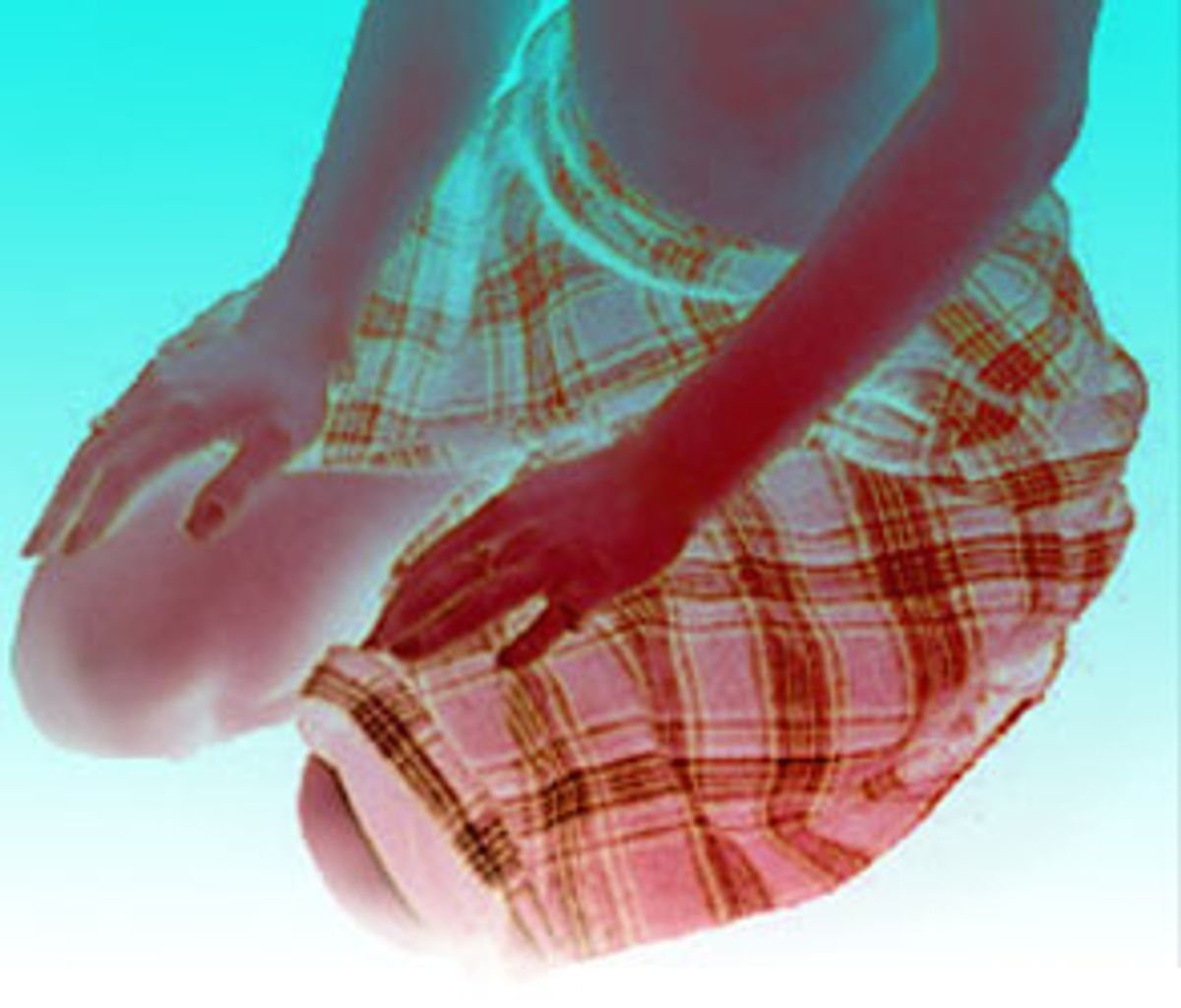 He's 55 and she's 19. On their first date, more than two years ago, he took her out to dinner and asked her all about her life and her aspirations. "I told him how dysfunctional my family was," she remembers. "And he said, 'OK, let's go back to my place and I'll just play with you. I'll give you $250 if you just let me play with you.'"

Mary Lou is a tiny redhead with huge brown eyes, clear pale skin and a few freckles on her upturned nose. She looks about 16; her face flits from cute to beautiful when she smiles. As she talks about her life as a call girl, she pushes her food around the plate and nervously taps her tongue ring against her teeth.

She said yes to the play date because she needed money for crack cocaine. "We went back to his house and ... he just wanted to look at me naked and touch me and kiss me and say dirty things to me ... I didn't know how to pretend I liked it, so I was tense and rigid. I think he liked that; he knew I'd never done it and it was like breaking my cherry or something."

The 55-year-old kept calling, and the next time she saw him, Mary Lou went all the way. As he screwed her, she "thought about movies where girls are being raped or being prostitutes and they put themselves in another place, like on an island or some other happy place ... I got through it by thinking about crack. It was disgusting, but I kept saying, 'I can go get some rock right after this.'"

From the heights -- or depths -- of dissociation, she also marveled at her new job title: "I lay there thinking, 'Now I'm a crack whore.'"

In the two years since, she has continued to see the 55-year-old once a week. He has taken her to the Caribbean, helped her get off drugs, protected her and managed her career. When Mary Lou sees a new john, she calls her benefactor immediately before and after. Though he has expanded her business by introducing her to new clients, he has never taken a cut of her earnings.

This man, whom Mary Lou refers to as the "first guy" throughout our three-hour lunch, is also the only man she enjoys sex with. "He's the only one who can get me off sexually, the only one who helps me when I need it," she explains. "He asks me, 'How you doing?' and now after we have sex, we'll talk for hours.'"

Theirs is not the "Pretty Woman" scenario of rescue and happily ever after -- First Guy is about to marry his girlfriend, who's around his own age. But he has looked out for Mary Lou more than any other adult has.

Between the play date and the second, crack-whore date, Mary Lou called her mother and said, "Mom, a man will pay me $250 to have sex with him. What should I do?" Her mother said, "Do it -- that's a lot of money. I wish I'd had an opportunity like that when I was your age."

Mary Lou is the product of a one-night stand somewhere in rural Virginia. She lived with her father until she was 12. Her mother didn't want her, she says, "until I was old enough to take care of myself, which she thought was 12 ... She's only 39 now and I think she thinks her childhood was stolen by having me so young."

Mary Lou's father was an alcoholic, and her stepbrother, five years older, sexually abused her from the time she was 6 until she moved to her mother's. "He would make me give him blow jobs and hand jobs and make me do that to the babysitter's kid, who was about my age. He completely controlled me my whole young life."

She escaped to her mother's and was on her own. "Nobody was telling me, 'Do your homework'; there were no boundaries, so I went crazy, so I started doing drugs and doing bad things." She lost her virginity when she was 13 to three guys at a party who, she says, "took advantage of me after I'd gotten too messed up to think clearly." The story got spread around school, with Mary Lou as the aggressor, and she became, in rumor, then in fact, "the slut."

She got kicked out before she could graduate from high school, but she studies her own experience like a natural-born scholar. "I'm into psychology and sociology and I've read books," she says. Her self-analysis is generally astute, even when it bleeds into justification and fatalism. "I know that people who grow up in functional families don't think, 'I want to grow up to be a prostitute.' Growing up with the abuse, never really having the care and love I needed as a growing child, I thought that the way to get a guy to like me was to sleep with him."

After her expulsion from school, she moved into an apartment in Washington, D.C., enrolled in secretarial classes and got a job at a diner. One of her fellow waitresses was Crystal, also 17. The girls discovered a shared love for LSD, ecstasy and ketamine. They began hanging out and Crystal turned Mary Lou onto crack. After smoking it about 10 times, Mary Lou "thought about it constantly," she says. "It drives everything else out of your head."

She told Crystal she needed more money. Crystal suggested prostitution and introduced her to First Guy, a former trick of hers. Once she began seeing First Guy, Mary Lou started budgeting waitress money for her bills and prostitution money for drugs. Surprisingly, she didn't get high before visiting First Guy, always saving it for afterward. "As soon as I was done with him, I'd get Crystal, and we'd go score some crack. I felt so ashamed and dirty, I had to get my brain to stop thinking now." Once the girls got high, "we would make fun of him, imitate the look on his face when he was coming and the noises he made. It was so funny -- we just cracked up."

Mary Lou says, "I hated him; I thought he was disgusting, a jerk, a pedophile." For the first few months, she says, "I connected sex with him, with my stepbrother's abuse and the boys at the party. I knew I was doing this because it happened to me at such a young age."

Mary Lou found First Guy's pillow talk especially hard to get used to. "When I would blow him, he'd say, 'Take that dick in your mouth, take it all, take it all,' and he'd keep saying it. It pissed me off! I'd yell at him, 'Fuck you, I am.' And he'd say, 'I'm sorry, I just have to say it to get off.' And when I realized he wasn't saying it just to demean me, it wasn't bad. But till then, it really bothered me."

Over time, his regard for her grew, which needled her even more than the smutty talk. "He liked that I had ambition and that I was smart. So one time, about three months after I met him, we're having sex and he says, 'What's in between your ears is as good as what's in between your legs.' And that hurt me so bad, I started crying. It was just a dirty thing to say. I'm proud of being an intelligent person and that he would compare between my ears to between my legs just seemed so mean."

But she began to stick around after his 45 minutes was up, talking for a while before leaving to score crack. After 10 months of once a week at $250 a pop, First Guy took her to his time share in the Bahamas. It was her first trip farther away than North Carolina, and Mary Lou calls it "wonderful, the most beautiful place I'd ever been. We had sex three times a day, and that's when I started to like it, maybe because of the whole romantic atmosphere, there by the ocean."

When they weren't enjoying her first-ever orgasms, she kept her jeans on, and First Guy asked if she had any shorts. She admitted she always covered her legs because they were bruised from shooting ketamine into them, bruises she'd hidden from him before in the dark. "It was the first he knew I shot up K. He started asking me about using drugs, asked if I was trying to escape reality or my lifestyle. I told him, 'I have a lot of anxiety issues and family problems that I try to escape. Plus it feels good to alter my reality.'"

As they talked, she looked around his condo and out the window at the beach. "I thought about how much money he has and how hard he works for it -- he's got five time shares in the Caribbean. And I thought, 'Do I want to be a drug addict the rest of my life, or do I want to have all this -- the money and the cars and the time shares?'"

So she quit drugs, vowing like Scarlett O'Hara to earn financial independence. She asked First Guy to introduce her to more rich old tricks and decided to up her price to $400. Back in D.C., he hooked her up with Guy 2, "who looked at my I.D. like three times," Mary Lou says, laughing. "He couldn't believe I was over 18. He was like 57 and he couldn't even get it up; he needs Viagra or something. I was only with him 20 minutes and I made $400 and he didn't even put it in me. I was like, 'This is all mine!' and I didn't spend any on drugs; I put it straight in the bank."

Guy 2 introduced her to Guy 3, her first trick in an expensive downtown hotel. "I got $450 for a blow job!" she crows. "He's in his 30s and nice-looking; it's better when they look nice. And it was so fun, I got room service; I'd never been in a nice hotel before."

She has added a few new clients, and she says, "The first guy kind of oversees everything; I never give him money, but he's kind of like a father figure. He helps if I'm in trouble or need a bit of money." But she feels entitled to more: "I want him to cosign on an apartment for me, but he won't ... That shows me where we're at: At any point, he could dump me."

She shows First Guy her gratitude by charging him less and by "letting him go where nobody else can go," she says, blushing. "You know, the butt. Which I don't see how any woman could like ... There were times when he was doing that and I would tell him to stop and he wouldn't, so I would start crying. But I would never let him see that I was upset. I want to seem like a strong individual."

Gloria Steinem said of her second-wave sisters: "We're becoming the men we wanted to marry." Mary Lou is similarly inspired to be as wealthy and powerful as her johns, but she never got much of a blueprint for success growing up. The closest she can get to independence for now is mutual exploitation.