My wife brings home the bacon

After she became a paper millionaire, I gave up on the workforce. 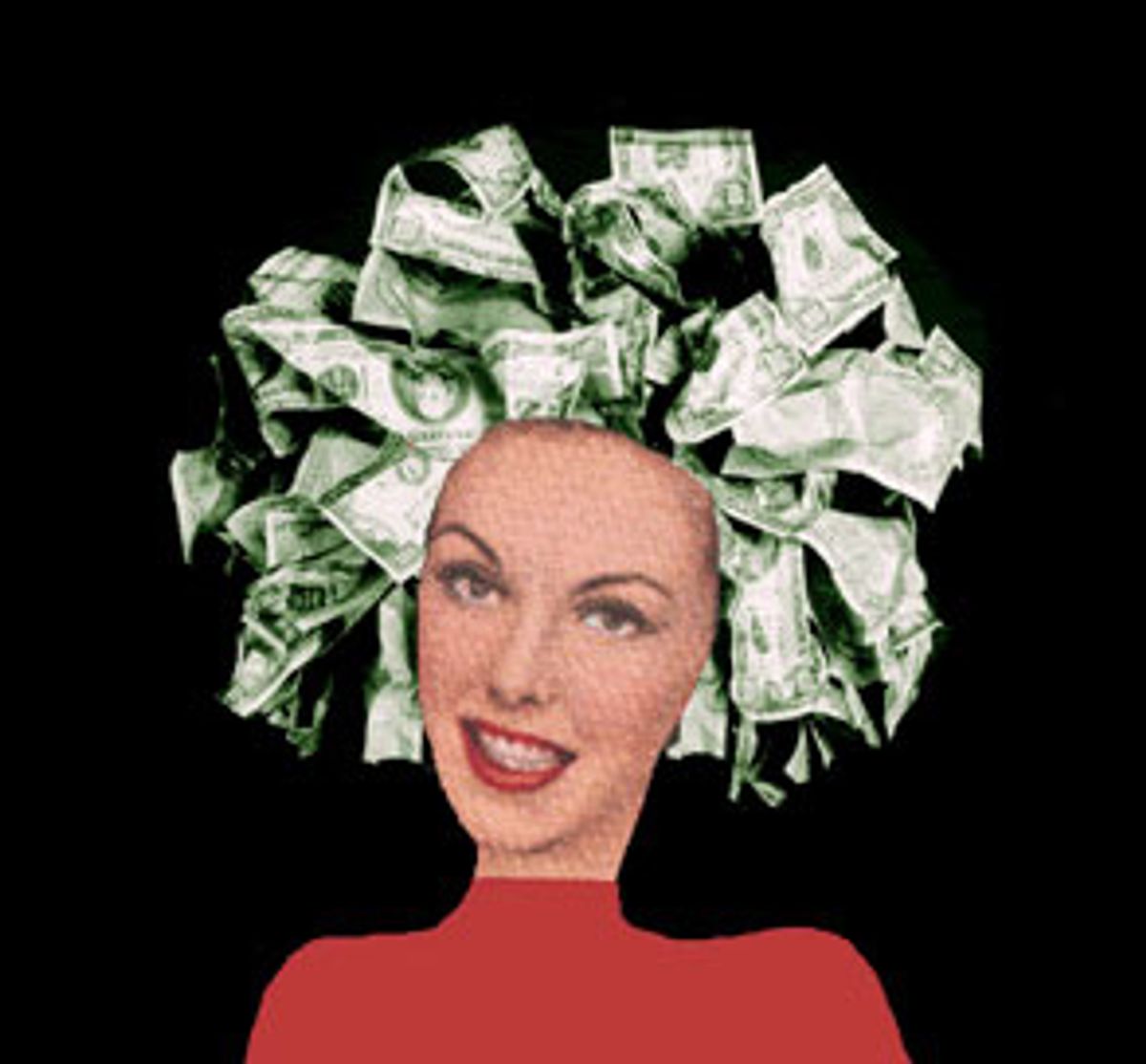 Fact is, she has always made more.

Through the years of raises and promotions (even with the occasional bonus) my salary never once -- not for a single pay period -- surpassed that of my wife.

And that fact never worried me. It never threatened me, never kept me up at night or made the back of my neck overheat in a panic of inadequacy. It didn't, that is, until her company went public and I was relegated to the diminished status of provider minor.

We were never really in it for the money. We'd chosen our professions for what we viewed as worthy work, a little credibility and a touch of faux glamour. We were doing what we'd always wanted to do in fields that liberal-arts majors coveted; we toiled for meager earnings among capable, young co-workers whose gainful employment was making their parents broke.

We didn't have such indulgent, deep-pocketed sponsors. In the early years, we'd both managed to squeeze by on freelancing, dining out on other people's expense accounts and the nighly promise of free pbti at one gallery opening or another.

By the time we'd moved in together we'd gained a certain tenuous financial stability, though we both knew that eventually we'd be expected to produce lump sums for down payments, obstetrician bills and tuition. And short of either of us unearthing a Francis Bacon painting in a dumpster, or penning a hot screenplay in our spare time, we'd probably never make enough on our chosen paths.

But what were we going to do about it? Draw straws and force the loser to get an MBA or just kick back in a state of denial and hope that our career karma would produce a windfall?

Then, fueled by restlessness with her job and a deepening disrespect for her boss, my wife gathered up her skills and took them online, joining a Web-based start-up as one of the first dozen employees.

She loved the work, respected the people she was working for (the first investment bankers she'd ever known) and before long was sweating metrics and dreaming up strategic partnerships in her sleep.

She was also talking the talk. "We just hired this kick-ass biz dev guy from HBS," she'd tell me over dinner. "HBS?" I'd say. "What's HBS?" "Harvard Business School," she explained. And this from a woman who thought the Bloomberg Group was a wedding dress shop in the valley. But she was working harder and longer than ever and seemed to be making the absolute most of her seemingly boundless job title. And still, she wasn't really in it for the money.

When the company went public -- back when Internet start-ups still went public -- I gave up every thought of ever achieving earning parity in this relationship.

On that fateful autumn day, when their stock climbed to a rather modest height of twice the opening mark, my wife racked up more than I could reasonably hope to make in a year or two or 10 -- that was in addition to her salary, which, need I remind you, was still greater than mine.

If money is an aphrodisiac and the ability to provide is still a seductive male attribute, the IPO was the fiscal equivalent of castration -- at least I was being well compensated for the loss of my testicles. Some insecure, small-minded, '50s-minded part of me felt cheated out of the opportunity to be the provider -- or at least one of them. I sort of imagined us struggling to scrape together a down payment on a house or sacrificing to send our unborn children to better nursery schools than we'd had.

Not anymore. Her paper worth -- and it's all paper worth to me -- made our slim savings laughably puny. On a good day, say when the NASDAQ is bouncing back or there are a slew of upbeat earnings to report, her www.nestegg.com makes as much on interest alone.

And rather than give me a sense of calm or freedom about my career prospects, it has done the opposite. I'm anxious and distracted; I feel an urgency to succeed and to succeed now. Part of me feels like I have to start kicking ass before my in-laws find out that in our two-person household, my salary is the modern equivalent of the pittance suburban moms once took home from working three days a week at the local rare-books dealer -- for vacations and family emergencies.

So I did what any insecure, ambitious young man does -- I quit my job.

Mr. Dot-Mom is the spouse of a real-life Internet executive he'd rather not name.