By Saturday, it could be Ross vs. Pat Buchanan for the Reform Party nomination. 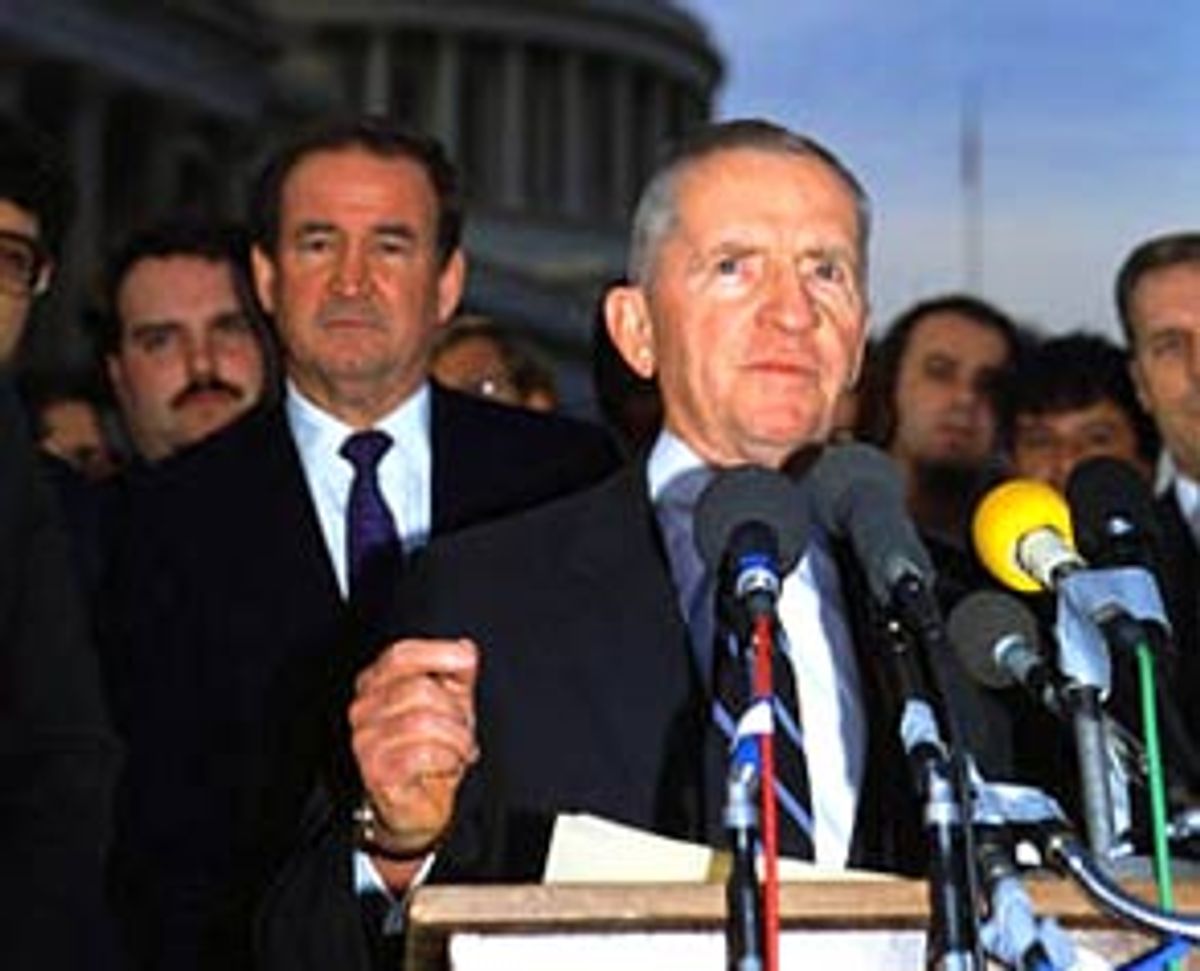 Allies of Reform Party candidate Pat Buchanan were scrambling Tuesday amid growing speculation that Ross Perot would allow his name to be entered as a candidate for the party's presidential nomination just before the deadline this Saturday.

Perot allies hinted to Salon Tuesday -- the Texas billionaire's 70th birthday -- that he may be leaning toward throwing his hat in the ring. "There is a group that has been working to get him on the ballot, and they are about to make an announcement," said Reform Party spokeswoman Donna Donovan, whose name is also listed on a Web site, along with other Perot allies, devoted to building support for his candidacy. "The Buchanans are right to be worried."

The effort to qualify Perot for the Reform primary ballot has been led by Ira Goodman, the former chair of the New Jersey Reform Party who resigned in protest after Buchanan's forces took control of the party earlier this month. Goodman maintains that he has had no contact with Perot, and does not know whether or not he will accept the invitation to run, even if his effort clears the way for a Perot candidacy.

"Well, let's put it this way," Goodman said. "We've done everything that we can to prepare the way for him to get into the race. Once I submit everything to the nominating committee it will be up to Mr. Perot." Goodman said he would submit everything to the national Reform Party before the Saturday deadline. But even if Goodman is successful in qualifying Perot for the ballot, the two-time party standard-bearer will have to give his OK to the head of the presidential nominating committee, Michael Ferris, for his name to appear on the ballot.

For now, Perot is keeping quiet. But his spokesman, Russ Verney, said he has had "no discussions about any hypotheticals with Mr. Perot." He did say, however, that Perot would consider the Reform Party nomination. He also said Perot might seek the nomination without launching a full-scale presidential run.

"This isn't about competing for the presidency," Verney said, noting that a Perot candidacy could not qualify to compete in all 50 states. "This would be about nominating Ross as somebody who would use the $12.5 million" -- in federal matching funds available to the party's presidential nominee -- "to advertise the issues that are important to members of the Reform Party."

Either way, Perot must make up his mind fast. According to party rules, the deadline for any candidate to qualify for the ballot is Saturday. Ballots for the party's mail-in primary will then be sent out to any voter who wants to participate in the primary. "We could expect an announcement on Friday," Donovan said.

Maryland Reform Party Chair and Buchanan ally Robert Bowes said he was tipped off to what he calls the "secret Web site," which he believes Perot forces have been using for several months to garner support for their candidate and orchestrate a possible Perot presidential bid. It includes a contact of Perot allies, a guide to the Byzantine rules of the party's presidential nominating process and a state-by-state posting of efforts to draft Perot.

Bowes was incensed that Perot may "piggyback" on the work the Buchanan campaign has invested in qualifying for the ballot to emerge and steal the election. He said that while the Buchanan campaign has invested tens of thousands of dollars to qualify for the ballot on its own, if Perot emerges as the party's nominee, it would be Perot's name on the ballot. Because of the party's quirky qualification process, individual candidates are responsible for securing their own ballot placement. But most states require what are called "party ballots," reserving a spot for the party's presidential nominee. Therefore, Perot could reap the benefits of Buchanan's work if he managed to wrestle the nomination away from Buchanan.

Essentially, Bowes charges, the draft-Perot movement found a loophole in the law, and is attempting to drive a Perot candidacy right through it. Bowes estimated that Buchanan has collected more than 800,000 signatures to qualify for the ballot thus far. Goodman estimated that he would need only "between four and six thousand" signatures to get Perot on the Reform Party ballot.

"Perot is just leeching off the hard work and success of Buchanan to put the party fully on the map in this chintzy, under-the-radar effort to get Perot snuck into this primary," Bowes said. "The question is, is this really some independent effort or has Perot been behind this all along?"

The Buchanan campaign is set to announce tomorrow that they have qualified for the ballot in Maryland, and did not have much in the way of comment about the potential Perot candidacy.

"We haven't heard anything about it," said Buchanan spokesman Brian Doherty. "We're just going to wait until Friday and see what happens. We haven't heard from Mr. Perot in a long time."