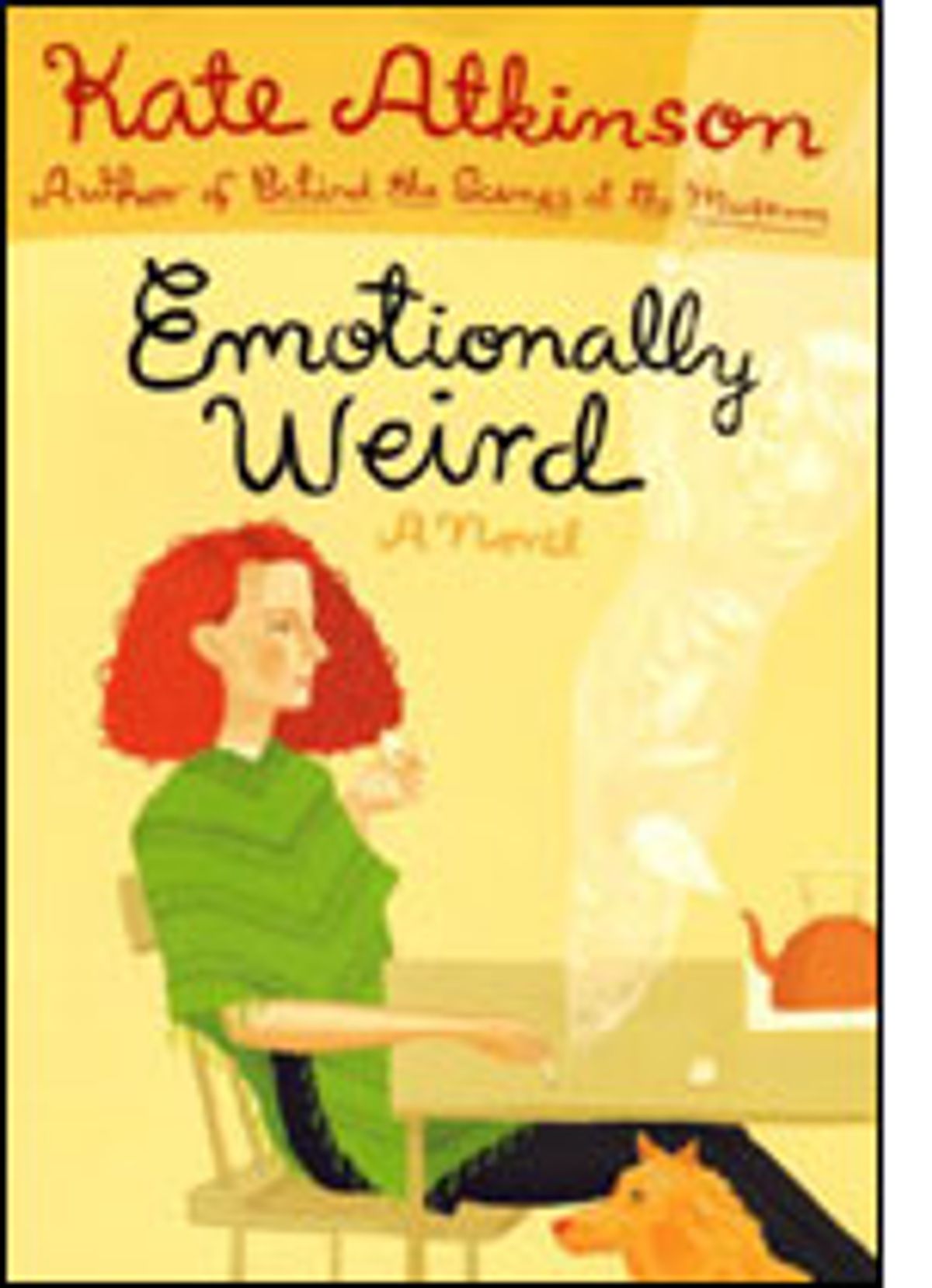 It takes a careful writer to create carefree comedy, to balance the absurd and the believable, the earnest and the inane, so that the loopiness that farce demands never seems merely random. Kate Atkinson -- whose debut, "Behind the Scenes at the Museum," won Britain's Whitbread Prize five years ago -- writes with energetic intelligence, but her sense of balance often goes awry. Her third novel, "Emotionally Weird," boasts a vivid atmosphere and some very funny business, but it's successful neither as screwball comedy nor as a serious novel about its heroine's quest for identity. There's almost certainly a delightful story buried here somewhere, but it may demand more indulgence than even the most optimistic reader is likely to give it.

In the novel's framing story, 21-year-old Effie is sharing a storm-swept house on a barren Scottish island with her mother, Nora. They endure their isolation by telling stories from their lives. Effie's understandably curious to know where she came from -- she knows no father and Nora claims to be a virgin. Nora's tale clears up the mystery, but not until the end of the book, and in the interim Effie does nearly all the talking.

It's 1972, and Effie has been idling her way through a university literature program in sleepy Dundee, Scotland. Her pothead boyfriend, Bob, is far more passionate about "Star Trek" than about her, and most of her classmates are as drifty and lackadaisical as she is. Effie, several fellow students and a few of the professors are working on predictably rotten creative writing projects, from which Atkinson quotes frequently in an annoying array of typefaces. The class lectures consist of comically impenetrable lit-theory jargon. Since she's not doing much schoolwork, Effie careens around Dundee in the company of testy commune dwellers, stoners, muddle-headed malcontents, the hilariously dotty English department head, a pair of crones on the lam from the old folks home and a seedy, mysterious private investigator who keeps turning up out of nowhere and shanghaiing her into assisting him on evidently pointless stakeouts.

Atkinson is best at crowded scenes full of giddy, Orton-esque confusion, and her descriptions can be startlingly lovely, as when the wind grabs a pile of manuscript pages: "I jumped up and chased around the room after them and managed to retrieve all but one, which floated serenely out of the window like a birdless wing." But so many characters surround Effie that even Nora interrupts her to complain, which brings up the novel's biggest problem: The postmodern devices Atkinson uses seem tacked on in an attempt to rouse our curiosity when Effie's story drags. Nora relates snippets of her past, and the information she gives is then incorporated into the story Effie's telling. At one point Effie describes the extravagant death of a professor, then immediately magic-realisms him back to life; a bit later, another character commits suicide and Nora objects, so Effie revises her narrative to save the girl.

Charitably, one could say that the novel's theme is the tricky nature of storytelling -- the intertwining of truth and fiction, untrustworthy memories and deliberate lies, mystery and obscurantism, in literature and in life. But if Effie is making up her story as she goes along, then it's hard to care about what happens to her; we're reading only for the jokes, and the amusement is just too repetitious and too often strained for this to work.

"Emotionally Weird" fairly howls for an editorial scalpel. When Bob utters Trekisms like "Beam me up, Scottie," and the hoary maxim "Just because you're paranoid doesn't mean they're not out to get you" is repeated half a dozen times; it may be an accurate representation of student humor circa 1972, but Atkinson expects us to still be amused. The plot is so full of digressions and red herrings that by the time it resolves itself, you're too weary to care what makes sense and what doesn't. The novel displays a mischievous imagination and suggests a real talent for composing on a large canvas. But it feels, in the end, both packed and empty, overthought and underwrought.