Now that your telenovela is over, perhaps your normal childhood can begin again. 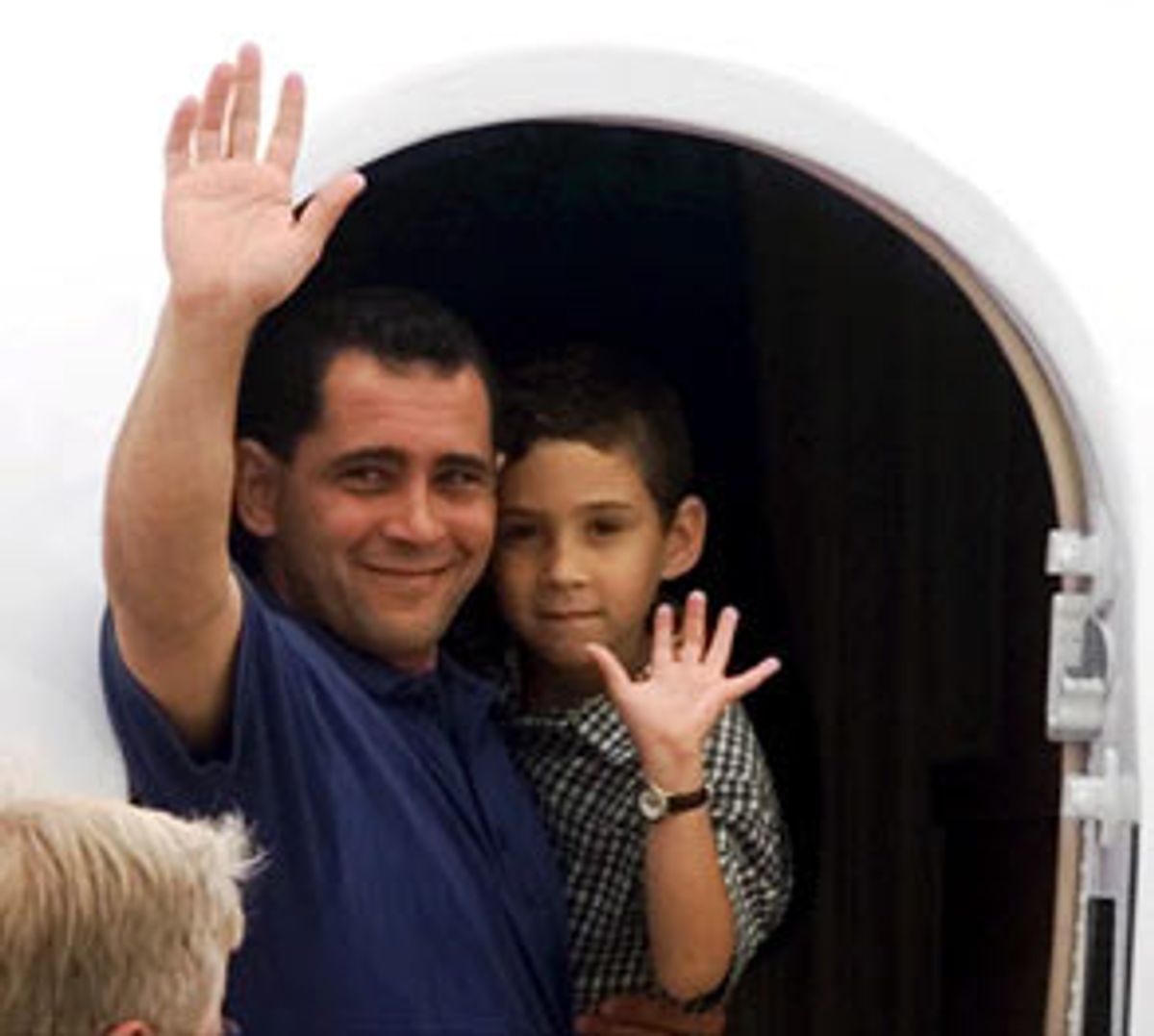 So it's farewell, Elian, we hardly knew ye. One of the weirdest sagas in recent history comes to an end as you fly off to Cuba with your father. In an era when "news" has the shelf life of fresh shrimp, you had an amazingly long ride in the media. You were paraded like a cute and playful panda in a cage for the TV cameras in Miami's Little Havana by your temporary "family" in your temporary home of five months. You were known all over the world by your first name. You stopped a lot of things -- traffic, as rallies ensued; the flow of important international and national news as the media went into full Elian alert, day and night.

You were also instrumental in stopping something major -- the benighted thinking that has kept the embargo against Cuba alive in Congress. The antics of the most rabid of Cuban-Americans in Miami, who screamed and sobbed and marched and picketed and vowed to the death to keep you from going back to Cuba, finally shined the spotlight on our political relationship with Cuba and the kind of people who defended it. And our policy was found wanting. Just as the polls overwhelmingly said you should be able to return to Cuba with your father, so did they show a growing majority of people who felt that an arcane Cold War economic policy was wrong. Now conservative Midwestern farmers and congressmen are adding their voices to the push for an end to the embargo. Now there is a beginning -- the lifting of the 38-year-long ban on food and medicine to Cuba will come to pass.

Early on, a faithful follower who had camped outside the Little Havana home ecstatically told a reporter that all of the attendant publicity "would show the world how bad Castro was." Instead, it was almost as if Castro had orchestrated this whole sad affair. The furor only introduced the rest of the world to an out of step band of extremists in Miami.

The jokes on Letterman and Leno -- indicators always of what is safe to ridicule in American politics -- were leveled at the Miami family and their exploitation of you. And then there was the satiric fable of the boy named Eliat Ginsburg, the creation of Internet jokesters that spread across the country like fire in a dry forest. Eliat was found floating at sea "after being set adrift from Israel on a giant matzoh ... Headlines read "Little boy plays outside without a sweater." And, "the boy's cousin, M'Shugena, became his primary caretaker, because she had no job, no kids, no husband and no skills. The situation took a toll on her; Neiman Marcus and Loehmann's called to see why she hadn't been in ... "

Now your Miami caretakers, with their own special problems, have moved from the tiny house in Little Havana and are seldom seen on television. As you leave the country, their 15 minutes of fame will end after one last round of publicity, of course.

How would these veterans of the television docudrama now passed fair in the country's latest television addiction? As Elian returns to Cuba, one wonders what would have happened to his Miami relatives had they been contestants on "Survivor."

Who would have been the first to be voted off the island? Marisleysis, your 21-year-old "surrogate mother" who found a revolving door to Miami's emergency rooms eight times for nervous problems after you came into her life and three times before that? Her father, your great uncle Lazaro, the unemployed car mechanic whose fondness for the bottle earned him two DUI convictions? The two cousins/felons who used to play with you who had long rap sheets? The two ex-cons who acted as lookouts next door when the raid went down? Perhaps the Wall Street Journal editorial board, which implied you were drugged by the American government and that "Congress should establish what drugs [you] may have been given while in U.S. government custody?" El Pescador, Donato Dalrymple, the bombastic buffoon who helped fish you from the sea, basked in the golden glow of television, all but moved into Lazaro's home and wound up fighting with your relatives lawyers?

He vowed to be your buddy for life, implying that this would mean visits to his world, perhaps meet the family. That would include his brother, who was convicted of manslaughter in the beating death of his own toddler son and served seven years of a 15-year term. And his sister, a convicted prostitute and drug addict who had five children by three different men and is doing time for selling drugs. Add to the mix Dalrymple's three failed marriages, which included two arrests for mutual moments of domestic violence with his second wife.

This is the stellar collection you would have been surrounded by, the very same people who fear for the brainwashing life you will know in Cuba with your father.

Today, the Miami family and protesters are acting in predictable fashion. A handful of people in front of the houses, faces contorted in ugly, shouting grimaces decry the Supreme Court decision to send you home. Your great uncle Lazaro, coming out of a church, shouts down a reporter and appears ready to punch him out until Marisleysis restrains Lazaro and leads him away. Meanwhile you are shown with your father shielding you from the cameras as you get into the plane. We see just a glimpse of you. No one is telling you to put your little hand up in a V for victory sign anymore. No one is telling you to smile for the cameras anymore. Your responses now belong to you alone.

A tearful but stoic supporter of the Miami side of the story vowed Tuesday night on television to keep up the vigil against Castro's Cuba, to make sure that there would be no more Elians.

Ironically, the majority of Cuban-Americans in Miami have opposed one way to ensure that there would be no more children to meet your fate, to remove a major reason why mothers risk their lives and the lives of their children to cross the 90 miles in makeshift rafts and unseaworthy boats. The compelling factor for fleeing Cuba has far more to do with hunger and economics than it does with political asylum. By acting to end the embargo, the Cuban-American leaders in Miami could have helped make conditions on the island palatable enough that such desperate voyages would be a thing of the past.

As for you, sweet Elian, you taught us all a lot about cheerful resilience. And made us think about international struggles as well as the very human drama of your young life. May you return to the business of being a little boy, instead of a political pawn, with all our blessings and hopes for your future.