Democrats allege that the investigator who interviewed Gore at home is playing partisan. 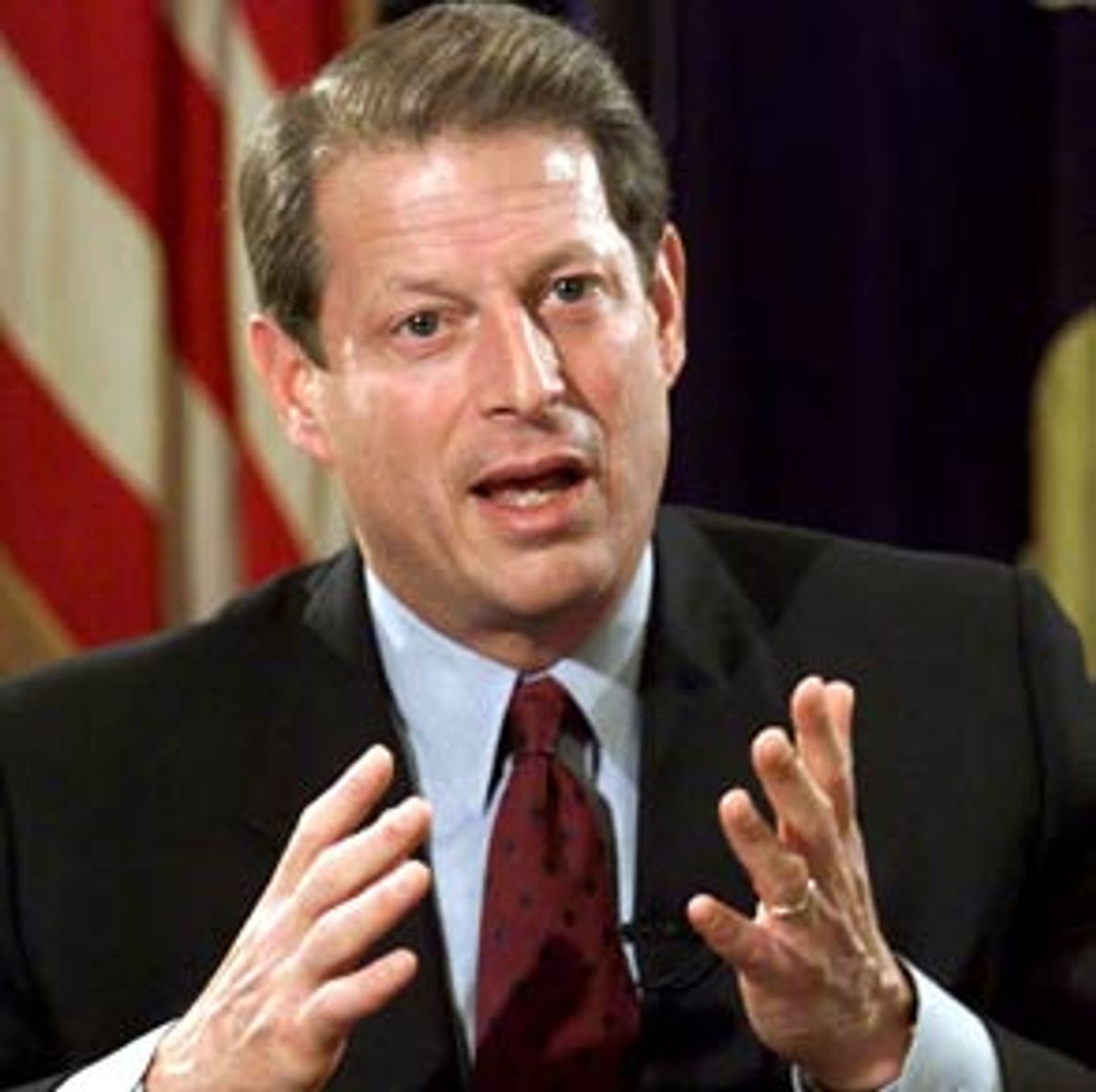 Details continue to emerge about a controversial April 18 meeting at the vice president's residence, when Al Gore sat and answered questions by Justice Department official Robert Conrad, chief of the campaign financing task force. And it's shaping up to be the most regrettable home visit since Ron Goldman brought Nicole Brown Simpson those glasses she left at Mezzaluna.

The latest salvo -- from Democrats familiar with the whole grim scene -- is that Conrad ignored a letter from Gore's office meant to clarify some of the vice president's comments during the interview, which focused on the White House's 1996 fundraising shenanigans. The Democrats allege Conrad refused to officially recognize the letter, possibly for partisan reasons.

Controversy over the meeting erupted last week, of course, after pit bull Sen. Arlen Specter, R-Penn., leaked the news -- later confirmed by Justice Department officials -- that Conrad had informed Attorney General Janet Reno he was going to recommend an independent counsel to investigate whether Gore had been truthful to him.

That drove Gore to immediately release the 123-page transcript of the meeting. "I think the truth is my friend in this," Gore told reporters on the back of Air Force Two. "I have full confidence in the judgment of the American people."

Gore allies snipe that Conrad is politically biased, pointing to a $250 contribution he made to the 1996 reelection of Sen. Jesse Helms, R-N.C., and the fact that Conrad once worked for a Helms senior staffer.

Such criticisms may be unfair, if not uncommon. "I don't like this kind of personal attack," says George Washington University law professor Jonathan Turley. "Conrad's recommendation is in line with other career professionals that reached the same conclusions, and it seems very doubtful that his political views influenced his position. His record was never raised as suspect ... until he took a position considered [against] the administration." Conrad is the third high-level person looking into the fundraising scandals to suggest an independent counsel. Charles G. LaBella, who had Conrad's job before quitting in 1998, and FBI director Louis Freeh are the others.

But what may be telling about Conrad's disposition on this case are his actions on April 20, two days after he questioned Gore.

On that day, Gore's attorney, James Neal, at the behest of the vice president, sent a letter to Conrad attempting to clarify one of his answers.

Conrad, according to Democrats close to the issue, refused to accept the letter for his investigation. That, they say, gives you an idea of where Conrad is coming from.

It's not that Conrad tore the letter to shreds -- or even stamped "Return to Sender" on the envelope. But, according to Democratic sources, he didn't acknowledge it as legitimate, and during internal Justice Department debates he reportedly argued against the validity of the letter.

A spokesman for the Justice Department declined to comment on the grounds that Reno's decision to appoint a counsel to investigate Gore is "a pending matter."

The specific issue Neal addressed in the letter was how many "White House coffees" Gore had attended.

When asked during the April 18 interview, Gore said, "I may have attended one."

According to Democrats familiar with the events of that day, however, not long after Conrad left the vice president's residence, Neal suggested that Conrad's use of the term "White House coffees" might have been broader than what Gore thought he'd meant.

When Conrad said "White House coffees," Neal told Gore, he may have meant coffees arranged as such but not actually having taken place at the White House.

These might have included coffees held at the Old Executive Office Building, for instance, or at the nearby Hay-Adams Hotel. Gore's attendance at such events was already well established, Democrats familiar with the events of that day say, so it's not as if Gore was trying to hide the fact that he'd hosted coffees at other addresses than 1600 Pennsylvania Ave. His appearances at the coffees were on his public record, and had been widely reported in the media.

"The Vice President advises me that he understood your questions about Coffees to concern the Coffees hosted by the President in the White House, and his answers were in response to such Coffees," Neal wrote. Neal added that when Conrad told Neal about the meeting, he hadn't mentioned the coffees as one of the potential subjects of the meeting "and, therefore, did not ask the Vice President to reflect upon these or review records in advance of his interview."

Regardless, Neal wrote, Gore had four White House coffees -- ones actually at the White House -- on his schedule.

In addition, Neal wrote, "the Vice President hosted approximately 21 coffees in the Old Executive Office Building. He did not understand your question to include OEOB coffees. The Vice President asked that you consider this a clarification of his testimony and make this part of the record."

"It is not uncommon for targets of any investigation to clarify earlier statements made under oath," says Turley. "And the correction is usually done by letter."

"Investigators are sometimes leery that lawyers are being used as a method of circumvention," Turley says. Indeed, lying to your lawyer is not a crime; lying to investigators is.

But, Turley says, "Conrad could have accepted the letter and immediately informed Vice President Gore that only a statement by the vice president would be deemed sufficient to correct the record."

According to Democrats close to the case, that did not happen. Democrats were eager to point out that none other than FBI director Louis Freeh -- who also recommended an independent counsel to look into the Hsi Lai Buddhist Temple event where $65,000 was illegally raised for the Democratic National Committee -- later qualified his testimony.

In 1997, Freeh was accused of giving false testimony during a congressional hearing about the FBI laboratory's mishandling of cases. On March 5, 1997, Freeh testified -- incorrectly -- that Frederic Whitehurst, an FBI crime lab whistleblower, had been suspended on the recommendation of Justice Department Inspector General Michael Bromwich.

One day later, Bromwich wrote Freeh that he had made "no such recommendation," and asked Freeh "to correct the testimony you gave during your appearance yesterday ... as promptly as possible." One week later, on March 11, Freeh wrote to Rep. Harold Rogers, R-Ky., that his testimony "was incomplete," and he corrected his prior statement.

Afterward, Freeh was the subject of a 30-day preliminary independent counsel inquiry in 1997, but Reno eventually decided against an investigation, concluding that while Freeh's testimony had been inaccurate, there was no evidence of criminal intent. Freeh's letter correcting himself no doubt helped to create that impression.

Indubitably, Al Gore is no Louis Freeh; Gore's answers on the White House fundraising dalliances of 1996 have been less than forthcoming, and it's hard to argue that at least some of this mess isn't of his own doing.

And since Conrad is unable to respond to questions about the reasons behind his call for an independent counsel, it's also possible Gore's clarification about the White House coffees was entirely immaterial.

From the testimony, it seems clear that Gore thinks Conrad is referring to the coffees hosted by the president and held at the White House itself. "They were on his side of the House," Gore says at one point. "I thought they were events that allowed the president to spend time with people who wanted to talk about policy" who would eventually donate cash to the DNC. Perhaps Conrad thinks Gore was less than honest about something else entirely.

For Gore allies, of course, that doesn't matter. Gore press secretary Chris Lehane said that Republicans were "turning the United States Congress into a scandal-industrial complex and George W. Bush is the CEO of that," and he accused Specter of "McCarthyite" tactics. Both statements reached their limited desired effects of embroiling Bush and Specter in unseemly scraps.

Of course, the Republicans are no better. Someone in the Justice Department leaked -- illegally -- news of Conrad's memo to Specter, and you can bet that whoever it is won't be pulling a lever for Gore this November. Specter's grandstanding and Bush's self-serving use of the leak for his own political gain are all part of the same nonsense.

It should be noted that there is ample evidence that Gore committed no crime at the Buddhist Temple, but was merely a rather boneheaded cog in the shameless money machines of the Democratic and Republican parties. These orgy-like excesses can also be seen in Bush's campaign, from its record-breaking "bundling," to its ridiculous claim to have no connection to the Wyly Brothers' mysterious primary-season ads, which prompted investigations by the Federal Election Commission and the Federal Communications Commission.

To the outside world, Lehane's comments about Washington being home to a "scandal-industrial complex" ring more than a little true, and no one seems entirely without a self-serving agenda.

That includes Specter, who, it might be remembered, is the former member of the Warren Commission who created the single-bullet theory of the Kennedy assassination. It includes Gore, whose love for the unfettered truth often seems on-again, off-again. And now, if it's true that he refused to accept the letter Gore sent to clarify his remarks, it quite possibly includes Conrad.