How U.S. stars sell Japan to the Japanese

In the Land of the Rising Sun, Schwarzenegger sells elixir, DiCaprio does car commercials, Harrison hawks brewskis, Willis sells coffee -- and they all want to keep it a secret. 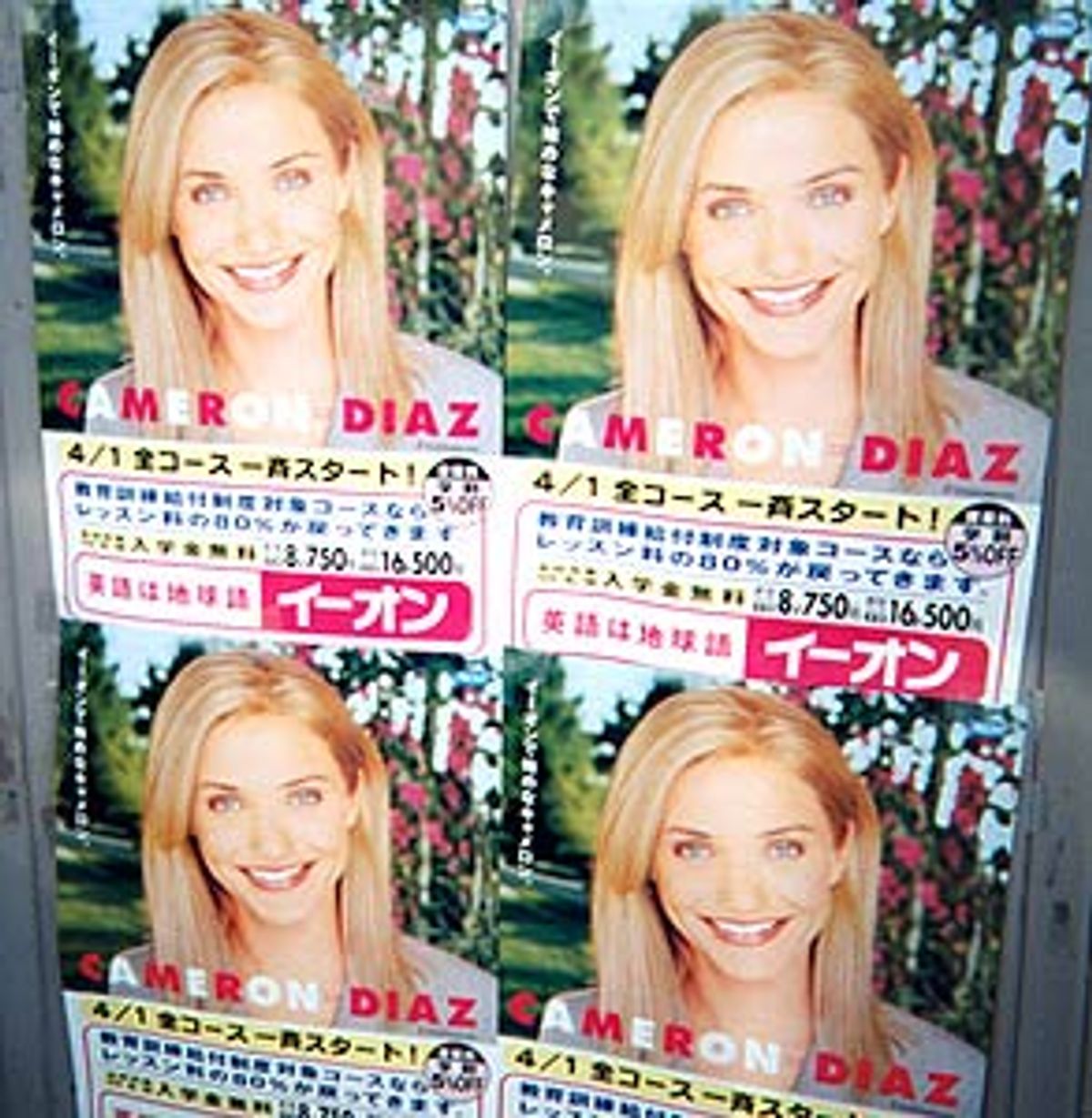 There's something about Cameron Diaz that she doesn't want you to know. In January, the raunchy and rambunctious movie star got a serious makeover when she landed a role as a demure, prissy, blue-eyed poster girl for Japan's Aeon school of English conversation.

Aeon is one of many chain English-conversation ("eikaiwa") schools that cater to working adults in Japan, where English-language instruction is a thriving industry. Eikaiwa schools here operate much like chain gyms do in the United States: Individuals pay set membership fees for the privilege of purchasing anything from bargain group-class packages to "voice time," unlimited hours of spontaneous English interaction with actual foreigners.

Diaz is not Aeon's first famous foreign mascot. In 1999, following the colossal success of "Titanic," an enhanced Celine Dion also appeared in ads for the conversation school. That year, the French Canadian singer grinned down at shoppers from a frighteningly large billboard above my city's hippest, busiest street, her Roman nose seeming to sniff in approval at the pervasive air of consumerism in the neighborhood. And why wouldn't it? Although Aeon is contractually bound to keep the cruder details of its endorsement deals under wraps, Dion's face can't come cheap.

Aeon is neither the only Japanese business to hire foreign celebrities as spokes-models nor the only one to alter a star's image to meet Japanese tastes. Sometimes, endorsements help raise a star's Japanese profile in time for a major motion picture release. (Just after the Asian release of "You've Got Mail," advertisements for Nohohon, a canned chrysanthemum and dandelion tea, showed Meg Ryan happily consuming the bitter, grassy brew; previews for "Any Given Sunday" began showing in cinemas as Diaz's Aeon poster was plastered across every available bit of wall space in town.)

Endorsements aren't always promotional, however. In one pork industry commercial, Sylvester Stallone stands with his arms full of gift-wrapped hams. "Osebo," he grunts at the camera in Japanese. Osebo are traditional "giri" (duty) gifts -- melons cradled in tissue paper or costly crates of canned fruit juice and beer -- presented to bosses, neighbors and extended family at the new year.

Arnold Schwarzenegger recently added to his income by appearing in several major Japanese ad campaigns, one for Sky TV (a paid movie channel) and the other for a tiny, amber bottle of syrupy liquid -- an alleged potency cocktail. In the latter, he raises both huge arms over his head and flashes two V's for victory.

Schwarzenegger, like a majority of the Western stars who opt to make guest appearances in Japanese ads, secured a secrecy clause for these endorsements, preventing the Japanese companies from disclosing his sponsorship of the concoction in the United States.

Although the Japanese public is aware that American movie stars expect their Japanese ad campaigns to be kept secret, most people don't understand why secrecy is called for. "Must the ads be kept a secret," a junior high school vice principal once asked me, "because Americans still feel something negative about Japan? Is it national 'ijime,' you know, 'bullying'?"

This notion may be due in part to the fact that there is no Japanese word for "sell out." In Japan, an actor, or "aidoru," has finally achieved celebrity status when he or she is big enough to appear in a television ad, famous enough to represent a brand-name product.

I tried explaining to my Japanese friends how, in America, celebrity and product endorsement tend to exist in inverse proportion to each other. Here, brand-name identifications make celebrities seem approachable. As in, hey, no way! Whoopi Goldberg likes chewing candy, too!

But Ian Kennedy, a North American who has been living and working in Tokyo for the past decade, refuses to safeguard this secret of so many stars. If celebrities are our gods, then Kennedy, creator of the Big Sell Out Web site, is riotously blasphemous.

After its 1997 launch, his site, which features regularly updated pictures of celebrities in less than flattering poses (check out a grizzly Harrison Ford with a glistening chest, slack-jawed in the sauna after guzzling a tall bottle of Kirin lager), was widely covered by Suck and other publications.

A director from Hakuhodo Inc., Japan's second-largest ad agency, told Associated Press writer Mari Yamaguchi that "Japan is far enough away that even if the ad is really bad, it goes largely unnoticed by the home-country fans."

And although Kennedy continues to feature the ads on his site, and despite the media coverage he attracts, American celebrities, such as Schwarzenegger, who wouldn't be caught dead shilling for, say, a potency potion in the U.S., continue to pose with Japanese products every month.

Following the enormous success in Japan of "The Sixth Sense," Bruce Willis was signed to promote Georgia-brand canned coffee -- he's seen grinning with self-satisfaction from coffee vending machines across the island nation. Willis may be happy for the same reason Dennis Hopper gave the Sunday Mirror after the U.K. newspaper queried him about one of his Japanese advertisements: "I couldn't believe what they were paying me," the actor said. "If I could do one every year, I could retire."

Japanese students are always asking me which of their beloved aidoru are most popular in the United States. It's a little embarrassing to admit that none of their mainstream "tarento" (talents) has found a tremendous fan base in America.

In the Japanese commercial universe, American celebrities typically endorse Japanese products, while unknown foreign models or Japanese stars are used to sell American or other imported products. Using foreign faces to peddle Japanese products lends a mystique to the local goods by suggesting more widespread popular appetites for things homegrown. This approach is hardly new. Images of Orson Welles and Alfred Hitchcock were both used to peddle brands of Japanese whiskey. And Audrey Hepburn's creamy complexion has sold millions of tubes of Japanese cosmetics.

So when the omnipotent Arnold "Suwasa-chan" appears on prime time and swears by Japan's major movie channel, Sky TV, he not only sells the service but gives the important, face-saving illusion that he cares deeply about the quality of Japanese television programming.

When Diaz smiles out from Aeon posters in a pose intimating that she has found part-time work as an eikaiwa instructor, she's suggesting that it's not an impossibility that she'd be inclined to spend some downtime in Japan between films.

And when Japan's adopted hero Leonardo DiCaprio takes the wheel of a Suzuki SUV and cruises, dimpled and impish, down a curvy, rural Japanese highway, he's implying that the new generation of Americans feels a special fondness for the Japanese auto industry.

The only thing more traditionally Japanese than tea is perhaps the chrysanthemum, symbol of the empire. When Ryan licks her upper lip on television and declares her taste for Nohohon, she's implying that the gaze works both ways. The Japanese viewer can imagine that, at that moment, someone in America is slouched on a sofa, sipping a fresh, iced can of Nohohon and watching a Japanese celebrity drink Coke. Just as her image is consumed by the Japanese public, when Ryan drinks Nohohon, she is consuming Japan. And that's fair trade.

Malena Watrous is a writer and teacher currently living in Japan.