"The Adventures of Rocky and Bullwinkle"

Robert De Niro's whip-fast Fearless Leader blurs the line between humans and cartoons, but the rest of this clunky TV remake is stiffer than an iron curtain. 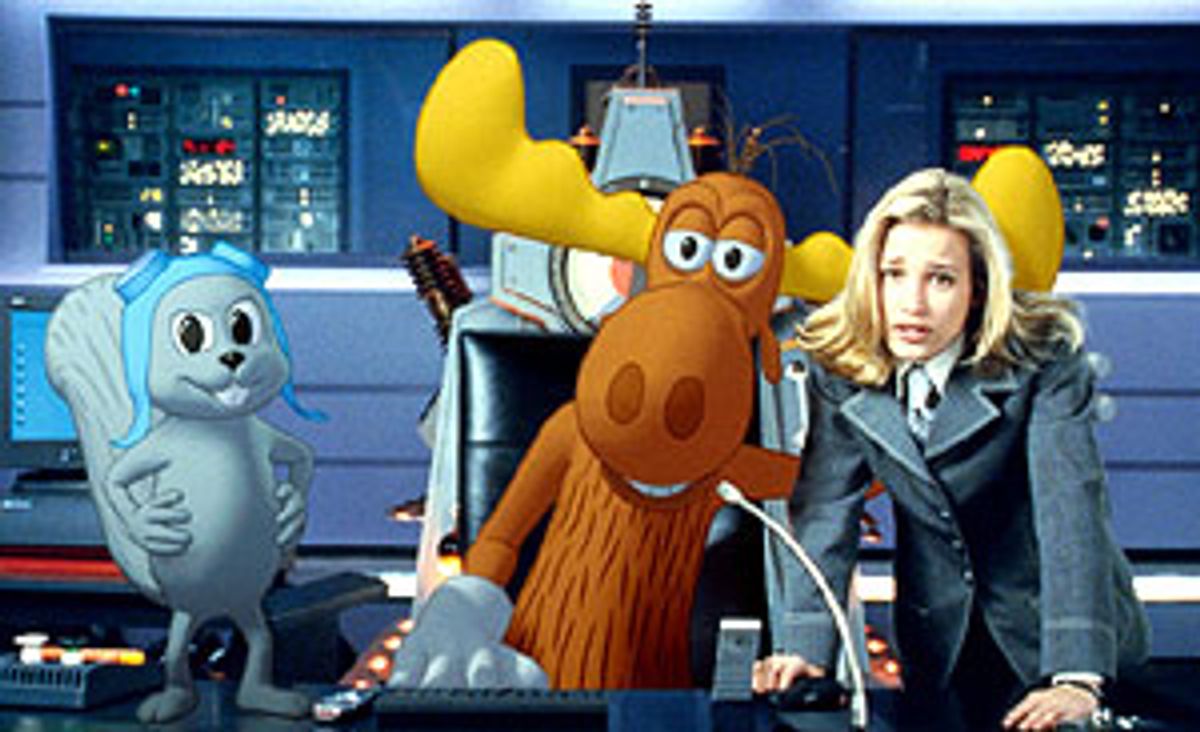 If you're a fan of the original animated series "The Adventures of Rocky and Bullwinkle," the first five minutes of the new feature-length film are just what you'd hoped they would be. In an animated prologue we learn that since Rocky and Bullwinkle were canceled in 1964, their hometown of Frostbite Falls, Minn., has fallen into rack and ruin. Our heroes are subsisting on ever-diminishing residuals. Things don't look much better across the sea, where the fall of the iron curtain has put the kibosh on the world-domination schemes of Fearless Leader and his agents, Boris and Natasha.

The animated sequence at the start of the film recaptures the look of the original TV episodes, a mishmash of lines and loops where everything looks like it was designed by a cockeyed architect. It's welcoming and familiar, but also sharply funny and fresh. You settle right into the tone of wiseacre humor as if the show were returning after a summer hiatus instead of after 36 years.

And then the movie starts.

Jay Ward's "Rocky and Bullwinkle" (which ran from 1961 to 1964) satirized Cold War paranoia, rah-rah patriotic spirit and the general idiocy of mass culture, all in the form of a Saturday afternoon serial -- one cliffhanger guaranteed per episode. Rocky was the true-hearted American hero, recast as a flying rodent with a high, scratchy voice. But the show's fans loved his moose sidekick, Bullwinkle, a galumphing boob with a voice that bounced as if a Ping-Pong ball was caught between his vocal cords and his epiglottis. The show congratulated its viewers on being smart enough to pick up the references strewn throughout (such as Bullwinkle emerging from the movies to boast, "Hey, Rock, I can imitate that guy. 'Stella! STEL-LA!!'"), but it was never smug. The heart of the humor lay in the tortured puns, the parodies of heroic exploits and the characters' breaking the action of the show to directly address the audience.

The trouble with the new film begins right with the conception: Fearless Leader finds a way to bring himself, Boris and Natasha into the three-dimensional world (where they are played, respectively, by Robert De Niro, Jason Alexander and Rene Russo) and commence plans for taking over the world. He plans to do it by broadcasting a cable station that will turn Americans into "mindless zombies incapable of independent thought," thus making them putty when he puts himself forward as a presidential candidate. The FBI summons Rocky and Bullwinkle into the world (where they are 3-D computer-generated models) to foil F.L.'s plans.

With a few exceptions -- "Who Framed Roger Rabbit" and the recent "Stuart Little" -- I've never seen a mix of live action and animation that didn't look clumsy and disassociated, as if the actors and the animated characters were communicating via shortwave radio in a hurricane. That's part of the problem here. Another is that the physics of cartoon humor simply don't translate to live action. Rocky and Bullwinkle seem a tad too cute in their computer incarnations. They're stranded in a real world, and so are the actors. When Boris' trademark hat flies off his head as Fearless Leader chews him out, or when Boris and Natasha sit suspended in midair before crashing to the ground, the jokes thud to earth with them.

A cartoon explosion has a lighter touch than a real explosion, and "Rocky and Bullwinkle" feels, for such a silly comedy, both heavy and slow. Humans can't react with the speed of cartoon characters, so the material loses the rat-a-tat-tat deadpan that set the tone of the TV series. (I guess there was no studio interest in making a full-length animated movie, though the five-minute prologue suggests there was both the will and the wit to make it a success.)

There's a handful of classic American comedy demented enough to classify as indigenous dada: the movies of W.C. Fields (particularly "Never Give a Sucker an Even Break"), the stand-up improv of Jonathan Winters, the routines of Bob and Ray and "The Adventures of Rocky and Bullwinkle." Each of them created a place where the squarest Americana was irredeemably looped, and all of them did it with explosive intelligence.

That's another way of saying that if a mainstream movie sets out to satirize contemporary consumer culture, it had better be damned smart. Kenneth Lonergan's script does pretty well with the puns, and he has come up with some good lines for Rocky (blessedly vocalized by the character's original voice, June Foray) and for Bullwinkle (vocalized by Keith Scott) that are right in character. The movie's main gag is that, not having been out of Frostbite Falls since their show was canceled, Rocky and Bullwinkle have no idea how the world has changed. As they keep passing through identical strip-mall towns, Bullwinkle keeps asking if they haven't passed this way already. The trouble is that the audience has been this way at dozens of other forgettable TV-to-big-screen translations.

"The Adventures of Rocky and Bullwinkle," which was directed by Des McAnuff ("Cousin Bette"), has a desperate-to-please cheeriness. Try laughing at jokes about consumer culture making the landscape anonymous when the movie features product placement for the likes of retro diner chain Johnny Rocket's and America Online. And try not to gag when the eager young FBI agent (Piper Perabo) sent to help Moose and Squirrel thanks them for helping her realize that a child's dreams can come true even when you're a grown-up. That's exactly the sort of candied sentimentality Ward sent up: In the cartoon series, Perabo would be a cluelessly cloying thing with blond ringlets and blank, batting eyes.

A number of people turn up in cameos -- among them Billy Crystal, Whoopi Goldberg, John Goodman, Carl Reiner and that perennially underused mad genius, Jonathan Winters. Winters has one great characteristically cracked moment as a wily desert rat selling Rocky and Bullwinkle an airplane. Accepting a wad of cash, he says, "That's gonna buy my stepson another child." But the others end up with nothing to do.

Alexander and Russo do a spiffy job mimicking the voices of Boris and Natasha, but they're both wrong for the parts. Alexander's specialty, complacent schlumpiness, doesn't capture Boris' sleazy cunning the way that Danny DeVito would. And though Russo delivers a few delicious seconds of Natasha's walk -- she's like a klutzy supermodel teetering down a runway in a skirt that allows her only baby steps -- she lacks the right ditzy hauteur. Imagine Anjelica Huston in the part and you've got perfection.

The bright spot is De Niro -- whose company, Tribeca Productions, produced the movie -- as Fearless Leader. With the scar, monocle and prosthetic hook nose, his hair an oily patch of patent leather that stops several inches short of his ears, De Niro uses a stylized physical stiffness and whip-fast delivery to blur the line between human and cartoon. It's a turn, but one that showcases an actor's smarts and skill. His performance suggests the direction the movie might have taken.

The sharpest comment I heard on "The Adventures of Rocky and Bullwinkle" came in the men's room afterward. "It's like spending a million dollars on a gumball," one guy said. Yup -- and not even having the fun of watching it spiral down the chute before you pop it into your gob. There's no sweetness, no crunch.