Any given Monday night

Dennis Miller won't pull the NFL out of its TV doldrums. Here are seven ideas that will. 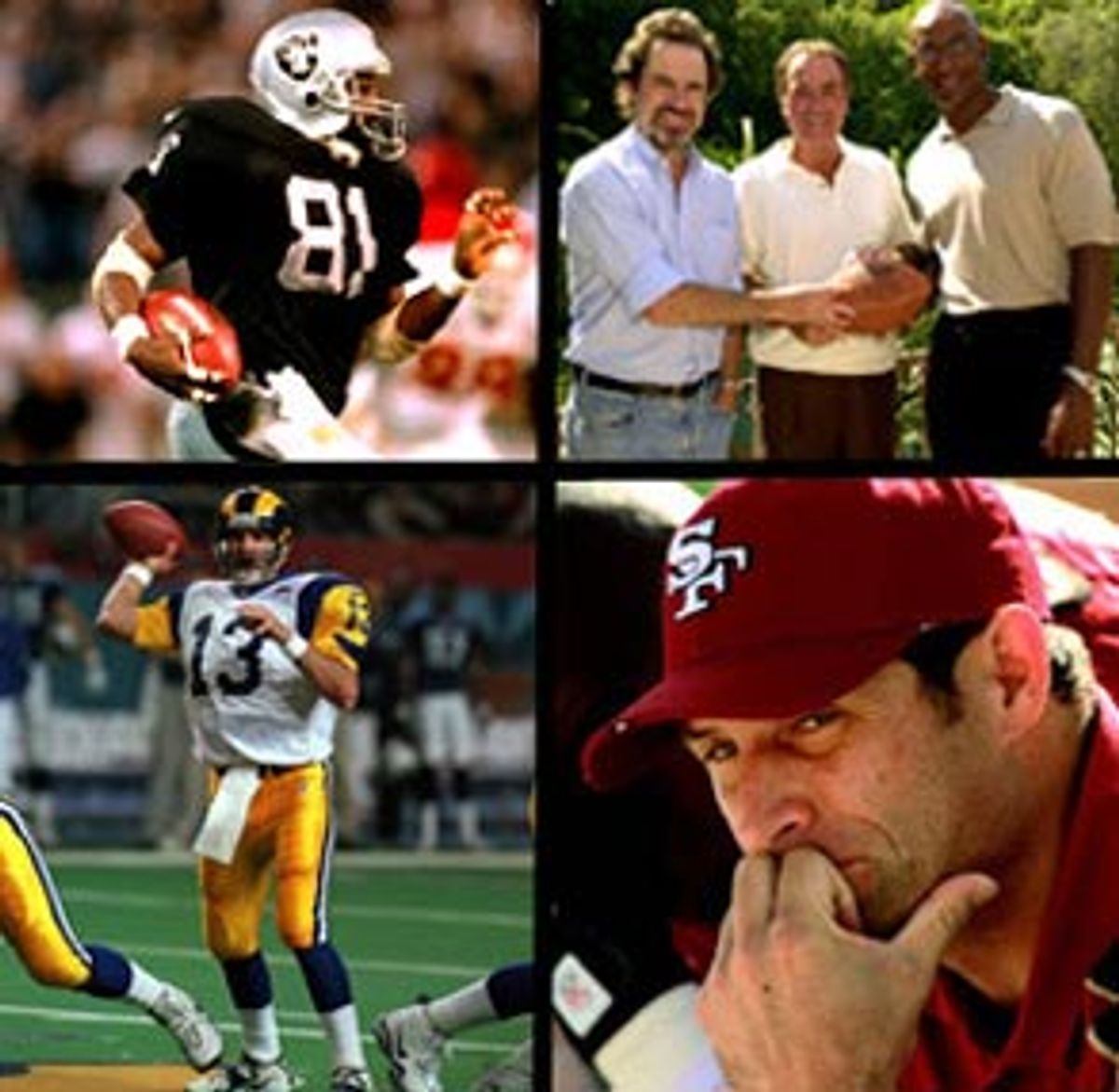 Dennis Miller? Why didn't ABC have the guts to go all the way and hire Chris Rock? At least we'd be laughing instead of listening to someone laugh at himself. Miller's hiring will at least satisfy those who think the primary problem with pro football is lack of sarcasm.

For most of the rest of us, though, getting through the football season is going to be a problem. It's no secret that NFL TV ratings and live attendance have been slipping for years, a fact that last season's upsurge momentarily obscured. In 1999 the combination of salary cap restrictions and free agency defections finally shook up the league to a point where, for the first time in perhaps two decades, most fans tuned into big games without feeling they already knew who was going to win.

Whether or not the novelty of watching former cellar-dwellers claw to the top will hold everyone's imagination for a second straight season pretty much remains an open question. Certainly the NFL has no immediate heir to Steve Young, Jerry Rice, John Elway and Barry Sanders in terms of ability or style.

There seems to be a deeper problem with NFL football, though: It's gotten boring, which is to say, predictable. The reason is simple: coaches. In recent years head coaches have come to dominate every phase of the game, from calling the plays to acquiring the talent. A modern pro football team is a reflection of a football coach's personality, and that personality is invariably crabby, obsessive, egomaniacal and conservative to the point of turning control into a religion. Coaches don't even coach football anymore -- they coach coaches. It's strategy-by-committee. No wonder the players increasingly seem like automatons.

Here's my prescription for reviving pro football, and I wouldn't mind hearing from readers to see how many of you agree with me.

1. No more play-calling from the sideline. Do we want a return to exciting "Riverboat Gambler" style quarterbacks like Johnny Unitas, Bart Starr and Joe Namath, or a continuation of the pre-programmed snap takers like we've got now? You're not going to get great quarterbacks again until you allow the guys who bend down over center to call their own plays; football sense can't develop while the thinking is done by someone who isn't facing up to a blitz. Turn back the clock at least 20 years in this respect and watch how creative play-calling becomes.

2. Shrink team rosters, or at least have a handful of substitutes designated only for emergency situations. When rosters expanded, one-dimensional players became part of the game. An exciting, versatile player like Paul Hornung couldn't make it in today's game because there's someone on the bench who can perform each one of his skills -- running, blocking, receiving, passing, kicking -- better than he can. Hornung was a football player; his modern counterparts are role players.

3. Let's put some spice back in an increasingly boring play by reviving a Paul Hornung special: the old "drop kick" field goal. And let's award four points for it.

4. Let's bring back the most exciting play in football: the kickoff return. Coaches hate the kickoff return; you can't coach against it. It puts too much reliance on individual talent. But you can clamp down on it by having players on your roster whose primary duty is "special" teams, and you can all but eliminate the long return by getting a specialist kicker who can boot the ball out of the end zone. If football were designed for fans, this would be outlawed. Think about it: The point ought to be to keep the ball in play. Why penalize a kicker five yards for kicking out of bounds but not for kicking it out of the end zone? If, on the other hand, the kicker had to keep the ball on the field, each kickoff could be a potential big play instead of a once-a-year fluke.

5. Let's do away with the unimaginative coach's best friend: the overtime period. A coach without imagination or guts can deliberately play for a tie and then shrug his shoulders and say, "Well, hey, what can you do about an overtime loss?" For the most part, what you can do is not reach overtime in the first place. (In any event, it's ridiculous to have both a two-point conversion and an overtime.) The overtime period doesn't create suspense, it drains suspense out of the last six or seven minutes of regular time as coaches vie with each other to see who can avoid taking the risk. If we really want to make the fourth quarter exciting, let's borrow this rule from college football: Allow the clock to stop, briefly, after a first down. This would reward teams for trying to move the ball, and allow them more time to get off subsequent plays.

6 & 7. Here's two more ideas that would have to be approved by a group even more conservative than coaches. Namely, the NFL owners. The balance between passing and running will never be restored until all artificial turf is removed. (Banning it for health reasons is a good idea in any event.) Remember those great, intricate running plays like the Green Bay Sweep or the draw play? You can't really have them on artificial turf, which emphasizes speed and negates the importance of complex line play. Either get rid of artificial turf or create artificial mud.

And, last, liberate the couch-dwelling NFL fan. Over the last couple of seasons most fans around the country have been unable to watch the most significant regular-season games outside their own area because of irritating rules regarding blackouts, and as area fans can tell you, there's always a game somewhere more interesting than the Giants vs. Phoenix. Incredible as it may seem, the Neanderthals who run Major League Baseball are years ahead of the NFL on this count: When the local team is playing a dud, you can usually tune in the Braves, Cubs or somebody decent on ESPN.

For everyone who was outraged by my suggestion that Tiger Woods is not the world's most dominant athlete, I promise to reconsider my position when Tiger is lining up to win his seventh Masters in eight seasons, the tennis equivalent of which Pete Sampras is doing this week at Wimbledon. Also, when Woods wins seven times in eight years against competition as formidable as Michael Chang, Andre Agassi and Jim Courier.