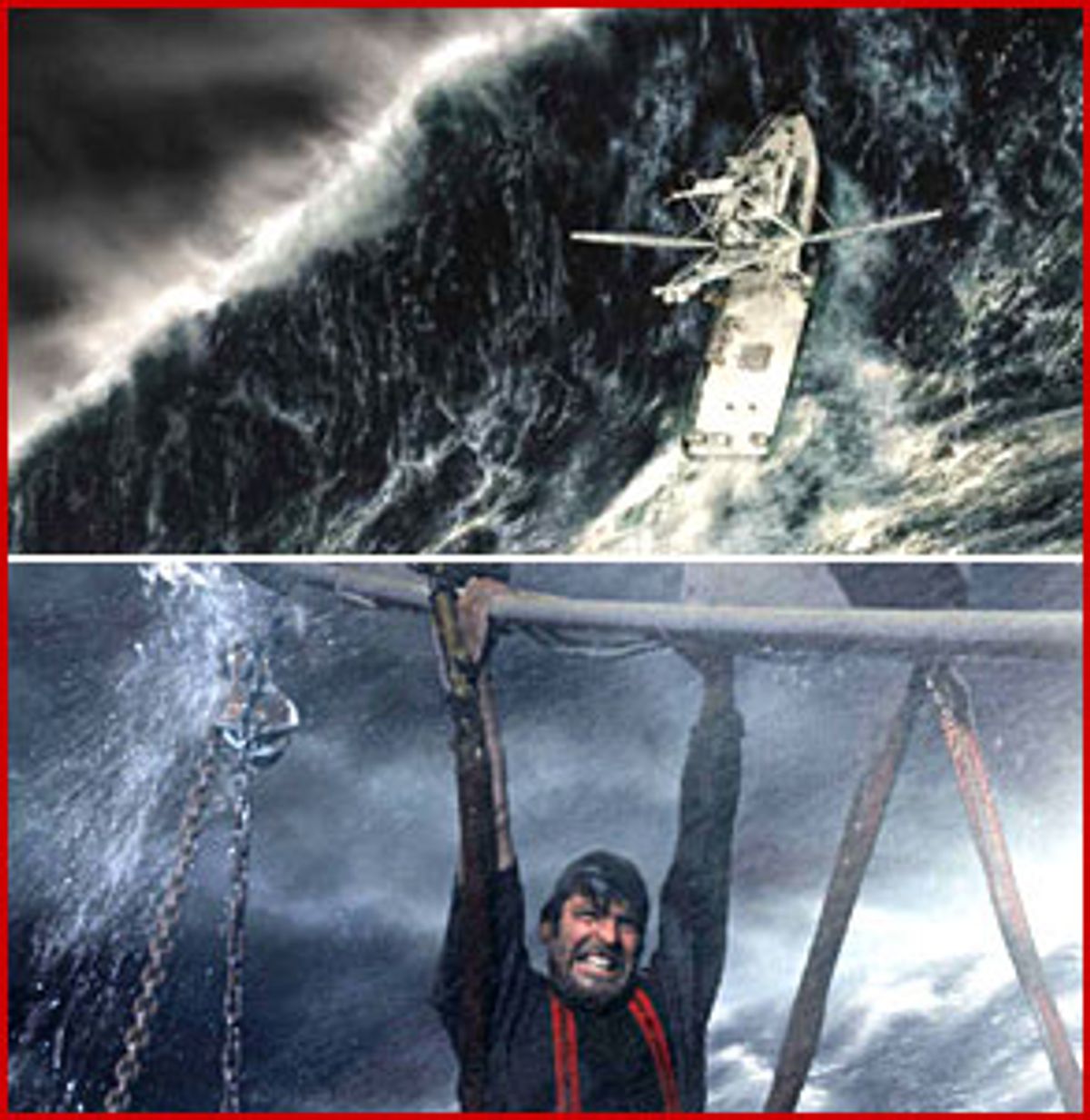 There are so many specific, niggling things wrong with "The Perfect Storm" that I hardly know where to begin. Director Wolfgang Petersen takes the true story of six Gloucester, Mass., swordfishermen lost in a monstrous 1991 storm and pads it with melodrama like so much whale blubber. In adapting Sebastian Junger's marvelous and unfailingly conscientious 1997 nonfiction bestseller of the same name, he's failed to listen for the quieter drama inherent in the story. James Horner's typically heavy-handed score doesn't help, cueing us what to feel with each swelling wave -- it's got muscles for brains. And fans of Junger's book (I count myself among them) have good reason to be troubled by some of the liberties Petersen takes with the narrative.

But "The Perfect Storm" shook me, and the feeling lingered. There were plenty of times I couldn't fool myself into thinking of the picture as much more than your stock Hollywood action movie or disaster tale. Its spectacular special effects threaten to swallow characters whole, and there are times when overwrought and clumsy dialogue (from a script written by William D. Wittliff) nearly pitch you right out of the movie's mood.

But there's an air of desolation that hovers around the edges of "The Perfect Storm," almost as if there's a ghost of another possible movie -- a better, subtler one -- settling around it in a mournful mist. In an early scene Mark Wahlberg, as fisherman Bobby Shatford, wakes up with his girlfriend, Chris (Diane Lane), on the day he's set to leave on the sword boat Andrea Gail. In a half-whispered line that's both completely in the moment and yet already half out to sea, he tells her how much he loves sleeping curled into her, how he'd wished that morning would never come.

As Wahlberg delivers it, the line is all tenderness and no portent, a perfect example of how beautifully articulate human beings can be as they simply go about their daily lives, and its very ordinariness makes it devastating. Of all the kinds of grieving people do in their lives, mourning one small lost pleasure shouldn't amount to much -- but for Bobby, it amounts to everything.

Wahlberg's performance here proves he's one of the finest young actors the movies have to offer, and he's one of the central forces that manage to keep "The Perfect Storm" on some recognizably human scale. Bobby is a well-meaning average guy who needs desperately to make money, both to keep up child-support payments to his ex-wife and to start a new life with Chris. To that end, he works as a commercial fisherman; it's a potentially lucrative but extremely dangerous profession. He's happy to have a slot on the Andrea Gail, captained by Billy Tyne (George Clooney), an ace fisherman who's been bringing in smaller hauls than usual and is anxious to turn his luck around.

The rest of the crew includes Murph (John C. Reilly), who's torn up about his recent separation from his wife and young son; "Sully" (William Fichtner), a taciturn and tattooed troublemaker who's nonetheless driven by basic human decency; Alfred Pierre (Allen Payne), good-natured and well-liked, and the crew's only black member (and, whether it's significant or not, the only one of the six who's barely defined as a character); and Bugsy (John Hawkes), the scraggly-looking but sweet one who can never get a date.

The six men head further and further out to sea in search of more successful hauls (swordfishermen are often out for a month at a stretch), and when it's time for them to turn back, they discover they're headed into a colossal storm, a collision of three fronts unlike anything seen in this century. Anxious to make it home, they press on, their vessel inching forward in waves that continually threaten to envelop it, and winds that break off essential parts of the boat as if it were a cheap bathtub toy.

Intercut with the story of the men on the Andrea Gail are several subplots, one involving Coast Guard rescuers, the other following the traumatic experiences of the crew of a small private boat (two of whom are played by the fine actresses Cherry Jones and Karen Allen, who unfortunately have little to do). But it's the story of the men on the Andrea Gail that's most engaging, and ultimately most wrenching. Clooney has some of the movie's hokiest lines (including some load of baloney about how swell it is to be a swordfish boat captain that would surely get any real Gloucester fisherman laughed out of town), but he turns them around with his trademark nonchalance and effortless grace.

Reilly is heartbreaking: The movie, unlike the book, downplays the fishermen's love of alcohol, but without ever spelling it out, Reilly seems to carry enough washed-out sadness in his eyes for all of them. And Hawkes has a few lovely early scenes, in which he unsuccessfully tries to pick up a hefty but saucy woman (played with the perfect mix of dry wit and depth by Rusty Schwimmer) at the local bar the night before the boat sails. His awkward joyousness when she shows up at the docks the next morning to see him off caps the vignette nicely.

The special effects of "The Perfect Storm" have been its main selling point, and the picture's mountainous, glistening charcoal-colored swells certainly are magnificent at times. And yet the effects are perhaps the great failing of the movie. The moment that makes the picture feel most like an amusement-park ride -- the sequence, shown in the movie's trailer, when the "tiny" 72-foot Andrea Gail tries to negotiate a wave as big as a skyscraper -- is pivotal in the way it leads up to the end of the movie. The effect is calculated to make us say, "Wow!" (much as the effects in "Titanic" did), to distract us from any possible emotional resonance even as it gives us chills. That's a troubling seesaw that the movie rides uneasily.

Warner Bros. has asked critics not to reveal the ending of "The Perfect Storm," but it's impossible to talk about the movie intelligently, or, more important, to get to the wobbly, throbbing heart of it, without revealing what happens. What's more, the movie is based on a hugely successful book that's been openly acknowledged as an account of a real-life tragedy. If we're truly a media-saturated society, we can't be expected to revert to a nation of cave dwellers when it's time for a movie studio to sell its product.

That said, if you'd rather not know what happens at the end of "The Perfect Storm," stop reading here.

The Gloucester fishermen on the Andrea Gail all die. While any filmmaker would have to take liberties in imagining the last moments of men dying at sea, there's something a little queasy about the way Petersen fills in so much detail, in ways Junger was careful not to. In real life, the families of the men upon whom these characters were based continue to mourn them. When "The Perfect Storm" feels more like an entertainment than a tragedy, it does a grave disservice to their memory.

But even for all the ways it's indefensible, "The Perfect Storm" -- thanks perhaps mostly to those key early scenes, where we're made to see each of the men as individuals -- does manage to scratch its way to some core of true feeling. We're privy to the crew's moments of bliss (happily cranking up ZZ Top's "Tush" on a boombox as they set to work on the boat) as well as their fear. They become real enough to us so that we miss them when they're gone. And like Junger's book, it assesses the effect that a horrific storm can have on a community not just in terms of onshore property damage and lives lost. How many times have we heard a TV weatherman say with relief, after a major storm has wreaked its damage on land, something like, "The storm is now headed out to sea"?

And as summer blockbusters go, "The Perfect Storm" is highly unorthodox in the way it draws a pall of despair around it like a nighttime blanket. Perhaps the key to that despair rests with Lane's performance. Lane attempts a Boston accent, and unlike Wahlberg's (which is natural; he was raised in Boston), it doesn't work.

But that one misstep in judgment, enough to sabotage a lesser performance, hardly matters here. Lane pours so much tough-girl longing into her character. Her reluctance to let Bobby go, the fact that she hauls off and gives him a shiner his last night at home and, most of all, the unrelieved sadness she feels when he's thousands of miles away with nothing too significant around him but sea and sky and her picture in his bunk -- as she plays them, they're all deeply personal and archetypal at once, underscoring everything that's elemental, and compelling, about stories of men going off to sea.

"There are houses in Gloucester," Junger wrote, "where grooves have been worn into the floorboards by women pacing past an upstairs window, looking out to sea." Lane's Chris is the modern version, suggesting that it's not just the spirits of the dead men that haunt this particular story, but also the sorrow of every girl who's never gotten the chance to say goodbye.