The Nazis, er, the Redcoats are coming!

The savage soldiers in "The Patriot" act more like the Waffen SS than actual British troops. Does this movie have an ulterior motive? 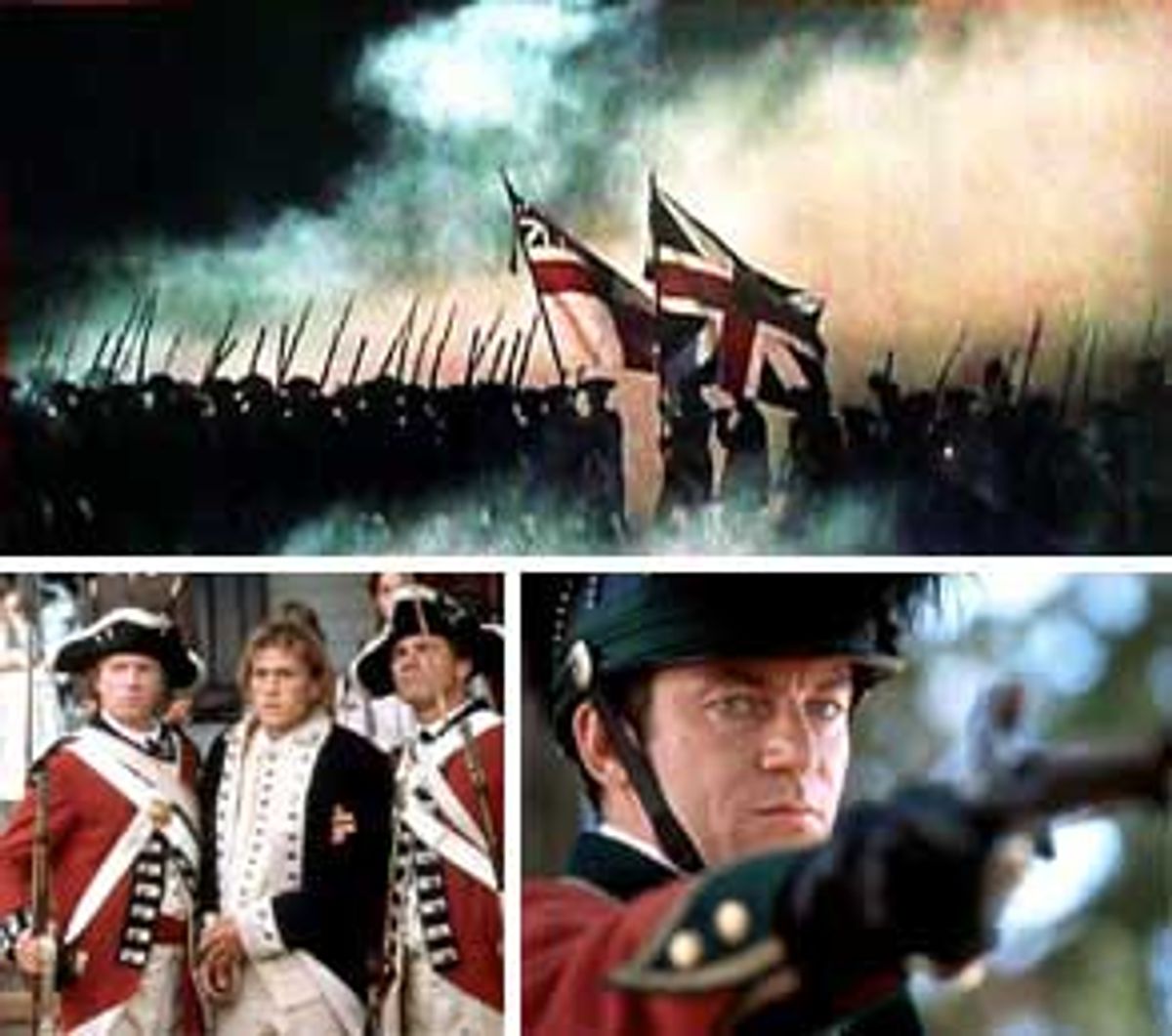 The week before "The Patriot" opened in the United States, the British press lit up with furious headlines. "Truth is first casualty in Hollywood's War," read one in the Daily Telegraph. Another story, about the historical model for Mel Gibson's character was titled, "The Secret Shame of Mel's New Hero." The accompanying articles complained that the new Revolutionary War epic portrays British redcoats as "bloodthirsty and unprincipled stormtroopers" and "bloodthirsty child-killers."

The prizewinning historian and biographer Andrew Roberts called the film "racist" in the Daily Express, and pointed out that it was only the latest in a series of films like "Titanic," "Michael Collins" and "The Jungle Book" remake that have depicted the British as "treacherous, cowardly, evil [and] sadistic." Roberts had a theory: "With their own record of killing 12 million American Indians and supporting slavery for four decades after the British abolished it, Americans wish to project their historical guilt onto someone else."

I can only imagine how much angrier Fleet Street's pundits will be after they have actually seen the movie. "The Patriot" will not open in England until August, but when it does, Brits will see a supposedly authentic historical epic that radically rewrites the known history of the Revolutionary War. It does so by casting George III's redcoats as cartoonish paragons of evil who commit one monstrous -- but wholly invented -- atrocity after another. In one scene, the most harrowing of the film, redcoats round up a village of screaming women and children and old men, lock them in a church and set the whole chapel on fire. If you didn't know anything about the Revolution, you might actually believe the British army in North America was made up of astonishingly cruel, even demonic, sadists who really did do this kind of thing -- as if they were the 18th century equivalent of the Nazi SS. Yet no action of the sort ever happened during the war for independence, but an eerily identical war crime -- one of the most notorious atrocities of World War II -- was carried out by the Nazis in France in 1944.

As a film critic for the New York Post, I found "The Patriot" well made and often exciting. But I also found it disturbing in a way that many weaker, dumber films are not. It's not just that it willfully distorts history in a manner that goes way beyond the traditional poetic license employed by Hollywood, it's the strange, primitive politics that seem to underlie that distortion.

"The Patriot" is a movie that doesn't "get" patriotism -- in either a modern or the 18th century sense of the word. The only memorable, explicit political sentiment voiced comes when Gibson's character makes the rather Tory comment that he sees no advantage in replacing the tyranny of one man 3,000 miles away for the tyranny of 3,000 men, one mile away. The deliberate lacuna demonstrates a total lack of understanding of, or even a kind of hostility to, the patriotic politics that motivated the founding fathers.

You could actually argue without too much exaggeration that "The Patriot" is as fascist a film (and I use the term in its literal sense, not as a synonym for "bad") as anything made in decades. It's even more fascist than "Fight Club," that ode to violence, barely repressed homoeroticism and the rejection of consumer capitalism.

"The Patriot" presents a deeply sentimental cult of the family, casts unusually Aryan-looking heroes and avoids any democratic or political context in its portrayal of the Revolutionary War. Instead of such context, it offers a story in which the desire for blood vengeance -- for a son shot by a British officer -- turns Gibson's character into a "patriot." Meanwhile, the imagery piles up:

But the most disturbing thing about "The Patriot" is not just that German director Roland Emmerich (director of the jingoistic "Independence Day") and his screenwriter Robert Rodat (who was criticized for excluding British and other Allied soldiers from his script for "Saving Private Ryan") depict British troops as committing savage atrocities, but that those atrocities bear such a close resemblance to war crimes carried out by German troops -- particularly the SS in World War II. It's hard not to wonder if the filmmakers have some kind of subconscious agenda.

In one scene in "The Patriot," the British regulars murder wounded American POWs. In another, they order the execution of an American soldier captured in uniform. Both were common occurrences on the Eastern Front of World War II, but such war crimes by regular troops "never happened" in the Revolutionary War, says American Heritage magazine editor Richard Snow. (Of course, irregular militias, terrorist bands allied to both sides and Indian proxies did do some very nasty things.) And, sure, spies and traitors, such as Nathan Hale (American) and Major John Andre (British), were hanged. But regular troops on both sides observed the law of war that distinctions should be made between the former categories and uniformed combatants. "['The Patriot'] is inventing a context of atrocities when what really happened was much more interesting," he says.

Snow says he understands the outrage in the British press. "I think that [they] should be upset. I would be pretty sore if I saw a British production of Shaw's 'Devil's Disciple' and it had Americans bayonetting the wounded after the Battle of Bennington."

The most outrageous of "The Patriot's" many faults is the way Emmerich and Rodat show the British troops committing a war crime that closely resembles one of the most notorious Nazi war crimes of World War II -- the massacre of 642 people (including 205 children) in the French village of Oradour sur Glane on June 10, 1944. The film mimics the horrible event with clear accuracy and turns it into just another atrocity committed by redcoats in 1780.

At Oradour, the Waffen SS "Das Reich" division punished local resistance activity by first shooting all the men and boys. Then they rounded up the women and children, locked them in the town church and set it afire. (You can see Oradour today exactly as it was just after the Nazis carried out the ghastly mass-murder -- the French have left it to remain an empty memorial.)

There was one major case of British regulars burning a town during the Revolution. It was Groton, Conn., and the troops were under the command of Benedict Arnold. But the houses they burned were empty. Yet in "The Patriot" fictional British dragoons do exactly the same as the real life SS did at Oradour. They lock scores of civilians, most of them women and children, into a church and set it afire. According to both historian Thomas Fleming and Snow, no such incident took place during the Revolution. As Snow says, "Of course it never happened -- if it had do you think Americans would have forgotten it? It could have kept us out of World War I."

By transposing Oradour to South Carolina, and making 18th century Britons the first moderns to commit this particular war crime, Emmerich and Rodat -- unwittingly or not -- have done something unpleasantly akin to Holocaust revisionism. They have made a film that will have the effect of inoculating audiences against the unique historical horror of Oradour -- and implicitly rehabilitating the Nazis while making the British seem as evil as history's worst monsters.

Of course, Emmerich and Rodat would probably counter that they're just trying to show how nasty war can be. But the fact remains that in the real Revolutionary War the regular armies of neither side behaved in this way -- even in South Carolina in 1780 -- and only the Brits are shown committing unprovoked acts of bestial cruelty.

So it's no wonder that the British press sees this film as a kind of blood libel against the British people. To understand the import, just imagine a hugely successful foreign film (French, British, Chinese) about the Vietnam War that depicted Americans using thousands of Vietnamese children for medical and scientific experiments.

If the Nazis had won the war in Europe, and their propaganda ministry had decided to make a film about the American Revolution, "The Patriot" is exactly the movie you could expect to see -- minus the computer-generated effects, of course. (Doubters should take a look at Goebbels' pre-Pearl Harbor efforts at inflaming isolationist Anglophobia.)

It's just as well for Sony-Columbia that Emmerich, Rodat and Gibson didn't make a film that painted the French, the Chinese or even the Arabs into ur-SS war criminals. If they had there would probably be official government protests, popular demonstrations and boycotts. But they have still told a big lie about the war that brought the United States into existence, one that feeds an even greater lie about the war and the enemy the U.S. and Britain fought half a century ago. It's a shameful way to make money.

And it's particularly insidious when a film that goes to such lengths to avoid anachronism in Revolutionary period clothing, weaponry and battle tactics takes such license with the nature of the war. In the past, Hollywood has played with historical details in order to make a narrative more compelling or the look of a film more appealing. But it has been an unwritten rule of the American film industry that you try to hew vaguely to the generally accepted account of how things were in the past.

It's hard to define, but there is clearly a point where dramatic and poetic license shade into something much more sinister. If you made a film in which the slave trade was shown as two-sided with Africans shown as raiding Europe for slaves to bring to America, or one in which Jews were shown provoking pogroms by drinking the blood of gentile children, you would have passed that point, even if such films were exciting, well acted and starred Gibson.

I don't blame Gibson so much; he's only an actor and it's no surprise when actors either willfully or ignorantly overlook historical accuracy for a good role. (Especially when they receive $25 million for their trouble, as Gibson did for "The Patriot.") But I'd like to introduce Emmerich and Rodat to the families of those massacred at Oradour.

Jonathan Foreman is a staff writer for the New York Post.