The bluest performance artist around has the paint-and-nipple market cornered. 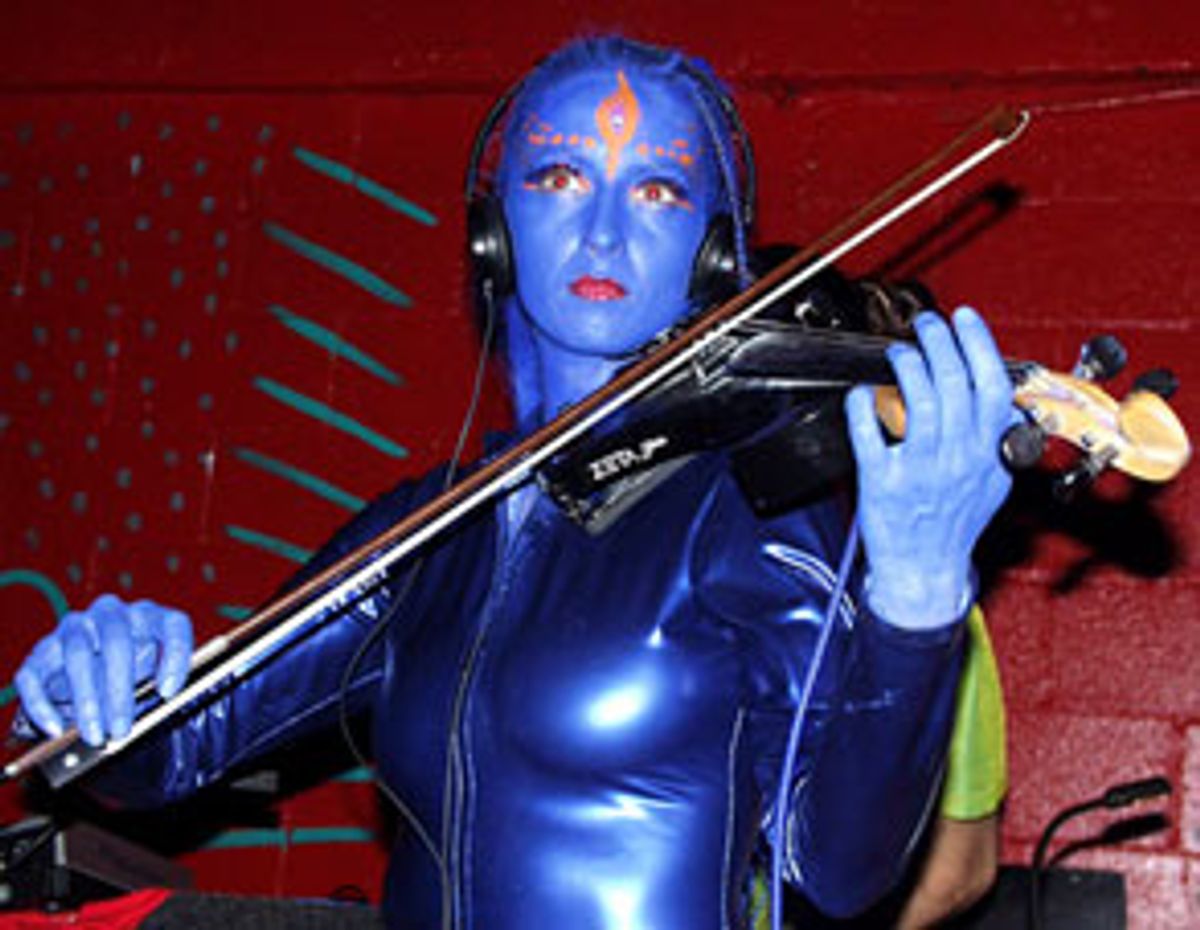 The turquoise-tinged performance-art siren known as Blue Girl traipses through the gaping hole of an immense, white modernistic vagina that looks like it was designed by the ghost of Frank Lloyd Wright. Sporting a floor-length blue cape, blue thigh-high boots and a long, blue ponytail, she reminds you of some alien, B-movie Nefertiti who keeps her slaves in line by means of her booty or the back of her hand. Save for what's covered by a pair of blue-vinyl hot pants, the rest of her glorious sapphire-colored flesh is exposed for all to see -- including a sublime pair of breasts that'd be the envy of any "perfect 10" model.

Without a word to the spacy audience of rave-types gathered at the Dream Theater, a funky little venue in the Los Feliz section of L.A., Blue Girl slices into a tune on her electric blue violin, backed by a handful of musicians offstage and accompanying herself on some sort of high-tech sampling device. It becomes quickly apparent that she's not just another pretty pair of nay-nays -- her trippy electronica sounds intriguing. And from time to time, she bursts into some vocal warbling that's part Diamanda Galas, part Bjvrk and part baby whale screechings.

Of course, this being L.A., there are more naked performance artists in the city than you can shake an M.F.A. degree at. But Blue Girl may be one of the few with the potential to garner fame on a national level without sticking a tuber up her butt, a la Karen Finley. Why, you ask? If you've seen one naked blue chick, you've seen 'em all, right? Well, at least this one has some talent. And being attractive doesn't hurt either.

Blue Girl does something most performance artists scoff at: entertain. The twentysomething Colorado native who keeps her actual name a mystery may have something significant to say about "awakening the goddess within," human evolution and all that jazz, but it's her ability to produce, direct and star in a performance art spectacle that sets her apart.

At the center of it all is this superheroine "Blue Girl," painted blue from head to toe. What's the deal with this character and what does she have to do with the actress who plays her? That's exactly what I want to find out from lunch with Blue Girl at a vegetarian-Indian joint called Paru's on Sunset Boulevard, a few blocks west of the Church of Scientology Headquarters and a few blocks east of the largest strip club in the city.

Blue Girl, or rather the actress who "channels" her, takes a break from her day job doing female voices for Comedy Central's "South Park." She races to the interview on a black motorcycle she says she engineered from the leftovers of a Harley and a Honda Rebel.

Wearing short shorts, combat boots and a skimpy halter top that reveals plenty of epidermis, only her blue hair hints at her alter ego. Soon Blue Girl's telling me all about her origins. Occasionally she pauses for a Shirley MacLaine moment, drawing the Blue One out of her shell to answer a question only she would know.

"I have no idea when Blue Girl takes over," she explains. "Like, right now I'm kind of her booking manager, organizing the show and planning dates, but I only find out about her performance afterwards."

Blue Girl is a "goddess from the 16th dimension," she tells me, who possesses her body and uses her natural talents to her own ends. Blue Girl's initial manifestation was at Burning Man in 1994. Since then, she's made appearances in Portland, Ore., and in various venues in L.A., like the Dream Theater, the Roxy and the El Rey, her fan base expanding with each performance. There's been so much interest lately that Blue Girl's had to get her own publicist. Could "The Tonight Show" be next? Maybe if she dons her blue jumpsuit, which she does occasionally when a club's liquor license excludes the possibility of nudity.

"Basically, everyone's born naked, right?" asks the diva. "I mean, somebody had to tell Blue Girl to put her clothes on. It would never even occur to her that someone would need to cover their nipples, and Blue Girl is totally against pasties. If you cover up her nipples, she might as well be fully clothed."

Sipping her mango juice, Blue Girl explains that she's an intergalactic fertility goddess on a mission to help us humans evolve onto a higher plane of being.

"I'm the embodiment of Vishuddha, the throat chakra," said Blue Girl. "In Hindu culture, the throat chakra represents transformation. A chakra is one of the energy centers in the human body, and Vishuddha is associated with freedom, truth, creativity and voice."

Sounds like it beats writing for Web sites. But why blue, Blue Girl? Why not be the Chartreuse Chanteuse, the Lavender Lady or the Burnt Orange Babe?

"Blue is the color of a lot of ancient gods. Krishna is blue. And the sky and the ocean are blue. The reason why you humans are responding to me is that you've evolved past your root chakra and your sex chakra, when you were populating the Earth, through to your power chakra -- in your solar plexus -- which you're stuck in. Now you're at a fork in the road. You're either going to destroy each other or move into the next level of consciousness -- the heart chakra."

"The ultimate ambition of the goddesses who sent me down is to reverse the course of history and prevent human beings from continuing their spiral downward into chaos and destroying their own planet," she says. "They did a little investigating and found out that the biggest conventions worldwide tend to be Michael Jackson and Madonna concerts where human beings convene and memorize the words that these superstars impart. So it was their intention to create a superstar. They want me to be the Madonna of the 21st century."

Crikey, you'd think one Madonna per millennium would be enough. Let's just hope for Blue Girl's sake she can avoid whatever causes that gap in Madonna's front teeth. That and those boxer's arms the Material Girl's developed. Scary.

Like most folks in L.A., Blue Girl hungers for fame -- even if she wants to use it to save the planet. Also like many of Hollywood's denizens, the line between fact and fiction, fantasy and reality is blurry. Does the actress actually believe the act? One wonders. There are flashes of irony and wisps of a smile on her part that suggest she doesn't take herself too seriously. Still, the mythology she's woven about herself is almost too detailed. Is the woman bonkers? Bonkers or not, she's a fascinating creature.

I wonder out loud about her blueness. What kind of body paint does she use? How long does it take? And does she need any help putting it on? My weekends are pretty open.

"There's no information that exists about that," she responds. "But I can tell you that right now there's a whole crew of people who are formulating a new kind of coating for her that glows in ultraviolet light."

She then describes how she blacks out during Blue Girl performances. I decide not to share how I usually black out (after a six-pack of Bud and a fifth of Jack Daniels on a Friday night).

"I start meditating an hour before as do the rest of the women who channel goddesses in the performance. So basically, an hour prior to the show, you've lost the personalities of most of the dancers and myself. They're just in sort of an invoking process."

Does Blue Girl have a boyfriend? Does she get any action in the blue body paint? She says I'll have to ask Blue Girl that. She pauses for a moment, and calls forth the goddess. I ask her my question.

"I'm sort of doing the bidding of a lot of dormant, latent goddess energies from the 16th dimension right now," Blue Girl says. "If they saw fit to hook me up with someone down here, I'd be inclined to take them up on it."

"I pop up in a lot of different places," she confides. "There are several instances on my Web site of artists who've had visions of me and painted them prior to meeting me. There are a lot of versions of me out there -- a little something for everyone."

A number of azure Amazons have materialized on the silver screen since Blue Girl's debut back in 1994. There was a blue chick in Luc Besson's "The Fifth Element," and Rebecca Romijn-Stamos gets butt-nekkid and blue in the upcoming comic book flick the "X Men." Has Hollywood been bitin' the Blue Girl's style?

"I support any and all naked blue chicks," responds Blue Girl, diplomatically. "We're all in this together. But I was here first, so I'm flattered."

Until Blue Girl blows up into a megastar, she's keeping her day job at "South Park." Since the suicide of Mary Kay Bergman last year, Blue Girl's been one of Bergman's unofficial replacements -- channelling Kenny's mom, Cartman's mom and Stan's mom on a regular basis. Blue Girl says she loves the work, but performing before audiences in blue body paint remains her raison d'jtre.

"The compelling image of the naked Blue Girl taps into something deep in a lot of people," she concludes. "The nipple taps into the oldest memories humans have, and the fondest they have, of the nourishment that comes from the mother. That's one reason why Blue Girl is so powerful."

I walk Blue Girl to her motorcycle, my mind flashing on her in all her blue glory as she speeds off into the afternoon smog. Yes, God bless those blue nipples. Because of them, I'm ready to worship Blue Girl any time she'll let me.