Harry Potter and the flight from reality

The young wizard's alma mater is a figment of J.K. Rowling's imagination -- but that hasn't stopped folks from signing up for boarding school. 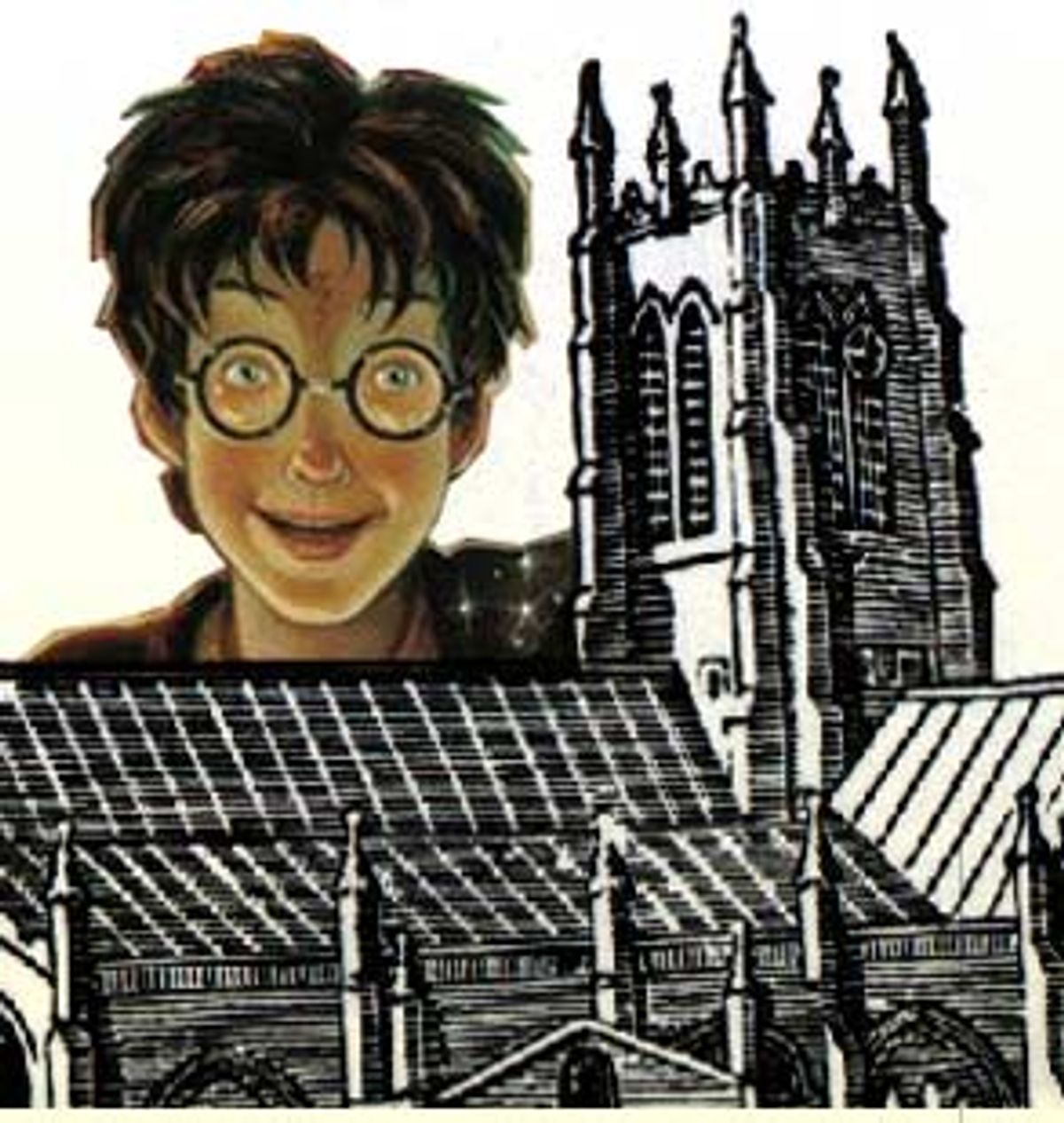 The British boarding school, regarded in the recent past as an anachronism, is at last regaining ground and seems headed for a revival -- thanks, in part, to Harry Potter and Hogwarts, the exclusive academy for wizards and witches that he attends with great devotion.

Once upon a time, a stint at private boarding school was more or less a prerequisite for future membership in the Establishment. Boys began their serious networking in prep school at age 7 or 8 and progressed at 13 to one of the perversely named "public schools." The full character-building experience took 10 years. The result: a body of alumni bound together by acquaintance, shared experience, attitude -- and inhibition.

In the earliest days, boarding schools could depend not only on the tradition-minded and socially ambitious but also on the legion of expat empire builders who sent home a dependable stream of pupils for schooling in the mother country. Not surprisingly, enrollment dropped off as the flag was lowered over successive chunks of Africa and Asia.

The dry spell was made worse when it began to dawn on a generation of parents infected by liberal, '60s-ish notions that they could save plenty of money and heartache by keeping their children at home all year. In a subsequent era of confessionalism, more than a few of the emotionally wounded stumbled into the open to talk of their resentment at "Boarding School Survivors" workshops.

The pace of defection accelerated with the recession of the early '90s. Some schools -- almost always those taking only the 8-to-13-year-olds -- closed forever. Others broke with tradition to take day pupils. The big-name public schools were largely unscathed, although they were sometimes obliged to trawl the world for recruits. In 1985 the number of full-time boarders in Britain stood at 125,000. A little more than a decade later, it had dropped to barely 80,000. The trend looked irreversible.

Until school-loving boy wonder Harry Potter arrived on the scene atop his Nimbus 2000 broomstick. Since the books first hit the bestseller lists, the Independent Schools Information Service has noted the first signs of a reversal. The number of full-time boarders looks set to stabilize; the number boarding on an occasional basis has risen sharply.

Coincidence? There is indeed a slew of factors at work. Britain's return to prosperity means more families can afford the fees; the very idea of "flexible boarding" is new. Still, even the Boarding Education Alliance -- founded three years ago to revive the idea of boarding -- is ready to acknowledge Harry's role. Yes, says the BEA, immersion in the Utopian world of Hogwarts has helped sell the notion of boarding to a new generation of parents and kids.

Every Potter fan knows why. Hogwarts may be spook infested and occasionally scary, but it still represents the kind of ordered and delightful world that most children -- and plenty of adults -- crave. There are simple rules to follow, a clear hierarchy of prefects and teachers, points to be won and some easily identifiable bad guys. Character at Hogwarts means more than having a rich dad and -- in the end -- virtue is usually rewarded. And the food? Sublime, as is the dining room.

In short, it's a lousy guide to real life -- and the British boarding school system. Take it from a middle-aged survivor: Even without the magic, Hogwarts bears the same relation to reality as Narnia does to the back of my bedroom closet. Some aspects of the experience have changed since my days in uniform -- the BEA is anxious to detail various leaps forward -- but even with hot water and the ability to contact one's parents, there are few traces of Hogwarts in the real-world institutions for ambitious boys and girls of a certain caste.

The differences begin at the beginning. The Hogwarts pupil takes his first ride on the school train at 11. By that age I was a three-year veteran of those emotionally supercharged departure scenes at London railway stations: I in short flannel trousers and uniform cap waiting on the platform with mum and dad, all of us wearing brave "Brief Encounter" smiles.

To cry was a source of shame and embarrassment. At age 9, my elder brother protectively explained away my tears as "a problem with his eyes." Look no further than the boarding school for an explanation of the British male's exaggerated distaste for any show of emotion -- unless it is cheerfulness, the only frivolous feeling allowed.

Harry, a confident, troll-slaying kind of kid, grateful to be away from his sadistic uncle and aunt, is able to thrive. Perhaps, if such a child were to exist, he, too, would enjoy boarding school. It is the sensitive child (often a natural state at the age of 7) who should stay away. Growing up is hard enough without the extra angst of expulsion from the home and the curious bifocal existence that follows.

Regardless of his age or propensity for hard knocks, Harry enjoys at Hogwarts a strangely enlightened regime. There is a sense that those in authority are interested in his welfare. Headmaster Albus Dumbledore is revered; Madam Pomfrey, the nurse, can work magic. In my day, pastoral care after the age of 13 was the business of a housemaster rarely seen outside prayers or mealtimes and his 60-something housekeeper. Bullying was endemic although on the wane in the enlightened '70s, a period of reaction against some of the traditional brutalities. (My father was astonished to find that as teenagers we were addressing each other by first names.)

Harry was more or less protected from hardcore abuse at the hands of his schoolmates by an ingenious "sorting" system -- the magical segregation of children into houses by type -- practiced at Hogwarts. Harry gets to share his life with a more or less like-minded bunch of Gryffindors. The worst trial of real-life boarding school is mixing 24 hours a day with an unsorted crowd of HufflePuffs, Ravenclaws and Slytherins. The only advantage is that relentless exposure to bad hats (think Malfoy, Crabbe and Goyle) teaches some early lessons in conflict avoidance.

Another happy mystery in Potter's education is the source of his school tuition. Even when conditions were Spartan -- we bathed in tin tubs -- our fees were big enough to chew a big hole out of any banker's or lawyer's income. Today it can cost 15,000 pounds (almost $23,000) a year to keep a child at a top-flight school. One presumes that Hogwarts offers generous scholarships. How else can Pa Weasley fund the schooling of five kids simultaneously on a civil servant's salary?

Crucially, Hogwarts takes girls, a type more or less unknown to the British boarding male of the '70s and still introduced only in limited numbers. Harry and best mate Ron may have their differences with Hermione but at least they're friends. At 11, my capacity for anything so tricky as simple friendship with a girl was still a decade or so away.

Of course, there are some similarities. Take the Hogwarts attitude to the outside world. For us, the kids who went home every night to mum's cooking, sympathy and a spell in front of the TV inhabited a parallel universe, forgotten rather than envied or scorned. They were just different: They were Muggles.

And the sports obsession. Harry may not look the superjock -- remember the nerdy specs and spiky hair -- but he's a natural Quidditch player and so on the fast track to social success. Spot on. Games fetishism is a hazard at any boys school, but at a British boarding school it's reinforced by tradition and convenience. Games with wacky rules (we played a variant of soccer with the pitch enclosed in netting) enhance a school's distinction, and some way must be found to occupy those slabs of empty time between lunch and tea.

Lucky Potter, a natural athlete with a turbocharged broomstick. In the '70s, it was just about cool to fake indifference to organized sport, but, as a closet conformist, I'd have traded success in class for a place on almost any team at any level. For their part, the sporty types achieve a success so complete and intense that nothing in later life will ever quite compare. (A wishful tortoise's perspective: The hares may see it differently.)

Maybe it's all different these days. The Boarding Education Alliance talks of a new "culture of open communication and partnership." Its literature batters home the new marketing message: The British boarding school is no longer a rough forcing house designed to train a self-perpetuating elite. It's for enlightened parents (and the divorced) interested in imparting some early lessons in self-reliance and community living without the brutalizing effects of incarceration.

And only through boarding can these fortunate children derive the full benefits of swanky facilities that today's schools offer. What you're buying is an updated Hogwarts experience -- all those cozy values without the misery -- not a 19th century survival.

Read the BEA's dossier for proof of the new home-away-from-home style. According to its exhaustive survey, almost half of boarding pupils now live within 50 miles of the school, 80 percent sleep under their own duvets, 90 percent tack their own posters on their walls and, yes, most actually took part in the decision to board. One in three families is earning less than 50,000 pounds (almost $76,000) a year and many are scrimping hard to find the fees -- a measure of how highly they value the boarding school product.

The worst barbarisms are forgotten. Fewer and fewer kids are starting to board at 8 or younger. (My cousin began at 5, a near record even for the late '50s.) Children are even allowed to go home on weekends. For contact with home we depended on the mail and, until the mid-'60s, a single half-term visit. The law now obliges boarding schools to install telephones where children can call home without being overheard.

Certainly the curriculum has developed. How about those 18th-birthday pictures this month of an aproned Prince William learning to cook? Inconceivable back in the '70s. Today's cost-aware parents don't want their children learning to scan Latin verse (my big achievement in the Summer of Love); they want skillful examinees -- the best boarding schools always figure close to the top of the academic charts -- who might also make well-rounded adults.

What the BEA leaves discreetly unsaid, however, are the more questionable advantages that go with a boarding education. Education was always a class issue in Britain, and whatever the talk of meritocracy, the old snobberies survive just enough to matter. Pick the right school -- all the swankiest are still dominated by boarders -- and it'll still add some handy tone to a risumi.

The 30 percent of today's parents in Britain who never boarded know the score as well as any Hogwarts alumnus. The name of his old school won't necessarily guarantee Harry that job at Gringotts Bank, but it might help. No doubt there'll be a few other Gryffindors on the board.

Maybe it is true; if you get to them early enough, most kids will accept almost any way of life as "normal." But acceptance is a long way from enjoyment. Plucked from home and dropped, unsorted and without magic wands, into a round-the-clock educational regime, children become, in my mother's phrase, "polite strangers." (As I recall, the odd got odder and the sad got sadder.)

Conditions in real-world boarding schools may have improved, but better conditions won't render their unnatural circumstances natural. Muggles should proceed in full awareness of the truth: Lovely boy that he is, Harry Potter is a creature of fiction as rare as any centaur or house elf. And the same can be said of his beloved alma mater.

William Underhill is a freelance writer based in London.