Can talking kill you?

If you're lonely -- and maybe even if you aren't -- just the act of speaking can elevate your blood pressure to dangerous levels, says psychologist James Lynch. 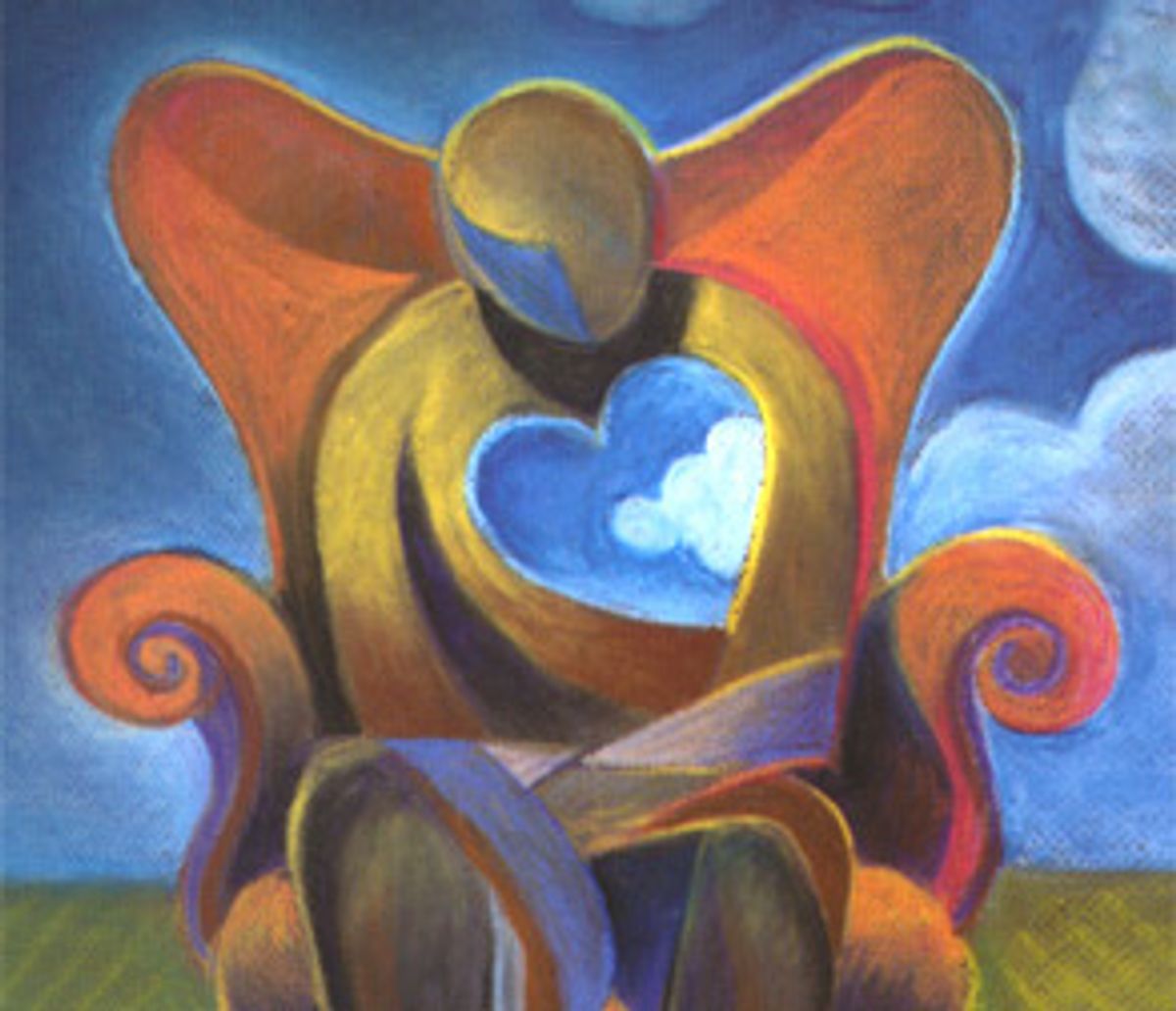 About 30 years ago, Baltimore psychologist James L. Lynch came up with an intriguing theory: that people can die of loneliness and a broken heart. He believed that those who are depressed and live alone, without close family or friends, have a hidden risk factor for cardiovascular disease and possibly cancer. You may assume the medical establishment, which was never much for existentialism, did not love the idea.

Since then, scores of medical tests by researchers have reached similar results. The relationship between how we live and communicate has an effect on our health. The problem, of course, is trying to figure out how this process affects the physical body.

Now Lynch, in a new book, "A Cry Unheard: New Insights Into the Medical Consequences of Loneliness," thinks he has solved at least part of the riddle. He believes that being lonely and talking can increase one's chances for heart disease.

He has found that everyone's blood pressure goes up when they talk and goes down when they listen. People who are more likely to be lonely -- the divorced, the inadvertently single, the recluse in the mountain cabin, the shy maiden aunt or uncle -- can have surges of blood pressure when they have to speak. Words may eventually kill them. Conversation becomes so stressful for them that they withdraw even more and the surges during their growingly infrequent conversations become simply lethal.

Lynch believes that virtually every person has this risk factor, as well as people with heart disease, migraines and hypertension -- millions of us.

Am I one of them? I wanted to find out, so I went to visit him at his office in Towson, Md., a suburb just outside Baltimore. When I sat down for the interview, Lynch almost instantly hooked me up to an automatic blood pressure machine -- a ritual he does with all his patients -- so he could monitor my risk for cardiovascular disease during our discussion.

You've written that being lonely has a profound effect on children as they grow up.

Well, look at the murders in schools. In every single case, the kids doing the shooting were the outsiders, the lonely, the angry. In 1998, Kip Kinkel murdered his mother and father, then drove to school, killed two classmates, and wounded 25 others. He had been held back in class because of undiscovered dyslexia and when it was obvious he wouldn't live up to his parents' expectations, he retreated inside himself. He became socially isolated and was no longer able to communicate. He wrote in his journal: "I sit here all alone. I don't know who I am. I want to be something I can never be. I try so hard every day. But in the end, I hate myself for what I've become." In every school shooting, you will find a kid like that.

You talk to any child psychologist or psychiatrist today and they will all tell you the same thing: We are all seeing disturbances we never saw before and escalating levels of it. Politicians want to put more computers in the schools when these children already lack constructive human dialog. The best we can do is create very bright killers if we're not careful. Computers may make the alienation worse. You notice I don't have one in my office.

How does this process shorten life even if the kid doesn't turn into a murderer?

If you use talk to humiliate, abuse or ridicule a child you shame that child, you break the child's heart. I call it toxic talk. Now the child goes to school and all education is based on talking. You asked the shamed child to talk and the blood pressure goes way up. It's the flight/fight reflex, and it was designed to stimulate the whole body as a form of defense. In this case, it is a weapon of self-destruction because the defense is unnecessary. They have to flee, and one way to flee is to drugs; another is to drop out, or become violent.

However, for the rest of their lives, every time these kids try to communicate, they get massive excessive surges of blood pressure that wears down their bodies. This is all while they are withdrawing further from the world.

A French biologist once said to be adult is to be alone. He never said it was deadly. Is this problem something new?

The disease of the age is disembodied dialogue -- meaning speaking outside our flesh and blood, an entirely new concept to the 20th century. My mother came from a rural village in northern Donegal. She was born in 1905, my father in 1900. The only voices they ever heard were face-to-face. The only music you ever heard was face-to-face. Electronic wires lifted speech out of the body. Dialog became disembodied and disembodied dialog now has become the norm. It has created a loneliness that never existed before. If the current trends persist, communicative disease and its resultant loneliness will be a leading cause of premature death in the 21st century.

How do we know the rise in blood pressure is not just a physical reaction to talking?

We found that even deaf people who use sign language have a dramatic increase in blood pressure when they sign, but there is no change when they just move their hands. It is the act of communication, the dialog, that raises blood pressure.

But how does that kill, and shouldn't gregarious people be more affected than the quiet, lonely types?

By the way, the only people this does not happen to are schizophrenics, who are so detached from the world that even their blood pressure goes down even when they talk.

Will just regular chitchat drive up your blood pressure dangerously?

Yours is up and we are not even talking about you. And you are on hypertension medicine. Every time you talk, your blood pressure goes up but you almost never feel it. It can be very powerful. We did a study of 60 heart patients, all of whom had bypass surgery or angioplasty. All were on medication to control their heart rate and blood pressure. Here's what you see, typically. This will shock you. If a heart patient is talking to you and he says, "I may lose my job," or, "It's difficult to talk to my wife," boom, up goes the blood pressure despite his medication.

We gave them interviews specifically designed to be non-stressful. The average patient increases his diastolic pressure 34 millimeters more than during stressful maximal exercise. They are just talking.

It's not just oral communication that can have a profound effect on the body, is it?

No. For 14 days, a 54-year-old man was in a complete coma from an accident, paralyzed with d-tubocurarine, which prevents seizures. He couldn't move a muscle. No one visited him, no family or friends -- he was completely alone. When they finally decided to pull the plug, a nurse sat down beside his bed and stroked his hand. She told him not to be afraid, that she would stay with him. His heart rate went down and rhythm became more regular immediately when the nurse began to comfort him, even paralyzed and in a coma. I don't think it was auditory in this case, I think it was tactile, but that is a form of communication too and it can have an effect on the body.

You write that when the lonely speak, it is a silent cry.

The real communication is hidden. You don't feel it, and you don't show it. I probably have recorded the blood pressure of more Holocaust victims than anyone else has in the world while they are talking because that's what I do. I work at the heart center affiliated with Sinai Hospital in Baltimore. I'm seeing them as heart attack victims in their 70s. Before they talk about the Holocaust, they have a blood pressure of 120/60. All of a sudden, their blood pressures can rise to 240/150.

That would hardly qualify as a big surprise.

It should not be a surprise except that they look calm and they don't feel it. You look into their eyes and see no hint of a reaction. It's happening to their bodies, but they are not living in their bodies anymore -- at least when they are talking about their experiences. They are so traumatized that they can't feel it anymore. And talking about it isn't necessarily helpful. Freud's whole notion of catharsis -- "tell me how you were raped or abused" -- is wrong. Should I say, "Well, tell me more about Buchenwald. Now that you're having a stroke, should I stop that conversation?"

You point out that studies of heart disease haven't picked this up as a risk factor. They point to cholesterol, hypertension, diet, lack of exercise, that sort of thing. You are particularly critical of the famous 50-year-old Framingham heart study, which is something of an icon in medicine.

Was Framingham, Mass., really a representative town in which to do a cardiovascular study? You could describe Framingham as a relatively stress-free community. It certainly isn't East Baltimore, Harlem or Reno, Nevada. The researchers actually stacked the deck against themselves. They inadvertently ignored educational, social, interpersonal and psychological risk factors. If they had done that study in Harlem, they would have found all those risk factors in great amounts.

Loneliness and dialogue are the risk factors behind the risk factors. The researchers never ask why people smoke; why they drink alcohol; why they are obese. Behind it all is an inability to communicate. It's all self-destruction. If all of America was like Framingham then the health data they produced might be more applicable to the rest of this country.

Now we know what you consider to be the hidden risk factors. So what should people do about it? You don't offer any answers in your book.

The trouble you always confront with these incredibly complex topics, like the destruction of our children, is that there are no easy answers. Basically, my answer is that we have to alter our consciousness of the nature of the problem. That's why I took on Framingham. The drug companies can beat the drums about cholesterol. Who is beating the drum for this? There's no money in this. I don't mean this in a cynical sense. I know what drives the system.

The best advice is to remember any conversation that does not move the heart is trivial -- and one that moves it too much might prove fatal.

Joel N. Shurking is on the staff of the office of communication and public affairs at Johns Hopkins Medical Institutions, a freelance science writer and the author of nine books.