For today's young Hasidic couples, pleasurable sex just might be kosher after all. 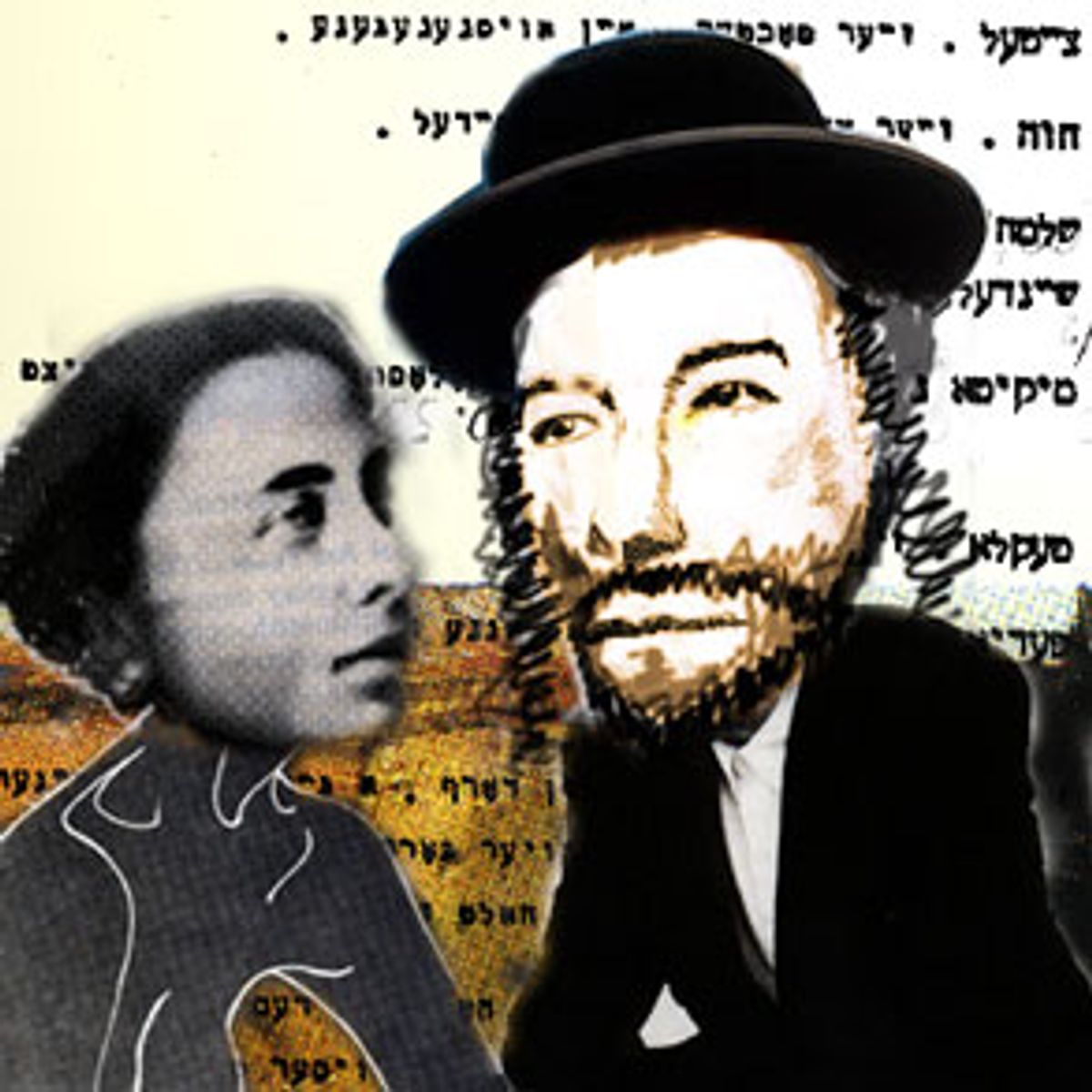 Moishe is shy and soft-spoken, and his cheeks turn pink as I try to make out the personal details of his sex life. We're hiding in his cousin Shloimi's apartment. Shloimi's away on business.

If Moishe were seen with me, a woman (especially a non-Hasidic one), it would be the talk of the town. His wife would probably divorce him, and his five children wouldn't be able to find eligible marriage partners when they grew up. But he wants to connect with the greater world because he has big news, but no one he can tell it to within his community. We both feel the weight of the world resting on this conversation, so we carry on through the tension.

Moishe is tripping over broken English and I'm thrown off by Yiddishisms and confusing innuendo. He has never before talked about sex with a woman. He has hardly talked about it with men. But he's dying to let me, a representative of the modern world, know that he is more than just a skinny, 28-year-old Hasidic camera salesman, more than just a baby-making machine.

He wants to tell me that he just experienced something sexually extraordinary.

"People see your side curls and funny hat and jacket and think you're from outer space. And the truth is, you feel like you are," Moishe says. But he wants pleasure. Moishe wants to give pleasure. He yearns for physical, emotional and intellectual completion.

"I gave my wife an orgasm for the first time," he says. He clears his throat and his voice finally projects: "And it was the most emotionally satisfying experience I ever had."

Moishe and his wife are just one of a new generation of young Hasidic couples who privately insist that sexual fulfillment is a central aspect of a healthy, happy and holy Jewish home. Rabbi David Bleich, author of the four-volume series "Contemporary Khalachic Problems," explains that while some of the great influential rabbis condemned sexual relations that did not lead to reproduction, many others encouraged pleasure for the sake of pleasure and marital closeness. Ultimately, he says, the pursuit of sexual satisfaction is not necessarily a deviation from biblical texts. "Rather, there is just endless debate about its appropriate boundaries."

So the younger generation is choosing its rabbis wisely. These days, Moishe says, more and more Hasidim are having sex within marriage for the sake of sex. He cites the high condom sales in Hasidic neighborhoods as proof. "People aren't coming from out of town to buy condoms!" he laughs. "Couples these days are more comfortable with exploring intimacy. They still have certain taboos, like oral sex, but they're becoming more open-minded. For example, I used to be afraid of oral sex."

Binyamin L. Jolkovsky, a Hasidic resident of Borough Park, Brooklyn, and editor in chief of Jewish World Review, says that in most parts of the Hasidic community, oral sex is considered degrading to women. "And from what I understand, women in secular society are also uncomfortable with such activity for the same reason: It's embarrassing for them. Even I'm turning red talking about it."

But after seven years of marriage, Moishe went down on his wife -- and pleased her. "We love each other more now. We feel an indescribable closeness." In the same breath, Moishe mentions that they don't have much to talk about. Hasidic men spend their days studying or working, while Hasidic women spend their lives raising children and maintaining the home. "But all the guys at work are jealous of the lunches she packs me: that every day she leaves a sweet note in the bag. She doesn't have to do that."

Moishe tells me that he shared his new accomplishment with his best friend, who listened detail for detail, giggled, then called him "a fucking liar." "I told him: 'I swear, go down on [your wife] and she will have pleasure.' Two weeks later the nebbish thanked me."

But the question arises: Can going down on a woman be kosher? According to Rabbi Shmuley Boteach, the 31-year-old Hasidic author of "Kosher Sex: A Recipe for Passion and Intimacy," the answer is yes. "One of the great rabbis said that the matriarchs had sex for the sake of pleasure," he points out, "and the laws themselves state that a man is obligated to 'give a woman sexual pleasure' -- not necessarily have sex with her."

The greatest Talmudic commentator of all time, says Boteach, said that the "true connection between husband and wife cannot be obtained without sexual pleasure." Boteach argues not only that sexual pleasure is acceptable according to Jewish law but that the traditional system has created an ultraerotic dynamic between men and women.

"I would make a money bet that Hasidic couples, especially the young ones, are having better sex than those in the secular world," he declares. "There's nothing more exciting than depriving yourself of pleasure, waiting for marriage to even touch a member of the opposite sex and then discovering sexuality with that innocent partner, who's on your exact same level." Also, he adds, according to Jewish law a husband and wife must refrain from sexual activity for two weeks every month. "Refraining keeps the passion alive."

As an 18-year-old boy preparing for his wedding, Moishe had never seen breasts or a naked pair of women's legs. He didn't know women felt sexual things. He only knew that he was supposed to be nice to his 17-year-old wife-to-be, and impregnate her.

Moishe met Rachel for the first time on the day of their engagement. She was sitting across from him, flanked by her parents and grandparents, her small, frumpy frame sunk into a green sofa. After some schmoozing, the family left the two virgins alone so they could decide for themselves if their life partners sat before them. The room was bright and breezy, with only an unframed poster of a rebbe and a particleboard bookcase weighed down by a 1932 Talmud collection. With little else to do, Moishe and Rachel cocked their heads to the side and stared at the floor. Later that evening, the families asked each of them in private if they would agree to marry. Why not? they said.

"On our wedding night, we were terrified," Moishe tells me. "I had never in my life even talked to a woman besides my family members." As is typically done, the week before the ceremony, a rabbi taught Moishe what to do: "Kiss her, be nice, open her legs and put it in." The rabbi gave his number to Moishe in case they ran into a problem.

"But we didn't call. It all worked out that night," Moishe says with a grin. Today they are 28 and 27, with five children, 48 uncles and aunts and 128 cousins, all living, laughing, dancing, arguing, falling in love and discovering the art of screwing in Borough Park. Bracha Levertov, the lady who runs the main mikvah (ritual bath) in Crown Heights, Brooklyn, points to the law that requires couples to have sex on the Sabbath. "No matter what you're fighting about," she says, "you know that you have to make up by Friday. This keeps things very alive in Orthodox communities."

But a year into his marriage, Moishe felt something was wrong. "I knew that girls were supposed to have an orgasm, too." He had read it somewhere. "My wife never complained, but it was driving me crazy." He and his wife tried to figure it out: "I did dis, I did dat," he says in his Yiddish accent, until finally they went to an older Hasidic sex therapist. "The schmuck told us that the problem was that we have a television. He said it interfered with spontaneity."

In Hasidic communities, Moishe explains, televisions are forbidden. "We were looking for tips on technique. He was looking for a way to blame our sexual problems on our religious transgressions." So Moishe and Rachel had to figure it out completely on their own. "And that made us closer in a way."

Moishe's sex therapist apparently was not of the new "Boteach generation." And many older Hasidim do not share the controversial author's liberal and romantic views of Hasidic Jewish life.

Moishe takes me around his workplace to meet several colleagues or "characters," as he puts it, under the pretense that I'm a customer. With a straight face, I ask a few of them -- each in private -- what they think of Boteach's views: "I just read a book," I tell them, "by a Hasidic man who says Hasidim are having the best sex in New York City."

Moishe's 54-year-old friend Mutty, a Hasidic diamond salesman of the Satmar sect, starts shaking in his seat from laughing at the dopey-eyed girl before him. "This is the biggest bunch of bullshit I have ever heard!" He takes a deep breath and coughs. "What I see is a community of miserable, repressed people. This is the sad truth."

In fact, traditional practices in Satmar, the largest and most rigid Hasidic sect, have not always led to romantic marital unions, instead compelling the young, curious and repressed to unexpected places: S/M bars, 42nd Street and topless clubs.

Moishe takes me to meet his "wild" associate, Mendy. "You want to know about sex in the Hasidic community? In the middle of the night, teachers would come and throw the covers off you if you were sleeping on your belly," says Mendy, a 29-year-old married man with a whips-and-chains fetish. "We had to sleep on our sides to ensure that we wouldn't accidentally get aroused." He and others were told that sexual pleasure is only to encourage reproduction, and that any "wasted seed" is a sin.

That night, Mendy tucks his side curls behind his ears as he shows me the S/M clubs that he and his Yiddish friends frequent. They all like to be dominated. I ask him if he enjoys having sex "forced" upon him because it rids him of the guilt of wanting to have sex. "I never thought about it," he says. "But probably." Of course, only a very small percentage of Hasidic Jews venture into these underworlds. As Mendy and I talk quietly Moishe chimes in: "What is S/M, anyway?"

As we discuss these unfamiliar sexual practices, including the implicit infidelity, Moishe's face reddens again.

"When we hear of someone going off the path," Moishe says, "it is such a shock. Because nobody's doing it. Most of us are just focused on trying to figure out how to be happy and holy, and how to make our families happy, on learning about our wives and ourselves."

It's Friday afternoon and Mendy begins closing the shop in preparation for the Sabbath. Moishe looks at the time and packs his things quickly. It has been two weeks since he and his wife made love and Shabbos is a sacred time reserved for them. He smiles at me, nods humbly and hurries home.