In praise of the cranky, misanthropic, uncompromising nobodies of literature -- may they screw up forever. 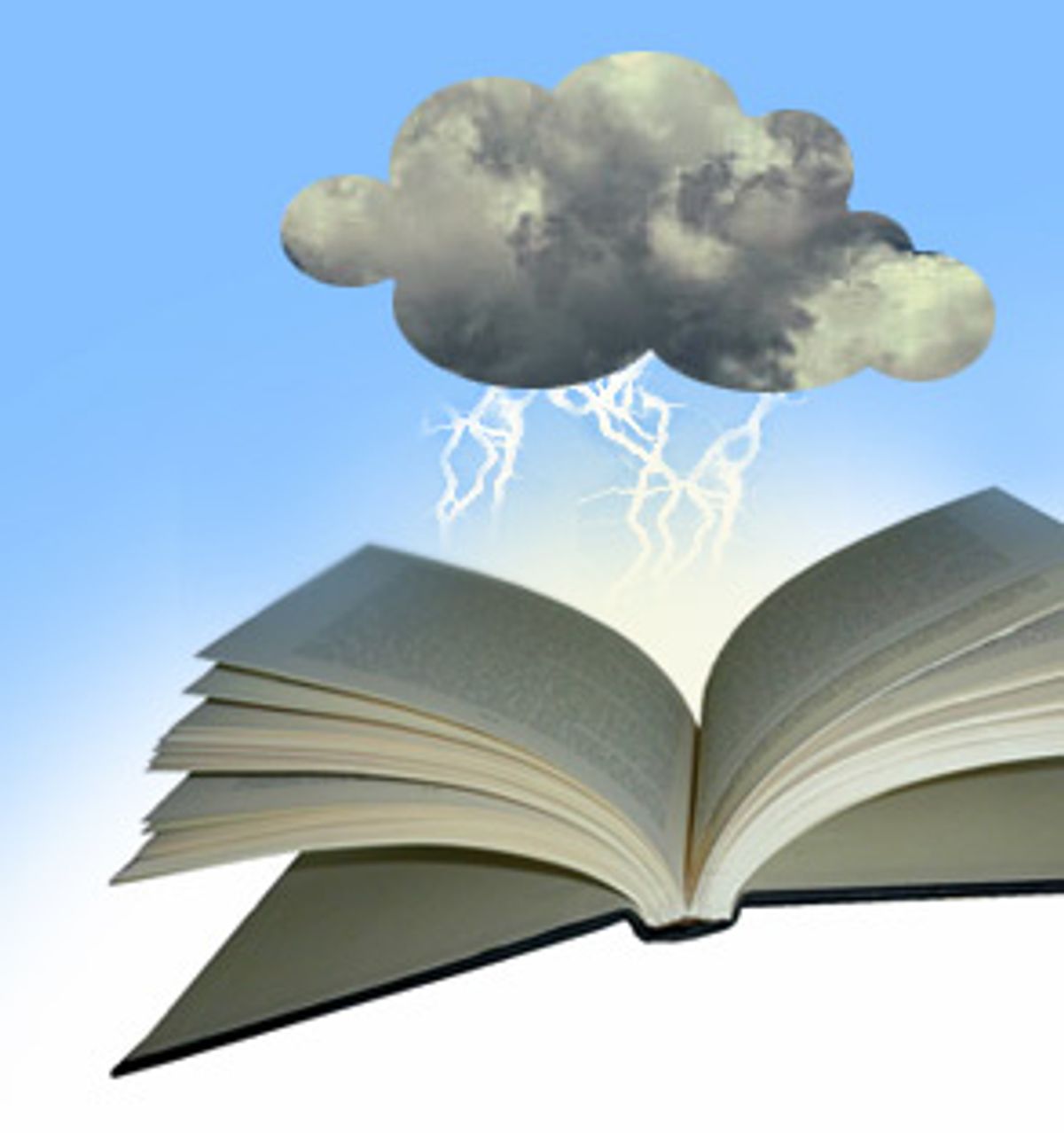 "Perhaps the price of comfort is that life passes more rapidly," begins Arthur Nersesian's novel "The Fuck-Up," whose unnamed narrator sabotages his own life in one maniacally funny scene after another. "But for anyone who has lived in uneasiness, even for a short, memorable duration, it's a trade-off that will gladly be made."

This attitude is shared by most of the madmen, underdogs, drunks and crackpots who populate the literary genre I call loser lit, an immensely popular but seldom identified tradition that includes Kingsley Amis' "Lucky Jim," David Gates' "Jernigan," Joyce Cary's "The Horse's Mouth," Knut Hamsun's "Hunger," J.P. Donleavy's "The Ginger Man," Elliott Baker's "A Fine Madness," Michael Chabon's "Wonder Boys," John Kennedy Toole's "A Confederacy of Dunces" and Frederick Exley's "A Fan's Notes." There are many more, but never enough.

The plot of "The Fuck-Up" follows the classic loser lit trajectory: Instead of conforming to expectations and living up to his potential, the loser screws up, gets drunk, can't seem to get it together with the right woman, makes a mess of his home life (if he has a home) and courts failure at every turn. Having no more discernible target than "the way things are" -- which oppresses him and drives him up the wall, even if he can't do anything about it -- his urge for rebellion festers in the crucible of his self-consciousness, where it mutates eventually into an incurable jones to shoot himself in the foot.

"Writing 'The Fuck-Up' was a form of purging," Nersesian told me recently. "It was like vomiting up all the shit I had to swallow: having a crappy apartment, a minimum-wage job and a critical girlfriend who rubbed my nose in my failures. I wrote it to keep from feeling sorry for myself."

I know exactly what he means. I lived a nearly identical version of the life he describes, which I survived in part by reading every loser lit book I could get my hands on. The books gave me comic relief, reassurance and companionship, as well as the joyfully subversive glee of seeing my own rebellious, self-destructive instincts acted out on the page without actually having to sink quite that low myself. I wrote my first novel, "In the Drink," as a cathartic antidote to self-pity, inspired by and in homage to the great losers who'd sustained me through those years of petty humiliations and constant low-level rage.

I've reread three of them in particular -- "The Horse's Mouth," "Lucky Jim" and "Jernigan" -- so many times that I've lost count, but every single time I'm completely riveted as the story approaches the inevitable bottoming out toward which the loser has been sliding since the opening sentence: Gulley Jimson moves into his out-of-town millionaire patron's house, allows the riffraff of London's art world to move in with him, trashes the house and sells all the furniture to buy more paints; Jim Dixon, while delivering the speech on Merrie England that he hopes will save his academic career, lapses unwittingly into a drunken but dead-on imitation of Professor Welch, his pathologically irritating boss; Peter Jernigan holds his family at gunpoint, pissing his pants but too drunk to know it. Watching things go so unbelievably wrong for these guys gives me a vicarious thrill similar to the one I get from accounts of mountain climbers running out of oxygen near the summit of Everest or suburban families being terrorized by murderous poltergeists -- while I read in the comfort and safety of my armchair.

However, and perhaps not surprisingly, book editors who encounter a loser in manuscript form aren't always eager to take a chance on the unregenerate crank. Yet the unknown loser might be the literary equivalent of the borderline-obnoxious wag no one wants anything to do with at the beginning of a party but whose unbridled originality has won over a roomful of fans by the end of the night. Famously, "A Confederacy of Dunces," Toole's Pulitzer Prize-winning novel, was rejected so many times and by so many publishers that the distraught author committed suicide. Years later, "Confederacy" is on many people's favorite-book lists, providing inspiration and solace for fellow high-minded misfits.

After he finished "The Fuck-Up" in 1986, Nersesian tried and failed for years to get it published through conventional channels. Over the course of four years, he photocopied three 500-print runs and peddled them himself, on the street. Each time, the books sold out almost immediately; over the years, by word of mouth alone, the novel became a cult favorite, and Nersesian began to get fan mail from all over the world. In 1997, Akashic, an independent press, put out an edition of the novel that quickly went into a third printing. In May 1999, it was released in paperback by Simon and Schuster's Pocket Books in conjunction with MTV, and is in its fifth printing. Akashic recently published Nersesian's second novel, "Manhattan Lover Boy." In an irony worthy of the book itself, "The Fuck-Up" was recently optioned by Disney: A clause in the contract states that the eponymous fuckup himself may be used as a Disneyland "greeter character."

At first blush, it seems odd that loser lit books are rejected initially, then go on to be fiercely loved by legions of readers. This apparent contradiction might be due to the fact that if they didn't screw up their lives, most losers would be the kind of power-elite, Type A go-getters whom readers love to hate. The thing that gives wary editors pause about them may be the very quality that endears them, finally, to so many fans: Losers make no apology for their outrageous behavior, offer no self-justification. Ironically, they often start out as the kind of people slated to rule: Most of them are male, white, straight, well educated and usually Anglo-something or other. Implicit in their flouting of success and power is the fact that they have the luxury to do so; at the core of every loser lit narrative is the recognition that the loser's problems are entirely of his own making. He's the victim of nothing but his own damned self.

Gates' Peter Jernigan lives in a bleakly evoked Westchester in the '80s, the sole survivor of a shipwrecked marriage that ended in his wife's "accidental" death a year before the book opens. Soon into the story, he's fired from his job at a Manhattan real estate firm, a position he fell into by default a decade earlier and never found the wherewithal to escape on his own terms. The real problem, however, lies in his own head. "I must have thought it was okay to have this discrepancy between your thoughts and what was actually going on," he thinks at one point, "and you could just keep the two going side by side, no problem." But of course there is a problem: This chronic "disconnect," as he calls it, makes the disintegration of his life inevitable. He eventually ends up in rehab, but the book's final passage leaves no doubt that this "recovery" is only a palliative. What he suffers from isn't curable.

"Only connect," E.M. Forster's often-quoted epigraph from "Howards End," is thrown over by losers in favor of Shakespeare's "To thine own self be true." Losers are what they are; they can't or won't settle down, straighten out, grow up. They're constitutionally unsuited for any degree of conventional life, nauseated by "playing the game," by the self-betrayals necessary to "fit in" or "make it."

Jim Dixon of "Lucky Jim" is a 27-year-old teacher of medieval history at a medium-sized English university and completely unsuited to a career in academia by virtue of an inability to stomach bullshitting. Unable to suppress his contempt for everyone around him, he finds his true feelings leaking out, particularly in the company of the "pacifist bearded painting" Bertrand Welch, his boss's pretentious, despicable son, and the man who stands to win everything Dixon himself most wants. At the book's lowest and funniest point, Jim naturally gets the sack, but at the eleventh hour he's unexpectedly rewarded for the very qualities that make him a loser.

A great loser lit novel also offers the most rare and necessary rewards of literature: It does something new with language, knocks the stuffing out of whatever needs it and embodies cranky individualism in all its lonesome glory. Losers tell their stories in language as subversive and idiosyncratic as they are: quirky, untrammeled prose that's often "overwritten" and baroque and never shies away from chaos, crabbiness or grit. There are very few minimalists in this bunch; in as many different literary styles as there are losers, they defy expectations raised by the "terse prose," "honest storytelling" and "plain speech" so prized in American letters. Loser lit antiheroes aren't well intentioned or earnest; they don't care whether you like them or not. They're self-mocking, ironic and inventive; they narrate their downfalls with manic wordplay, rampant metaphors, wisecracks and escalating flights of spleen-fueled lyricism.

Gulley Jimson, the painter antihero of Cary's "The Horse's Mouth," is as lyrically splenetic as they come. When the book begins, he's just out of prison. Hungry, cold and with holes in his boots, he shambles energetically around London, trying to extract money from anyone he thinks might be persuaded to part with it, and planning great new paintings, none of which he ever manages to complete, not because of lack of vision (in which he abounds) but, rather, because of unfortunate circumstances, most of which are in one way or another his own fault. Every time he seems to be in for a bit of luck, he manages to ruin it for himself.

Gulley never shuts up. William Blake's poetry serves as refrain and counterpoint to his disquisitions on love, religion, morality, women, politics and, of course, art -- all of it manic, nonstop, dizzyingly subversive. His staccato descriptions of London are as dazzling and weird as Blake's paintings: "Sun in a mist. Like an orange in a fried fish shop. All bright below. Low tide, dusty water and a crooked bar of straw, chicken-boxes, dirt and oil from mud to mud. Like a viper swimming in skim milk. The old serpent, symbol of nature and love." He talks to himself, to us, to anyone who will listen, and he dies talking, although the nun who's attending him begs him not to.

"It's dangerous for you to talk," she says, "you're very seriously ill." "Not so seriously as you're well," he shoots back. "How don't you enjoy life, mother. I should laugh all around my neck at this minute if my shirt wasn't a bit on the tight side." "It would be better for you to pray." "Same thing, mother."

And out he goes.