When Oregon state healthcare refuses to pay for a potentially lifesaving operation, a multimillionaire offers to pick up the $250,000 tab. 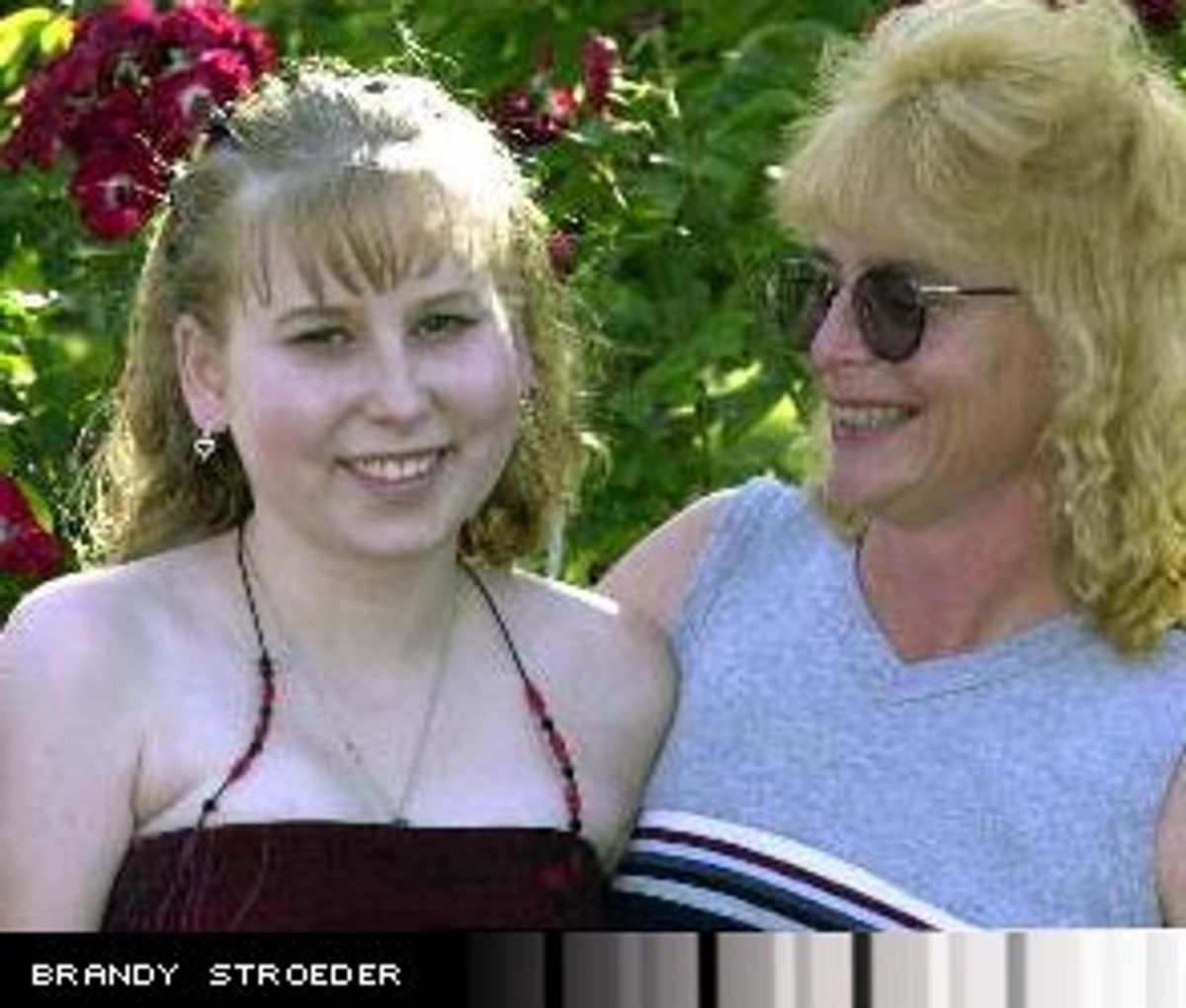 It's such a wholesome, all-American fable, the type Ronald Reagan used to spin: The plucky girl with cystic fibrosis finds her savior in a big-hearted multimillionaire, who guarantees to pay for a lifesaving lung-liver transplant after government bureaucrats turn her down.

In the fable, the bureaucrats scuttle back into their partitions and the girl gets well. Fade to sunset and and a puppy licking the girl's face.

But the real-life story of 18-year-old Brandy Stroeder may come to embody a harsher truth: namely, that even as we perfect more and more advanced medical procedures, not everyone is going to have access to them. And, as Americans struggle to come up with an equitable health care system, that even the best-intentioned system can seem heartless when forced to balance the good of thousands against an individual's suffering.

The story began last fall when doctors told Brandy, who lives with her single mother in a weather-beaten farmhouse about an hour south of Portland, Ore., that she was likely to die within a year unless she got a simultaneous lung-liver transplant, an operation that has been performed fewer than a dozen times in the United States.

Under Oregon's unique Medicaid system, which openly rations healthcare in order to provide basic care to as broad a population as possible, Brandy was eligible for a liver transplant or a lung transplant, but not both. In January, and again after a review in May, the state-run health plan said no. There wasn't enough data to show the $250,000 procedure was worthwhile, the health plan's administrators said, and the plan didn't cover experiments.

But Brandy wouldn't take no for an answer. A tough, determined young woman who had managed to work part-time at a photo studio, baby-sit her boss's children, coach the high school football team and maintain a 3.2 grade point average between numerous and prolonged bouts in the hospital, Brandy wasn't about to give up her life without a fight. She sued the state of Oregon, charging that it was making a flawed moral choice in refusing to save her life. Since then her caustic, articulate criticisms of the Oregon system have given a vivid sense of the obstacles any universal healthcare plan for the nation would face.

"They'll pay for an alcoholic to get a liver transplant because they've been drinking all their life," she says, sitting with her mother at a rickety picnic table under a cherry tree by her front door. "They'll pay for a heroin addict to get cured, to help someone kick the cigarette habit. Those are things people do to themselves. If you put it to a vote the people would say pay for some girl's operation instead of some alcoholic's liver transplant or some crack head's needles. I just think it isn't very fair."

Conservative businessman Mark Hemstreet was at dinner last month with David Rogoway, a Portland jeweler, when he heard about how Brandy was being -- as he put it -- "screwed by the state of Oregon." An imperious 50-year-old businessman who has described his preferred government type as "benevolent monarchy," Hemstreet admitted that he knew next to nothing about Oregon's health plan. But the state's indifference to the fate of a poor, hardworking girl got him fired up in an old-fashioned way.

"He got so upset he couldn't eat," says Rogoway, who serves as Hemstreet's informal liaison with the news media.

The next day Hemstreet fired off a fax to the health plan offering to pay for one of the organs Brandy needed, reasoning that the plan would pay for the other. "They didn't bite," Rogoway says, so Hemstreet guaranteed the entire operation.

In the wake of local media coverage, most observers praised Hemstreet's gesture. Those applauding included Gov. John Kitzhaber, the former emergency room doctor who designed the health plan while heading the state Senate in the 1980s. A few others noted the irony that Hemstreet, who owns the Shilo Inn motel chain and is said to be worth $500 million, was critiquing a cash-strapped healthcare system whose gaps were a direct result of a tax-cutting referendum agenda on Oregon's ballots in recent years -- an agenda that Hemstreet had himself helped to bankroll.

"I doubt that Hemstreet made the connection," says Susan Tolle, director of the Center for Ethics in Health Care at the Oregon Health Sciences University, "but when tax initiatives reduce the tax base it reduces the pool of money for the health plan. The number of Brandys who need rescue go up."

Sitting with Brandy and her soft-spoken mother, it's hard not to see Hemstreet's offer as one of simple philanthropy. Karen, Brandy's mother, shows photographs of Brandy before her illness overtook her body. She was pretty with flowing blonde hair and apple cheeks. Today she wears dark glasses to hide her discolored eyes. Her abdomen is swollen as a result of advanced liver disease. Cutoff shorts reveal spindly legs.

Brandy describes how Hemstreet's call came during a two-month stretch in which she was rarely able to finish a meal -- an especially nasty twist of fate for a girl who dreams of becoming a professional chef by attending the Culinary Institute of America in New York, and afterwards, the Cordon Bleu in Paris. Between bouts of vomiting, she says, she felt grateful even as she continued to feel betrayed by bureaucrats.

"They pay for the drugs that rip down my body," she says, adding that she plans on forging ahead with the lawsuit despite Hemstreet's offer. "But they won't pay for the operation that could save my life. There's all this great technology and no way to pay for it. If the Oregon Health Plan isn't taking care of low-income families, then it's worthless."

But Brandy had the mixed blessing to be born in a state where the contradictions and complexities of the healthcare system are laid open for all to see. Thousands of patients around the country have died or suffered after being turned down for treatment, and millions of others get no healthcare at all. Their stories rarely reach the national airwaves, however, because the way they are being denied care is not so dramatic, nor so overt.

Oregon's unique plan makes it especially vulnerable to humiliating cases like Brandy's, even while it has been a remarkable success. Unlike other states, which limit who qualifies for Medicaid based on a combination of income level, family structure and other factors, the Oregon Health Plan insures nearly anyone who falls below the federally established poverty line.

Since its creation in 1994, the plan has enabled Oregon to swim against the tide of faltering healthcare protection. While the national uninsured population was swelling from 35 million to 43 million, Oregon was providing health insurance to an additional 130,000 people. The uninsured fell from 17 percent to 11 percent of the state's population -- compared to a national rate of 16 percent. Oregon offered a model of what nearly universal healthcare could be like -- though a flawed model, to be sure.

When the health plan started, officials drew up a list of 743 procedures and agreed to pay for the ones above a cutoff line set in the state budget every two years. In 1998, the line was at 574. Number 578 -- sexual dysfunction, i.e. Viagra -- was not covered. Nor was 591 -- smoker's cough. Nor were infertility treatments or tonsillectomies.

Although her doctors said Brandy couldn't live without it, it's hard to argue with the state's rationale for refusing the rare lung-liver transplant.

"It sounds very hard-hearted to say this about Brandy, but procedures like this shouldn't be funded by the Oregon Health Plan," adds Tolle. "The OHP doesn't chase hopes and dreams. It follows science. If the science shows the clear benefit of a procedure, it's funded. If the data isn't there, it isn't. And instead the Oregon Health Plan will use the money to make sure a greater number gets immunized, well-pregnancy visits -- the basic package."

The $250,000 required for Brandy's operations would provide 1,000 kids with full immunization regimens. And yet.

Dr. Mark Splaingard, who heads the cystic fibrosis clinic at Children's Hospital in Milwaukee, had an 18-year-old patient who got the double transplant in 1995. The patient, whom Splaingard identifies only as Andy, is doing reasonably well five years later although he's had many complications, including tuberculosis contracted from the diseased lung of the donor.

"Every transplant is like a novel," says Splaingard. "But the bottom line is, it's doable and there have been some successful cases."

But doable doesn't in Brandy's case mean probable or even likely. On July 17, Hemstreet's private jet will scoop Brandy up from the McMinnville airport and fly her down to Stanford Medical Center in Palo Alto, Calif., for an evaluation to see whether she qualifies to get on what promises to be a long waiting list.

Despite her capitalist prince, Brandy's chances remain slim. Stanford has never actually carried out a lung-liver transplant. It has accepted three previous patients for the operation, but all died waiting for the organs. Nationwide, more than 60,000 people are currently on waiting lists for organs. About 5,000 are donated each year, and about that many patients die waiting. Well aware of such sobering statistics, Brandy is measuring her hope against her pragmatism.

With that, Brandy takes out the keys to her car and drives off to her job at a photo studio in McMinneville, leaving her mother at the picnic table.

"I'm just hoping they'll come in time," Karen Stroeder says as she watches her daughter drive off. "Because I know the time's limited."