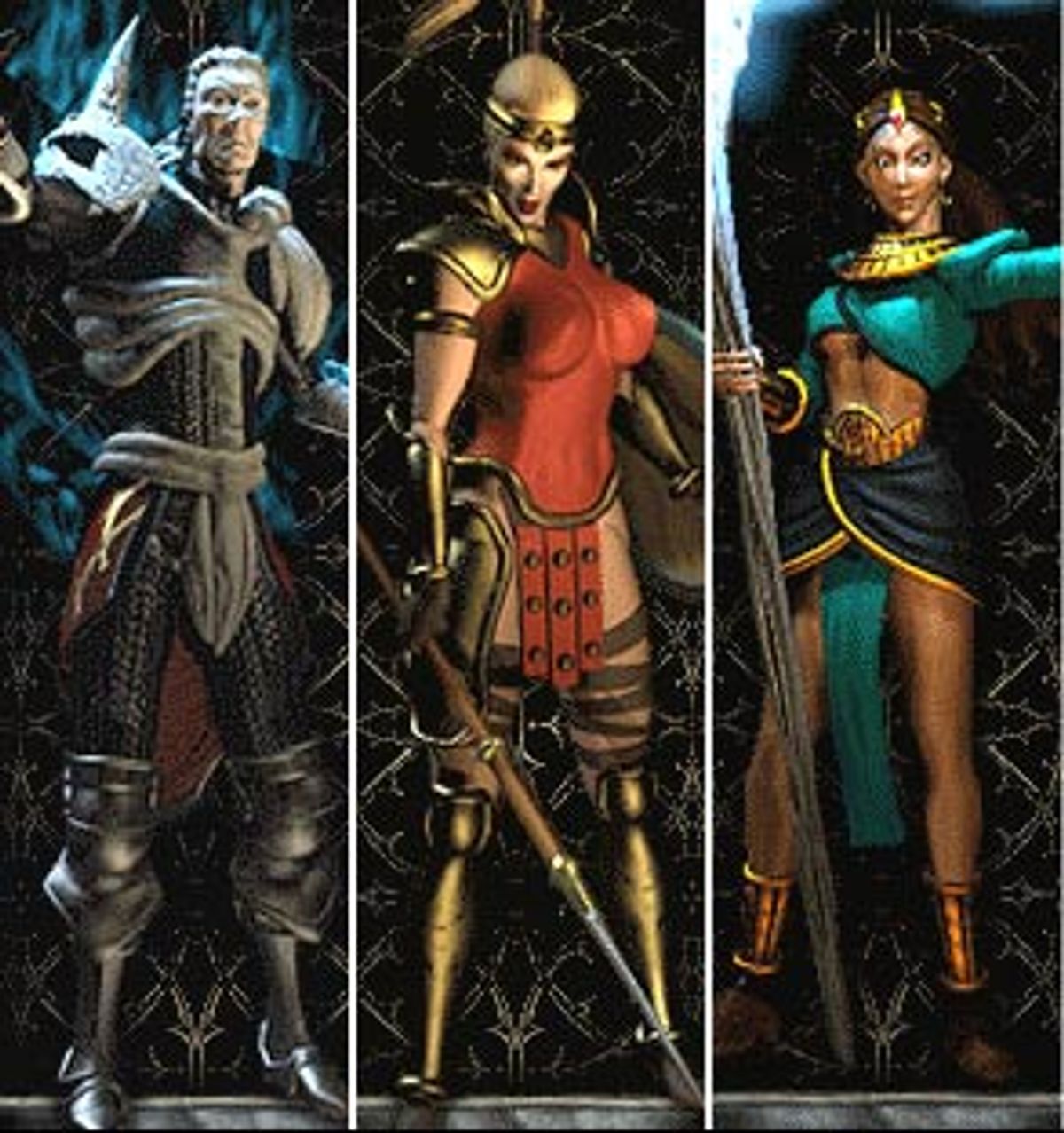 Some dilemmas catch you unawares. While half the multiplayer gaming world cursed in frustration as Diablo II's online servers repeatedly crashed over the Fourth of July weekend, I was debating a potential fashion faux pas. Did the "Tangerine Chain Boots of Remedy" worn by Bug, my scythe-wielding Barbarian, clash with the "Burgundy Light Belt of the Ox" I was tempted to buy?

Yep -- it's the online gaming secret that dare not speak its name. Diablo II, despite its meticulously rendered dungeons and groovaliciously vile undead, isn't aimed solely at gore-meisters obsessed with the efficient annihilation of Hell-spawn. This state-of-the-art offering from Blizzard -- one of the best game design studios in the business -- is really a cleverly camouflaged forum for clothes shopping and runway stuff strutting. I mean, come on -- when you finally get your hands on the Arctic furs that complete your Arctic-wear ensemble, dealing death and destruction to that bitch-demon Andariel becomes kind of an afterthought.

No wonder Barbie Fashion Designer rocked the gaming world way back in 1996. Dressing up is fun! Even in the original Diablo, a lot of the excitement came from choosing imaginatively and artistically designed war-gaming gear that you could either purchase or find deep within the dungeons -- helmets, full-body armor, weapons that both looked good and had magical properties. Diablo II raises the ante. Never before has an online game offered such a lovely panoply of ready-to-wear battle accessories.

But one does wonder: Do those in a world full of would-be Necromancers, Paladins and Barbarians -- some of whom display a tad more testosterone than is normally considered acceptable in your finer fashion boutiques -- understand that they are plunking down their hard-earned dollars for a chance to hang out at a department store? Let's not even begin to get into the cross-dressing issues associated with gender-bending Amazon and Sorceress role players who are certain that the "Rugged Amulet of Excellence" makes a perfect complement to the "Glimmering Chain Mail of Amelioration."

Clothing retailers and fashion mavens everywhere should take note. Gamers are all too often stigmatized as antisocial, trigger-happy teenagers unhealthily enraptured with murder and mayhem. But if Diablo II's popularity is any guide, the gaming population may also represent a hitherto-untapped market for purses, cowboy boots and opera gloves -- provided these items come adorned with the proper gothic/get-medieval-on-your-ass embroidery.

Blizzard Studios' original Diablo, released in late 1996, was a compelling Tolkienesque evocation of Dungeons & Dragons-style fantasy role-playing that helped online multiplayer gaming come of age. The second offering in an impressive string of Blizzard hits that included the real-time strategy games Warcraft and Starcraft, Diablo made online gaming easy and fun. As a result, Diablo II, long delayed from its supposed 1998 rollout, has been as hotly anticipated by the game-playing public as any new release this side of Quake II.

First-day-sales reports and the huge rush to play the game online -- which Blizzard's Internet-accessible network Battle.net was woefully unprepared to cope with -- suggest that Diablo II is a worthy successor. Without a doubt, it is the hottest game happening in cyberspace at the moment. One gamer noted that the number of players logged in to Everquest servers seemed to have dropped significantly since Diablo first appeared in stores at the end of June.

Such a drop may be temporary. There are few gaming breakthroughs in Diablo II -- the genre is not being revolutionized. Diablo II still doesn't display the kind of in-game narrative creativity that would truly capture the open-ended Dungeons & Dragons feel. And while the nonplayer characters built into the game aren't quite as brain-dead as their counterparts in the first Diablo, they also aren't exactly what one might call paragons of artificial intelligence.

But few gamers seem to care. Diablo II is everything Diablo I was, and more. There are more quests, monsters, dungeons, skills and spells. And best of all, more accouterments!

The original Diablo offered your warrior of choice a vast array of potential weaponry, armor and jewelry. You could either obtain these items as a reward for disemboweling a Balrog or the like or purchase them at a store in town. Helmets, shields, plate mail -- not only did they look fabulous as you tried them on in the special "inventory" interface window, but they also sounded cool. I know I won't soon forget the thrill that coursed through my body the first time I heard the resonant clang that accompanied a beautiful (and expensive) coat of "Splint-Mail" armor. And to cap it all off, a change in armor changed how you looked as you played the game in real time. Fantasy never looked so good.

Diablo II has more items in every category and more categories of items. The choices are so multifarious as to be positively bewildering. In addition to the old standbys of armor and helmets, now you need to find the right gloves, boots and belts as well. You can also festoon selected items with emeralds, rubies and other fine gems -- a jewelry-loving berserker's delight. And not only are there more doodads to buy and trade and find, there are even more retail outlets at which to purchase these commodities, which range in price from a paltry 100 pieces of gold to a whopping 100,000 pieces or more.

But all of the dithering and dallying involved in choosing what to wear ends up burning through quite a bit of time. Playing online over the weekend, I ran into a few bloodthirsty combatants who expressed rather strongly worded sentiments of impatience when their comrades in arms spent too long window-shopping before setting out in search of death and glory. But I could only empathize with the careful shoppers, for I too was lost in a cloud of consumer doubt. Should I wear the furs because they make Bug an unexpectedly ravishing giant thug, or should I be more pragmatic and put on the "Azure Heavy Boots of Pacing" for extra nimbleness?

After reviewing my game-playing priorities, I realized I was devoting almost as many minutes to comparison shopping as I was to killing Diablo's minions. And I was becoming increasingly frustrated with the poor performance of the Battle.net servers. Not because I wanted to kill, kill, kill, but because I still hadn't gotten all my accessories in order. It was as if the freeway to the mall had been closed!

Still, I have no doubt that hardcore gamers will dispute my assertion that Diablo II is a fashion show run amok. Who cares whether the boots are bright orange or sky blue -- they will roar. The only thing true warriors worry about is how much the footwear boosts one's Strength or Dexterity experience points, or whether a 30 percent increase in poison resistance is better than a 25 percent boost in the ability to fend off freezing temperatures.

They may have a point. I will concede that there are times when practical considerations trump fashion concerns. No matter how much I liked the way my "Bone Shield" highlighted my "Beryl Heavy Gloves of the Fox," for example, I have encountered some rather nasty monsters whose dispatching required swinging a two-handed battle-ax while wearing fireball-neutralizing gauntlets. And as I always say, it's best to dress for the situation, and not for the mirror, if you want to live to fight demons another day.

But take a hard look at Battle.net. Note that at the bottom of the screen at which players can create or join Diablo II games, an online, real-time pictorial representation of all the players currently logged in scrolls from left to right. Half-naked Amazons dressed only in leather vie for attention with Necromancers who are jingling with chain-mail everything -- boots, gloves, armor. In this parade, looking good is what it's all about.