The leader of my pack was gay

Which was a good thing, because I was too. And in our small town, my scoutmaster was the only happy, normal model of gay manhood I had. 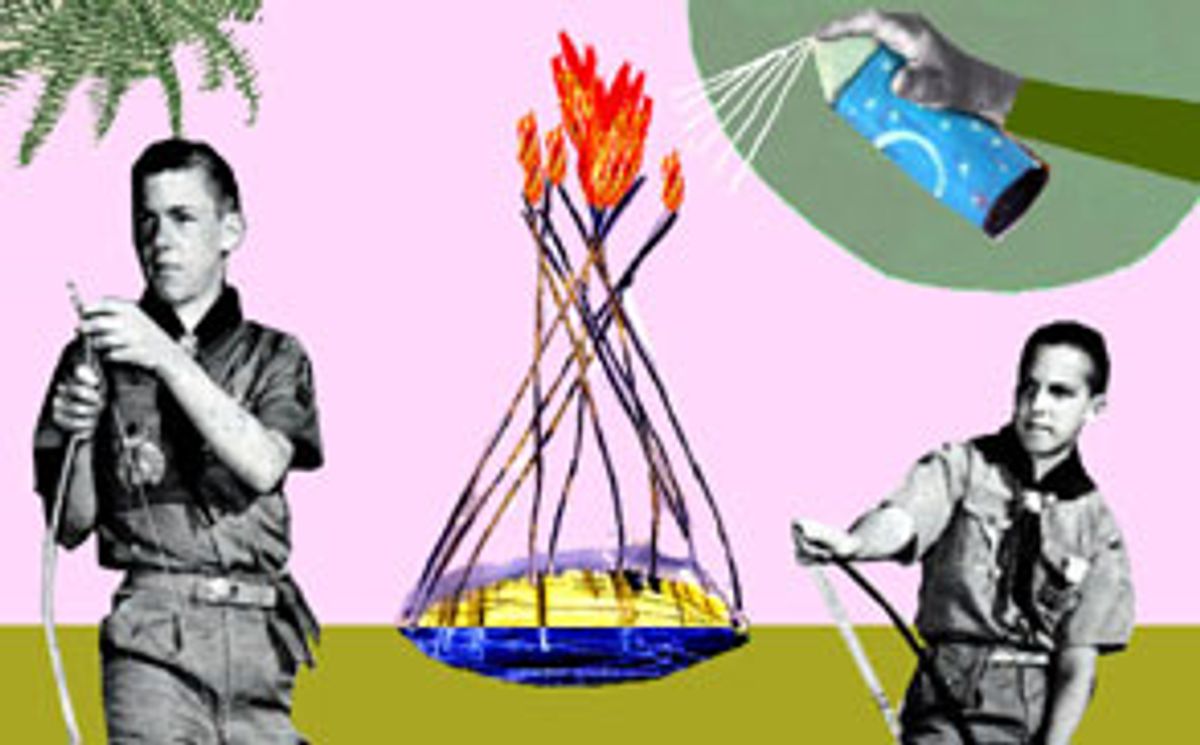 Over a series of summers when I was a young teenager, my twin brother and I went to Camp Alamuche in northern New Jersey for two weeks of Boy Scout camp. Alamuche gave us the chance to stockpile merit badges, and attendance was mandatory if you had any ambition to achieve Eagle Scout, the top rank in scouting and the pinnacle of boyhood achievement.

My brother and I were in different troops. In my ragtag Troop 29, we all knew that Mr. Wheeler, our bearded, goofy scoutmaster, was gay. Looking back now, I'm not exactly sure how we knew. Perhaps it was because he was in his 50s, was unmarried and still lived with his mother in a big Victorian house in our hometown. It was rumored that he had entered a Scout's tent at night and looked at him while he slept. But we treated his sexuality, or what we knew of it, as an open secret. And nobody ever called him "gay," "queer" or "faggot."

In fact, if anything we had a tender appreciation for him. He was incredibly eager to teach, but he stood slightly outside the culture of aggressive masculinity that dominated the camp. (All of us gawky, welterweight kids in Troop 29 stood with him.) The archery, whittling and orienteering were left to other scoutmasters. When we would trek off from our camp in the morning, Mr. Wheeler stayed behind and welcomed us back at dusk. We would sit in a circle, and he would instruct us to pile sticks into the shape of a tepee to build a fire, light it with hairspray and a cigarette lighter and seal corn and potatoes in tinfoil and cook them in the center of the flames.

I think of Mr. Wheeler now that the Supreme Court has decided to uphold the right of the Boy Scouts of America to ban gay Scouts, who, they claim, pose a threat to their "expressive message." Of course, the Boy Scouts' message is crammed with all kinds of ideology about God, country and the nature of real manhood. As a bookish atheist raised by a single mom, I felt particularly foreign in the Scouts. There were no merit badges for poetry or short-story writing, no role that my mother could play in our weekend excursions. Every troop meeting began with the recitation of the Scout Oath. I would begin with the others, "On my honor, I will do my best," fall silent at "to do my duty to God" and then continue to the end.

But Mr. Wheeler understood that even misfits need to fit in someplace. At camp, when one kid holed up in his pup tent glued to sports on his Watchman, Mr. Wheeler let him. He knew what it meant to be starved for something: television, say, or company.

This newest victory for the Boy Scouts will undoubtedly set off an inquisition against men like Mr. Wheeler. Gay scoutmasters, like gay teachers, were once tolerated as long as their sexuality was kept as remote from the daily workings of Boy Scouts as girls are. But scoutmasters are first and foremost Scouts themselves, and an organization that bans gay boys from membership will certainly not tolerate gay men as leaders. No doubt many older, closeted gay scoutmasters -- even those who are suspected of being gay -- will be scared into total silence or driven out. And when that happens, they will be pushed further into the shadows of their communities, told that they should have no interaction with kids.

The irony of the ruling is that most Boy Scouts, at least as far as I remember, don't yet know their own sexual preference -- and as soon as they do, they're gone from scouting. Troop 29 was defined by its members' arrested development. We talked about "gooey farts" and the possible outcomes of a battle between Jason Voorhees and Freddie Krueger. When we did hit puberty, we realized that being a Boy Scout was about as cool as being in a marching band. What teenage boy wants to sacrifice his weekend nights to eat s'mores with a crew of other earnest young boys? The Boy Scouts offers boys sanctuary in the form of an imaginary childhood in an imaginary wilderness, where maturity gets meted out by merit badges and every compass has one true north.

I remember visiting Mr. Wheeler one afternoon at his house. He needed to certify the newest merit badges that I had earned at camp, and I sat next to him on his couch while he examined my paperwork. (For an organization about the outdoors, the Scouts could be surprisingly bureaucratic.) I can remember thinking at the time that that was the first time I had been in the company of an older man who sincerely cared about my progress in life. In very real ways, I spent more quality time with Mr. Wheeler camping and night hiking through birch forests than I did with my own dad.

When I was a teenager confused about my sexuality, Mr. Wheeler was the only model I had for what it meant to be gay. Scouting's core membership is in small towns and suburbia, places where young boys are unlikely to be exposed to gay male culture. The Supreme Court ruling means that there will be one fewer place to encounter normal, adult homosexuals woven into the world that they share.

Mr. Wheeler passed away a few years ago from a heart attack. When I mentioned this to another former Scout from my town, the first thing he brought up was Mr. Wheeler's homosexuality. "He drove me home once," my friend said, as if an act of generosity by a gay man were enough to suspect him of prurience. Straight, married scoutmasters entered our tents unbidden all the time: to make sure we were in bed by curfew, to examine our beds for the proper fold of the sheets or to confiscate our Watchmans. But when Mr. Wheeler crossed the threshold of that half-remembered, half-invented tent, he became dangerous and illicit. His suspected motives crossed the threshold with him.

My twin brother made it to Eagle. He even moved rocks for a weekend in absolute silence to join the secretive Order of the Arrow, a Mason-like cabal within the Boy Scouts. Fortunately for the Scouts, he is straight, and is planning to get married this fall. I, meanwhile, sleep with men. I dropped out of the Scouts right around the time Mr. Wheeler was replaced by the gruff, chain-smoking dad of one of the other boys in Troop 29. I can't remember my exact rank when I left. But I think it was Second Class.