President-elect Vicente Fox, a tough-talking cowboy and former head of Coca-Cola Mexico, promises to revolutionize the nation's economy after 71 years of corruption. 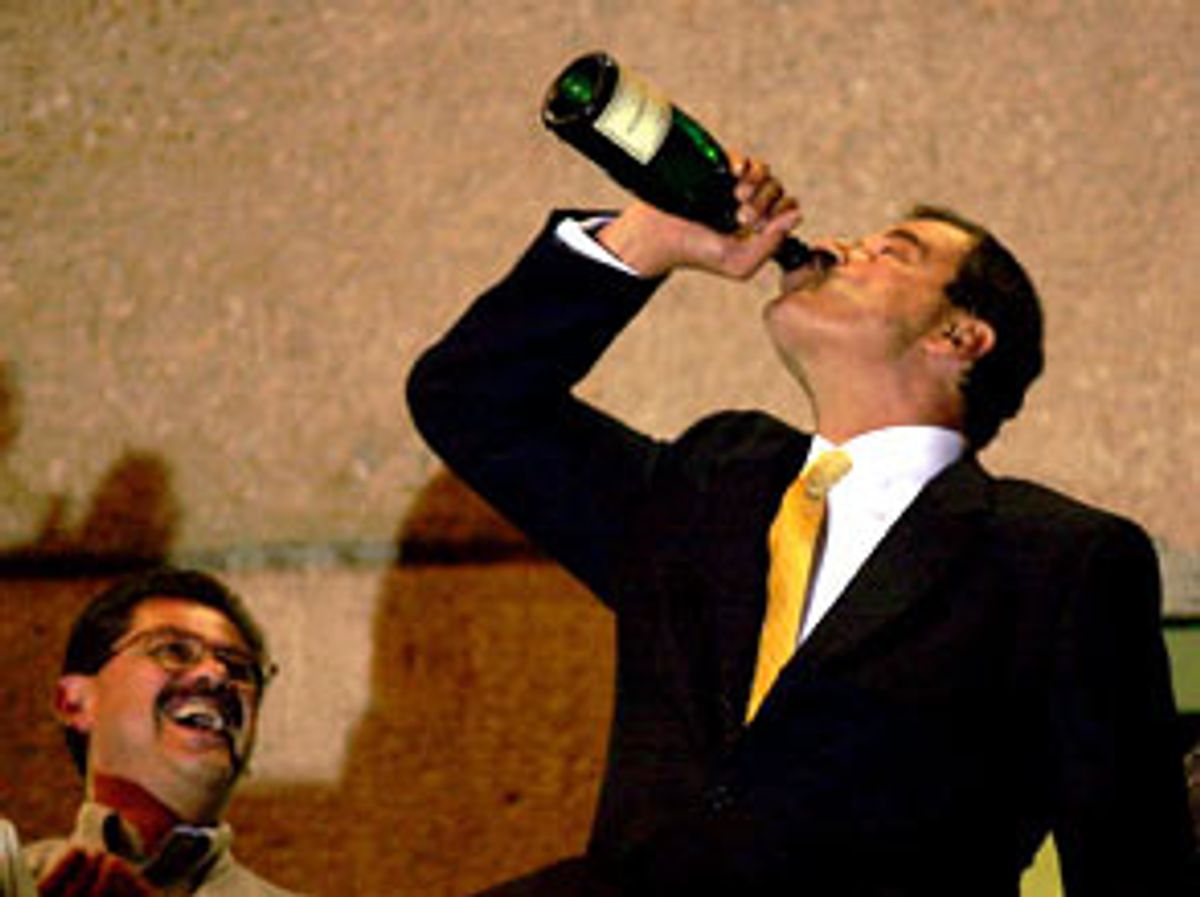 In 1995, Vicente Fox, then governor of the Mexican state of Guanajuato, told an American reporter that he would be the Neil Armstrong of Mexican politics -- the first opposition candidate to set foot in the country's presidential palace, Los Pinos. Five years later, Fox managed to boot out the world's longest-ruling party on his way in, in what analysts are calling the most significant event in Mexico since the revolution.

Like Armstrong, this former Coca-Cola executive and sharp-talking cowboy has opened up a new world to his people -- one as different from business-as-usual Mexican politics as the Moon is from Earth.

Unlike most Mexican career politicians, Fox is a businessman, and he's bringing a managerial style to office with him. So far, he has pledged to rule with a plural government, taking the best and brightest from all parties, rather than handing out Cabinet posts to buddies. In fact, Fox announced Tuesday that he was hiring five headhunting firms to track down worthy Cabinet members.

Fox got his start as a Coca-Cola delivery man and worked his way up to the head of Coca-Cola de Mexico. After a term in Congress, he ran for governor of his home state of Guanajuato, and lost, but ran again in 1995 and won.

Ever persistent, Fox began campaigning for the presidency three years ago, effectively imposing his candidacy on the PAN, a conservative, pro-business party. Traveling the country in his signature cowboy boots and "Fox" belt buckle, he vowed to help poor and indigenous people, to double education spending and to try to open up the U.S.-Mexico border to a free flow of workers.

His rough-and-tumble language and down-home style, while endearing him to suburban voters, ruffled the feathers of the more straitlaced conservatives. Fox threw especially sharp elbows at the Institutional Revolutionary Party (PRI). During the campaign, Fox called PRI candidate Francisco Labastida Ochoa everything from "shorty" to "cross-dresser," cementing his own image as the biting outsider.

But while Fox's edginess and business background attracted him to young, educated, urban voters, the preelection polls didn't foresee the large number of undecided voters and supporters of other opposition candidates who at the last minute threw their votes to the one man who had a chance to beat the PRI.

"Fox has the authority to process change and the charisma to capitalize on it," says John Bruton, executive vice president of the American Chamber of Commerce of Mexico.

The PAN not only took the presidency but won a majority in Congress, meaning that the change Fox represents will meet little political friction.

Fox's landslide win last Sunday came not only as a crushing blow to the PRI's 71-year rule, but as a complete surprise. Fox won 43 percent of the vote to Labastida's 36 percent. Although Fox and Labastida had been running neck-and-neck in polls in the weeks leading up to the July 2 election, political pundits never predicted a decisive Fox victory. Reports of vote-buying and pressure by the ruling party prior to the election left little hope that the PRI would let go of power.

But suspense began to build as exit polls rolled in Sunday evening showing Fox with a clear lead. Mexicans sat glued to their TV sets in disbelief and excitement, watching Fox do what no man had done before: defeat the PRI for the presidency. When President Ernesto Zedillo appeared on television at 11 that night, congratulating Fox on his victory and vowing to work with him to ensure a smooth government transition, Mexicans knew that something monumental in their country had changed -- they had truly achieved democracy.

Upon hearing Zedillo's concession, thousands of Fox supporters in the capital rushed to the monument of the Angel of Independence to celebrate their triumph and listen to a speech from their new president-elect.

"Don't fail us!" the crowd screamed to Fox, while waving his signature "V" for victory sign in the air, which also signifies his campaign slogan "Ya!" -- "enough already."

Mexico has now shown the world that it is capable of executing clean and transparent elections. Ironically, most of the credit for that feat belongs to outgoing President Zedillo, of the PRI, whose reforms have effectively brought about the demise of his own party.

Most analysts and international observers agree that Mexico's leap toward democracy could not have happened without Zedillo. By pushing through crucial reforms in 1996, he created the Federal Electoral Institute (IFE), an independent body to manage the elections. In the past, elections had always been run by the government, muddying the transparency and accountability of the process.

This time, IFE carefully prepared voting credentials, redesigned voting booths to ensure secrecy and invited scores of international observers, including former U.S. President Jimmy Carter, to oversee the process. Official, reliable election results were available just hours after the polls closed -- a far cry from vote-tabulating problems of the past, exemplified by the 1988 election debacle where computers crashed with opposition candidate Cuauhtimoc Cardenas in the lead, only to be recovered with PRI candidate Carlos Salinas ahead.

Zedillo was moving toward a separation between the PRI and the government. Now that separation is complete, "The most important thing is that irreversible change has happened," says Bruton. "There is no longer a confusion between party and state."

For international investors this means that there is a good chance to further broaden Mexico's economic opening. For example, while Zedillo made huge strides during his administration by penning free-trade deals with countries around the globe, many investors were too scared off by Mexican tradition and national pride to even dream about getting their hands on Mexico's lucrative oil and energy market. Under Fox, however, this could change.

Although Fox has recently said that he has no plans to privatize state-owned oil monopoly Petrsleos Mexicanos (Pemex), he hinted at a further opening of the energy sector -- specifically electricity -- during early campaigning.

In fact, Fox's position as a business-minded outsider has investors in all sectors rubbing their hands together in anticipation of more open, fair and regulated markets.

"His pragmatism will be new, a definite outside view from which to form an agenda," Bruton says. "Mexico as a result will be a more understandable entity; before, things were done under shrouds and mystery." The straight-shooter is also predicted to have a strong effect on Mexico-U.S. relations.

"Fox will positively affect U.S.-Mexico relations because he is willing to go further, to push past the limits of Mexico's borders", says Estudillo.

"Fox's win not only represents a new regime, but more democracy than the country has ever seen before," says Mexican political analyst Josi Antonio Crespa. Indeed, reactions to Fox's unexpected triumph and the country's embrace of democracy have been exceedingly positive. The Mexican stock exchange rocketed 6.1 percent Monday while the peso strengthened 26.7 centavos against the U.S. dollar. President Clinton, Fidel Castro and a handful of other world leaders clamored to congratulate the new president-elect.

International analysts are also hoping that ambitious economic changes that were skirted by PRI tradition can also move forward. Famed Massachusetts Institute of Technology economist Rudiger Dornbusch, the only person to publicly predict the 1994 peso crash, came out Wednesday calling for a currency board, or even dollarization, to accompany Fox's takeover of the presidency, a goal he has been pushing for years without success.

While opposition supporters celebrate, the PRI is experiencing an internal meltdown. Shortly after Zedillo's graceful concession to Fox's win, the lame-duck president came under fire from hard-line members his own party, blaming him in part for the defeat.

Zedillo's democratic reforms led to the party's downfall, they reasoned. Also feeling the heat, PRI President Dulce Marma Sauri handed in her resignation. It was refused by the national PRI council, however, while Zedillo's choice for a replacement was also rejected. An internal power struggle between old-school PRI members, who are fighting to grab the helm of the sinking party ship, and Zedillo's technocrats, has left the party in limbo.

"The president can't rule the party for one minute more," Manuel Bartlett, who as interior secretary presided over the dubious 1988 elections, told the national PRI council Tuesday.

But while the PRI's internal struggle rages on, Zedillo's optimistic reforms and his refusal to bow to party hard-liners are likely to live on in his political legacy.

Until last Sunday, the line between Mexico and the PRI -- which identifies itself as a party with the red, white and green of the Mexican flag -- was so blurred that the ruling party's problems became the country's calling card.

"Fox shows Mexico should be seen as the ambitious, potentially powerful partner," Bruton says. "It will no longer be Mexico the victim."