The musical is twice as expensive as the movie, and the cast has been relocated to Buffalo. Can "The Full Monty" still shake its stuff onstage? 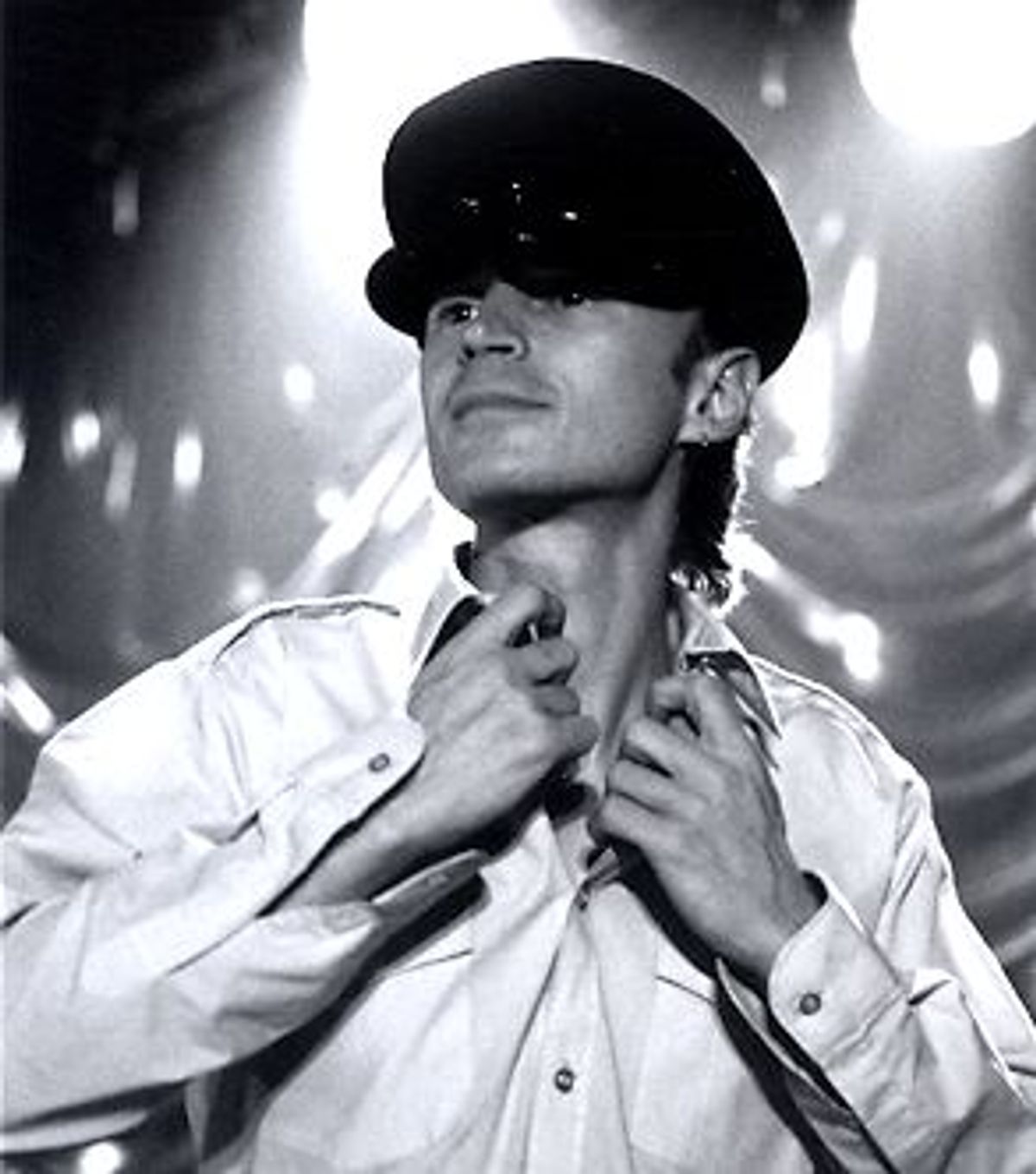 "The Full Monty" is coming to Broadway. The surprise 1997 hit about a sextet of unemployed English steelworkers who trade their clothes for cash, will reemerge on Oct. 26 as a full-blown musical comedy.

Judging by the enthusiastic applause that greeted the out-of-town preview, which closed Sunday at San Diego's Old Globe Playhouse, "Monty" appears on track to conquer Manhattan. The New York Times' Bruce Weber, after making the trek to the other coast, declared it "a crowd-pleaser." And Broadway.com columnist Ken Mandelbaum predicts, "'Monty' will be arriving in New York with the look of a hit, and could just be unstoppable, no matter what anyone writes about it in October."

If the prognosticators are correct, "Monty's" newest incarnation will add another chapter to an ongoing Cinderella story. The first installment began when the movie was unveiled at the '97 Sundance Film Festival. The little $3.5 million project, funded by 20th Century Fox's Searchlight Pictures, took audiences by surprise and stunned the industry, raking in $46 million at the box office in this country and a whopping $198 million abroad. "Monty" would go on to garner four Academy Award nominations -- including one for best picture -- and nab an Oscar for Anne Dudley's comedy score. No sooner had the movie opened, reports Lindsay Law, then president of Searchlight, than "we got an extraordinary number of requests, probably 45-60 of them, from theatrical producers around the world wanting to turn it into a stage show. That turned my head to looking at it as a full-fledged musical, and we began exploring the idea."

Hit movies don't necessarily make boffo Broadway, though -- a painful lesson that Fox itself learned when a thudding "musicalization" of its hit 1988 Tom Hanks comedy, "Big," opened in '96 and promptly disappeared after only 22 previews and 192 performances. Andrew Lloyd Weber's '94 version of "Sunset Boulevard" lasted just two and a half years -- a minor run for the "Cats" man. "Footloose," a wan, carbon-copy version of the '84 Kevin Bacon flick, just closed after 737 performances -- though audiences nationwide won't be spared an upcoming national tour. An equally panned stage mounting of "Saturday Night Fever," which opened last year at Broadway's Minskoff Theater, continues to hold its own, but John Travolta needn't worry that it will ever crowd out memories of the '77 classic on which it's based.

"There's nothing new in Broadway musicals adapting featherweight entertainment," observes Jack Verteil, creative director of Jujamcyn Theaters, which has booked "The Full Monty" for its Eugene O'Neill Theater. "Back in the '50s, shows like 'Damn Yankees' or 'The Pajama Game' were based on light novels. Today, those light novels are more likely to be TV shows or movies. Certainly, when you're working with a popular title like 'Saturday Night Fever,' it makes it easier to raise financing and book tours, often sight unseen. But it may also work negatively. 'Footloose' and 'Saturday Night' seem so recent that audiences can always go out and rent the video. They don't necessarily have to spend $80 to see them on Broadway."

Still, Broadway producers, eager to transfer a marquee brand name from the cineplex to the Great White Way, continue to force movie adaptations onto the stage: "The Witches of Eastwick," which began life as a 1984 John Updike novel before morphing into the problematic '87 Jack Nicholson feature, is currently having its kinks worked out in London. Marvin Hamlisch, composer of "A Chorus Line," is working on a stage version of the '57 classic "Sweet Smell of Success" -- John Lithgow will appear as fearsome gossip columnist J.J. Hunsecker in a workshop this fall -- and then plans to join forces with Woody Allen for a musicalization of "Bullets Over Broadway." Even a relative trifle like the 1967 flapper comedy "Thoroughly Modern Millie" is being brought to the stage.

But before those other projects move forward, perhaps they should take a few cues from Law, who has made a number of shrewd moves to ensure that the new "Monty" lives up to the original. First, he has refused to take in any producing partners -- a rarity these days, when most Broadway shows are top heavy with corporate investors.

"Normally, when a studio licenses a show to a Broadway producer, it loses control. But we didn't want to do anything that would damage the film's name," says Law. And so he took the lead in developing the show himself -- leaving Searchlight in January to work on it full time -- and Fox agreed to shoulder the costs, which are expected to reach $7 million, twice the movie's budget, by the time the show reaches Manhattan.

Second, Law forswore the easy "Saturday Night Fever" route of merely replicating the original's songs in the stage version. "Simply duplicating the movie didn't seem a very exciting choice," he says. "That just exploits the title, but to what end? You really need to give audiences something new and different or I don't think the stage version can be assured a long life of its own." With theater vets such as director Jack O'Brien (artistic director at the Old Globe, where he first mounted the '94 Broadway revival of "Damn Yankees") and playwright Terrence McNally (who wrote the adaptations for "Kiss of the Spider Woman" and "Ragtime") on board, the decision was made to transfer the lads in "The Full Monty" from unemployment lines in Sheffield, England, to Buffalo, N.Y.

But Law's riskiest decision was signing first-time Broadway composer David Yazbeck (whose previous credits range from "Late Night With David Letterman" to "Where in the World Is Carmen Sandiego?") to handle words and lyrics. "I remembered back to when I was in college and first saw [1968's] 'Promises, Promises,' with its music and lyrics by Burt Bacharach and Hal David," explains Law. "That was a new sound then, terrific and contemporary. It wasn't 'Climb Every Mountain.' A lot of people recommended David. He writes in quirky, different styles. He did a couple of songs on spec -- and that was it."

After too many years of stentorian sung-through musicals -- from "Les Miz" to "Jekyll & Hyde" -- Yazbeck's clever tunes are refreshingly unpretentious. (He even works casually dropped four-letter words into the lyrics.) The first-act curtain number "Michael Jordan's Ball" allows the struggling lads to discover their inner stripper as they mimic the basketball ace's moves on the court; the second act opens with a classic Broadway showstopper, "Jeanette's Blues," as veteran character actress Kathleen Freeman (who has racked up supporting parts in 124 features and 60 TV shows), playing the boys' piano player, belts out a lament for the bum showbiz acts she has seen in her time. Yazbeck's score even includes a mock love song a man sings to his oversize stomach.

With just a few exceptions -- like Andrew De Shields of "The Wiz" and "Ain't Misbehavin'" -- the "Monty" cast is made up of relative unknowns. But that hardly matters. The show's title is its star, and once a few needed nips and tucks are performed before the show takes the bow in New York, "Monty" should deliver the goods.

And exactly how full is this "Monty"? The stage cast goes further than their movie counterparts, revealing all in a final, full-frontal flash -- though, to be fair, some tricky stagecraft obscures the view. Even so, that certainly rates as one gimmick no movie-to-stage adaptation has yet attempted.

If nothing else, the new "Full Monty" may go down in history as the first musical in which the players deliberately lost their shirts.