Where, oh where, are the children who can mix a decent vodka gimlet? 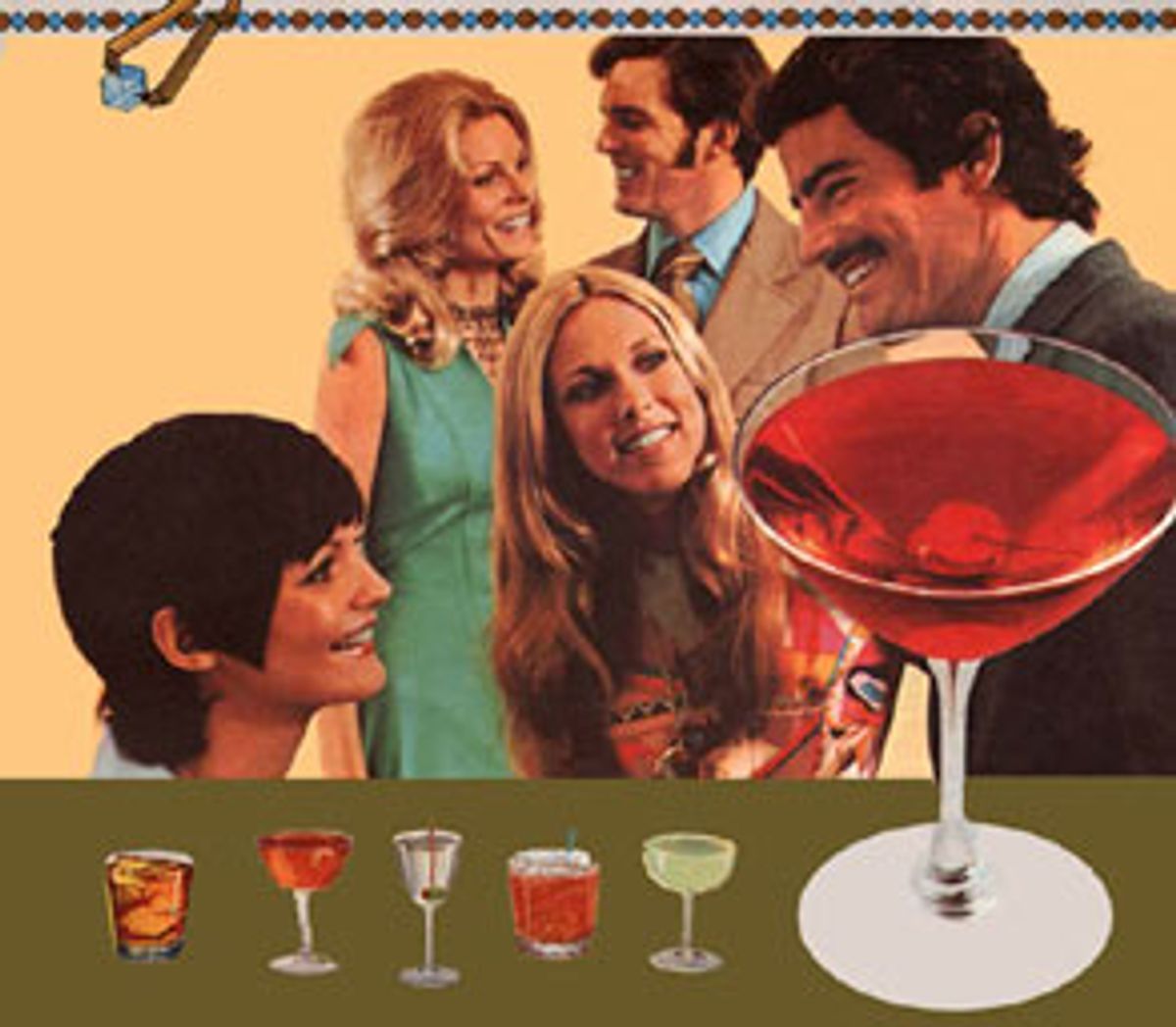 In my family, we had dinner at 8. Growing up, I labored under the somewhat romantic, and probably false, notion that this was civilized. Six o'clock dinners were for people who thought Sizzler was the place to go for a steak, tuna casseroles were haute cuisine and fruit salad was the stuff that came in small cans, sweetened by a syrupy sauce that never could quite mask the cold, metallic taste.

What did my own mother serve? There were meatloaves and steaks, and her prized fried chicken recipe. Nothing really spectacular. But by the time dinner rolled around at 8, whatever it was sure tasted great to a couple of hungry kids.

Why did we eat so late? My mother was an artist, or thought so for a while, and she would do anything possible to separate herself from the crowd she called "the cotton-dress mothers."

Needless to say, what my mother wore while she was cooking mattered more than anything she served. Her dresses were always short, often low-cut and usually worn with sexy black pumps (though I do recall a pair of lovely, pale pink, T-strapped heels).

For years I've been searching for a black pinstriped, white-collared crepe dress like the one my mother wore. While there was nothing businesslike about it, it did command a certain sort of wistful respect. And I recall with fondness a fetching yellow knit dress of my mother's that bubbled out a tiny bit and came back in, and was so, so short that some of the older kids asked me if my mother was a hippie. That was 1967. I'd been asked if she was a beatnik in '62.

She smoked, of course. Especially while she cooked. She also drank, white wine, and some mixed drink or another. At one time there was a flurry of frothy green and pink concoctions, following the arrival of a mustard-colored blender from the S&H green stamps store. But as making these drinks required getting out the blender, plugging it in and having all the ingredients on hand, that phase passed rather quickly.

My father continued to drink his scotch -- straight up, that was the rule. That was also the reason, I suspect, that we didn't eat dinner until 8. My parents were big believers in the cocktail hour.

The cocktail hour really took off during the heady Eisenhower years. Later, across our nation's suburbs and cities, men and women, too old to take part in the Vietnam War or the attendant protests, shouldered their growing responsibilities at home with a nightly bourbon and water. Men in ties and their eager wives, not yet in the workforce, showed up with their bottles of booze and bowls of powdered onion dip. They came for good, cheap fun -- the only kind available.

Think of rumaki and pink ladies, Sinatra and the Supremes and a beehive blond with thick eyeliner and a Kool cigarette, doing the twist. There was always a table for the liquor and an endless supply of 45s. More often than not, the kids got by with chips for dinner.

Sometimes the cocktail hour would stretch till almost dawn. The next morning we'd find a sea of empty bottles and the cat licking the remains of a chopped liver spread. Once I spent several hours walking a neighbor's tipsy toddler after he'd discovered the discarded drinks before his sleeping parents awoke.

While the popularity of cocktail parties had waned by the time Richard Nixon waved goodbye to the nation from a helicopter on the White House lawn, the fun was officially over when Jimmy Carter did away with the two-martini lunch.

Yet, from all appearances, cocktails are making a big comeback. Witness actress Sarah Jessica Parker and her gal pals on "Sex and the City" ponying up to some of New York's best bars to order their favorite drink -- a cosmopolitan, of course. Goodbye white wine; hello dear old-fashioned. Everywhere you look, people are enthusiastically ordering their parents' and grandparents' drinks. You'd think they'd just discovered booze.

But for all the popularity of hard liquor, invitations to cocktail parties remain scarce. I suspect it's the food. Or more specifically, fear of fixing food. Small food.

Appetizers exist for one reason: They allow your guests to drink without getting thoroughly plastered. Forget fancy, five-step recipes requiring any last-minute preparations that take you from your company. In the '60s, they knew how to keep it simple.

My father used to serve a cheese board with olives and Ritz crackers topped by little anchovies. He knew that salty food kept people drinking. And drinking kept people happy. Then everybody ran off to dance the 12-step, again and again.

If my parents drank too much, we didn't notice. The times were loud and boisterous, and we, the smallest witnesses, were along for the ride. People dropped in at all hours. They drank, and they laughed, and we laughed along with them. Outside there were assassinations, an unpopular war and burning cities. The world was changing fast. Maybe the cocktail-party crowd decided if they couldn't help, they would hide. But then everyone was young, even our parents.

Where, oh where, in this age of carpool coddling, are the children who can mix a decent vodka gimlet, cheerfully pass around trays of hors d'oeuvres and play chopsticks on the piano to a roomful of their parents' drunken friends?

Having reached the cusp of middle age, I am perhaps drunk myself on the nostalgia of my youth, blissfully recalling a sweet time that never was. Yet who hasn't stood, Cheever-esque, on the edge of a cocktail hour, believing before the first shy toast that life is good, as good, in fact, as it will ever get?

Jodi Greenbaum is a freelance writer.