From hate speech laws to the battle over Native American sports team names, a linguist shows why we're so worked up about the power of words. 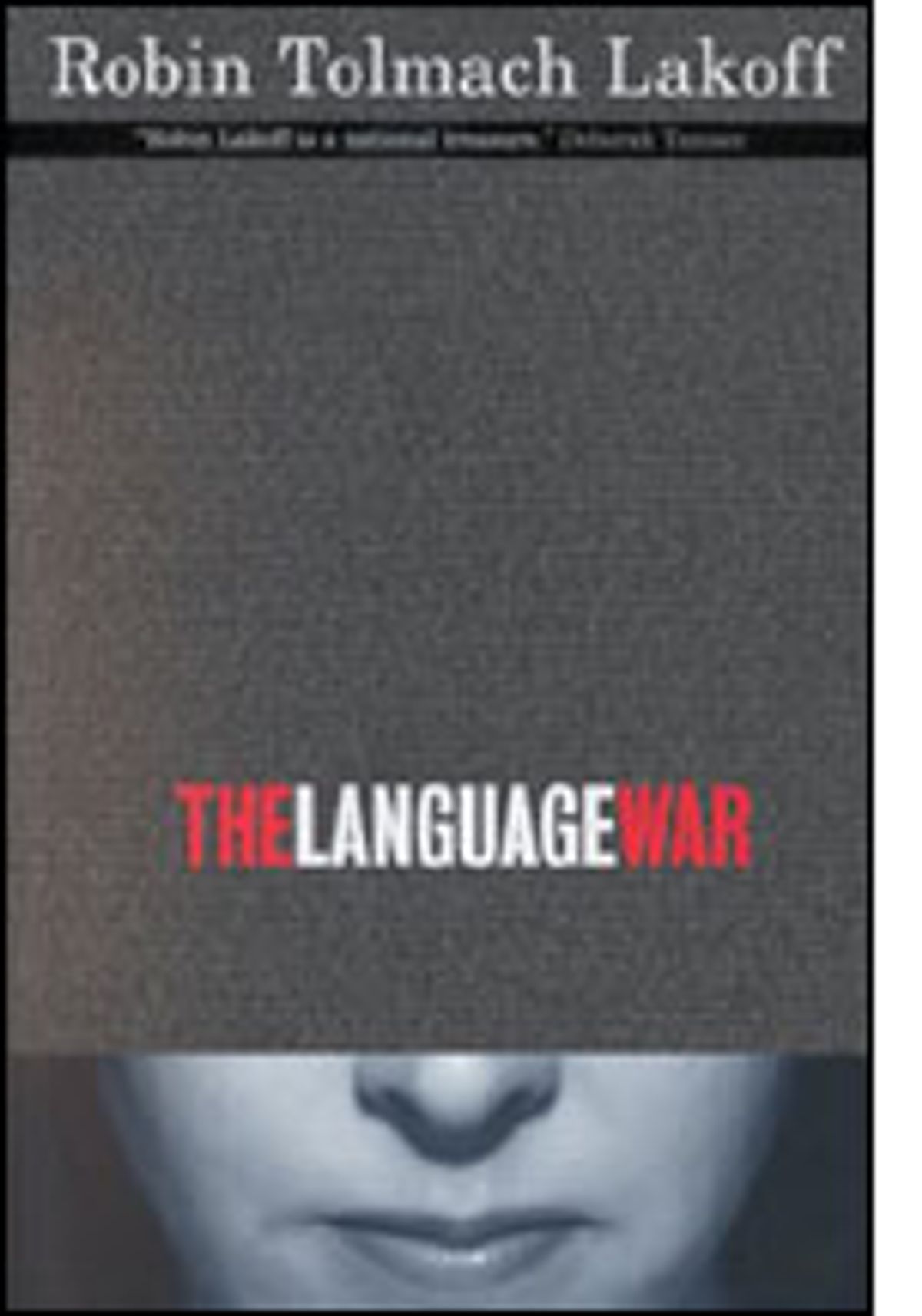 "Political correctness" and hate speech; Anita Hill-Clarence Thomas; speculation about the "real" Hillary Clinton; the O.J. Simpson trial; ebonics; and the Clinton-Lewinsky-Starr scandal: These national soap operas all pass Robin Tolmach Lakoff's "Undue Attention Test," but it's not because Americans are shallow and prurient. Rather, Lakoff says in "The Language War," we studied these stories for clues about our "insoluble difficulties with race and gender."

Lakoff is a professor of linguistics whose comparison of men's and women's speech patterns was popularized in Deborah Tannen's bestseller "You Just Don't Understand." In "The Language War," Lakoff takes it to the people herself, writing more as a lefty pundit and media critic than a linguist. She argues that both minorities and women are battling the white men in power for "control of the narrative" and of language itself. The stories that pass the Undue Attention Test, she says, all involved a struggle over "which group ... gets to make meaning for us all -- to create and define our culture."

The evidence Lakoff presents that the battle for cultural control is a contest over language is rarely real-world turf lost or gained. Instead, she points to the defensive posturing by defenders of the status quo, uncovering the fear of a black, female, gay planet embedded in conservative rhetoric. But Lakoff herself falls into the the same "gotcha" tone that she decries in what's been called the "Argument Culture," the increasingly mean, contentious public discourse born of the language war. For example, she opens her skillful debunking of a George Will column with this: "A thorough analysis of the sophistries of Will's argument would take us beyond the millennium." Then she disses him for "sneering."

Lakoff's best in her own field: Linguistics offers a fresh take on some played-out stories and reanimates those middle-aged warriors feminism and the fight against racism. Even sympathetic listeners tune out overused terms like "patriarchy" and "the Other." Lakoff's use of linguistic terminology and concepts revives the old struggles for equality, like a Moby re-mix of a '60s anthem that's been beaten into background noise by boomer radio. "In every language," Lakoff explains, "some linguistic forms are said to be 'marked,' their correlates 'unmarked.'" Unmarked forms are generic, the standard; marked forms are some variation on that standard. For example, in English, present tense is unmarked, future and past are marked. Masculine is unmarked (mankind, policeman, freshman); feminine is marked (actress, waitress, coed). For the unmarked, dominant members of society, Lakoff argues, "your attributes are invisible, as your role in making things the way they are is not noticeable."

In the chapter on the Clarence Thomas-Anita Hill hearings, Lakoff uncovers some linguistic tricks for holding that power. Cowed by Thomas' brilliant (ab)use of the term "lynching," the Judiciary Committee subtly bullied Anita Hill toward their foregone conclusion. They allowed Thomas an average of 1.386 seconds of "gap length" after the end of his answer and their next question; they gave Hill 1.046 seconds. "Temporal space is metaphorically equivalent to physical space: You 'give space' to those you respect; you crowd in on people ... you wish to intimidate." Lakoff also notes that questions addressed to Hill more often included "tags," ending in "is that correct?" or "didn't you?" Among its other uses, "a tag emphasizes the power of the questioner to force a response."

The book could use more of this type of analysis and less rehashing of familiar points: The Simpson and Lewinsky scandals in particular have been so picked over by the media that we've already read plenty about Johnnie Cochran's preacher cadences and Clinton's definitions of "sex" and "is." Nor have these scandals affected our daily lives. A book about political power should have focused more on stories like the Hill-Thomas hearings, which rippled into public life: Sexual harassment has been named, codified and made punishable.

In Lakoff's disussion of the p.c. debates, she points again and again to examples of misplaced rage: White guys who'd never expressed a political sentiment in their lives suddenly were bewailing the injustice of having to say "Asian"; non-sports fans fiercely defended team names like the Braves and the Redskins. Through the 1990s, new terms to enable bullying and racism seemed to pop up every day, among them "victim art" and "special interests." Lakoff's claim that much is at stake is bolstered by this seemingly endless parade of squabbles. Above all, "The Language War" is a depressing reminder of just how mean-spirited the 1990s were.