Mary Lou and her johns mix it up -- who's zooming who? Part 2 in a series. 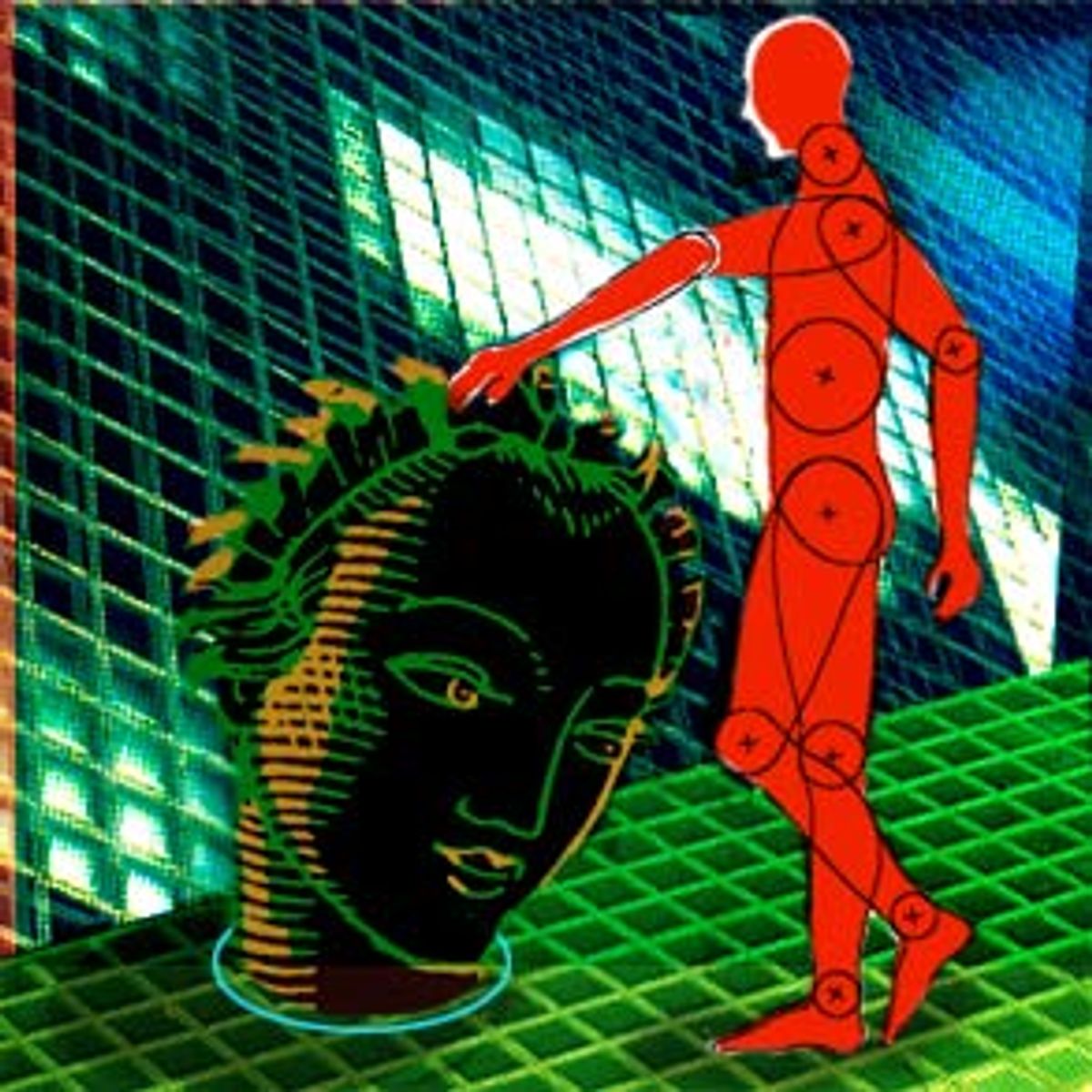 Mary Lou has spent the past two years in various beds gathering data, marveling that her johns are "all so different. It's fascinating for me to get inside their minds." She tries to look at it as an investment in "a career in psychology or sociology where I'll help people on the street or addicted to drugs or something."

She's studying the men, but they're not the ones on the street or addicted. And it's not the only time Mary Lou blurs her identity and role with her johns'. Her confusion is understandable: She's just a whore and they are lawyers and politicians and men who "work internationally, buy and sell businesses." Yet they're turning to her, so she wants the money and security that would reflect her high perch in the power structure.

The most she has made in a week so far is $1,500, from three tricks. To drum up business, she put an ad in the paper that read: "Beautiful young student in search of wealthy male benefactor." She wanted "one certain guy to take care of me, to put me through school and everything in exchange for sex. And I had a lot of calls, and met a few guys who said they couldn't afford to put that commitment into me, but they'd see me on a transactional basis."

I ask how her "wealthy male benefactor" would differ from a rich husband. Mary Lou says, "I'd prefer not to be married. I'm an independent person; I'd rather they came to see me at my place.

Mary Lou has no friends her own age because her occupation "makes people uncomfortable. One time I tried to tell a friend -- this really cool girl who works at a record store -- and it was like she pitied me, even after I said, 'Don't feel sorry for me.' After that, I decided not to tell people." She dropped her last girlfriend, Crystal -- the one who introduced her to First Guy -- after Crystal tried to rip her off in a drug deal.

First Guy does offer friendly advice and has her call him when she goes out with someone new, for safety. He has instructed her to "get proof of where they work [before sex]. Get a business card and give it to me, and I'll call and check them out." Mary Lou's generally afraid to push for a card, however, in what she perceives as a buyer's market. "I don't want to piss them off," she says. "I'm afraid they'll go, 'Forget it, there's plenty of girls out there better looking than you.'"

Mary Lou says one wily lawyer "showed me proof of all the money he makes, bank statements and everything. He's a millionaire but he said, 'We have to go through a trial period.'" The lawyer's proposal was free access to her for a month, with full payment at the end if he was satisfied.

"He said he'd pay for my school, my housing, everything," Mary Lou recounts. "So he asked me to go into this parking garage and give him a blow job. So I did and he loved it. He gave me $40. And I said, 'I feel way cheap; I've gotten $450 for a blow job,' and he said, 'But this is the trial period.'" She told First Guy, who said, "That's bullshit -- he should be paying you for the trial period. Drop it." She saw the lawyer a few more times anyway.

Mary Lou is so skeptical of male monogamy that she's pleased with First Guy's pale version: cutting out other prostitutes and sleeping only with her and his fiancie. He'd told Mary Lou that she'd be lucky to find a john who would keep coming back, but she exults that "it's been about two years with him, and it's still fine; he doesn't act like he wants to get rid of me or trade me in."

Her skepticism about the long term makes sense: Almost all her johns are married. "Clients all say they love their wives, but the wives don't fulfill their sexual needs. One guy's wife doesn't like sex; another one says he's not attracted to her anymore; another one says he hasn't seen his wife naked in 10 years because she has issues about getting older. Maybe she wants him to remember her body the way it was."

Several johns have asked to buy her clothes and perfume rather than give her money, as if to make the transaction more like a date. The kinkiest request she has had was from "one old guy who asked me to spend the night. I felt sorry for him and said yes. He wanted me to smack him around a little, tell him what to do ... He couldn't get it up; he just seemed lonely."

Fifty-five-year-old First Guy, on the other hand, "can go three or four times a day, for 45 minutes at a time. No Viagra," Mary Lou says. "He has to use Viagra with his girlfriend but not with me. I guess she doesn't turn him on, but he does love her. I asked him, 'Why are you marrying her? Why don't we get married?' and he said, 'By the time I'm old and drooling on myself, you're going to want to have a kid.'"

When she and First Guy were beginning to grow closer, Mary Lou remembers, "During sex, he called out, 'Love me. Love me like I was young.' And I was like, Oh, my God, that's why he sees me. He's upset he's getting old."

First Guy's relationship to Mary Lou's youth is more complex than youth by proxy or enjoying the father role, though those are both part of it. He also likes her as a status symbol, like some Viagra-busting gadget from the Sharper Image or Brookstone. Mary Lou says, "He kisses me in public, to flaunt it he's with someone so much younger. Once in the car, right in front of me, he turned to his two friends and said, 'You know, her dad's only 38 -- her father is younger than me!'"

First Guy shares one particularly adolescent move with President Clinton: "He'll call up his buddies while we're having sex," Mary Lou says, rolling her eyes. "He asks me to talk dirty to them and then he takes the phone and says, 'Guess what I'm doing.'"

But sex, even paid-for sex, isn't just about power, and the johns are human. "These guys want to know my life history, where I come from, why I do it, how long I'm going to do it," Mary Lou says. And it appears that the men do worry about this bright, lovely child selling herself. And somehow their concern coexists with the urge to deep-throat her and flaunt her and buy her.

Since they care about her, Mary Lou reasons, and since "these are important, professional men, they may provide me opportunities. I feel like I have some kind of connection if I need something; I could call them up if I need advice or someone checked out."

Given the betrayals crowding her whole short life, her trust seems impossibly innocent, not so much stupidity as grace.