The man who labeled Gore a first-class fibber prepares to finally endorse him. 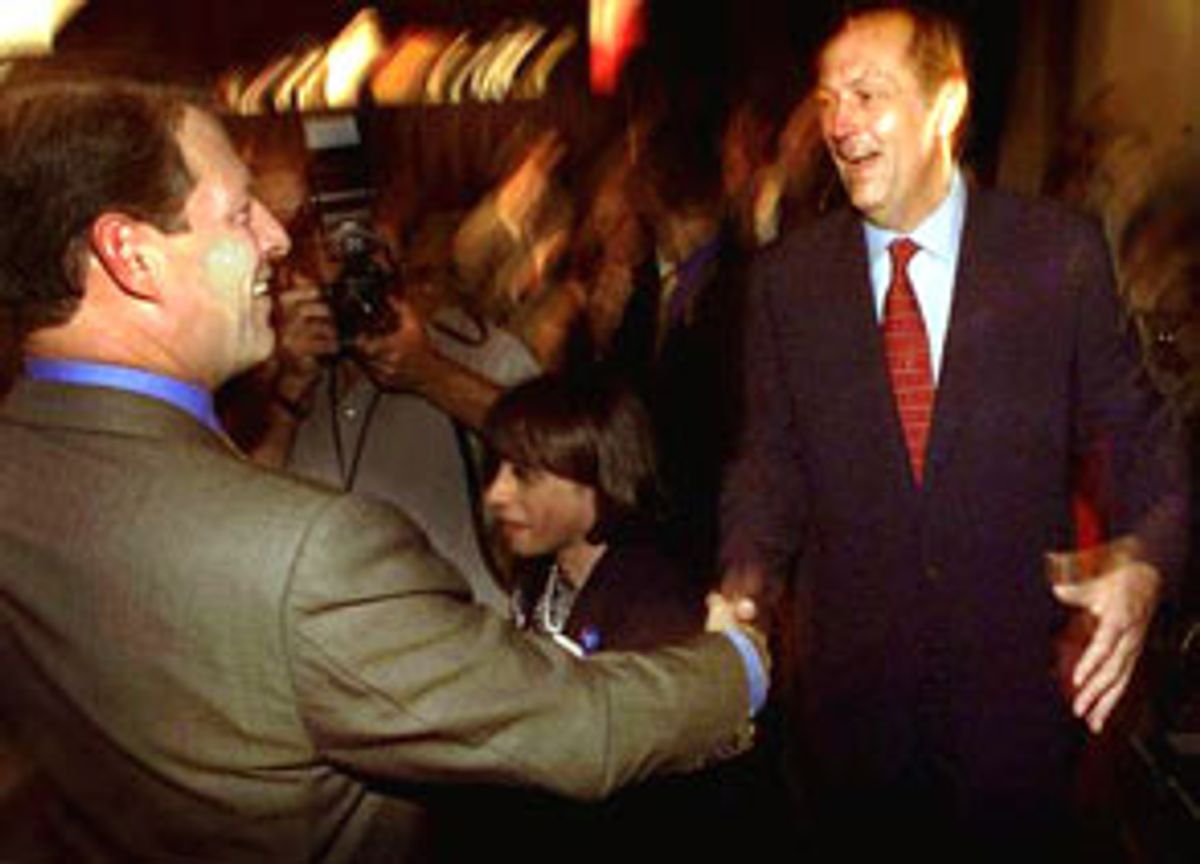 Throughout their battle for the Democratic nomination -- which ended up not being much of a battle at all, with Vice President Al Gore winning every single primary and caucus -- former New Jersey Sen. Bill Bradley could barely conceal his disdain for Gore and his campaign style.

"Why should we believe you will tell the truth as president if you don't tell the truth as a candidate?" he asked the veep on Jan. 26, in a quote rehashed weekly in press releases from the campaign of Texas Gov. George W. Bush.

The Bush releases -- called the Gore Detector -- allude to Bradley's most notable success during his primary run against Gore: labeling him a first-class fibber.

Now, after months of travel, reflection, writing, family time and even a bit of mountain climbing, the former senator will finally emerge from his Solzhenitsyn-like solitude Thursday to campaign in Green Bay, Wis., for his former arch rival. And bygones will be bygones.

Those close to Bradley say that no one should look for any grimaces or knowing winks to the media connoting an acknowledgement of the charade of the event, like those witnessed when Arizona Sen. John McCain formally endorsed Bush. The hostility between the two Democrats was close to that of McCain and Bush, however.

Throughout the fall and winter, Gore's needling of Bradley's "academic" personality, his intimations that Bradley was a bad Democrat, and his naked distortions of various Bradley Senate votes and policy proposals had their desired effect: They not only knocked Bradley off his game, they hurt him personally. During a debate in January, for instance, Bradley -- saying he had "a deep commitment to the issue of race in this country" -- said that he was "really offended" by Gore's charge that his healthcare plan would "consciously, as part of a policy" hurt African-Americans and Latinos. Gore responded with typical empathy, invoking Harry Truman by bellowing that "I'm not giving him hell, I'm just telling the truth and he thinks it's hell."

When Bradley announced his withdrawal from the campaign on March 9, pledging to support Gore, he mentioned the "distortions and negativity" of Gore's campaign against him.

"I hope he runs a better campaign," he noted, while also refusing to use the word "endorse."

Aides insisted that his refusal to use the word didn't mean anything, but when Bradley himself was asked if there was significance to his careful diction, he replied -- in characteristically elliptical fashion -- "It's your call."

"Bill's not going to spend the fall rehashing the primary campaign," says former Bradley communications director Anita Dunn, who has since returned to her previous job as a Democratic consultant at Squier Knapp Dunn Communications. "Bill will use the word 'endorse' on Thursday, and he will make it clear that Al Gore is his choice for the White House."

"We'll do a formal endorsement and talk about the specific reasons why Al Gore will make a good president," confirms Eric Hauser, Bradley's former press secretary, now back at the helm of his lefty public relations shop, the Hauser Group.

Dunn says that Gore has been Bradley's choice, as stated publicly, since March 9. When Bradley emerged to vote in the New Jersey primary on June 7, he told reporters staked out at his Montclair, N.J., polling locale that he was voting for Gore. Of course, the only other candidate on the ballot was convicted felon Lyndon LaRouche.

But Dunn says that for Bradley the choice on this November's ballot is almost as stark.

"The fact is, the decision voters have in this campaign is between two very different leaders, and two very different people, and Bill Bradley feels that Al Gore would be the best leader," Dunn says. "That's what he's going to talk about on Thursday and throughout the fall."

The Gore campaign, typically, downplayed the event's import. "Senator Bradley made his support clear when he left the race," said Gore spokesman Doug Hattaway, "This will reaffirm that. Everyone's looking forward to his active involvement in getting Democrats elected across the board." The joint campaign appearance will take place at the Bay Beach Amusement Park where, on Aug. 9, 1934, President Franklin Delano Roosevelt "spoke about government working on behalf of average people instead of the wealthy and special interests, which kind of fits in with our theme this week," according to Hattaway.

If nothing else, Thursday's event may put an end to the Republican National Committee's relentless reminders of Bradley's disgust with his former opponent, and his clenched retention of the word "endorse."

RNC Chairman Jim Nicholson put out a press release in early June saying that he wanted "to soothe bitter feelings created by Gore's barrage of mean-spirited attacks on and distortions about the former Senator and basketball star." To expedite the healing process, Nicholson jokingly offered to give to charity $353 in Bradley's name if the former senator agreed to use the word "endorse" within five days. The amount, Nicholson was nice enough to explain, is "the same whopping sum Gore gave to charity in 1997."

The RNC went so far as to put Bradley's face on a "Wanted" poster and a milk carton.

According to those close to the former senator, however, the four-month gap between Bradley sightings is easily explained. "He's been trying to figure out what's next in his life," Hauser says.

Bradley's been taking vacation, closing down the campaign, raising a bit of money for "Time Future," his political action committee. He's also been busy writing, working on a book (on an undisclosed topic) to be published this fall. His spitfire wife Ernestine dragged him mountain climbing in Italy. And, of course, there has been the inevitable time that Bradley spends doing nothing more than, apparently, pondering.

"He's someone who always takes the long view, and I think he's doing that now," says Hauser. "He's one of the most balanced and well-adjusted public figures I've ever met or even known of."

And even though there has been no love lost between the idealistic Bradley campaigners and the cutthroat mercenaries over at Team Gore, the latter "have been extremely accommodating," one Bradley source said.

Hauser, not usually known for his nice words about the Gore team, says of the negotiations: "It's been steady and amiable throughout."

Sources close to the negotiations explained that the talks revolved around three issues: the ongoing delegate selection process (Bradley picked up about 500 delegates during the primaries, though the official number won't be known for a few days); what Bradley's role would be at the Democratic convention; and what Bradley's assistance with fundraising would be. And, of course, there was the timing of the endorsement to discuss. For the Gore campaign, former chairman Tony Coelho had been in charge of the back-and-forth, and has since been replaced by new chairman Bill Daley. John Roos, a partner in Silicon Valley's powerhouse law firm Wilson Sonsini Goodrich & Rosati and a Bradley friend for more than 20 years, represented the former Princeton All-American.

All the matters are pretty much settled, Bradley sources say. While it remains unresolved if the Bradley delegates will be allowed to vote for their man on the first ballot, the Gore team has been more than willing to ensure that certain stalwart Bradleyites will get to attend the convention as delegates as partial reward for their hard work.

One sore point for Bradley is the quick endorsement Gore got from Bradley campaign manager Doug Berman, who endorsed Gore on March 21 without first notifying Bradley, who was on vacation. Berman and his wife are Gore delegates from New Jersey, and Bradley, according to sources close to him, is pretty miffed at his former campaign chairman.

At least one other member of the Bradley team is hopping on board with Gore, though Bradley's fine with this assignment

Bradley's longtime fundraiser, the diminutive, able Betty Sapoch -- once referred to by the Washington Post as "the grandmother behind Bradley's money machine" -- will help the Gore team with fundraising, particularly "hard" dollars. Bradley won't be too active in this area, advisors say, but when those who have donated to Bradley hear from Sapoch, "they'll know that they're hearing from Bill Bradley," according to one source.

Those close to the senator demurred in describing his role during the convention, preferring the Democratic National Committee to make the announcement when everything has been formalized. Expect him to make a prime-time speech on either Monday or Tuesday, suggests one source.

Bradley's health -- a nagging question during the campaign, after a recurring problem with an irregular heartbeat received a lot of press -- is reportedly very good. The rigors of the campaign trail behind him, the most strenuous activity he's had in the last four months has been hiking an Italian mountain with his wife.

"Put it this way," one Bradleyite says: Those attending the Gore-Bradley lovefest on Thursday "will be able to tell which group of people have not been campaigning since March."