Is it possible to survive one week marooned with a $99 Internet appliance? 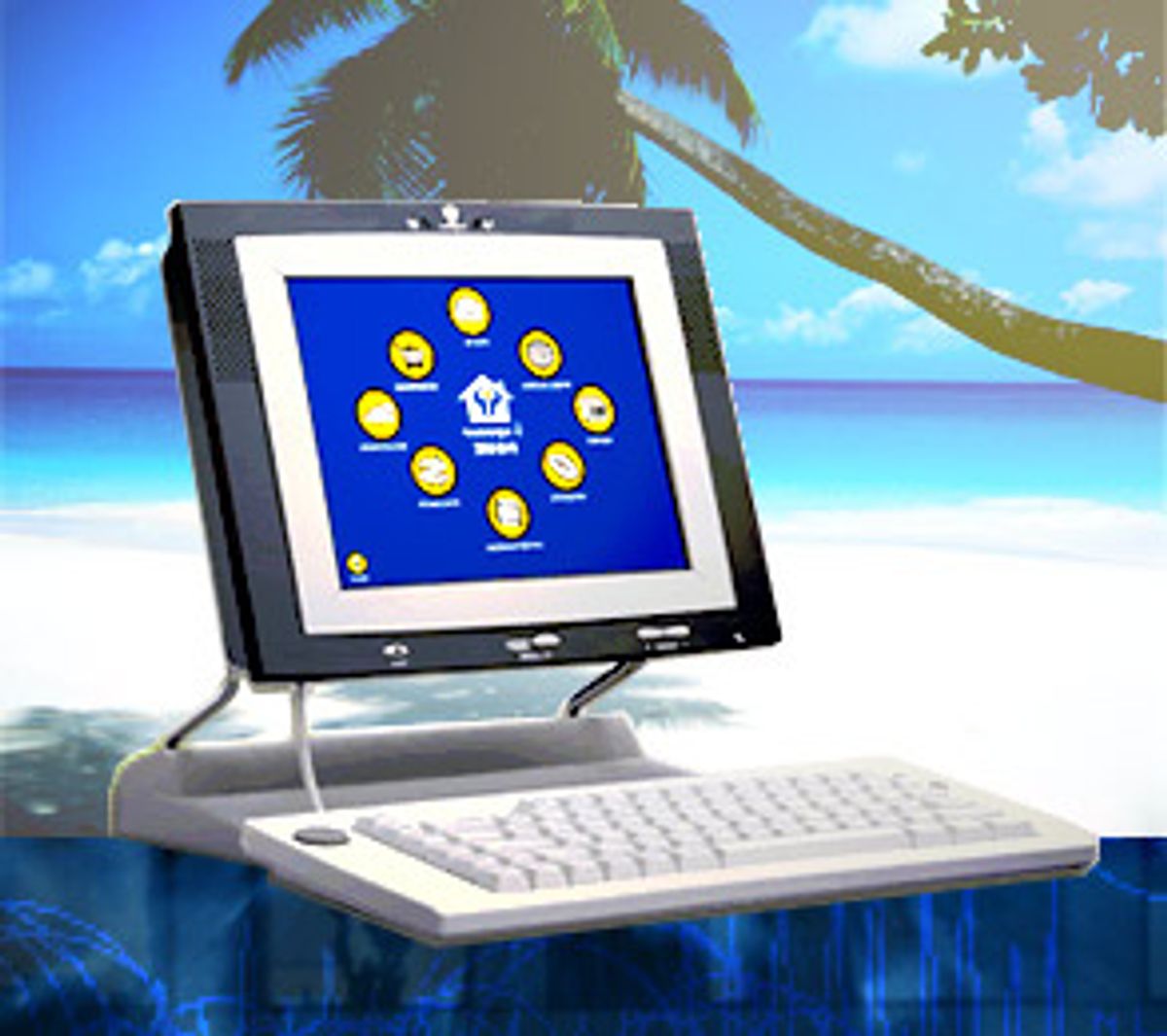 This seems to be the summer of deprivation. On PBS's "1900 House," a British family lives for three months without a water closet. On CBS's megahit "Survivor," the denizens of Pulau Tiga get by without electricity or sturdy shelter. On MTV's latest season of "The Real World," seven youngsters carom around a New Orleans mansion from day to day without the burden of superegos.

In keeping with that spirit, when my Macintosh PowerBook fell prey to crippling seizures in early June, I sent it off to be repaired and resorted to using an i-opener, a stripped-down Internet appliance, for a week.

Internet appliances have been the "next big thing" since Oracle CEO Larry Ellison started trumpeting their potential in the mid-1990s; the difference now is that they're actually available to consumers. By Christmas, there could easily be a half-dozen different models on the market.

Internet appliances provide a connection to the Net and some pre-loaded e-mail and browsing software, but no hard drive. They could bring Net access to the estimated 40 percent of U.S. households that don't already have PCs, and could also serve as second computers -- bare-bones surfing devices -- in homes that already have a traditional PC.

One question is how profitable the "forgotten 40 percent" -- households that haven't yet scraped together the cash for a PeoplePC, (a 400 MHz Toshiba desktop can be had for $24.95 per month) or an eMachine (a 500 MHz computer starts at $399) -- will prove to marketers of Web stock brokerages, online services and home grocery delivery firms. The folks who are just now considering getting online undoubtedly will require much more support and hand-holding than earlier adopters. Another question is whether the devices will be as functional, addictive and easy-to-use as those other household favorites: the telephone and the television.

But before long, Internet appliances will likely be given away by banks, ISPs and brokerages in order to attract and retain customers, whose monthly fees would eventually cover the cost of the devices. In late June, Intel announced the Dot.Station, a $500 Internet appliance that will be distributed exclusively through those kind of partnerships.

Oracle is releasing its own Internet appliance, the New Internet Computer, this week, and America Online and Gateway are rumored to be on the verge of announcing something called the "Web pad," which is expected to cost around $600, though consumers who commit to a long-term AOL subscription will undoubtedly pay much less. The MSN Companion, a device that will be available as soon as August, will be nearly free if buyers engage in a lingering lip-lock with MSN.

Of course, much of what made the i-opener so appealing to me was its $99 price. The thing was practically disposable; it was certainly cheaper than renting a substitute PowerBook for a week. And it was easy to imagine i-openers being given as Mother's and Father's Day presents, or a couple of them sitting under the Christmas tree. Compared to the other Internet appliances already on the market, like WebTV and the Mailstation -- the i-opener simply offered more for the money. (The Mailstation, at $99, doesnt even let you surf the Web or open e-mail attachments.)

But after I'd got my hands on one, Netpliance unveiled a radical alteration of its pricing. The company had been hinting all along that $99 was only an introductory price, and that it would rise to $199 around Father's Day. Instead, on June 29, Netpliance issued a press release announcing that not only was it not going to sell any more $99 i-openers, but it wasn't going to sell any i-openers at all until this fall, when the price would rise to $399. The hardware will stay the same, and users will get a few new features, like instant messaging, stock tracking, and support for up to four e-mail accounts -- but the new price could render the i-opener about as appealing as a tanning lamp on Survivor Island.

Here's the record of my seven-day survivalist stint with the i-opener.

Day One
When Netpliance introduced the i-opener earlier this year, enterprising hackers started snapping them up at $99, cracking the back of the screen and adding an external hard drive. That created a very cheap, very functional PC; the i-opener comes with a 10-inch color LCD screen, a 200 MHz processor, a USB port, a 56 Kbps internal modem, and a decent-enough keyboard with a built-in pointing device. But because that segment of consumers never activated the accompanying $21.95 a month Net service, Netpliance lost money -- close to $400 on each machine.

To combat that, Netpliance changed the rules. When I went to the Cambridge, Mass., CompUSA store to buy mine, I was informed that I had to sign up for access on the spot and provide my credit card number for billing. CompUSA staffers told me that I had to buy a year of access, but after reading a letter taped to the i-opener's box and calling the company, I discovered that the required subscription term is only three months. (With its subsequent change in pricing, the company decided to waive its service contract -- you can cancel it whenever you want, but the i-opener won't work with any other ISP.)

At home, setting up the i-opener took five minutes. The only technical knowledge it required was how to use a standard phone jack and where to find a power outlet. When plugged in, the i-opener turns on automatically. There are no modem squawks when it dials up to find a local access number. I was online within 10 minutes. The keyboard is full-sized, but typing on it feels a bit like using one of those fake, hollow computers you see on display in office furniture stores.

Day Two
Panic strikes when I discover that the "pizza" key on my i-opener's keyboard is useless. (It takes me to the Papa John's Web site, which informs me that none of the Papa John's locations in my Boston neighborhood take Internet orders.) The i-opener does have its merits, though. It switches on instantly. There's no long boot-up sequence, unless you unplug the machine from the wall. If you're online and a phone call comes in, the i-opener automatically cedes the line, and your phone starts ringing. There's a light built into the top of the screen that shows you when you've received mail, even if you haven't logged on recently (the i-opener dials in surreptitiously.) The i-opener's custom interface is well-designed and easy to use, and it includes the most functional and dummy-proof e-mail system I've ever seen.

Day Three
Surfing the Web with the i-opener seems more sluggish than it does with my PowerBook, even though both have 56k modems. There's no way to discover what speed the i-opener is actually connected at, but when I listen to streaming audio through the monitor's built-in speakers, the connection is 16 kilobytes per second -- none too zippy. And the "stop" button on the Web browser doesn't seem to be much help when downloads jam; often, the only thing that works is closing the Web browser and restarting it, or breaking the connection and then re-establishing it.

The i-opener is also limited in what it can do on the Web. It can't view Flash animations, for example, and many uses of JavaScript -- such as opening a second browser window -- befuddle it. Also, the i-opener's browser doesn't support strong encryption, which prevented me from gaining access to my brokerage accounts. You can listen to RealAudio streams -- but no video.

Day Four
The first high-pressure test. The deadline for my weekly Boston Globe column is today, and I've been writing it using the i-opener's e-mail application, which lets you save drafts of your mail before sending them. It's a workable substitute for Microsoft Word, though the one feature I miss is being able to get a word count. The message gets to my editor without a snag, and is neatly filed away into the "Sent Mail" folder.

Day Five
There's one mysterious, unmarked key in the bottom-left corner of the i-opener's keyboard. Hoping that it might take me to the top-secret Los Alamos National Lab Copier Cam site, I press it repeatedly. Sadly, it does nothing. (It's on the opposite side of the space bar from the pizza key, though, so I imagine one day it might be used to order burritos, that other staple of the computer user's diet.)

Day Six
Frustration mounts. I miss the ability to toggle back and forth between a Web browser and my e-mail program. There's no copy-and-paste ability with the i-opener, for example, so you can't copy a URL from the Web or a section of text and e-mail it to a friend. Occasionally, my surfing is interrupted by a message that says the i-opener is running low on memory, with no suggestions about how to remedy the situation.

When I hit the keyboard's "Chat" button to look for other i-opener users to commiserate with, I'm told that "the Chat Channel is currently not available. When it is available your i-opener will be automatically updated with it and you may then start chatting with others." I'm not holding my breath.

Day Seven
I'm ecstatic when Tyler from the repair shop calls to let me know that my Mac has been fixed sooner than expected. Using it again, I feel like I've traded up from a Yugo to a Ferrari. The i-opener offers a connection to the Web, sure, but it's a connection that would seem slow and frustrating to anyone who has ever used a recently released browser on a full-featured PC. And it seems like Internet appliances will have a hard time keeping up as the Web evolves; you can't play MP3s on an i-opener, for instance, or use any kind of new plug-in or downloadable application.

With my Mac back in hand, I relegated the i-opener to second-string status. I decided it would either be a backup in case something ever goes awry with my main machine, or that I would give it to my mother, who owns a Pentium-class laptop but is fearful of using it.

I realized I'd come to two conclusions after my week of dependence on the i-opener. First, for the forgotten 40 percent: Any access is good access, and it's unlikely that computer neophytes would have been bothered by any of my beefs about sluggishness or missing features. Second, for people who already have experience using the Net: What would make Internet appliances really interesting is the ability to couple them with high-speed access, like DSL or a cable modem. (The i-opener only works with the company's own dial-up service right now.) Then, appliances might be useful in the kitchen to place a grocery order, or at the breakfast table to browse the news online.

Still, it's tough to imagine why someone would buy a device with as many limitations as the i-opener has for $399, when a real computer can be had for little more. Some full-featured PCs already cost less -- or are even free -- with multi-year MSN or CompuServe contracts. Netpliance seems to be hoping that the forgotten 40 percent are more concerned with simplicity than price. (I think they're wrong.) But one thing is for sure: As more Internet appliances debut, manufacturers' marketing and pricing machinations will become as entertaining as "The Real World's" bed-hopping, "Survivor's" behind-the-back scheming and "1900 House's" chamber pot-emptying.