The queer world of the X-Men

OK, Wolverine never built a shrine to Judy Garland, but "the strangest teens" were obviously homo superior -- emphasis on the homo. 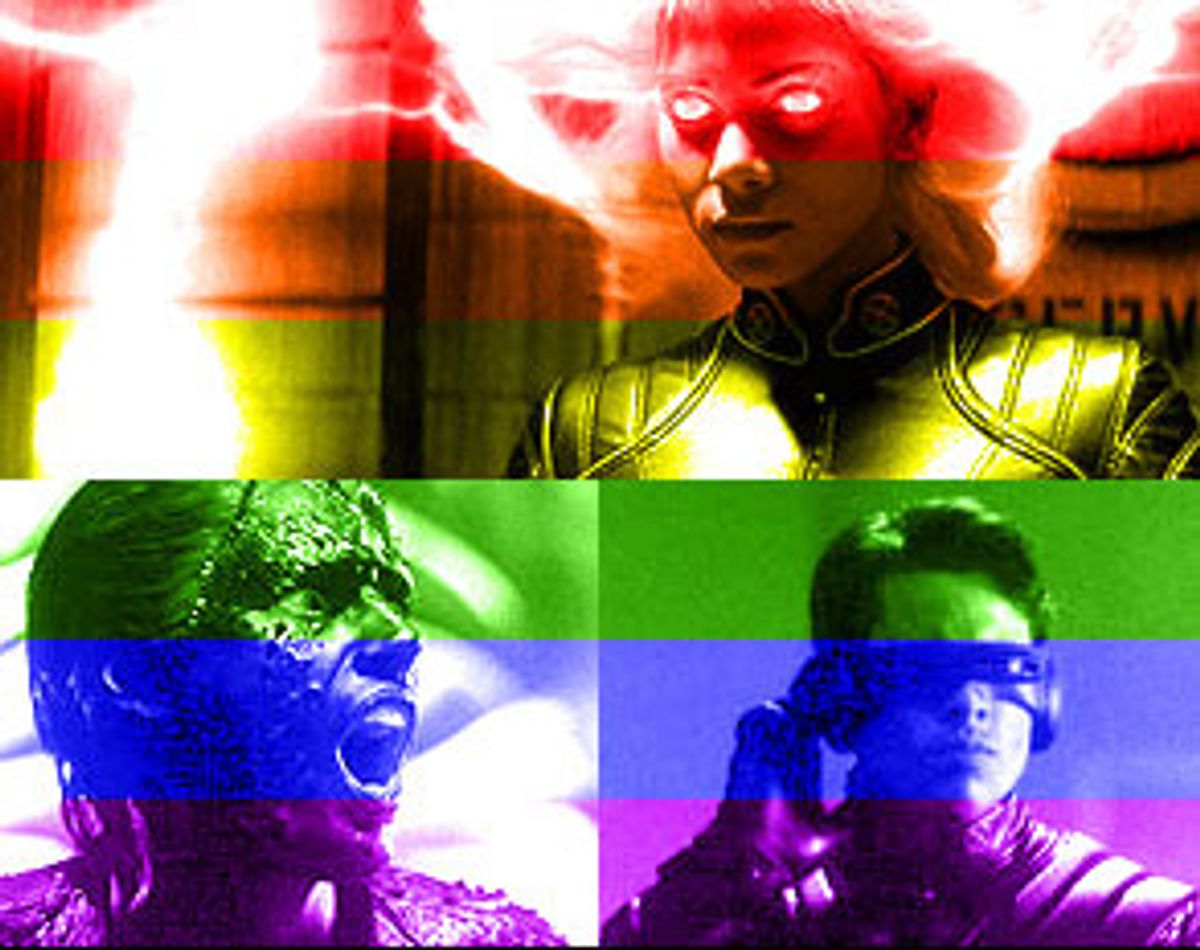 It was all a big mistake, really. I had a flu sometime in the middle of 1979, and when my mother went to the store for more ginger ale and Jell-O, I asked her to pick up a particular comic book for me. I thought I was fairly specific in my instructions. But mothers, as all adolescent boys know, should not be trusted to make minute distinctions among comic books, and what I ended up with was the current X-Men Giant Size Annual No. 3 ("The Awesome Attack of Arkon"). It got me through another day on the couch, and soon after I bought another X-Men comic (issue No. 128, "The Day Reality Went Wild") out of curiosity. The characters and situations were complicated, the art was crisp -- even the lettering seemed lively and engaging. I didn't miss an issue for the next five years.

Comic books get a lot of people through adolescence, and of course, they're mostly people like me: boys, mostly geeks, weirdos, smart kids -- in a word, mutants. And that's the whole point of the X-Men, that they're mutants, genetically different from those around them. By the time I was 12 or so, I had figured out that reading this stuff wasn't exactly going to teach me how to rule the school; it was a marginal, suspect activity, like Dungeons & Dragons, or arson. And although over the years since then I have been mildly interested as the characters popped up in video games and Saturday morning cartoons, I didn't think about them twice.

But when I heard there was going to be a movie, I suddenly began to feel proprietary, like the guys who claim to have loved R.E.M. back when Michael Stipe still had his day job. The symbols of my junior-high loserdom had gone major label on me, and so as the advertisements and press articles began to make X-Men a household word, I dug out my old, neglected boxes of comics to try to figure out what had made them so important to me in the first place.

Even in the angst-friendly world of the comic book, the X-Men have always stood out. They were invented in the '60s by the legendary Stan Lee, who revolutionized the superhero genre with his creations: Spider-Man, the Fantastic Four, the Hulk and more. In a rare break from the Cold War origins Lee tended to give his heroes, the X-Men were not people who had been bombarded by fallout or bitten by a radioactive trout; they were "mutants," people born with psychic talents or the ability to shoot red power beams from their eyes, not Homo sapiens but homo superior.

Embodying the adolescent feelings of difference and alienation, the original X-Men were also all teenagers: "The Strangest Teens of All!" they were billed. They had been taken in by older mutant Charles Xavier, known as Professor X, at the good professor's "school for gifted youngsters," a prep-school-like haven where they could practice their abilities and fight evil. They even had identical school-uniform-style costumes.

In 1975, at a time of languishing comic sales, the original team was kidnapped and replaced by a new group of students at Xavier's academy, a somewhat older and more individualized group, which incorporated some of the original members. It was this team of X-Men who, under the creative guidance of writer Chris Claremont and artist John Byrne, took the comic book to a new level of sophistication. In its new incarnation, "The X-Men" continued to speak to a teen audience, but its appeal was subtly different; rather than allowing disempowered or alienated kids to identify with superempowered alter egos, the new comic drew attention to the metaphoric possibilities of being a mutant.

Like punk's appropriation of West Indian reggae, the white B-boys with their hip-hop and baggy jeans and the young girls curled up with copies of "The Diary of Anne Frank," the new X-Men made sense of mainstream teen alienation by appropriating the experiences of minority groups coping with much more powerful and genuine forms of discrimination. Whether deliberately or not, the comics created parallels with African-American, Jewish and, most surprisingly, queer culture.

The new team was, for a start, much more international and slightly more racially diverse -- the heroes came from Canada, Egypt, Russia, Germany, Ireland, Japan. And although their only black character, the Cairo-born Storm, was not American, the politics of race are vivid in the mutants' struggle for acceptance by humans. The X-Men's most consistent foe is Magneto, who plays a kind of Malcolm X to Professor Xavier's Martin Luther King Jr. Magneto is also a mutant, but while Professor X strives for equality with humans, saving them from world destruction even while they fear and legislate against his kind, Magneto regards mutants as the superior group and advocates war with humanity.

Magneto is one of the most complex and ambiguous villains in the world of superhero comics. Named Erik Magnus Lehnsherr, he is the sole member of his family to have survived Auschwitz. Scarred by the experience, he has decided that humans, because of their oppression of mutants, are no better than the Nazis and deserve no sympathy. Although he is identified as Gypsy rather than Jew, it seems plain that Magneto is the radical Zionist to the more peace-seeking Professor X. Can it be a coincidence that the two characters first met -- and became friends before becoming enemies -- in Israel shortly after that nation's founding?

But the most forceful metaphor represented by mutanthood is homosexuality. Homosexuality, like mutancy, is a hidden difference -- gays walk among us, and we never know who might be one. It is a condition that manifests itself in adolescence, and when it does, it frequently causes the confused and scared young person to be ostracized from both community and family.

Professor X is a key part of this construct. He provides these young people with a community, a "safe house" (albeit one with a Danger Room) in which they can learn to use their newfound powers in the company of others like them and with the tutelage of the older, wiser Xavier, a den mother from the pre-Stonewall days. If the earlier X-Men evoked a pleasant prep-school camaraderie, those in the new group are forever referring to themselves as a family, an alternative and in many ways idealized family where those who are feared and misunderstood by the larger society can forge a sense of identity.

The comics also recognize the political and ideological forces that threaten those marked as different. The Sentinels, robots created by the U.S. government to detain or exterminate mutants (so how paranoid does Magneto look now?), are dispatched by certain mutant-hating politicians, notably Sen. Robert Kelly, who also appears in the X-Men film.

Kelly's objections to the mutants have a generalized, Orwellian or McCarthyite vibe about them; one feels that he simply objects to difference as such. But in the 1982 X-Men graphic novel "God Loves, Man Kills," the allegory to gay-bashing is more explicit. This story introduces the Rev. William Stryker, a character clearly modeled on the political preachers on the Christian right who flourished in the '80s. The use of religious rhetoric to condemn gay culture and sexuality frequently takes a similar path, and the comic draws a vivid picture of how Stryker's crusade leads to violence against those labeled as deviant.

Of course, this doesn't mean that we will be learning about Wolverine's secret shrine to Judy Garland, or that Storm will be wearing a pink triangle on her costume anytime soon. The point is not that the X-Men are themselves gay, or even that a comic-book reader would necessarily see the parallels I've drawn; it certainly never occurred to me at the time I was reading the comics. Instead, the comics' evocation of the ordeal -- and the hostile rhetoric -- that many gay men and women face allows the adolescent reader to see his or her own alienation in the experiences of these characters.

But perhaps it is not entirely an accident that the first openly gay comic-book character (unlike, say, the "open secret" of Batman and Robin) was Northstar, a member of the Canadian mutant team Alpha Flight. And once the idea presents itself, any number of odd associations come to mind. David Bowie might as well have had the X-Men in mind when, in the '70s, he created his own private rock 'n' roll cosmology in which the old making way for the new and sexually transgressive youth cultures signified the advent of the homo superior -- with the accent firmly on the homo. (See "Oh, You Pretty Things.")

Promotional materials for the X-Men film suggest a recognition of these queer strains in the X-universe. The print advertisements so far have been run as faux-political diatribes about the mutant menace, and promotional Web site Mutant Watch gives a campy spin to this "Blair Witch Project"-style marketing viriti. It even includes a hilarious "Are You a Mutant?" quiz with diagnostic questions like "Do your parents have difficulty understanding you?" If that is the criterion for being a mutant, it isn't hard to see why teens -- or for that matter, adults -- would feel a certain affinity with the X-Men.