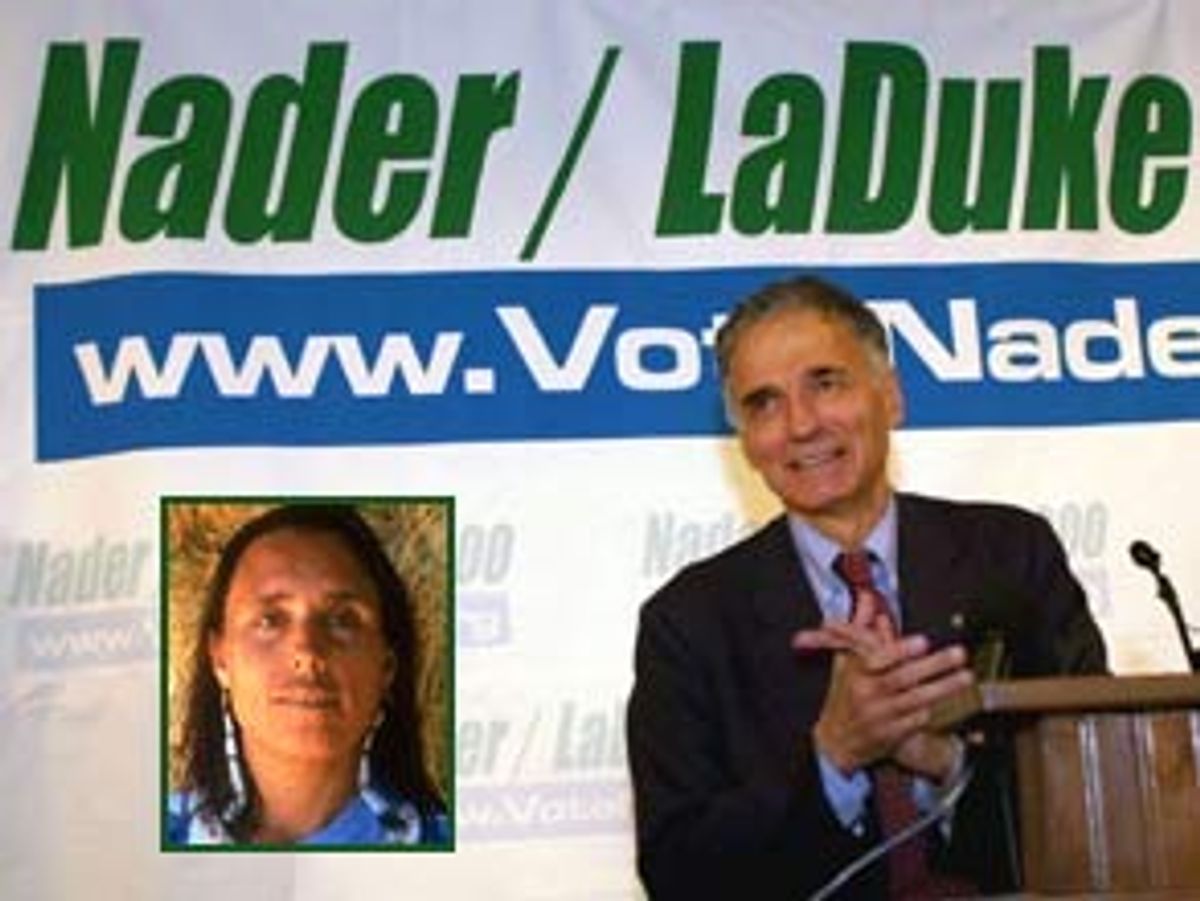 Winona LaDuke says she has better things to do than run for vice president. Though she's won that honor from the Green Party, and will back up consumer activist and presidential hopeful Ralph Nader for the second presidential election in a row, LaDuke is a crusader with a rainbow of capes. The Harvard-educated economist, activist and writer can speak volumes about the evils of federally funded uranium mining on Indian reservations and America's insistence on giving military aid to questionable foreign regimes. In short, LaDuke can tell you everything that's wrong with the club she's working to join.

But winning's not the point here. For a national candidate, LaDuke seems strangely ambivalent about the results. Shes not having any of that "spoiler" stuff, the accusation hurled by many Democrats - and most prominently, the New York Times editorial page -- that all she and Nader can do is ruin Al Gore, a man whom she finds inadequate, though preferable to George W. Bush. But Gore hasn't earned those votes, she'll say, and if he loses, that's too bad. Besides, to many Americans, it doesn't matter who is in Washington, anyway.

So why does it matter to her? Veep candidate and would-be valiant loser LaDuke spoke to Salon about her critics, her qualifications and her own possible conflict of interest.

How do you feel about those who dismiss you and Ralph Nader as no more than spoilers who should otherwise not be taken seriously?

I think they should consider the rising number of Americans who just don't vote anymore because they don't think political insiders and their policies are relevant. When speaking of who speaks for the American people, we should reflect on how the American people vote and how they act.

What do you think about the way the media has characterized you as a candidate? Youve certainly been portrayed as an extremist by some.

I find it insulting. Some of the coverage just refers to me as a Native American woman or a Native American activist. I'm Harvard-educated, I'm an economist by training. I'm an author, a journalist, as well as being active in community development. If we use those terminologies, we dismiss the vast array of Americans who ... we don't have a single label that can be put in a sound bite. Actually, I consider myself to be pretty politically conservative.

Would you still be running if you thought your candidacy would effectively ensure George W. Bush's election?

I'm going to give you an answer that, this is not the answer that Ralph would give. I'm going to give you an example. We filed a constitutional rights lawsuit on my reservation, and I had to go out and interview all these old people. And I found that many of the old people on my reservation didn't know who was president. That kind of pointed out to me the irrelevance at times of who is in Washington.

It's quite likely that Bush's record in Texas indicates that he doesn't care [about] policy making, but things are not great under the present administration. Nor would they be under a Gore administration for many millions of American workers who are losing ground in salaries, whether because of multinational corporations that move their jobs elsewhere, or the downward mobility of wages. So my question -- and Ralph's question, I believe -- is that don't we believe we deserve better? And to get to better, it doesn't happen overnight.

Are you saying that four years of Bush is something you could tolerate in order to move the debate forward on some issues that are getting overlooked?

Not quite. I would not say "tolerate." I would totally detest four years of George W. Bush. What I'm saying is that the difference between the two [candidates] and what we need for America is pretty substantial. Those two do not actually address the root causes of what is wrong with America. And it's not about a theoretical state, it is about systemic change in a country with this vast amount of resources where there is no reason for all those children to be in poverty, for all those people to be in prison, and there's no reason for this level of environmental degradation. And, in order to heal our country and reconcile our country, we have to ask for and demand that our leaders do better.

I'm not going to say I'd feel bad, because I can't feel bad.

It's really going to be lousy if [Bush] gets in. But I can't stand to continue this [election] process where the whole thing gets degraded and goes into a downward spiral. I mean, look at the choices, and they're getting worse.

Your ancestors were Anishinabeg Indians. Do you feel that American Indians should be given sovereign nation status? If so, is there a conflict of interest for you in running for this nations second highest office?

I think that Indian nations should be treated as sovereign nations, and that could be a conflict. But in order for Indian people to have more power in the government, we need to become more visible. Indians didn't even get the right to vote until 1924. Can you imagine how different history would've have been had we had the right to vote back when Indians were a majority? Now, as a tribal leader, you cannot even get a meeting with Interior Secretary Bruce Babbitt. We're basically blown off by the Clinton administration because there are just 2 million of us, and that's too small a voting bloc. It's crucial that we make ourselves heard.

If you lose, what would you like to see come out of your campaign?

I would hope that it opens up the system to third parties -- real third parties, not just Ross Perot and people with millions of dollars to spend. We want to encourage people to vote based on their principles and not their fears, and we want to ensure that all these people who don't vote are not forgotten. People have a right to vote for what they believe in, for what they feel is right. It's important to remember that people died for the right to vote. And getting people back into voting, that's something worth fighting for.

Most of your work has been in domestic policy areas, like the environment and social justice. How would you be able to formulate a foreign policy?

We all have strengths in certain areas, and I think that Ralph and I would surround ourselves with good, qualified advisors to handle some of those issues. But I do have experience and ideas about foreign policy.

The first thing we have to do is decouple foreign aid from military aid. Right now, behind Israel, Colombia is one of America's top recipients of foreign aid; so is Mexico. Most of that money is spent on the military, but neither of those countries has any foreign enemies. Why do they need that money for defense? We send most of that money saying that we expect it to be spent on the drug war, but much of the military force is used against the civilian populations in those countries. Colombia has the highest rate of kidnapping in the world and there's a lot of political violence, much of it carried out by the government. When political murders happen there, many of the victims are shot with our guns.

How would you try to influence defense?

We really need to cut back on military spending. It's time to switch to a peacetime economy. Right now, we're spending up to a third of our budget on defense, even though the Cold War is over. People in Washington don't want acknowledge that. The Cold War has been over for 10 years.

What would the first anti-LaDuke attack ad look like? What in your past do you think they would exploit?

Jeez, I don't really know. I'm not perfect; I've made some mistakes in my life. But I feel really good about the life I've led and I'm not afraid to have it examined.

Now that I think about it, I was arrested in 1992. Some people may think of that as a bad thing, but I feel good about it. I chained myself to the gate of a phone book factory, a GTE factory in Los Angeles. They were using thousand-year-old trees to make phone books. I think that's a total waste of a tree.

What is the first thing you would do as vice president?

I'd pardon Leonard Peltier, but I guess I couldn't do that as vice president. I'd ask Ralph to do it. He's a victim of COINTELPRO [the FBI counterintelligence program that infiltrated leftist American groups from 1968 to 1971], and I think it's wrong that he's still in prison. People all over the world have been asking for his release for years. [The Rev.] Desmond Tutu even wants him out. The Clinton administration released those Puerto Rican activists, and I think that was the right thing to do. After years, Geronimo Pratt was finally let out of jail, too. It's time to end the COINTELPRO era in this country and release Leonard Peltier.