When the founder of the "alcohol in moderation" movement pleaded guilty to vehicular homicide last week, it was a sobering reminder that there's no alternative to quitting cold turkey. 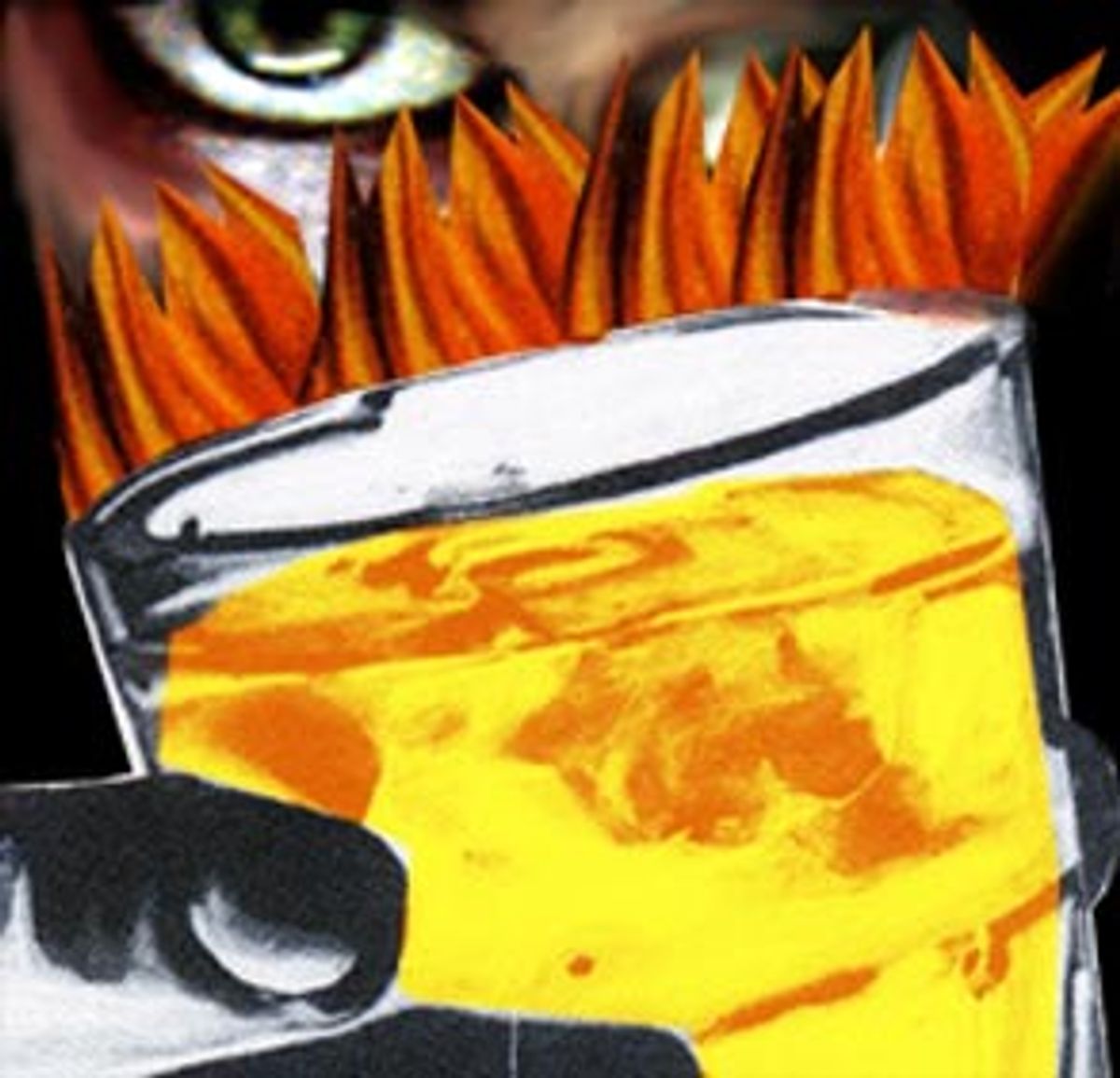 Every evening, in thousands of church basements in hundreds of cities, clusters of us sit in rows of metal folding chairs and listen to a fellow alcoholic tell his or her story. The details always vary: Some of us are rich, some poor; some were at the peak of our careers when we first came to Alcoholics Anonymous, some homeless and unemployable; some of us looked shiny and bright on the outside, some were in tatters.

But for all the external differences, the central narrative in these stories is the same, identical threads of desperation and grace woven through each. Perhaps you woke up in a hospital, unable to remember the final moments before your car careened off the road. Perhaps you lost your job, or your spouse, or your kids. Perhaps (and this is just as common) nothing at all earth-shattering occurred -- there was no tangible turning point, no financial ruin, no injury or loss of life -- but you woke up one morning and could no longer bear your own life, the corroded sense of self and dignity and hope that had come to define it.

In the common parlance, these moments are known as "hitting bottom," and they are exquisitely agonizing affairs, portraits in anguish: The jig is up, all systems failed, it's over. You peer into the future and realize that your relationship with alcohol -- which feels like your lifeblood, as vital as air, your primary drive and need and love -- has got to end.

With rare exceptions, these are also intensely private affairs, personal reckonings that take place in the darkest corners of the heart and soul. AA members may understand them intimately -- we know how scary it is to lose control over drinking and how unfathomable the prospect of living without it can be -- but even we tend to see only the tail end of the process: the drinker who's just surrendered, who's shown up at a meeting for the first time, who's trembling through the first week or day or hour of abstinence. The moments prior to that, the days or weeks or years that lead to the end, are generally solitary and dark and internal, a private hell that's largely invisible to the wider world.

Last week, when Audrey Kishline pled guilty to two counts of vehicular homicide, she gave that brand of hell a public face; an alcoholic's hidden agony was rendered extraordinarily and grotesquely visible. I first heard word about Kishline, who has made a career out of teaching drinkers to curb their consumption, an hour or so after coming home from an AA meeting. I froze in my kitchen: The news had such an eerie and familiar ring, such an "it could have been me" feel, and it made me cringe. This is a classic alcoholic crash landing, the kind of story that makes you realize how lethal alcoholism is and how precarious sobriety can be.

The irony here, of course, is 150-proof. Kishline, now 43, is the very outspoken founder of Moderation Management, a self-help treatment program that purports to help "problem drinkers" drink responsibly. Challenging most of the central tenets of alcohol treatment in the U.S., her view offered a tantalizing set of possibilities: Alcohol abusers, she suggested, could be taught to cut down on their drinking without resorting to total abstinence. Recovering alcoholics might be able to return to drinking at moderate (and therefore safe) levels, and budding alcoholics might be able to control their consumption before it got out of hand. Kishline, who clearly knew her own way around a liquor store, founded her program in 1993 and published a book -- "Moderate Drinking: The New Option for Problem Drinkers" -- a year later. An advertisement for the book said: "Based on her own unsatisfactory experience with total abstinence-based programs, Kishline offers inspiration and a step-by-step program to help individuals avoid the kind of drinking that detrimentally affects their lives."

As she has made painfully clear, moderation did not serve Kishline so well. Last March, at the tail end of a binge-drinking episode, Kishline, who is a housewife and mother, got into her pickup truck, headed the wrong way down an interstate freeway in central Washington and smashed head-on into a car, killing a 38-year-old electrician named Danny Davis and his daughter, LaSchell, who had just celebrated her 12th birthday. According to prosecutors, her blood-alcohol level was three times the legal limit. When she woke up in a hospital trauma unit, Kishline said, she could barely remember getting into the truck.

The moral here is fairly clear: Moderation for alcoholics is a very dicey idea, and Kishline will no doubt go down in history as the best evidence against her own theory, the woman who single-handedly, spectacularly, caused it to crash and burn. The line between problem drinking and full-fledged alcoholism may be blurry and difficult to discern -- certainly it's difficult for the drinker to accept -- but once you've passed a certain point in your abuse, moderation simply ceases to be an option, a fact Kishline's critics have long understood. The very concept of moderation is oxymoronic in the world of alcoholism, and in abstinence-based circles like AA, her approach seemed not only deluded but dangerous, a form of codified denial that offered little more than false hope.

The hope, of course, is powerful: Most of us -- alcoholic and non-alcoholic -- want moderation to work. We want there to be an alternative to complete abstinence, which sounds like such a desert of self-abegnation and deprivation. This prospect -- no drinking, no alcohol-laced relief, never again -- ultimately turns out to be the great benefit of recovery, the gateway to the rediscovered self, but it's terrifying when you're still clinging to booze, and it's what keeps so many of us grasping for other options, desperate to believe that "normal" drinking is a possibility.

I don't know one recovering alcoholic who didn't struggle to control his or her drinking, who didn't make rules and then break them, who didn't set limits and make promises and deploy strategies to cut back, anything to avoid doing what the true alcoholic is so thoroughly loath to do: learn to live without alcohol. In the years before I quit, I tried drinking only after 8 p.m., I tried limiting myself to two glasses a night (which invariably turned into two glasses the size of buckets), I tried swearing off hard liquor and sticking to wine. The trials rarely lasted for more than a few days and they never worked; the nagging doubt -- "I cannot do this, I have a real problem" -- festered and grew. This is what makes Kishline's story so classic: Alcoholics are by definition failures of moderation, walking case studies in its impossibility.

Five years ago, Kishline's movement began to gain a certain amount of cachet, with full-spread coverage in Self magazine, Newsweek and the New York Times. (Self headlined it a "radical new approach" to alcohol treatment.) I was just about a year sober at the time, and still stunned by the vastness of what it meant to live without liquor, and I wrote a not-very-eloquent column about the movement, calling it, among other things, "moronic" and "bullshit." Today, far from feeling smug or vindicated by Kishline's very public fall, I feel humbled, and sobered, very much the way I feel when someone stumbles into an AA meeting after a relapse. This is a hideous story, one whose horror will only be compounded if we fail to learn from it.

And it has plenty to teach. There are obvious lessons about the dangers of moderation as an approach -- and they're important, timely ones, particularly in the age of medical cost containment, when insurers and healthcare providers are desperate to find quick and measurable fixes for complex and elusive problems. (In a bizarre twist of timing, just days after Kishline's guilty plea, a feud erupted at New York's prestigious Smithers Addiction Treatment and Research Center, when the director decided to steer the clinic toward a moderation-based approach.)

But there are also lessons in Kishline's story about the profound complexity of alcoholism, and the insidiousness of its grip, and the enormous challenges of treatment. Few of us can know what Kishline's past few years have been like, although we can certainly speculate about the horrors. Apparently, she'd given up the moderate approach prior to her drinking spree, and had tried unsuccessfully to stay sober through AA. Following her guilty plea, she went public about that, reversing her stance on the movement she helped found and stating through her lawyer that Moderation Management involves a lot of "alcoholics covering up their problem." She also talked, again through her lawyer, about the shame and humiliation of relapse, and about her profound remorse at causing the deaths of two innocent people.

You don't have to read too carefully between the lines to see how deeply and tragically alcoholic this narrative is. It's all there: the desperate struggle to find a way to hold onto alcohol, the failure first of moderation and then of denial, the horror -- and horrific consequences -- of relapse. Kishline will be sentenced on Aug. 11. Prosecutors are seeking a four-and-a-half-year term, although the maximum penalty is life. Judging her, of course, is the easy part. Learning from her is far harder, but the instruction is vital.

Caroline Knapp is the author of "Drinking: A Love Story." Her most recent book is "Pack of Two: The Intricate Bond Between People and Dogs."