The "survivor" who wasn't

Why wring our hands over reality TV? We ate up the life and death of JFK Jr. -- and what's wrong with that? 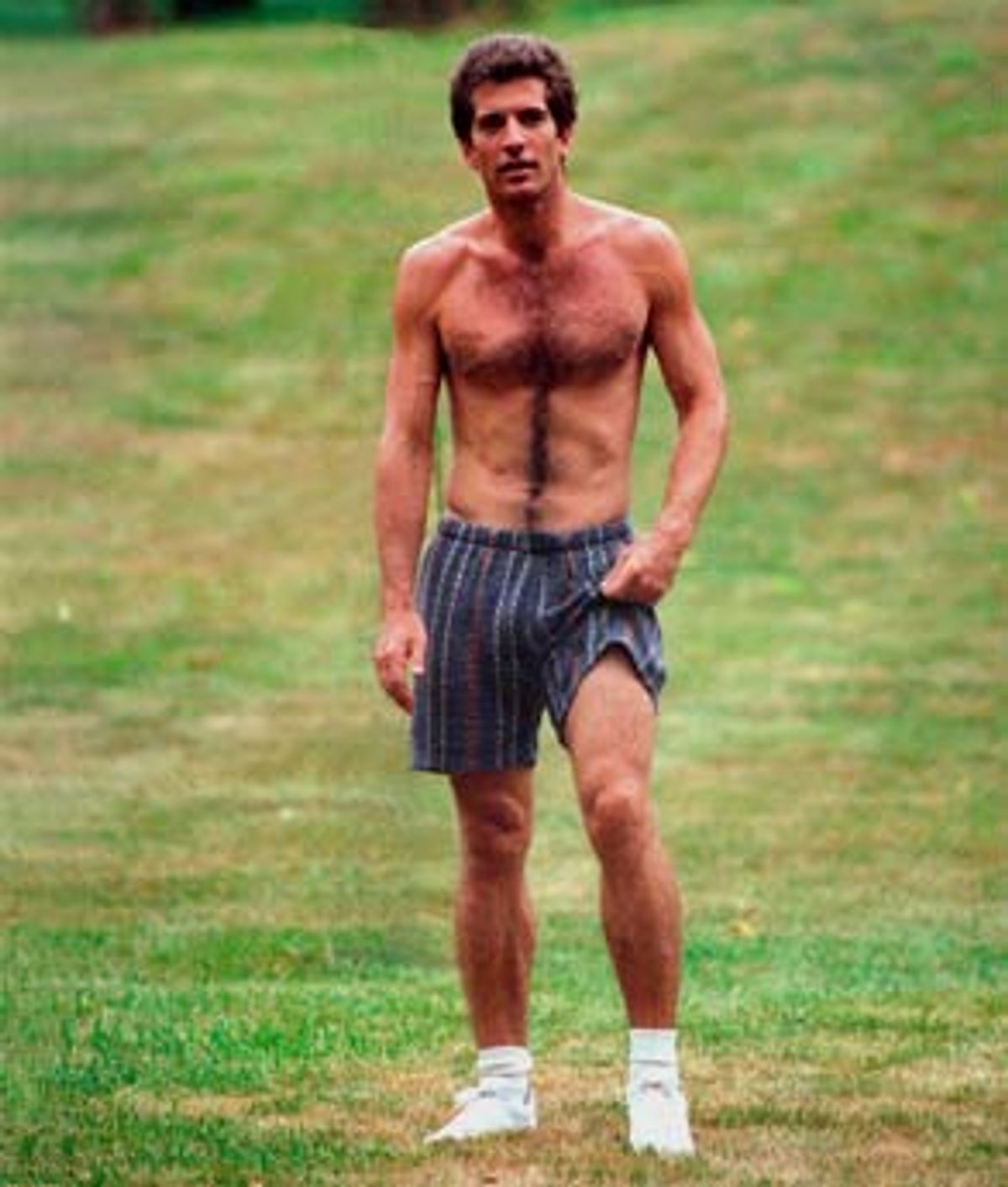 As journalists wax ever more outraged about the blurred boundaries between news, entertainment and so-called reality TV, along comes the anniversary of John F. Kennedy Jr.'s plane crash to burst the bubble of self-righteousness -- if such a self-reinforcing echo chamber as the media's self-righteousness were burstable, that is.

For two weeks last July, the world of journalism went into a graveyard spiral, having judged the crash, the search for wreckage, the recovery of the bodies of Kennedy, Carolyn Bessette and her sister Lauren, and finally their funerals the world's biggest news. I know; I was there. No theory about the cause of the crash went unexamined, no Kennedy-Bessette neighbor went uninterviewed, no photo of JFK Jr. -- under a desk in the Oval Office, saluting his father's casket, posing nude in George -- went unseen.

Maybe that's why I find it hard to be scandalized now when CBS puts the latest "Survivor" castoff on its "Early Show" and dresses up the soulless Julie Chen and Ian O'Malley as "correspondents" on "Big Brother"; or when "real" journalists vie to be the one who reveals the real survivors before the shows do. Anyone with a shred of awareness knows that the line between news and entertainment was erased long ago by the genres of celebrity, culture and "lifestyle" reporting -- and despite all the hand-wringing, it's really not cause for culturewide self-loathing.

And anyone who thinks CBS invented reality TV -- or stole it from MTV or the Europeans -- missed the point of the Kennedy extravaganza last year. He may have been our first reality TV character, the "Survivor" who ultimately wasn't, his every developmental milestone captured by the cameras.

For 38 years, we watched it all: his birth, that salute, his Upper East Side childhood, the tousle-haired Brown University days, failing the bar, passing it, fighting with his girlfriend, marrying her, the George years and finally his demise. His greatest virtue, most eulogists agreed, was his grace and patience in the face of our unending curiosity about him, as if he understood, better than we did, how much we needed him, needed to watch him. He resisted the cruel retort of the fed-up celebrity to his relentless fans: Get a life.

Yet the fame took its toll, kept him caged and in some weird way wouldn't let him grow up or ultimately age. And let's be clear: Nothing conferred his "newsmaker" status besides his stunning looks and his father's presidency, which his father, by the way, attained thanks to wealth, looks, charm and a glamorous wife -- all of which seem more like the hallmarks of celebrity than democratic leadership. (I feel a harrumph coming on.)

So why is it worse that CBS creates celebrities out of real people -- people who volunteer for the curse/privilege -- and feeds them up for our consumption? (OK, one obvious reason it's worse: I'd rather look at Kennedy's beefcake than Richard's on "Survivor." Besides that.) And why are we surprised that we love to watch?

On "Survivor," at least, the questions are kind of interesting: Did the old people get kicked off first because of ageism, or because they were insufferable? Who's the Richard of your workplace? How and why did CBS pick such jive-ass black guys -- they make "The Real World's" Teck look like a mensch -- for both shows? "Big Brother" is more hideous: It's hard to know if Karen deserves pity or contempt for leaving her husband on national television, but the human curiosity is kind of irresistible.

In the end, it's all about us -- reality TV and celebrity news and on some days, the Serious Political News (remember impeachment?). Are we normal? Does everybody cheat on their spouse? Should we stay married; should we marry at all? How messed up are our kids? What do we value in the people around us: Hard work? Charm? Smarts? Would I salute my father's casket at age 3? Would I risk the presidency for an Oval Office blow job? Are we normal? What's normal?

I'm hooked on "Survivor" and less crazy about "Big Brother," but I defend the whole craze. And yet I'm not dumb about the downside: an utter lack of proportion about what really matters, in public and private life. We skip over the story about the coming holocaust of AIDS orphans in Africa to read the latest "Survivor" synopsis. Closer to home, lately I've felt like a character on a reality show myself -- "Dot-com Deathwatch!" -- as reporters feast on every detail about Salon's troubles: "The stock's down 15 cents! They've lost their CFO! They've got a new CFO! The stock's up 15 cents!" The stories purport to be about the trials of the new economy, but they're really about gossip and schadenfreude.

But I digress. (Or do I? Is it coincidence it was CBS that wanted to do a magazine segment on Salon?) We're only human; this is what we care about.

During the latest media maelstrom, the Elian saga, I found myself on TV (It's the law: Every third American gets to go on TV during these big national news stories; that's what's so democratizing about them) telling reporters that Elian was a more defensible story than the JFK Jr. feeding frenzy, a little less sick-making, because it touched on bigger themes: post-Cold War geopolitics, U.S.-Cuba relations, immigration law, fathers' rights, family life, Janet Reno.

It was mostly bullshit. At bottom Elian was the story of a little boy who watched his mother die, and JFK Jr.'s was about a little boy whose father we all watched die. (And with all we know about him, do we know if he ever watched it himself, or are there some questions even journalists had too much taste to ask?) In both situations, we could not look away. And why should we?

I'm only a tiny bit embarrassed about indulging the nation's obsession with the story last year. But again, there is a cost to the lack of proportion. As President Clinton, Israeli Prime Minister Ehud Barak and Palestinian leader Yassir Arafat confab at Camp David to find a lasting solution to the Middle East crisis, there are no cameras outside. Nobody's talking about it 24/7 on MSNBC; neither the networks nor the cable shows, to my knowledge, have ginned up on those logos and ubertitles that let us know we're watching a Big National Story -- going back to "America Held Hostage"; "The Columbine Massacre"; "JFK Jr.: Death of an American Prince."

Nobody's interviewing Barak's neighbors or Arafat's college pals. Nobody's gossiping about the state of their respective marriages, only (as ever) the Clintons'. And, of course, the Bessette-Kennedys'. On Friday morning MSNBC featured a report on whether the pair would have divorced had they lived.

So I'm going to stay away from the news shows this weekend. A year later, Kennedy's still dead, and it's past time that we looked away. I'm going to watch "Big Brother" instead.