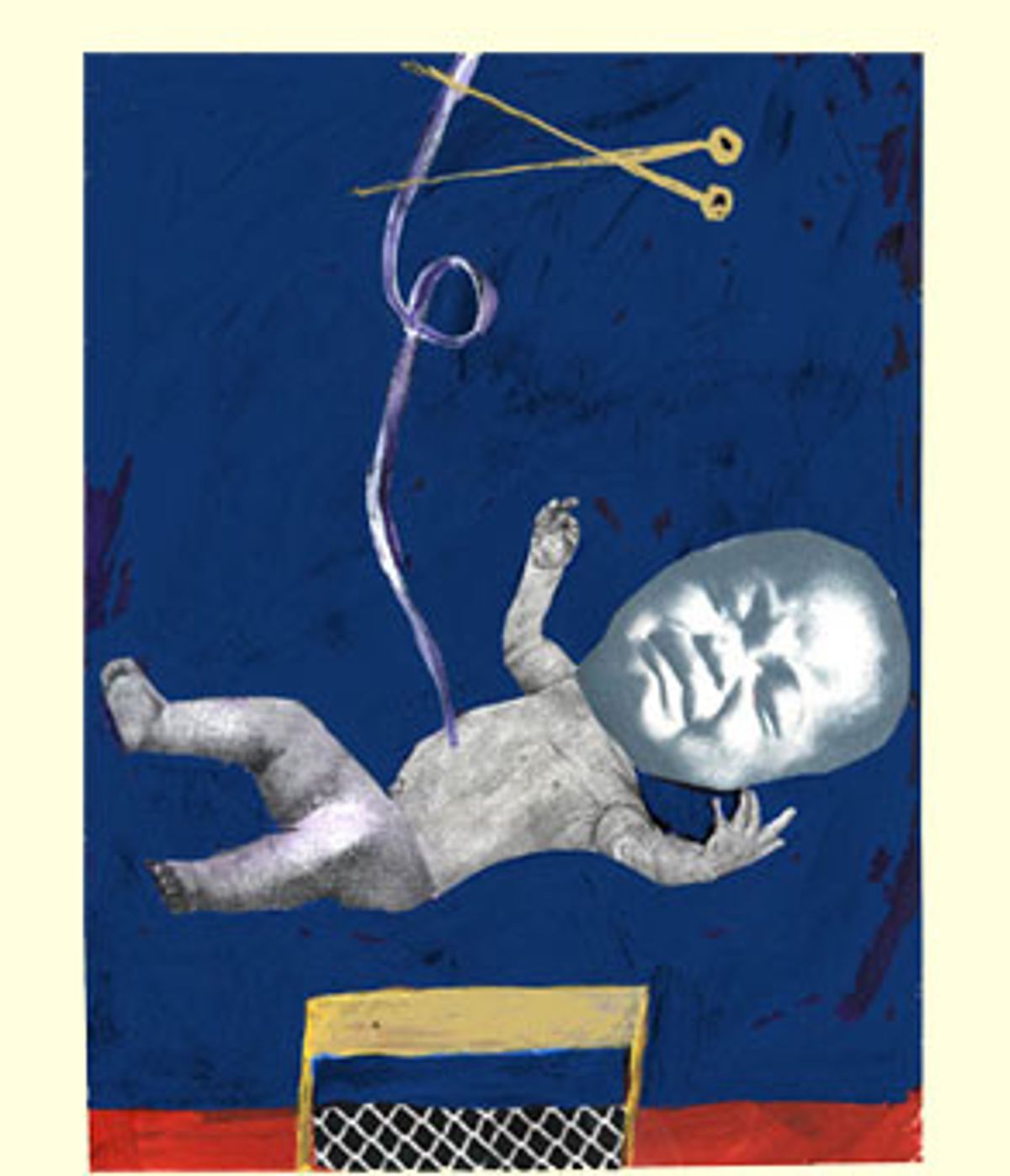 First we were told to bury the placenta in the backyard under a full moon -- unless we were willing to dice it into a risotto and share it with our closest friends. Now my husband and I -- awaiting the birth of our second child -- are informed of the miraculous new properties in the afterbirth. Now we are supposed to put it in a private "bank" as medical salvation for our unborn child.

As a person who only reads baby magazines in the obstetrician waiting room, I had remained ignorant of the brisk new business in umbilical cord blood banking that had sprung up since my last pregnancy. Suddenly I was the bloated target of ads promising "biological insurance" for a mere $1,500 plus $100 per year in storage fees. All I had to do, according to the Cord Blood Registry, was realize "why it is so important to store your baby's umbilical cord blood stem cells." Once I was with the program, I would need to decide whether to freeze this purported "gift of life" or simply waste it. (It was, it seems, less a choice than a matter of life and death.)

A little research revealed that a dozen for-profit companies (Core Blood Registry is the largest) have persuaded at least 20,000 families to "bank" their baby's cord blood in the past few years. This is hardly surprising given the potent emotional weapons these firms have at their disposal. While some have had the integrity to admit that the science involved is experimental, and that private cord banking is of dubious value to the vast majority of parents, all of them effectively exploit new parents, cashing in on our fear of the unknown, our quasi-mystical belief in the powers of science and our inexplicable belief that we can, if we do everything right, insulate our children from harm.

My first, albeit mistaken, impression was that these "stem cells" were fetal cells that might, in the year 2050, say, be used to generate a new kidney or lung out of a petri dish for our son. Such fetal stem cells do exist, and research in this area has provoked vigorous and ongoing ethical debate.

Cord blood, however, contains stem cells for the body's blood and immune systems only. These cells are the building blocks for red and white blood cells and platelets and appear to have some promise in providing an alternative to bone marrow transplant.

What are the chances we would need this blood for our son or his older sister? According to the New England Journal of Medicine, virtually nil. The odds of a family with no history of blood disease needing such cells are one in 20,000 over 20 years. The only case in which it makes sense for a family to bank placental blood is when an older sibling already has a blood disease or there are strong genetic or environmental reasons to believe the family is at higher risk for one. In such high-risk groups, the match of the cord blood to a family member who may need the transplant is one in four and worth pursuing, doctors agree. (The few transplants conducted with cord blood to date all have involved families with histories of leukemia or other blood disease.)

Claims that our son's cord blood could benefit him -- presuming he eventually developed childhood leukemia -- are simply specious. What would be the point of transplanting into your child the very same cells that gave rise to the disease in the first place?

But what if? What if our daughter contracted leukemia and we had not chosen to freeze her younger brother's potentially lifesaving cord blood? Would we not hate ourselves? How far are we -- how far are any reasonably prosperous and concerned parents today -- willing to go to hedge against even the wildest eventuality?

Unfortunately, we live in an era when "the best for one's child" is on its way to becoming the worst kind of alibi. Because we can afford it, we turn our backs on collective solutions to human needs -- in education, in health -- choosing instead private, for-profit solutions that guarantee a better outcome for our individual child. No one can blame a parent for such feelings, yet the trend is deeply troubling.

In the cord-blood debate, the battle lines between public and private are clear. Our obstetrician and pediatrician were obviously uncomfortable with the topic. Although one referred us to the hematology division of a local hospital, another admitted that there was discord among doctors over private cord-blood banking, which many view as an entrepreneurial (read: opportunistic) phenomenon.

The American Academy of Pediatricians is more direct. It calls private storage "unwise"; the resident ethicist at the New England Journal baldly calls private cord-blood banking one in an increasing number of "schemes to transform medical waste into profit." Their unreserved advice: Donate your cord blood to one of the public cord-blood banks being established by the National Institutes of Health. There may not be one near you yet -- there isn't one near us. But one day there will be, giving everyone, including hard-to-match minority patients, not just yuppies with prenatal angst and disposable income, access to the blood cells they need to save a child's life.

Alix Christie is a reporter and former editor of the foreign service of the San Francisco Chronicle.