"I played a risky game" 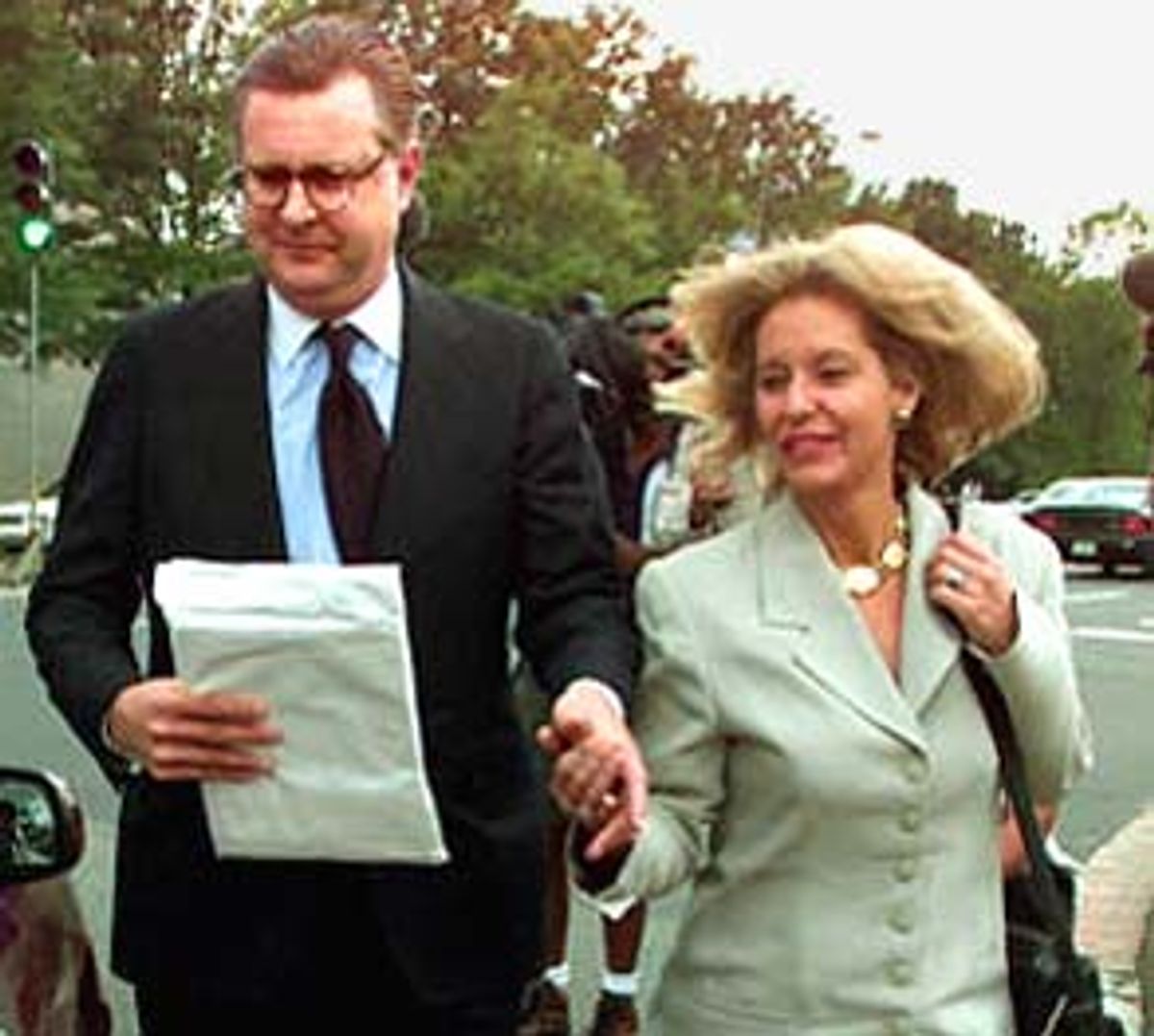 It's inevitable that any trial relating to Ken Starr's investigation of President Clinton is going to feel more like a truth and reconciliation commission proceeding than a criminal matter. That has been the feeling this week in Washington's Federal Court of Appeals as journalists, lawyers and family members crowd into Judge Norma Holloway Johnson's courtroom to hear the case of U.S. vs. Charles Bakaly, Starr's spokesman, charged with criminal contempt of court.

As it turned out, the light shed on the much-speculated-upon leaks from Starr's office was far more revealing than the legal hairsplitting over the actual charges leveled against Bakaly.

Bakaly, the Justice Department contends, passed information from the Starr investigation to the New York Times and then lied about his role in leaking the information during a subsequent investigation. More egregiously, it appears, Bakaly leaked the controversial information at a time during Clinton's impeachment trial when some senators had not yet decided how they would vote, creating the appearance that someone within Starr's office might be trying to manipulate the media to sway Congress.

But he's not being tried on those leaks. A federal appeals court has already ruled that, althought it found statements in the story "troubling," the Times article at the center of the controversy contained no grand jury secrets.

The current case instead hinges on Bakaly's original declaration in the investigation, in which he said he "declined to discuss non-public matters" of the Office of the Independent Counsel (OIC) and Ken Starr's thoughts or actions with Times reporters -- a declaration that was retracted by Starr's office after Bakaly admitted to FBI investigators probing the leaks that he may have "inadvertently confirmed" information in reporter Don Van Natta's Jan. 31, 1999, article.

That makes the Justice Department's case a little less defensible. If not to draw attention to leaks within Starr's office, why did Judge Johnson permit this highly technical case that looks like a lot of dead-horse beating to move forward?

Bakaly's criminal contempt-of-court charges stem from an investigation of the Office of the OIC that was called by Johnson after the publication of Van Natta's story, which alleged that Starr had concluded he had the constitutional authority to indict Clinton. The explosive news -- though whether it was dynamite or a firecracker was the subject of great debate during testimony in the case on Friday and Monday -- led Clinton's defense lawyer David E. Kendall to cry foul and Johnson to launch an investigation.

On the stand Monday, wearing a navy blue suit, blue shirt and white collar, hair slicked back and wavy, Starr's towering former spokesman and longtime Republican insider admitted he had been a source of leaks in a New York Times article that sought to outline the role of the OIC if Clinton survived his impeachment trial. In testimony, Bakaly said he was an unnamed Starr associate quoted in part of Van Natta's story, but he denied having misled Judge Johnson in his original sworn statement in her 1999 investigation of the leak.

The documents he gave the reporter included the so-called "Bates Memo," an analysis of Watergate-era prosecution strategies by Watergate special prosecutor Leon Jaworski written by Stephen Bates. There also were excerpts from Starr's testimony before the House Judiciary Committee and excerpts from the writings of Henry Ruth and James Doyle, who assisted Jaworski in researching the case against President Nixon. Bakaly argued that they were already public information, and that he "had not provided any grand jury information or any information about our intentions."

Still, he said, his release of the Bates Memo had "caused so much harm to the morale of the office that, in retrospect, I would have done it differently." In later testimony, he also stated that "the article was very bad for the office because it made it look like the OIC was injecting itself" into the Senate trial. Indeed, it would certainly appear that way.

He also put to rest the important question of whether it was Starr who put him up to the business of leaking to the Times. "I had very broad discretion ... It was misjudgment," he told the judge. Johnson is serving as both judge and jury, a practice that is permitted in federal cases carrying a maximum sentence of six months' imprisonment or less.

In its case, the government alleges that Bakaly was the source for the most damaging material in Van Natta's article, but the former spokesman said he did not tell Van Natta the key elements of the story: that Starr had come to the conclusion he had the authority to indict the president, or that a group of Starr's attorneys were advocating indictment. Van Natta, he said, told him he had obtained that information from sources outside Starr's office.

But Van Natta's remarks apparently set off red flags, and Bakaly testified that he "believed it could be potential grand jury information" and that he attempted to "steer him away" by questioning the reliability of his sources, and encouraging Van Natta to instead focus on the historical writings of Jaworski. Starr's office had been the subject of great scrutiny for its alleged leaks, and, Bakaly says, "We'd been through this for an entire year, and I didn't want another of these."

In stark contrast to Justice Department prosecutors, who seemed to want to focus on whether Bakaly leaked grand jury testimony, the defense sought to limit questions to the development of Bakaly's original declaration, which was drafted by Don Bucklin and Andrew Cohen, outside attorneys hired by Starr's office.

Lead defense attorney Michele Roberts directed a line of questioning that sought to establish that Bakaly had been open with Bucklin and Cohen, and that it was they who chose to limit the scope of the statement issued to Judge Johnson and not include the fact that Bakaly had provided Van Natta with a copy of an internal memo from Starr's office. Bakaly said Bucklin and Cohen also omitted changes he tried to make in the declaration that would have said Van Natta obtained information from sources outside Starr's office.

Van Natta's article also revealed the debate of a January 27, 1999, meeting, in which Starr attorneys discussed the options available to prosecutors in considering the Clinton matter. Though the Bates Memo that Bakaly had faxed to Van Natta included information used to consider these options, defense attorneys described the prosecution strategies as "garden variety" conclusions any reasonable person would come to and, therefore, public information.

In Monday's testimony, defense attorney Roberts introduced into evidence newspaper and magazine articles indicating that that information had been published prior to the Times story -- another of the story's "smoking guns" removed.

Bakaly also said that when he first cooperated with FBI agents, he thought he was genuinely helping out with the investigation, but there came a time when he "began to believe they saw me as a suspect rather than a witness."

In a particularly tense moment of cross-examination, Bakaly told prosecutor John Griffith, "I don't lie to reporters." Just a few minutes later, prosecutors showed a videotape of Bakaly's appearance on "Good Morning America" the day after the Times published Van Natta's article, in which he stated he hadn't provided any information to the reporter. When asked to explain the apparent contradiction on the stand, Bakaly said that in his "Good Morning America" interview, he meant that he had not been the source of grand jury information.

"I'm thinking only about [a grand jury] at this point," he answered. But, as Griffith suggested, Bakaly had been asked a broad question that he answered falsely.

Later, Griffith asked Bakaly if he had told Starr or other OIC attorneys that he had provided Van Natta with the Bates Memo. He said he hadn't.

But the technical aspects of the trial were less interesting than the slice of life it offered from Bakaly's role on Starr's staff.

The trial offered a fascinating look into the way Bakaly cultivated relationships with the media. On a very busy day, Bakaly said, Starr's office would get as many as 100 calls from reporters -- 50 to 60 of which the spokesman would answer himself. Bakaly was in charge of representing the office to major national print publications, cable news channels and international publications, and he said there were days on the job when he shared every meal with reporters.

But at no time, Bakaly testified, did he supply reporters with what he believed to be grand jury information. He also admitted to telling FBI agents he thought reporters were "lazy" and that they "needed to be fed information."

Before resting its case Friday, the government called a handful of FBI witnesses. They described interviews with Bakaly in which he discussed attempts to steer Van Natta's reporting by meeting with him for breakfasts at the swanky Willard Hotel near the White House at least three times, and by talking to him on the phone dozens of times.

In testimony on behalf of the government, FBI Agent Thomas Lewis said Bakaly told him he had been very concerned about the way Van Natta would source any information he had supplied him with -- Bakaly didn't want anything to appear as though it had come from inside the OIC.

"Don't burn me on this, don't kill me on this," Lewis said Bakaly had told Van Natta. When Bakaly received a faxed copy of the article the day before it was published, he felt "sick" and "betrayed."

"I played a risky game and got burned," he allegedly told Lewis. "Every time I see 'associates,'" Bakaly apparently said, "I believe he's referring to me."

"I would be disbarred and prosecuted because of what I told you here today," Lewis said Bakaly told him.

He also told FBI interviewers that he may have "inadvertently confirmed" some of the information in the story.

Starr then referred the inconsistencies between Bakaly's original statement and his interviews with FBI investigators to the Justice Department, leading Bakaly to resign and resulting in the current charges.

The government sought to depict Bakaly's words as a confession that he had given the goods to Van Natta, with one agent even testifying that Bakaly said he "regretted" the move. The defense argued that he was speculating what Van Natta might have perceived from his words. In other words, "If Van Natta took it as confirmation, it was inadvertent on my part."

Defense attorneys, however, said Bakaly didn't mislead Judge Johnson and laid the blame for the statement in question on the Starr attorneys who drafted it. They also argued that, contrary to the picture painted by prosecutors, Bakaly was a helpful source in the investigation. He gave proof that several quotes in the article attributed to "associates" came from him; he also told FBI Agent Michael Erbach he had sent Van Natta a copy of the Bates memo and that portions of that memo had found their way into the article. In other words, he was a willing witness, ready to aid the agents in their investigation.

Closing arguments were given in the case Tuesday afternoon, and Judge Johnson asked both sides to submit written arguments by Aug. 11. The judge will then issue a verdict on Bakaly's contempt of court charge.

If convicted, Bakaly could face up to six months in prison. Whatever the trial's outcome, it has yielded one of the most important revelations about the Bakaly leaks yet: Contrary to previous statements by Starr and his staff, Bakaly's testimony shows that the office did, in fact, leak internal information to the media at politically strategic moments during its investigation of the president.