If the drug can do for monthly mood swings what it is said to do for depression, bring it on, baby! 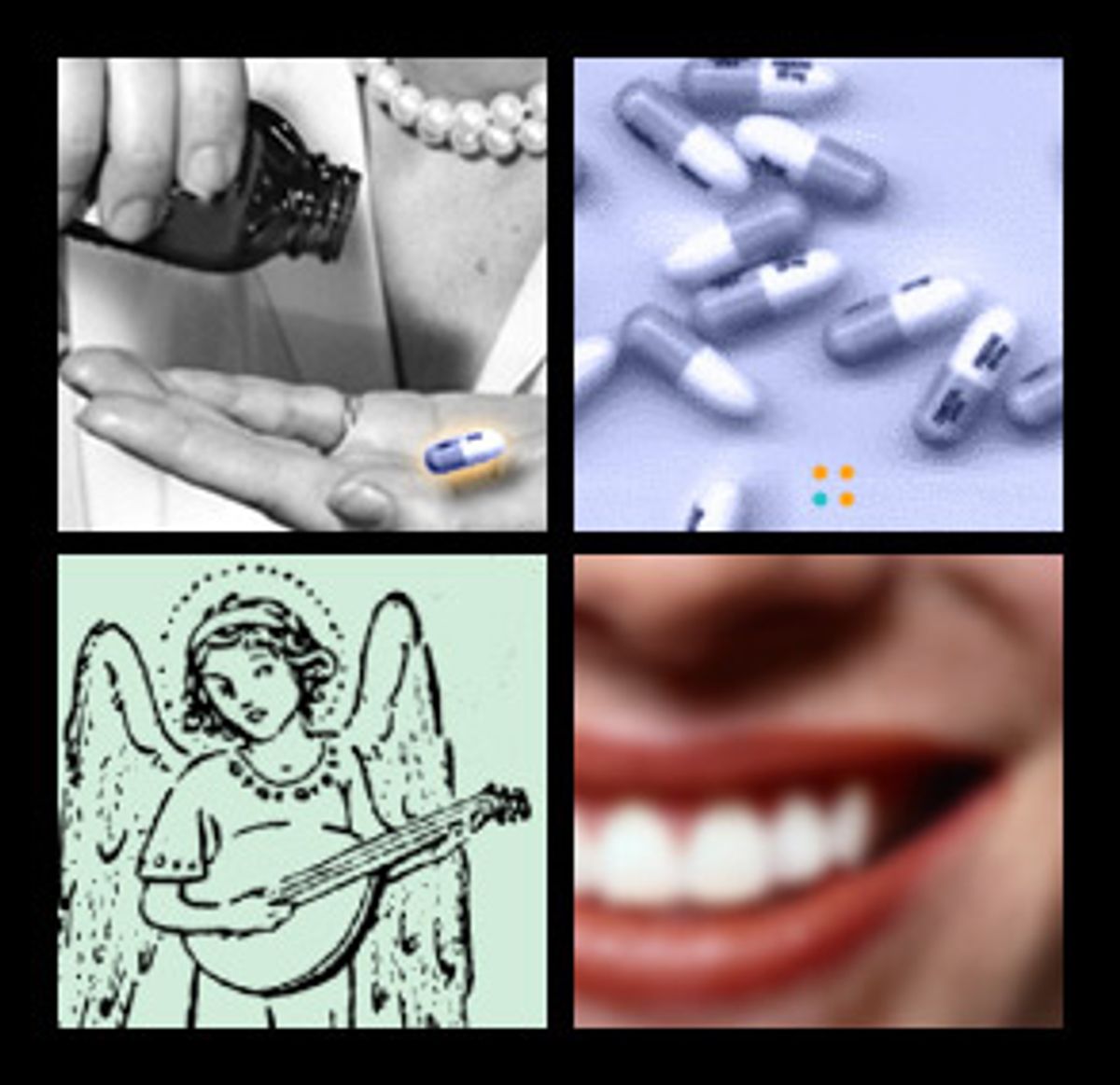 A: What's the point? They act that way all the time.

Q: What does PMS stand for?

A: Putting up with Men's Shit.

Lighten up, girls. The news that the FDA earlier this month approved the use of Prozac to treat severe symptoms of PMS struck me as one of the great leaps of modern medicine, right up there with penicillin and Dramamine. Premenstrual syndrome has been the bane of women (and men) since Cleopatra. How else to explain the queen's wild rants and mood swings, going from the world's hottest seductress to the baddest bitch west of the Nile?

Is it any wonder that the fiercest female pro-wrestling tag team in the WWF goes by the name PMS? The two wannabe Xena warrior princesses seem to symbolize their PMS-afflicted sisters everywhere. When interviewed by TV announcer Michael Cole, Terri teasingly began to disrobe Cole, then Jackie kicked him in the groin.

Prozac is a wonder drug. If it can do for PMS what it is supposed to do for depression, then bring it on, baby!

But what about gender equality? If a woman gets cranky, she can always blame PMS. When a guy gets moody, it's evil testosterone surges or his macho-flawed personality. Now, women get to take a pill, leave the dishes in the sink, say hasta la vista to Jason and Jennifer arguing over who's going to get voted off the island on "Survivor," and then soak in an herbal bubble bath while inhaling scents from citrus, rose-petal and almond candles.

Maybe it's a way to get back for Viagra.

As anyone over 16 should know, PMS can be characterized by extreme, often irrational behavior that includes eating binges, sudden anger, irritability, impulsive behavior and the desire to punch somebody (anybody) out. Many men report a snapping, snarling nature that seems to take over their usually simpatica mates for anywhere from one to two weeks before the monthly onset of menstruation. Wise husbands and boyfriends know never to assume -- or at least, never to say -- that PMS is the cause of their partners' rank moods. It is not a good idea to ask in the middle of an argument, "Hey, what gives? You got PMS again?"

To help cope, there used to be Midol. (A no-brainer: Midol was a subliminal message to mean "My Doll.") But that was ineffective for anything but mild cramps.

Several years ago, husband-and-wife scientists at MIT came up with a powder drink they trademarked as PMS Escape. The potion contains carbohydrates and vitamins that its makers said helps PMS sufferers cope with the carbo cravings and precipitous plunge in brain serotonin levels that many women experience during the weeks before menstruation.

The first randomized, double-blind, controlled trials of Prozac on women with PMS were done at eight Canadian hospitals in the early 1990s, and reported in the New England Journal of Medicine in 1995. The results were staggering: The 313 women who took Prozac showed four to six times more improvement than those who took placebos. In other clinical trials, 75 percent of women showed improvement with Prozac or similar drugs.

Since then, many physicians have prescribed Prozac (and other antidepressants) off-label for women with severe PMS. All that was missing was the Food and Drug Administration's formal approval so that Prozac's manufacturer, Eli Lilly and Co., could niche-market the world's top-selling antidepressant directly to premenstrual women. That approval came July 6, when the FDA formally cleared Prozac as a recognized PMS treatment.

So that it can jump-start sales and distinguish the PMS therapy from the antidepressant, Lilly will not call the PMS product Prozac, but rename the identical compound Sarafem.

How's that for feminine-sounding? I can see the TV ads: earth tones, Martha Stewart-style scenery, close-up of doting but obviously preoccupied mother (Joan Lunden lookalike) with child (girl) in designer kitchen (sub-zero refrigerator, Corian countertops, GE Profile stovetop), voice-over of caring doctor (female) gently hawking Sarafem ("for those times of the month when women need something extra") and a fade to twin smiles while kneeling and removing steaming cake from oven.

To complete the makeover, the new PMS drug will not come in Prozac's signature capsule of lettuce-green and cream colors, but in dreamy, comforting lilac-and-blue. Sarafem should be in pharmacies next month, says Lilly spokeswoman (of course) Laura Miller.

The road to Sarafem has been marked with potholes. Even though doctors in the fourth century B.C. identified symptoms of PMS, it took until 1931 before New York gynecologist Robert T. Frank officially brought it to the attention of the medical establishment. He called the condition "premenstrual tension." In 1953, two English physicians, Katarina Dalton and Raymond Greene, labeled the condition "premenstrual syndrome," when the British Medical Journal published the first paper on the subject.

PMS gained fame (and became a great topic for Johnny Carson jokes) in 1980 in a widely reported trial in which the sentence of a British woman accused of murder was reduced because she claimed she was suffering from PMS. In 1994, a Virginia woman argued in court that when police arrested her for erratic driving, it was not due to alcohol but to PMS. She was acquitted of DWI.

(Note to myself: Figure out whom, or what, I can blame next time I rear-end the Dodge minivan in front of me while I'm rocking out, listening to the Dead on my car radio, and my foot slips off the brake.)

In 1997, the same husband-and-wife research team that concocted PMS Escape, Richard and Judith Wurtman, were granted by the FDA a method-of-use patent on Prozac to treat symptoms associated with PMS. Through a sublicensing arrangement with a company the Wurtmans founded, Interneuron Pharmaceuticals, Lilly today retains rights to manufacture Prozac as a PMS treatment.

The usual dose for PMS relief is 20 milligrams a day, the same maintenance dose that most Prozac users take. PMS sufferers report the effects can be felt within 48 hours, while it can take as long as a month for Prozac and similar drugs to work against depression. Women who take the drug for PMS often can limit their intake just to the days when PMS hits the hardest, say the researchers.

Prozac (along with Zoloft, Paxil, Luvox, Effexor and Celexa) belongs to a pharmacological family called SSRIs, selective serotonin reuptake inhibitors. Serotonin is like mind candy produced by the brain (and it's legal): the more serotonin, the greater the sense of well-being. SSRIs allow the brain's receptor nerve cells to continue to bathe in this soothing nectar.

There's a price to be paid for such bliss. Side effects hit as many as 75 percent (depending on whose statistics you believe) of those who take the drug. They include agitation, insomnia, nausea, headaches and a marked drop in libido. But going without sex may be a small price to pay for being rescued from PMS hell. And how many women in the clutches of PMS want to have sex anyway? And how many (non-masochistic) men would want to have sex with them?

Judith Wurtman, the MIT cognitive-brain scientist, puts it this way. Referring to studies of women with severe PMS, she said: "Serotonin gives a sense of vigor. It took away apathy, that blah feeling. It took away agitation, anxiety. It took away impulsivity and carbohydrate-eating binges. Women in the study could now recall things such as where they put their keys, whether they turned off the computer. It raised their self-confidence."

Like anyone else in the workplace, Wurtman easily recognizes the PMS-strafed woman aka bitch on wheels. "A female boss who praises her workers three weeks out of the month, then berates them when she has PMS, takes a tremendous toll on everyone in that workplace."

And at home. "A mother who is sometimes placid and sometimes a raving maniac makes a child wonder about the stability of his world," says Wurtman.

Personally, I am very glad Wurtman is not a man, saying all these horrible things about women.

The extreme form of PMS is called premenstrual dysphoric disorder. In up to 8 percent of premenopausal women, the condition is serious enough to rupture their lives and their families. Women between the ages of 25 to 34 are more than twice as likely to experience PMS than women 35 to 44. Menstrual cramps, by the way, are not considered part of PMS.

The federal judiciary has cleared the way for PMS to be classified as a disability, and (as such) a condition potentially protected under the Americans with Disabilities Act. Barbara Cavuoto, a payroll manager at Oxford Health Plans Inc., said she was excluded from senior management meetings at the Trumbull, Conn., company because of severe PMS, a condition about which her supervisor was aware. A federal district judge in Connecticut on June 22 ruled that a jury could determine whether Cavuoto's employers broke the law.

It is probably no surprise that Prozac has been approved for sale as PMS therapy. Prozac and other SSRIs have become like utility infielders. In addition to depression and now PMS, physicians often prescribe the drugs for panic attacks, anxiety, binge-eating, bulimia, obsessive-compulsive disorder (OCD), seasonal-affective disorder (SAD) and even something called CSD (compulsive-shopping disorder). The last "disorder" is not a lame stab at Rodney Dangerfield humor: Stanford University researchers are conducting a study of 24 shopaholics, all women, to see whether SSRIs can curb their wanton spending habits. The study is not being underwritten by the women's husbands.