On the "Big Brother" Web site, you can watch 24/7 -- and get a glimpse into a much different world from the TV show's. 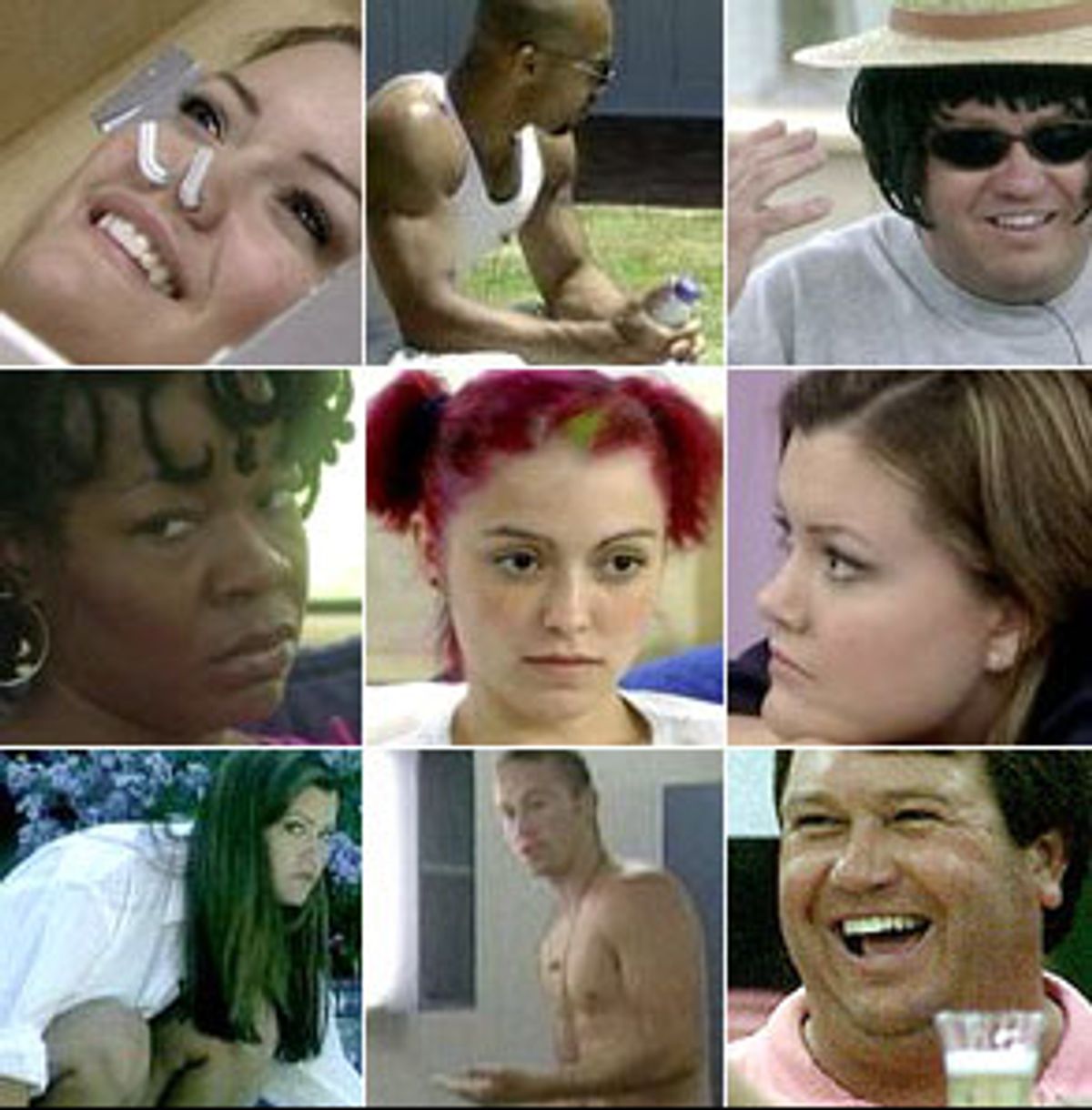 Jamie, the beauty queen, was doing the math for Josh last Friday at the picnic table:

CBS was planning to run four original "Big Brother" house half-hour segments a week, at 22 minutes each. There were 10 residents; it followed that the most air time each could expect out of their seven thoroughly filmed 24-hour days was a notch over eight minutes: Ten, if they're lucky.

Of course, there's also the live Thursday-night episode, and a lot of the time more than one resident is onscreen. Still, Jamie, who has not told her housemates she graduated with a 4.0 average, had a point. CBS is generating hundreds of hours of footage a week out of the house, and only a tiny fraction is actually being broadcast. A lot of people have figured out that "Big Brother" is best seen not as a television program, but as a 24/7 cluster of webcasts with a sometimes illuminating, sometimes obfuscatory televised adjunct.

Take the hours-long game of Truth or Dare the housemates played late last Wednesday night. CBS ran only a fleeting clip. The announcer said the first question was directed at Jordan, the triathlete and former stripper. George, the genial blue-collar dad, asked her who she was attracted to when she first entered the house, and we saw Jordan reply, "Two women and two men, and one of the names is Brittany."

The broadcast told a lie: Jordan was far from the first person questioned. CBS made George's interest in her predilections look pretty dodgy, where in reality George hadn't even heard of the game before he was asked if he'd ever cheated on his wife. (He didn't even have to consider the Dare component: George, you'll be relieved to hear, has never cheated.) He came up with the attraction question because it had already been used by others.

You also didn't see Jordan go through what must have been a 15-minute negotiation process, trying to whittle the question down into something she was willing to answer. She avoided answering a male name, except for cheerfully saying that she was no longer attracted to outspoken William, now that she saw him as a friend -- she tried to get off the hook with that non-answer but the housemates insisted she answer some version of the actual question.

Jordan then was careful to broaden her definition of "attraction" as widely as possible for the answer she gave. Since then, she's explained to virtually every other woman in the house that when she says she finds women attractive, she's not saying she's "a total bisexual." The actual Truth or Dare session revealed a Jordan more insecure, self-concealing and manipulative than Jordan herself seemed comfortable with.

If you just watch the show on television, you also didn't see why "Naked trampoline!" has become a house catchphrase. You didn't see unhappy housewife Karen asked by self-professed black role model William about the time and circumstances of her first orgasm. The penalty for non-answer would be to hand over her cigarettes to William. ("Now that's how you play Truth or Dare," he said to George.)

Karen, the mom, embarrassed, told a story of being "fingered" in the front seat of her senior boyfriend's car, in her driveway, when she was a sophomore: The next day she said that had been a lie. "A lie? I didn't know we could lie! I would've lied!" cried little magenta-haired Brittany (who has made a lot of money in the stock market, and rents out half the duplex she owns -- did you know that?)

"I needed my cigarettes," Karen said.

Meanwhile, Karen and George, the house elders, went outside during the second round and talked about the importance of witnessing your faith. (She thinks people could go to hell if they don't; he's less worried that God would do that.) Eddie is the only person in the house who doesn't seem to be religious (lost his faith when he lost his leg). That's one of the unexpected questions "Big Brother" has raised for me: Is this representative of the amount of religious discourse among most Americans?

The media-savvy housemates wonder frequently to each other what's going out on the Internet, and what's being edited into television. They have little to go on -- just a few ideas from the featurettes the show created to introduce them to viewers on the premiere episode. Brittany, it turns out, felt odd being filmed going to church: She's a spiritual person, but she doesn't attend church. When Cassandra, the thoughtful U.N. worker, told Curtis, the young All-American Asian lawyer, that CBS had wanted to shoot her inline skating (she means to take lessons and in the meantime "didn't want to look like an idiot" skating awkwardly), he said, "They were desperate for Rollerblading! They asked me to skate for them."

They're guessing wrong about the Internet feed, though. They think we just get one long shot per room on our computers. When they leave, one by one, they'll see we're getting everything, including close-ups, edited in real time.

(Actually, instead of that, the network showed a short clip of William massaging her foot in a dark room, via infrared photography. They've also shown footage making it look like there's chemistry between her and Josh, though if they'd shown more of that kitchen conversation, you would have heard her tell him, "I'm not going to hook up with anyone in this house" in a tone any woman would recognize as the diplomatic way of saying, "I'm not going to hook up with you.")

While CBS, since the stressful first vote, has focused on William's vengeful throwing of the Dead or Alive food-budget wager, Internet voyeurs know the biggest effect on the house was Jordan's insistence that everyone aid her personal growth by telling her exactly why they voted her out.

Curtis, the young Asian lawyer, noted that a nomination took only three votes -- "You all voted me out" was probably an exaggeration. (Curtis has said, "As a lawyer, I'm conflict-averse.") Diplomatic Curtis and Cassandra, who works at the United Nations, convinced the others that they shouldn't talk about something so artificial and forced as the vote. Unhappy Jordan went back and forth for days -- from saying she's come to terms with the vote to prodding the other women into telling her. Internet voyeurs can only be relieved, now that she's told the group about her stripper past and apparently made up from a fight with Brittany ("I can tell you really want to tell me"; "You don't respect that I gave my word"; "You're just shallow, going along with the group!"), that she might be able to move on to other topics of conversation.

CBS is looking for conflicts and sexual tension. (The latter has been strangely subdued so far, notwithstanding the activities of Brittany, a self-confessed "cuddle slut," and of touchy-feely Josh.) So you haven't seen one-legged Eddie's humorous protectiveness of the older housemates. He did a hilarious cooking-show parody making bread with George last week. (The housemates have found that cooking, making bread and doing laundry by hand, all of which take up a lot of time, can be very companionable activities.)

"Tell 'em how many miles you can get on a fruitcake, Eddie."

"Tell 'em about the tread on a fruitcake, Eddie."

"Now we gotta let it rise for an hour. This would be a perfect time for a beer, but we ain't got no beer! So we'll have water. Do you have frustrations, Eddie?"

"What're you gonna do if you have frustrations, Eddie?"

"I'm gonna give that dough a right cross and a left upper-cut."

Eddie swapped his bed for George's upper bunk when he thought George was shaken by William's "intimidations" from the lower one. Eddie's also a tonic for Karen, whom he often hangs with, playing Frisbee or listening to her venting frustrations. He says, "Don't be a hater, Karen!" which makes her laugh at his exaggeration of her mild complaints. It's become his pet name for her: "How's it going, Hater?" he'll call to her when she comes into the yard.

Brittany sometimes calls Karen and George Mom and Dad, and George often calls her My Young Child. The other night, he was worrying in the bathroom that he was out of place in a young crowd. "It's totally awesome that you're here!" Brittany assured him. She's promised to take him to Burning Man, and George is psyched by that.

They haven't been there long enough to forget the cameras. The wall-mounted cameras make noise when they pan or zoom, and the housemates sometimes wave at them or point it out. "Hi, it's me, the total spazz," Brittany told the bathroom camera after her fight with Jordan.

Curtis was talking about it the other day as he made bread in the kitchen with Cassandra: "My friends told me they'd have the Internet on 24-7. How boring is that?"

William, at the kitchen table, said, "Masturbator!" and giggled.

Two weeks in, the difficulty isn't the food, or having to do laundry by hand, or the cameras in the showers. It's the housemates' realizing they have very different ideas of how people relate to each other, the clearest divide being between William and Jordan, who both want Serious Conversation (him about social issues, her about Personal Growth), and most of the others, who are more comfortable just chilling. (Cassandra and Curtis try to bridge the gap.)

Martha Soukup is a Nebula-award-winning science fiction writer. Her new short-story collection is "The Arbitrary Placement of Walls." She does her daily eavesdropping in San Francisco.