New research suggests that people learn while they sleep. 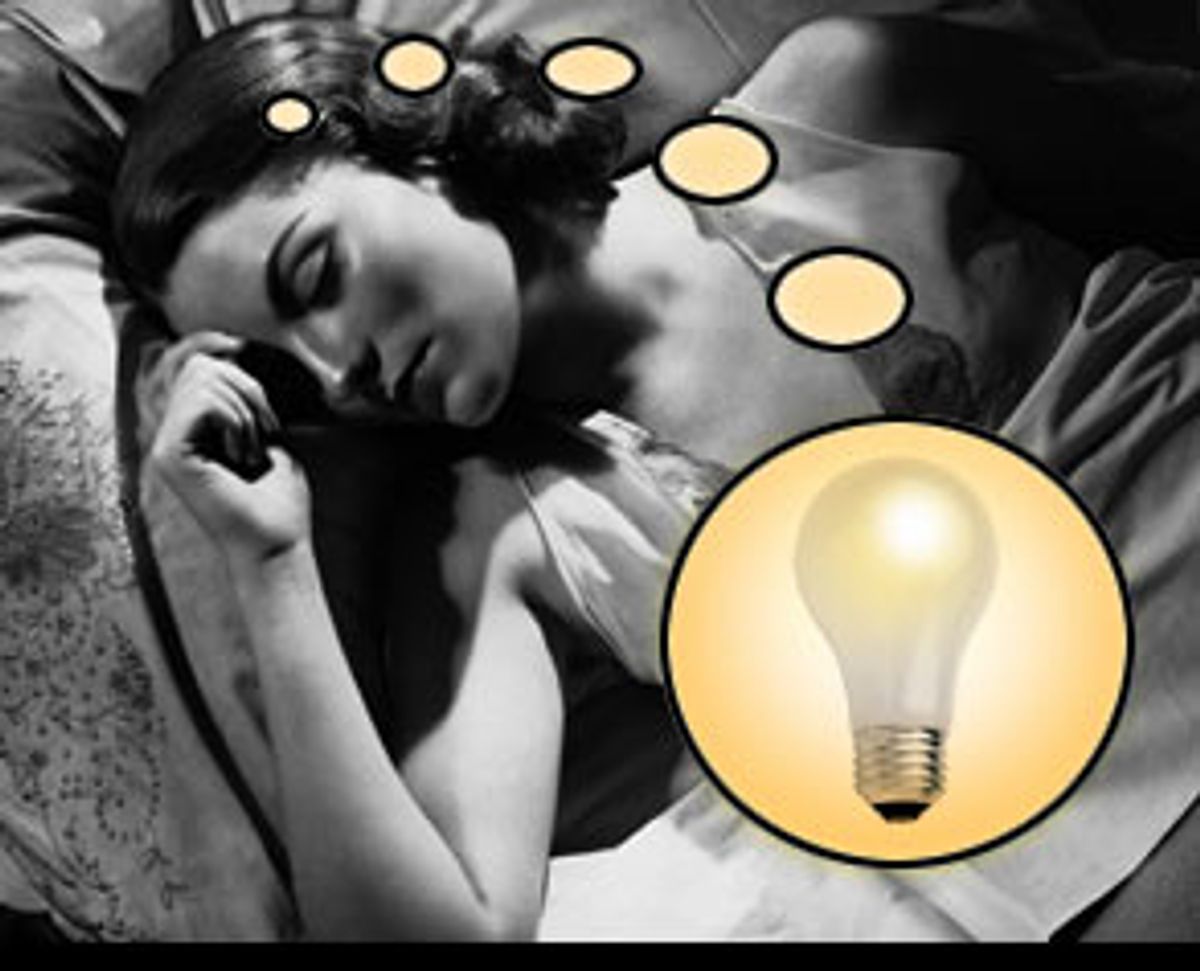 We interrupt the centennial celebration for "The Interpretation of Dreams," Freud's seminal work and the founding document of psychoanalysis, to bring you a special bulletin. Dreams are not, after all, depraved desires in disguise. We now have direct human evidence that what dreams are really about is something entirely respectable: learning.

Neuroscientists at several institutions in Belgium and Canada report that patterns of brain activity in people as they learn a task are replayed while they sleep. It's the first visual explanation for why both animals and people learn better if they sleep on it. The research, published in the August issue of the journal Nature Neuroscience, appears to demonstrate the reason that people perform better on a test if they study the day before, instead of cramming at the last minute. Their brains are efficiently using sleep time to practice, practice, practice.

"It's the first to show that a particular part of the brain involved in learning is active after you learn," says Sean P.A. Drummond, a psychiatry professor at the University of California at San Diego, who has used brain imaging to study how sleep deprivation impairs people's ability to learn.

Using the brain imaging method called positron emission tomography, or PET scanning, scientists observed the brains of study subjects as they slept after learning what neuropsychologists call a "reaction task." (They pressed buttons in response to symbols flashed at them.) There are several studies showing that both lab animals and people get better at this kind of thing after a night's sleep. These subjects did too.

But the PET scans went on to show, for the first time, that their brain activity patterns during sleep were quite similar to the patterns generated when they were awake and learning the button-pressing routine. The scientists concluded that the sleeping brain was probably stabilizing and strengthening memories of the task via something like a series of instant replays. In a word, it was practicing.

These brain patterns manifested themselves only during that stage of sleep known as REM (for rapid eye movement, because your eyes dart madly around beneath your lids at this sleep stage). REM sleep happens four or five times a night, and folklore has it that dream time is REM time. The truth is that dreaming goes on all night, at every sleep stage. But REM sleep dreams do tend to be our most vivid and memorable, and are probably more frequent than other dreams.

"We can see exactly where this extra activity is, and it happens only during REM sleep," says one of the study's authors, Carlyle Smith, a psychology professor at Trent University in Peterborough, Ontario. "These people show great improvement when you test them the next day. What else could that extra neuronal activity during REM sleep be about? It's only in the group that learns, exactly what you'd predict you would see."

Late in his career Freud himself seemed to lean this way. He was constantly revising "Dreams," and in a 1925 update he veered away from emphasizing dream content to declare: "At bottom, dreams are nothing other than a particular form of thinking, made possible by the conditions of the state of sleep." That is not so different from what many sleep researchers say now. They tend not to speak of dreams; the term they often use is "mentation."

Although neuroscientists have long sneered at Freud's notions, they do not agree among themselves what dreams and REM sleep are for. The idea that they are related to learning and memory is just one of several theories. (Let us eschew discussion of dreams as portents, despite divination's 4,000-plus years of history and the steady stream of dream books that continue to advise on existential crises and selection of lottery numbers.)

Another hypothesis presents REM sleep as a way to process negative emotions. A Finnish researcher proposes that dreams are a protective mechanism that arose long ago in evolution as a way to simulate threatening events and rehearse possible responses. A group of Harvard researchers has long argued that dreams are meaningless; they are simply our desperate attempt to make sense out of random discharges from the most primitive parts of the brain, to weave them into something like a coherent story line.

Gina Poe, who studies learning and sleep in rats and directs the undergraduate neuroscience program at Washington State University, signs on to the memory consolidation idea, but suspects that memories are also deleted during REM sleep; we may be getting rid of an unnecessary duplicate copy of some memory we have shipped off to our permanent archives.

It is entirely possible that each of these (except divination) is at least partly right. "This study does provide evidence for the memory-consolidation hypothesis specific to REM sleep, but that is not mutually exclusive with any of the other theories," says Drummond. "However, teasing apart and getting to the relative contribution each may make to the truth is going to be very difficult -- if it is possible at all."

The reaction-time test the researchers employed is primarily a test of motor skills -- muscle memory. It's a task not unlike learning to touch-type. At first you have to think about what you're doing, but with a little practice, your movements quite soon bypass consciousness and become automatic.

Would the results be similar if researchers could figure out a way to watch REM sleep after the sleepers were exposed to higher-level learning, especially verbal learning such as lists of words or a new language? Both Drummond and Poe suspect that the answer is yes, but it needs to be nailed down. "This is a very nice first step," Drummond says. "To really link memory consolidation to REM sleep though, we need to replicate this with higher, more complex, language-based learning." Confirming that point will not be easy technically. But it is a pretty important question in our famously information-driven society.

There are satisfying hints in the research literature that confirmation is likely to be forthcoming eventually. Joseph De Koninck, a psychology professor at the University of Ottawa, has studied students in intensive total-immersion language courses. De Koninck's subjects quickly increased the amount of REM sleep they got, and the students who were doing the best increased their REM sleep the most. People learning a new language commonly dream they are speaking the language, and, most intriguing, the good students in this study began to have those dreams sooner than their less able classmates. De Koninck believes that dream content is not itself involved in learning, but rather mirrors the degree of competence the dreamer has achieved.

The next step, Poe suggests, would be to pair a PET learning study with studies of REM sleep deprivation -- and enhancement. Yes, it is possible to enhance REM sleep. Increase the surrounding temperature, and/or deliver certain auditory tones that have been shown to lengthen and intensify REM sleep. (Musicians take note; there's an unoccupied niche here.)

Could we boost learning by increasing REM sleep? It's possible, Poe says cautiously. However, heed her warning: "There might be a threshold above which you've spent too much time in REM sleep. You may be erasing too many things."

What to do until the scientists sort all this out? Don't pull all-nighters. Don't bother cramming just before a test. Study hard, but stay warm and get a good night's sleep. In short, listen to your mom.